I have to admit that when I first looked at the box for Channel Surfing it doesn’t look like much. A game that you play while watching TV? The game looked like a gimmick that Milton Bradley made to make a quick buck. The main reasons why I decided to pick up the game was because it was really cheap and it was unlike any other game that I had ever played. I didn’t have high expectations for it though. While Channel Surfing is far from a great game, it is a unique experience that you can get some enjoyment out of.

How to Play Channel Surfing

If twelve cards have not already been put on the tray, randomly select twelve cards and add them to the tray before starting the current team’s turn. All of the players on the active team will read through the cards so they know what they will be looking for once their turn begins. A player on the verifying team sets the timer and starts it when the other team is ready. 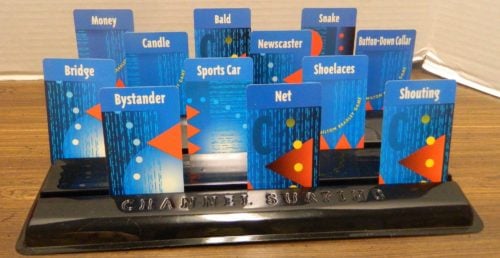 For this round the current team has to try to find these twelve items on the television.

Once the round begins the active team needs to find instances of their cards on the TV. One player controls the remote and can change the channel at any time. The team cannot find any of the items from the channel that they start their turn on unless they change the TV to another channel and then change it back. When one of the players from the active team finds one of the cards, they yell out what they saw. The verifying team can approve or deny the answer. If the answer is approved the corresponding card is removed from the rack. If the verifying team denies the answer the other team can argue their case (while the timer continues to run) or move on.

In addition to taking the word on the cards literally, players can get creative with the words and what they see on the TV. If a word has multiple meanings, the players can use any of the meanings when looking for things that match. When there are multiple words that sound the same but are spelled differently, you can use the other spellings of the word to claim the card. Finally you can use the audio on a channel to claim cards.

When the timer runs out the active team counts up how many cards they collected and they score that many points. All of the cards are removed the rack and new cards are added for the next team’s turn. 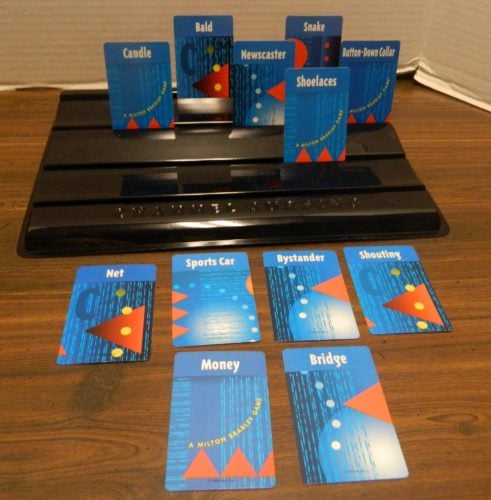 In this round the team claimed six of the cards so they scored six points.

The game ends after both teams have had three opportunities as the active team. Whichever team has the most points wins the game.

My Thoughts on Channel Surfing

I think the best way to describe Channel Surfing is to basically call it a TV scavenger hunt. You are given a set of cards with words printed on them. Each team then has a given amount of time to surf through channels trying to find the items listed on their cards. When the team finds one of the items they take the corresponding card and score a point for finding the item. That is basically the entire premise of Channel Surfing.

While it might not look like much I have to say that I was kind of surprised by Channel Surfing. Before playing the game I never thought a board game that involved watching TV would be anything more than a gimmick. The premise behind the game might sound a little stupid but it is actually kind of clever once you start playing the game. For some reason the game can actually be quite a bit of fun. There is just something enjoyable about surfing through the channels as quickly as possible on a scavenger hunt trying to find random objects. It is not something that I would play all the time but I could see playing it every so often.

Since all you basically do in Channel Surfing is switch between TV channels to find random items it is not surprising that the game is really easy to play. I honestly think you can explain the entire game in around a minute to a new player. I don’t see anyone having trouble playing the game so I don’t really understand the recommended age of 12+ as there is nothing questionable in the game. As long as you avoid adult channels I don’t see why younger children couldn’t play Channel Surfing.

Along with being easy to play Channel Surfing is around the right length. Most games of Channel Surfing should take around 30 minutes. The timer gives each team three minutes so each round should take around 10 minutes. While I think 30 minutes is the right length for Channel Surfing, I think the game should have broken the game up into more rounds. Three rounds just doesn’t seem like enough. The problem with a three minute timer is that you usually don’t find much at the end of the timer as after around two minutes you are frantically switching channels hoping to randomly stumble upon one of the items. I think the extra time would have been better used to add more rounds to the game.

While it is not surprising that there is little strategy in Channel Surfing, some players could have a pretty significant advantage in the game. The most valuable information in Channel Surfing is knowing the channel numbers for the TV that the game is being played on. The team with the player that knows the most channel numbers has a significant advantage. For example if you are looking for something sports related it is a good idea to immediately switch to ESPN or another sports channel. Having knowledge of various shows can also provide an advantage as you are more likely to know the likelihood that a given item would show up on the show. While a knowledge of the channels is not going to win the game for a team, it does a pretty good job minimizing the luck of having to randomly run into a channel that has the item you are looking for.

I would say that the biggest problem with Channel Surfing is that it is a product of its’ time. Back in 1994 Channel Surfing probably worked quite well. The problem is that things have changed quite a bit in the past 23 years. First you actually need a TV in order to play the game. While most people still have a TV, a lot of people are starting to move away from traditional TV and to streaming services/the internet. As more and more people turn away from traditional TV there will eventually be less and less of an audience for the game as the whole premise of the game is probably ruined if you try to play it with a streaming service. In order to get the most out of the game you likely need cable or satellite since I can’t see the game being very enjoyable with only three or four channels. With only a couple channels you will be constantly flipping through the same channels over and over again which will make it pretty hard to find many of the cards in any given round.

The problem is that technology changes have made cable and satellite not as useful either. A lot of cable and satellite services have started to use digital signals for the channels. This creates some problems for the game as it takes a while for each channel to load. While this doesn’t ruin the game it does waste precious time. The game was designed around the idea that you could quickly flip through the channels trying to find specific objects. Having to wait a few seconds for each channel to load does kind of kill the mood at times. Instead of being able to rapidly change channels you might be better off sticking with a channel instead of wasting time waiting for a channel to load.

Other than Channel Surfing being kind of outdated due to technological and cultural changes, the biggest problem could be that some of the cards are going to prompt arguments. The problem is that a lot of the cards can be pretty subjective. For example one of the cards has the players find a “fool”. Two players opinions of what a fool is can vary pretty significantly. The current team is going to be pretty lenient on who they call a fool while the verifying team is going to be pretty strict on who they consider a fool to prevent the other team from scoring points. While Channel Surfing is meant to be a laid back game that you just play for fun, I can definitely see competitive people getting into a fight over whether an answer should be counted or not.

The final complaint that I have with the game is that there really isn’t all that much to the game. You basically get a three minute timer, 236 cards, some score sheets and a card rack. That is not a lot of components especially considering the size of the box. There is nothing particularly wrong with the components but with so few components it wouldn’t be that hard to make your own version of the game. I actually think it would be kind of interesting to have players make their own cards. I think players could have a lot of fun using cards that utilize inside jokes or even players’ favorite television tropes.

Should You Buy Channel Surfing?

When I first saw Channel Surfing I saw a very generic Milton Bradley game. How interesting could it be to play a game that requires you to flip through television channels in order to find specific items in a digital scavenger hunt. I was actually a little surprised that I enjoyed the game quite a bit more than I was expecting. Channel Surfing is far from a groundbreaking board game but there is just something satisfying about surfing through the channels trying to find specific items. Channel Surfing has developed some issues though based on how technology and tastes have changed since it was originally released. The game could also lead to some arguments when the two teams have differing opinions on whether an answer should count or not.

If you would like to purchase Channel Surfing you can find it online: Amazon