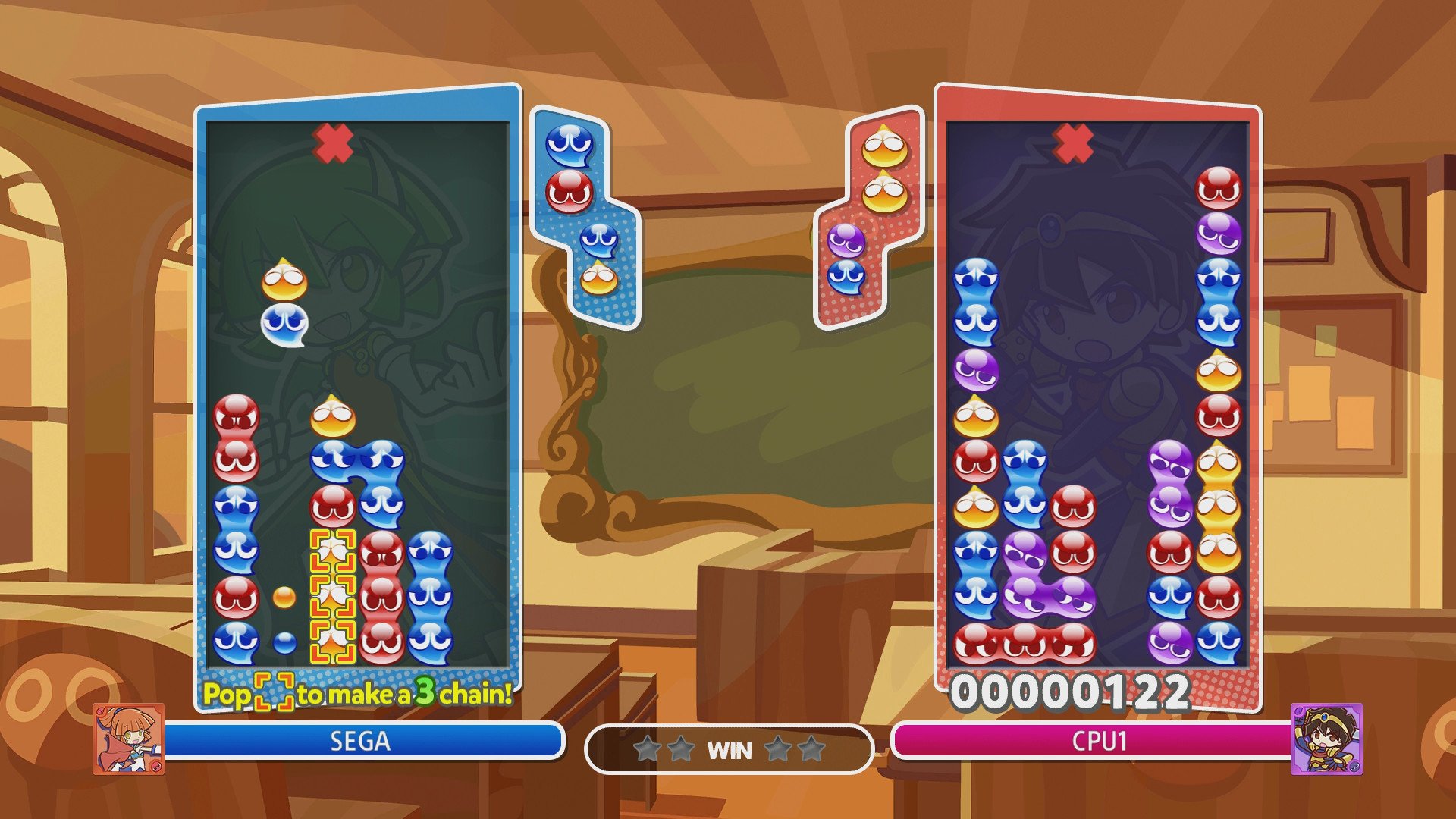 It might not have been the smartest idea to make my first ever Puyo Puyo game one with the word “Champions” in its title. I am a complete noob when it comes to the Puyo Puyo series, having never played a single game in the almost thirty year old series before Puyo Puyo Champions was released earlier this month. However, I love puzzle and tile-matching games and am usually really good at them. Obviously I’m not a Dr. Mario savant and I wouldn’t stand a chance in a Tetris championship, but the puzzle/tile-matching game genre is one of my best in terms of my skill level. I usually can pick them up, play them for thirty minutes or so, and already start to dominate the game. Puyo Puyo Champions, on the other hand, might be the hardest game in the genre I have played. That isn’t necessarily a bad thing (games that challenge you are usually some of the best), but this was the first game in the genre that I actually had to look up how to play because of its unique mechanics relying more on chaining together clears than keeping your board clean.

Puyo Puyo Champions is predominately meant as a competitive online multiplayer game. However, I do think the game sells itself slightly short as the local multiplayer and single-player modes are good enough as well if you don’t enjoy playing online. Like in all Puyo Puyo and most other tile-matching games, the goal of the game is to match four or more Puyo of the same color. Unlike other match-four games though, they don’t have to be in a straight row either vertically or horizontally, they can snake into multiple lines. As long as the four Puyo are connected in some way, they will clear. In Puyo Puyo Champions (and all other Puyo Puyo games) the goal isn’t just to keep your board clean though, you actually want to deliberately messy it up as you will need to rely on chains if you want to stand any chance of even beating the easiest A.I. This game is heavily chain-based. One good chain could eliminate your competitor almost instantly due to the amount of trash long chains dump on your opponents. Puyo Puyo Champions offers both the Puyo Puyo 2 and Puyo Puyo Fever modes of playing. Puyo Puyo 2 is a pretty basic mode while Puyo Puyo Fever adds even more elements to make the game even more difficult to master.

The only problem I have with Puyo Puyo Champions is that it assumes that you know what you are doing. It will tell you the basics of the game, but not really anything else. I can’t really blame the developers too much though as the name of the game is Puyo Puyo Champions after all. The first time I played the game I was getting wrecked by even the easiest computer players because I had no idea how important chains were (I was just focused on clearing my board). I actually had to do research on YouTube to figure out how to make good chains. For novice players like me, I have found that purposely filling your two furthest right columns is by far the best strategy. You then use the middle lines to clear those columns and hope and pray that they fall into chains. There are obviously much better strategies than that but considering how far you have to think ahead to design long chains, it’s a lot harder to master than something like Tetris. This could be either a good or bad thing depending on what type of gamer you are. If you like simplicity and just want to feel fulfilled by the sweet satisfaction of clearing rows while not having to think too much, just stick with Tetris, Bejeweled, and the like. If you want something that is much harder to master and requires you thinking about ten steps ahead, Puyo Puyo Champions might just be the game for you.

After I learned how to play the game correctly though, I had a lot of fun with Puyo Puyo Champions. As I’m not a huge online gamer (outside of Rocket League), I mostly just played the single-player modes (including the endurance mode where you try to eliminate as many A.I. players as possible before you are eliminated yourself) and the couch multiplayer with my brother for this review but I still had a lot of fun with both. Even though the game is meant mainly for online players, you don’t have to play online to get your $9.99 worth. The A.I. is challenging enough to play against at the low levels and you can make them much tougher if you want. The computer players likely won’t give seasoned Puyo Puyo players a challenge but for casual and novice players like me, they are quite difficult to beat. One thing I definitely want to note is that Puyo Puyo Champions offers you countless ways to customize the game. Pretty much everything in the game can be customized from regular things like the A.I.’s difficulty to things that completely change the gameplay like the garbage rate (how much garbage drops from completing a chain) and the “Puyo pop limit” (how many Puyo you need to pop a group, this can be as little as two or as many as six). There’s a lot of game here and I barely even played the online mode which is the game’s biggest draw.

While I had a bad first experience to Puyo Puyo Champions, once I figured out what I was doing I found it to be a more complex and difficult to master Tetris-like game. I do think I prefer the more simplistic games in this genre and will likely play a game like Tetris 99 more than this but when I want a more difficult game in the genre, I will certainly pick Puyo Puyo Champions back up. Fans of the series will love this new release in the series and I would also recommend it to those who love tile-matching games but want something a little more difficult to master.