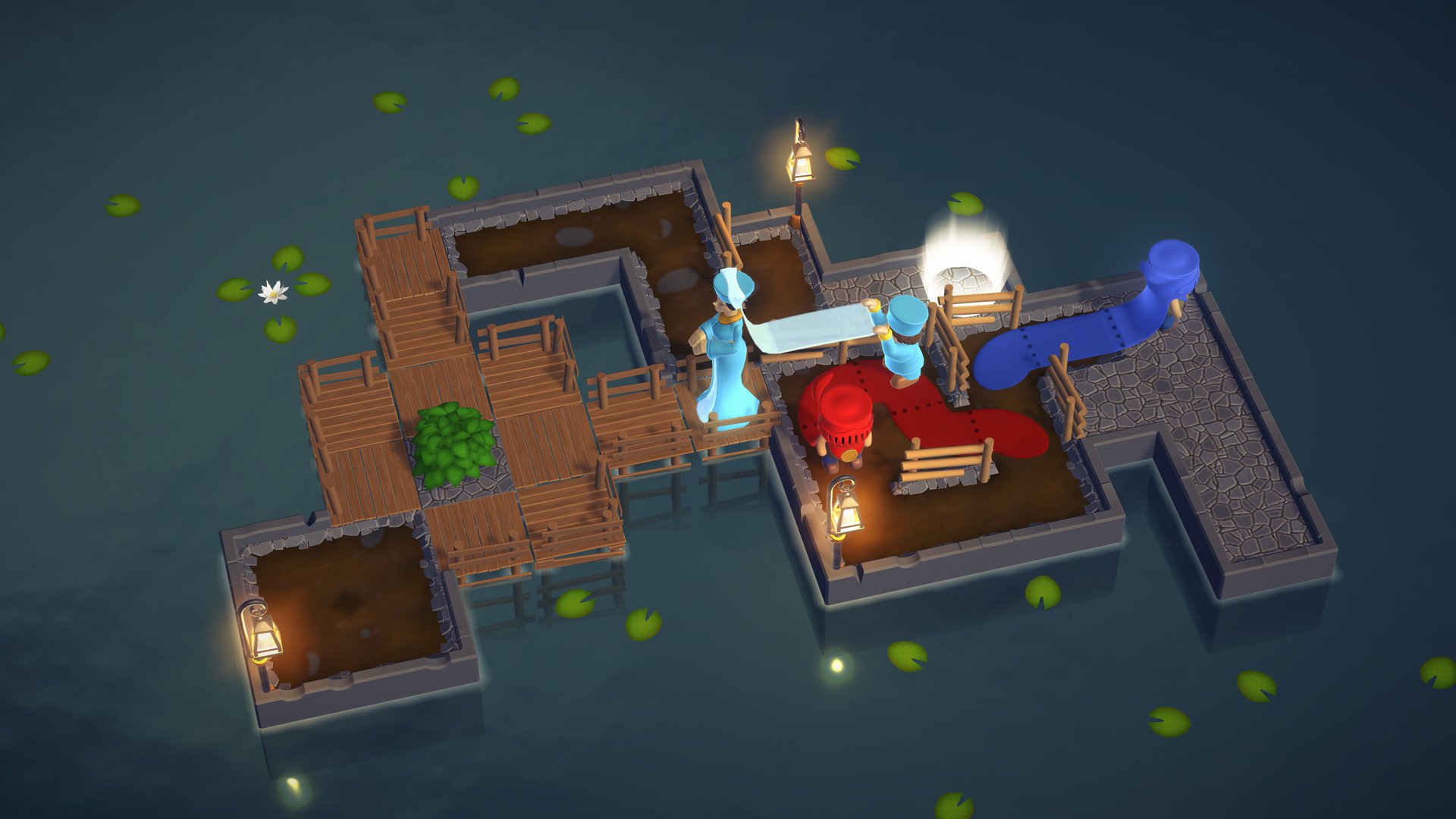 Regular readers of Geeky Hobbies will know that I am a sucker for puzzle games. Outside of possibly platformers it is probably my favorite video game genre. There are quite a few different types of puzzle games though which play quite a bit differently. One of the more popular types of puzzle games are what I refer to as slide puzzle games. These games have you control one or more characters on a grid. The objective is to move them in a very specific way in order to reach your final destination. While not my favorite genre of puzzle game I still enjoy games from this subgenre as they usually have really clever puzzles. This brings me to Puddle Knights. When you first see Puddle Knights the game seems really silly as you are using knights to cover mud spots for nobles that don’t dare get any mud on their clothes. Hidden underneath a silly but charming theme Puddle Knights is a surprisingly deep and enjoyable puzzle game that should delight puzzle game aficionados.

In Puddle Knights you play as a group of heroic knights. Most knights are tasked with keeping their citizens safe from dangerous outside threats but these knights might face the most greatest enemy of all, mud. It turns out that your kingdom is dealing with a slight mud problem and that won’t do for the nobles of your kingdom. They don’t dare step in or move around the mud to get their destination. Thus your group of knights is tasked with using the capes on their backs to make a path through the mud so the nobles can get to their destination without having to fear getting any mud on their shoes/clothes.

With one look at Puddle Knights it should be pretty obvious that it is a puzzle game. The game is broken down into levels with the objective of each level being to get the noble to the exit location. In each level you are given control over one or more knights as well as a noble. The levels are broken down into a grid where you can move the characters one space at a time. The knights can move on any space without an obstacle on it while the nobles can only move on spaces that don’t have any mud on them. Thus you must use the knights’ capes to make a path over the mud so the nobles can get to their destination.

This might seem easy but there are a few catches. First the knights may only move forward or to the sides with their cape trailing behind them. This in addition to the various obstacles spread around the levels limits how you can move through the levels. You need to move the knights in a precise way in order to position them properly to cover up the mud spaces that get in the nobles way. Second when a noble stands on a knight’s cape the knight can no longer move. Thus you need to position the knight(s) in a way that the noble can move to dry land before you can move the knight again.

What really adds to the challenge are the additional mechanics that are added as you progress through the game. The levels are broken down into seven “worlds” with each world adding a new mechanic to the game. You might begin by just covering up mud spaces but your abilities expand significantly throughout the game. Some of these new mechanics include using your knights’ heads as platforms that other people can step on, tearing off parts of your cape to permanently cover a space, having to deal with draw bridges, and a few other mechanics. The main gameplay may stay the same throughout the game, but these new mechanics add new wrinkles to the puzzles.

If I were to describe the gameplay in Puddle Knights I would say that it probably most closely compares to a slide puzzle. The gameplay mostly revolves around figuring out how to manipulate the position of the characters in order to create a path for the noble to reach their destination. This subgenre is pretty popular in the puzzle game genre as I have looked at several games in the past with similar concepts: Friday the 13th: Killer Puzzle, Kine, Mystery Castle, and Slayaway Camp. In a lot of ways Puddle Knights is similar to these other games. All of these games are about manipulating the positions of characters in a specific way in order to reach a specific destination in the grid. The same holds true for Puddle Knights. While the main gameplay is very similar to a lot of games in this subgenre, it also has its own unique little twists that make the game unique. Using character(s) to create a path for another character is one example. The additional mechanics you unlock throughout the game also add some fun little twists to the typical gameplay.

Like a lot of the games from this subgenre I really enjoyed playing Puddle Knights. The game is clearly not going to be for everyone though. If the idea of moving characters around on a grid to find the right movements to reach your goal doesn’t sound all that interesting, Puddle Knights is not going to be for you. People who like these type of games though should have quite a bit of fun with Puddle Knights. Like the best games in this genre Puddle Knights thrives because the puzzles are quite good. There are a few puzzles that are quite straightforward, but most of them require you to think outside the box. Many of the puzzles have very specific solutions which requires creative movement of your characters. The solutions might escape you at first, but this leads to you having a sense of accomplishment when you solve them.

Speaking of difficulty I would say that Puddle Knights feels fair most of the time. Most of the levels feel challenging, but not so challenging that they become frustrating. These levels require thinking and careful planning, but you should figure them out pretty quickly. This is helped by the fact that the game includes a convenient undo button that reverses your last move as well as a restart button that returns the level to the beginning positions. These buttons allow you to experiment and quickly reverse your moves allowing you to find solutions quicker. Most of the levels are fair, but there are the occasional levels that are either too easy or too difficult. Every so often you will encounter a level that you solve almost immediately. Then there are the levels that take a long time to figure out as you can’t find the little twist to the level that is needed to solve it. The easy levels are a little disappointing and the hard levels can be a little frustrating. These levels don’t come up all that often though so they aren’t a big problem.

I think part of the reason why the game doesn’t have as many frustrating levels as many of these type of games is that the developers were smart to break up the levels into two different types. Basically each world has two sets of levels. First there are your main levels which you have to complete in order to progress through the game. After you have completed all of the main levels in a world though you will unlock the bonus levels. These are usually the harder levels which involve further utilizing twists used in the other levels. These are generally the hardest levels in each world even though most of the ones that I have played are easier than I expected. I really liked this decision to split the levels as it allowed the game to have hard levels without forcing players to complete them in order to progress through the game. Therefore players that don’t want to deal with these hard levels can ignore them while players that want a challenge can try to beat them. I think a couple of the main levels maybe should have been moved to the bonus levels, but otherwise I really liked this decision.

Other than the clever and challenging levels I also liked Puddle Knights overall atmosphere. I will admit that the game doesn’t have much of a story outside of a twist in the final level. This was kind of a missed opportunity as I think the story could have been pretty funny. Otherwise I think the game’s atmosphere is quite good. I liked the game’s graphical style and the overall theme of the game. I found the game to be quite cute/charming. For this reason I think the game can be enjoyed by the whole family. The puzzles will likely be too challenging for younger children, but I think older children and adults could really enjoy Puddle Knights if they like this type of puzzle game.

As for the game’s length it will depend on how good you are at these type of puzzle games, but the game should be quite long for most players. The game includes a total of 56 main missions and around 40-50 bonus missions. The length of the puzzles depend on how fast you can solve them. If you knew the solutions to the puzzles you could probably finish them in less than a minute. For those who aren’t consulting guides though you can expect the level lengths to vary at times. The easy to moderately difficult levels may take a couple minutes to maybe ten minutes to complete. When you encounter one of the really difficult puzzles though you could end up spending a lot of time trying to figure them out. Unless you consult help you could spend thirty minutes or more solving some of the puzzles that you just can’t quite get the solution to. Depending on your skill with these type of puzzle games you could probably get 5-9 hours out of the main levels. When you add in the bonus levels you could get considerably more time out of the game. Basically if you like these type of puzzle games you should have no trouble getting your money’s worth out of the game.

The premise behind Puddle Knights might be pretty silly but under the surface it is a surprisingly deep puzzle game. In a lot of ways the game is similar to your typical slide puzzle game as the main gameplay revolves around moving the characters in specific ways in order to get them to the final destination. In the case of Puddle Knights your objective is to cover up the mud so the nobles can get to their destination. As you proceed through the game you will unlock additional mechanics which give you more ways to get past the mud that gets in your way. Like many of the best games in this subgenre of puzzle games Puddle Knights succeeds because it has great puzzle design. The puzzles require you to think outside of the box which gives you a sense of accomplishment when you finally complete a level. The difficulty is fair for the most part even though there is the occasional level that is too easy or difficult. With a charming atmosphere though Puddle Knights is a game that fans of these type of puzzle games should really enjoy.