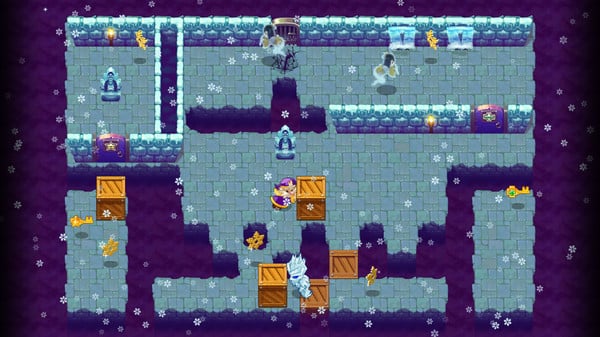 In Mystery Castle you play as the semi-inept wizard Monty. Evil has invaded the land and Monty has to save it. Mystery Castle is a traditional puzzle game (reminiscent of 8 and 16 bit puzzle games) where you need to move around the environment collecting the special items to open up the exit. The game slowly introduces new mechanics including:

Mystery Castle contains 180 different levels. At the time of writing this review I have completed a little over 80 of the puzzles. Therefore the review is based on the first half of the game.

Overall I have been enjoying Mystery Castle. I generally like puzzle games and Mystery Castle is a good puzzle game. Some of the early mechanics are not highly original like the bombs, boxes, ice and crumbling floors. The game does a good job using these mechanics in some interesting ways though that makes for a good puzzle game. The puzzle design is very good with some of the puzzles forcing you to really think outside the box. As you get further into the game more original mechanics are added to the game which makes the game even more interesting.

Most of the puzzles in the game are normal puzzles where you just need to collect all the treasures and make your way to the exit. There is no time limit on these levels and the only way you can lose is by either getting stuck in an area and not being able to proceed, running into an enemy or falling down a hole. These levels are laid back allowing you to take your time to solve them.

Mystery Castle includes a couple special types of puzzles as well. Occasionally you will be presented with a race puzzle where you need to race through the level as quick as possible in order to reach the exit before an enemy does. This is an interesting twist on the normal levels and I think it is a good change of pace. These levels do require almost perfect timing though so they could be frustrating if you have to keep repeating them because you weren’t quite fast enough.

Each world also ends with a boss fight puzzle. Of the boss fights that I have completed so far, the basic premise is that you need to hit the boss with the three bombs that are placed in the level. You can take as much time as you want since the enemy doesn’t attack you. What I like about the boss levels is that the solutions are quite creative and your first idea of how to solve them is usually not even close to the correct way to solve them. These levels usually require quite a bit of trial and error.

Difficulty wise I would say that the game is moderately difficult. The first puzzles in each world are usually very easy. This is to be expected as it helps teach you the new mechanics of the world. A lot of these puzzles can be solved on your first attempt since the solutions are pretty obvious.

The majority of the puzzles are what I would classify as moderately difficult. The solutions to these puzzles aren’t immediately evident but you can solve them pretty easily if you think them through. Generally you will have to play the levels a few times using trial and error to work out the proper steps to complete a level.

Finally some of the puzzles are quite difficult. They aren’t impossible and once you solve the puzzles you will ponder to yourself why it took you so long to solve it. What makes some of these puzzles challenging is that they lead you toward trying to solve the puzzle in a specific way when there is a much different way that you have to solve it. Generally the obvious solution is not the correct solution in these circumstances and once you work past the obvious solutions these puzzles become easier.

As a whole the difficulty level is pretty well balanced in Mystery Castle. The game has some easy levels to teach you some new mechanics. Most of the levels are moderately difficult that give you some challenge but are not overwhelming. Finally there are some hard levels that will get you really thinking. If you don’t play a lot of puzzle games you might find the hard puzzles to be too difficult but you don’t have to complete every puzzle to proceed so if a puzzle frustrates you, you can skip it. Puzzle experts will probably find a lot of the levels to be pretty easy but they should still be somewhat challenged with the more difficult levels.

Mystery Castle does a good job with its’ mechanics. The game introduces the mechanics at a slow pace so it doesn’t overwhelm you by constantly throwing new mechanics at you. I kind of wish the game would throw new mechanics at you a little quicker though. The controls for the most part work well even though I occasionally ended up moving Monty further in one direction than I wanted which forced me to reset some puzzles. Just be careful to stop moving ahead of time and you shouldn’t have any issues with the controls.

I would say that the weakest part of Mystery Castle is probably the story. The story is not bad but it isn’t a reason to specifically play the game either. The story is pretty cheesy and thinks it is funnier than it was in my opinion. The story kind of feels like it was written for children and yet I think quite a few of the puzzles will be too difficult for younger children to solve. Stories generally aren’t that important in puzzle games though so I don’t think it is a reason not to purchase the game.

Mystery Castle is going to represent a good value for your money if you like puzzle games. As I already mentioned I have completed almost half of the puzzles at this point. I have played the game for around eight hours. Most of the puzzles I went through pretty quickly but I did get stuck on some puzzles so people who are really good at these type of puzzle games will take less time than I have. If the level of difficulty doesn’t ramp up significantly by the end of the game, I would guess that the game will take around 15 hours to complete depending on the players puzzle solving abilities. At $9.99 that means you are paying less than $1 per hour.

If you would like to purchase Mystery Castle you can purchase it on Steam here.