Insert the DVD into your DVD player. Place the gameboard where everyone can reach it. Each player chooses a playing piece and places it on the corresponding spot on the gameboard. Players choose which side of the puzzle that they will put together and then they start the DVD. All of the players roll the die with the highest roller getting to go first. 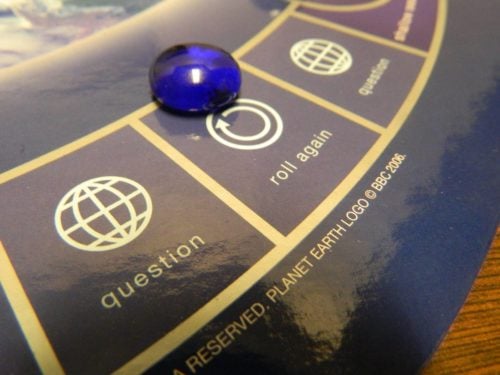 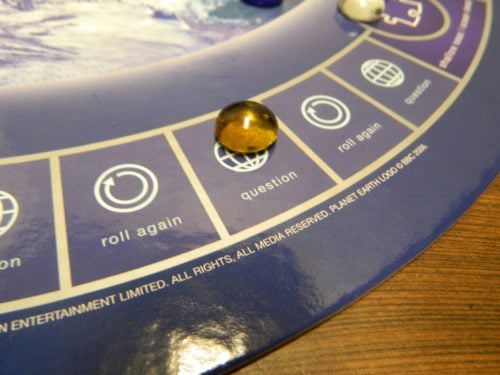 Question Space: Select “Planet Earth question” on the DVD and the current player answers the question presented by the DVD. If the player answers correctly they get to roll the die again. If they answer incorrectly, play passes to the next player clockwise. 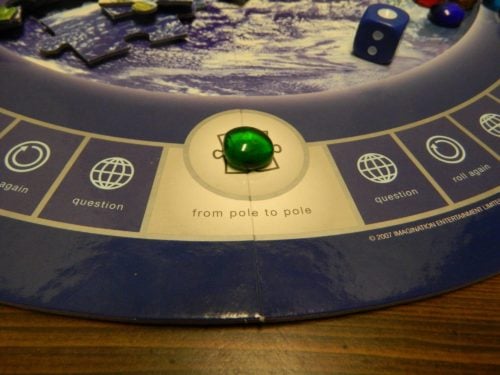 Puzzle Piece Space: The player selects the option on the DVD that matches the space that their playing piece is on. The player answers the question presented by the DVD. If the player is correct they will get to take the number of puzzle pieces indicated by the DVD. If they are incorrect they will receive no puzzle pieces. With either outcome, play passes to the next player clockwise.

I am going to get right to the point and say that The Planet Earth DVD Game is a terrible board game. Outside of the Apprentice DVD Game it might actually be the worst trivia game that I have ever played. At its’ core it is a very generic trivia game where you move around the gameboard answering various trivia questions. It actually reminds me a lot of Trivial Pursuit without any of the fun.

If the mechanic itself wasn’t bad enough it makes it hard to even create a house rule to circumvent the terrible end game. At first you might think that you could just give the victory to the player who received the most puzzle pieces. The problem is that won’t work either since the game seems to reduce the number of puzzle pieces you get for each correct answer until you are only receiving one puzzle piece for the last four or five questions. Basically the only way to play the game like a normal trivia game would be to keep track of how many questions each player gets right during the game.

While the terrible end game really hurts the game, it could have still been saved if it had other good mechanics. Unfortunately none of the mechanics in the game are very good. The basic framework of the game is exactly like Trivial Pursuit. This is not a good thing since I think the actual gameplay in Trivial Pursuit is not very good. Basically all you do is roll the die and move your piece around the gameboard which is quite boring. The Planet Earth DVD Game finds a way to mess this up since rarely will your decision on how to move your piece ever really matter. Due to how the board is designed you can only roll two numbers each turn that will land your piece on different spaces. Otherwise no matter which direction you move your piece you will land on the same type of space. Since these two numbers will land you on one of the puzzle piece spaces you are always going to choose to move to that space so there really is no decision making in the game.

So with the gameplay mechanics being terrible you are left hoping that the trivia itself is good. The trivia has its’ own issues but is by far the best part of the game. I will give the game some credit here as some of the trivia is actually pretty interesting. The Planet Earth DVD Game actually does a really good job with the presentation as the game utilizes footage from the TV show. I actually think the presentation is the game’s best quality as anyone who has seen Planet Earth knows that the video footage from the show is stunning at times.

While the trivia is good at times, it still has its’ own issues.

First I am curious about how many questions are actually included in the game. I only played the game once but in that one game I already encountered one repeat question. Maybe we got unlucky and somehow got a repeat question really early but I don’t think any trivia game should have players repeating a trivia question in the first game. In the game we probably only answered 15-20 questions so if a repeat comes up in those few of questions I have to believe that there aren’t that many questions in the game. With the trivia being the best part of the game, not having a lot of trivia questions is not good.

The next problem with the trivia questions is that the difficulty varies significantly. Some questions are quite obvious while with others you will basically have to guess unless you happen to be an expert on the topic. The worst questions involve guessing the correct quantity of something. The problem is that a lot of these questions are quite specific. Unless you know a lot about the topic you likely will have to just take a guess. While you can usually rule out one of the answers, you are left having to guess between the other two answers.

The final problem that I had with the trivia questions is that there is no followup on the questions. The game never gives you more information after revealing the answer. With the game utilizing a DVD it could have easily had a small video segment run after the question which would explain the correct answer or why the other answers were wrong. I have never been a fan of trivia games that give you a question with no follow up on the correct answer.

So on top of all of these other issues the Planet Earth DVD Game takes way too long. When you first begin playing the game you think it is going to end pretty quickly as the first correct answer will get you around five puzzle pieces. The problem as I already mentioned is that the game gives you less and less puzzle pieces for each correct answer. This eventually leads to only getting one puzzle piece for each correct answer. This makes the game feel like it is never going to end. While the game might have been okay at around 20 minutes, the game ends up taking 30-45 minutes. At that point you will be begging for the game to end.

Before playing the Planet Earth DVD Game I was hoping that it would be a solid trivia game. With access to video from the award winning television show I thought the designers could design a solid trivia game. Unfortunately basically every mechanic in the game is a disaster. The game might have the single worst end game I have ever seen in a board game as it makes all but the last question totally pointless. In addition the game adds a boring roll and move mechanic and a puzzle mechanic that adds nothing to the game. The only somewhat redeeming quality is the trivia questions which utilize the amazing footage from the show. Unfortunately the trivia questions also have problems as the difficulties vary significantly, there doesn’t seem to be that many questions, and the game fails to give you any additional information after answering questions.

I honestly have a hard time recommending the Planet Earth DVD Game to anyone. If you are interested in the topic I would honestly recommend just watching the television show since you will get a lot more out of it than you will from this game. The only way I would ever recommend the game is if you can find it for really cheap and the game’s theme really appeals to you.

If you would like to purchase the Planet Earth DVD Game you can find it online: Amazon