How to Play Picture Pursuit

Picture Pursuit is played over a number of rounds. A player from the non-starting team will be chosen as the moderator. In each round the role of moderator will switch between teams. The player chosen as the moderator will sit out the round and will read the cards. The moderator will tell the players whether the next puzzle card features a who, what, where, or ?what puzzle. ?What puzzles require players to determine what word fills in the blank for the rest of the phrases on the card. The other types of cards require the players to guess what the picture is showing or what all of the words/phrases describe. 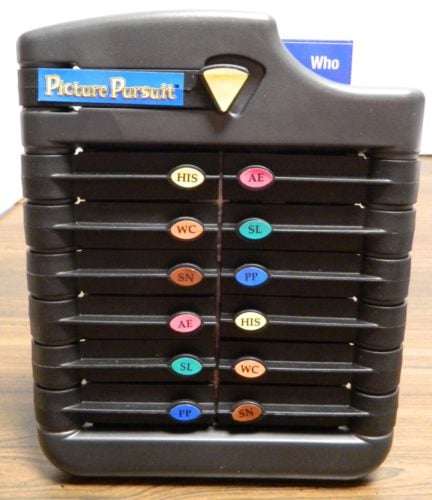 For this round the players will be guessing a who.

The moderator then chooses one of the Q&A cards. The current team will choose their category and the moderator will read the corresponding question. After they finish reading the card they will turn over the 30 second timer. The players on the current team have 30 seconds to discuss and pick their answer. The players must submit their answer before the 30 seconds are up for it to count. 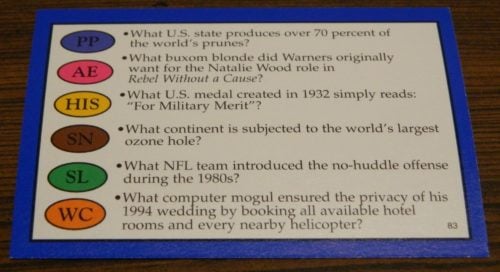 This question card was chosen for the next question. The moderator will read the question corresponding to the category chosen by the current team. 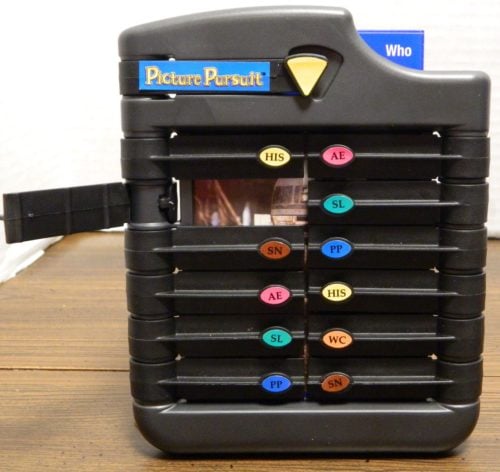 The team correctly answered the Wild Card question. They opened one of the corresponding doors revealing part of the picture below.

When a team thinks they know the solution to the puzzle behind the puzzle holder they can make a guess. The moderator will secretly check the answer by using the top door on the holder. If the team guessed incorrectly play will pass to the other team.

If the team guessed correctly they will earn one chip. 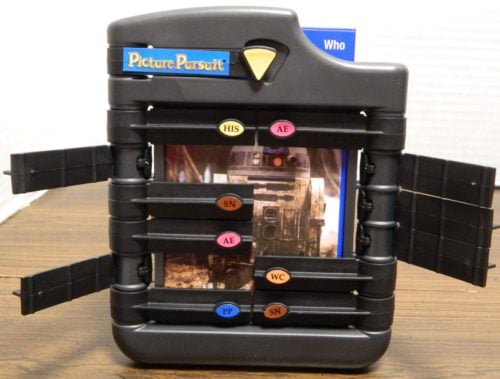 Based on the portions of the picture that have been revealed one of the teams guess R2-D2 which is the correct answer.

If all of the doors for the puzzle have been opened and neither team can solve the puzzle, the round will end with neither team receiving a chip. The card will be replaced with a new puzzle. The role of moderator will move to a player on the other team.

The first team to earn six chips wins the game.

My Thoughts on Picture Pursuit

Being developed by the creators of Trivial Pursuit there were some things that I naturally expected out of Picture Pursuit. As the game is also a trivia game there are a lot of elements that the game takes from Trivial Pursuit. For the most part the trivia aspect of the game is basically the same. The categories are slightly different than Trivial Pursuit. Basically the teams take turns answering questions. Get a question right and you get to answer another one. This continues until you get a question wrong. The only major difference in the trivia aspect of Picture Pursuit is how categories are chosen.

One of the biggest problems that I have with Trivial Pursuit is the idea that you need to get a question correct in each category. Outside of the game forcing you to get questions right from categories that you have little knowledge of this adds a lot of luck and downtime to the game. Getting questions right is not the only thing needed in order to win the game. You also need to roll the right number on the dice to land on the spaces for the categories that you still need to get right. If you keep rolling the wrong numbers it doesn’t matter how good you are at trivia as you will have to keep answering questions that give you no real benefit in the game. This is all ditched in Picture Pursuit as you choose which category you would like to answer. This has two benefits. First you can focus on categories that you are better at instead of wasting time on categories that you know little about. Even better you don’t have to worry about rolling the right number to land on the space to get that last category that you need.

Other than taking way longer than it should, the other big problem that I have always had with Trivial Pursuit is that the questions can be kind of hard at times. This is especially true of categories that you don’t know that well. The problem with Trivial Pursuit is that it can ask you pretty specific questions about categories that you don’t know a lot about. While Picture Pursuit also relies on general trivia knowledge, the game seems quite a bit easier than Trivial Pursuit. I attribute this to two things. I think the biggest factor is the idea that you pick your categories so you can avoid categories that you don’t know much about. The other factor is that the questions just seem easier. They don’t seem to ask as specific of questions and they also give you more hints leading you in the right direction. I can see the trivia being easier as both a positive and negative for Picture Pursuit. On the positive side the questions aren’t as frustrating as you should be able to answer more of them correctly. On the negative side trivia buffs may find the questions to be too easy.

So enough about what Picture Pursuit shares with Trivial Pursuit. The one area where Picture Pursuit differs from Trivial Pursuit is the addition of the picture puzzles. While the trivia questions are the main mechanic in the game, solving these puzzles ultimately determines which team wins the game. Basically each time your team gets a question correct they have the opportunity to reveal one of the corresponding doors on the picture puzzle holder. This will reveal either part of a picture or some words that describe the puzzle word. As teams get more questions right they will receive more clues to the puzzle’s solution. The team that solves the puzzle will receive a chip. The first team to get six chips wins the game.

For the most part I thought this was a good addition to the typical trivia mechanics. This mechanic changes up the gameplay so you aren’t just answering trivia questions. It adds some visual and word puzzles to the game where the more you reveal the easier the puzzle becomes. Most of the puzzles’ difficulty comes from only being able to see part of the picture/some of the clues. There is some challenge to trying to figure out the solution with just a couple doors being opened. For the most part I liked this mechanic as it added something new and original to the game. This makes the game more interesting for people that generally aren’t huge fans of trivia games. Most of the puzzles aren’t particularly difficult, but I found them to be fun to solve as you get small pieces of information at a time.

I did have two small issues with the picture puzzles though. Replacing the gameboard with the picture puzzles reduces the luck from the roll of the die, but it also adds in its own luck. Luck in the game comes from a couple factors. First not all of the spaces on the puzzle cards are as valuable as others. Most cards have a couple spaces that really help with solving the puzzle. Then there are other spaces that are pretty worthless. In the word puzzles there are spaces that are totally blank. Thus to do well in the game you need to do a good job predicting where the most valuable spaces are. Choose wisely and you could solve the puzzle quickly. Choose poorly and you will have to correctly answer even more questions to solve the puzzle before the other team. This leads to the other problem which is that the best team is not always going to win. One team could do most of the work revealing most of the clues and then the other team could sweep in and steal the chip by getting that last piece of information needed to solve it. This can be pretty frustrating as one team could do most of the work for the benefit of the other team.

As for Picture Pursuit’s components I would say that they are basically what you would expect. The cards are basically your typical Trivial Pursuit cards. I found the picture holder to be pretty good though. It is easy to slip in the cards and opening the doors is really easy. As for the game itself I would say that it is a little outdated at this point. The game was made in 1994 and it must not have sold well as it was never reprinted like Trivial Pursuit. This means that the questions and picture puzzles are a little outdated and there are no expansion packs to add to the game. As it is basically Trivial Pursuit though this does open up some possibilities. Outside of some slight changes to the categories you could add cards from other Trivial Pursuit games to Picture Pursuit or vice versa pretty easily.

Should You Buy Picture Pursuit?

If I didn’t have the prior knowledge that Picture Pursuit was developed by the creators of Trivial Pursuit I would have picked up the idea shortly after playing the game. Picture Pursuit is not exactly the same game, but it does share a lot in common with Trivial Pursuit. The trivia mechanics are the same for the most part. The only real difference is how you choose question categories. Instead of relying on a die roll and the space your playing piece lands on, you instead just pick which category you want. I think this improves upon Trivial Pursuit as it speeds up the game and makes the game a little easier as you aren’t forced to answer questions from categories you know nothing about. The main difference between the two games is the addition of the picture puzzles. I liked this addition for the most part as it is a nice distraction from answering questions, and it is fun trying to solve puzzles only being able to see part of it. It does add some luck though as which windows you open can play a big role, and a team could solve a puzzle despite not answering any of the trivia questions that revealed parts of the puzzle. 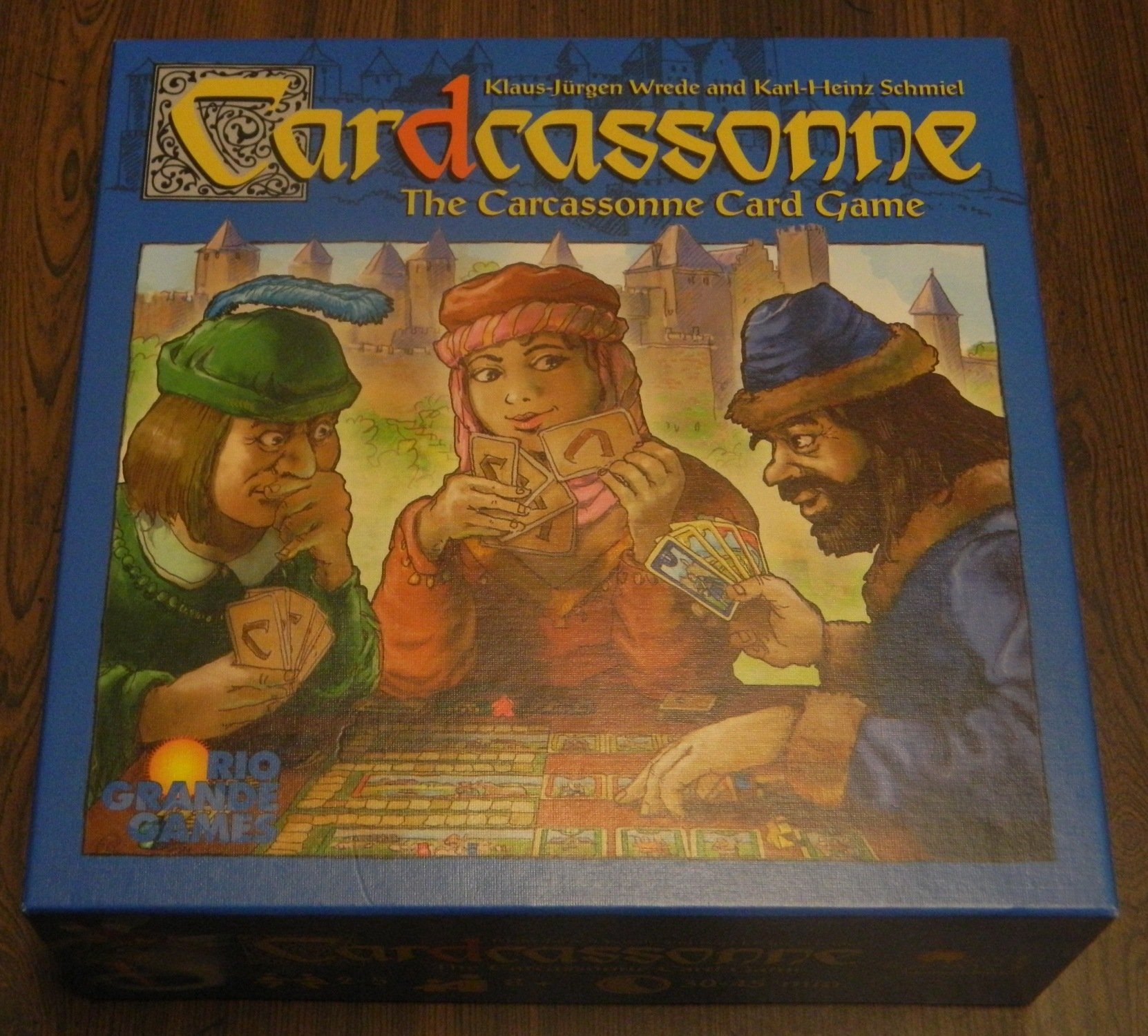 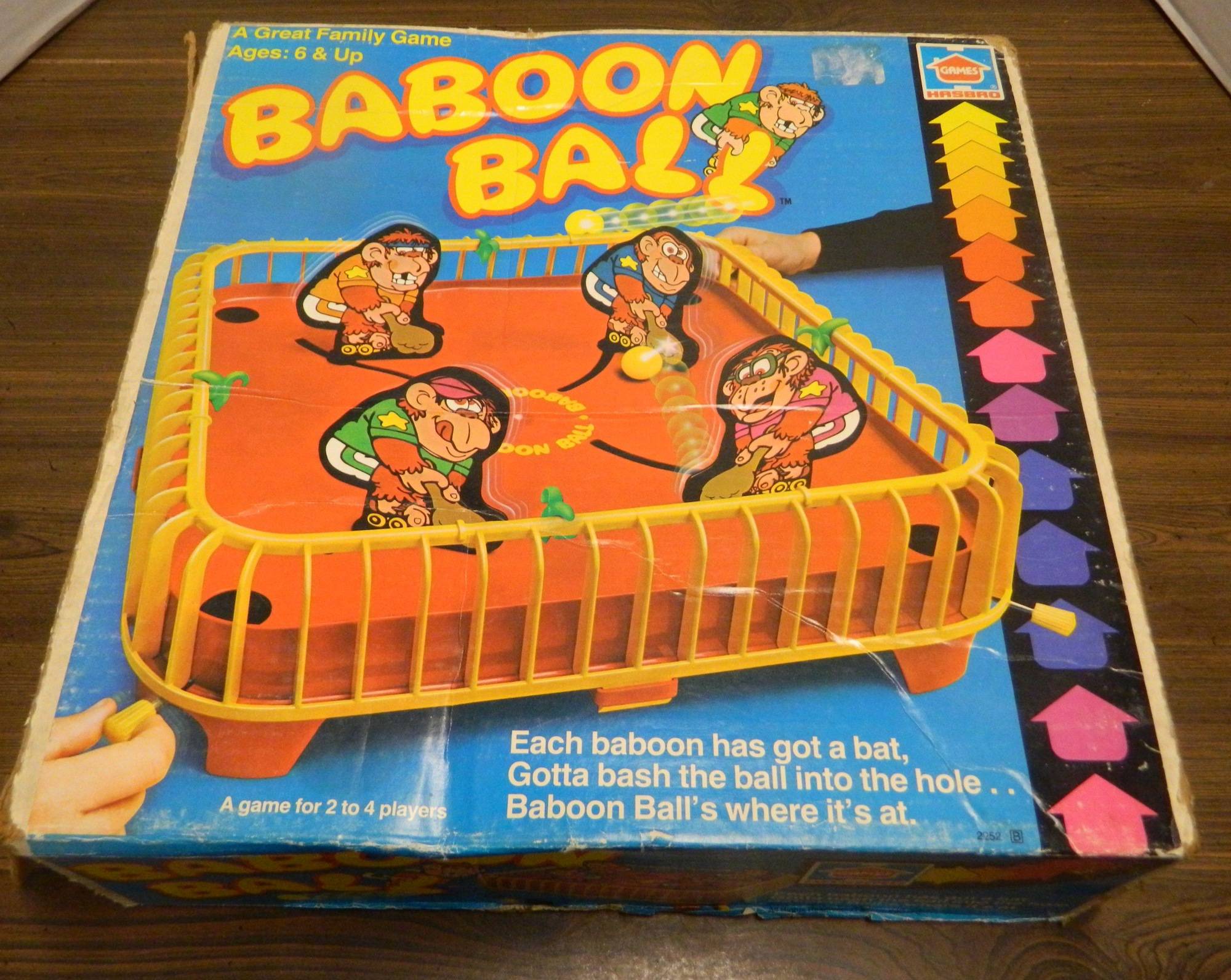