How to Play Pass the Trash

All of the players play the game at the same time. In front of each player there are two hand buttons.

The button on the left advances the trucks counterclockwise. When one of the trash trucks are not under a player’s trash chute they should keeping pressing their left button in order to advance the trucks towards their chute. 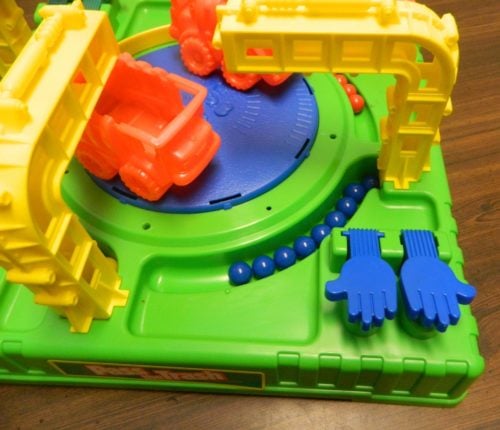 The blue player doesn’t have one of the trucks underneath their chute. They are going to want to keep pressing their left button until the truck is under their chute.

The button on the right launches marbles up your trash chute. When one of the trucks are under their chute they press their right button (pretty hard) in order to try to shoot their marbles into the truck. 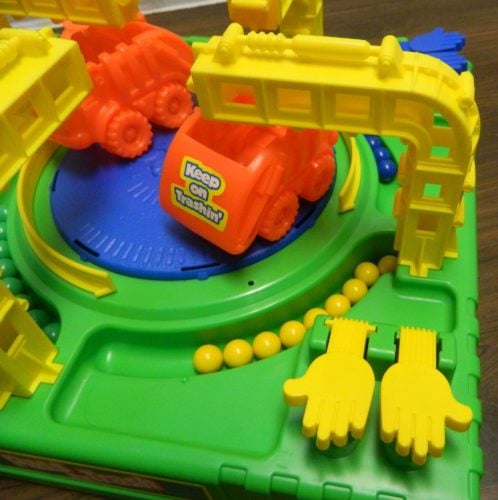 One of the garbage trucks are underneath this player’s chute. The yellow player is going to try to press the right button as often as possible.

There are two trucks in the game. One of the trucks has a hole in the bottom which should direct any trash shot into it towards the player on the right. The other truck will hold the marbles for the rest of the game. While you are generally going to get rid of your marbles through the trash trucks, any marble you shoot into another player’s bin stays in the bin that it is shot into. If any marbles bounce out of the gameboard, they are removed from the game.

When a player has no more marbles in their bin or chute, they shout out “I Win”. If no marbles enter their bin before this happens, they win the game. 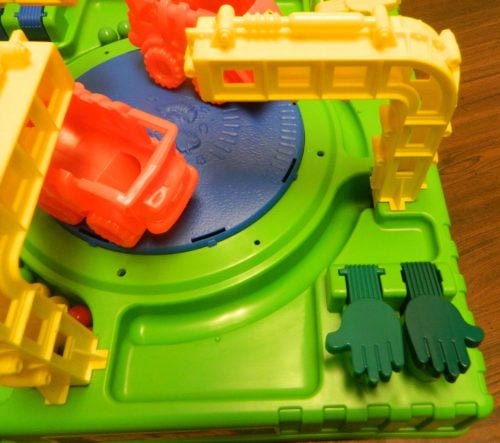 The green player has gotten rid of all of their marbles so they have won the game.

My Thoughts on Pass the Trash

While Hungry Hungry Hippos deserves credit for being released first, I actually think Pass the Trash is the better game. I say this because there is actually quite a bit more strategy/skill in Pass the Trash. Basically the only potential strategy in Hungry Hungry Hippos is trying to time when to hit your button in order to pick up a marble that is in the middle of the gameboard. In Pass the Trash there are actually a couple things that add some strategy and skill to the game.

Pass the Trash might have more skill/strategy that Hungry Hungry Hippos but it is never going to be confused for a deep game. You basically end up hitting the buttons as quickly as possible to try and get rid of your marbles. The game has an age recommendation of five and up for a reason. There is a little skill to the game but there is also a lot of luck. The launchers can be pretty inconsistent. Hitting the launcher with the same force each time won’t always launch the marbles the same. There are also times where you may miss the truck but get lucky and still have your marble roll into one of the other trays. With equally skilled players luck is likely going to be the determining factor. Like Hungry Hungry Hippos, Pass the Trash is a game meant to be mindless fun. Therefore the high reliance on luck is not as important as it would be for other games.

Like a lot of these type of children’s games, Pass the Trash is not going to be a game that you will play for long stretches of time. With most games taking five minutes or less, most people are probably going to want to play a couple games at a time. After a while though the game does get pretty repetitive as all you do in the game is press the two buttons to try and get rid of your marbles as quickly as possible. Likely within 20-30 minutes you are going to get sick of the game and are going to put the game away for another day.

For some people the biggest problem with Pass the Trash is going to be how loud it is. Pass the Trash has to be one of the loudest board games that I have ever played. If you think Hungry Hungry Hippos is loud, I think Pass the Trash might be even louder. The game is so loud that I wouldn’t be surprised if you could still hear it a couple rooms away with the door shut. If loud games annoy you I think Pass the Trash is going to drive you nuts. I would seriously consider wearing headphones/earplugs to block out some of the noise. If you would play the game for an extended period of time it would not surprise me if the game would end up giving you a headache from all of the noise.

As far as the components there are things to like and dislike. I actually give the game a lot of credit for being a lot more durable than you would expect. With players rapidly pressing the buttons and marbles flying everywhere the game stands up surprisingly well. As long as you don’t go overboard I would expect Pass the Trash to last. I do wish the game unit could have found a way to lower the noise a little though. I also worry that it wouldn’t be that difficult to lose the marbles. The marbles tend to fly all around the gameboard and they do occasionally fly out of the gameboard. If players don’t look for these marbles right away I could see them getting lost pretty easily. Finally while there is no way the game could have come in a smaller box, Pass the Trash has one of the largest boxes that I have ever seen for a board game. If you are a space conscious person it may not be the game for you.

Should You Buy Pass the Trash?

Before playing Pass the Trash I have to say that it reminded me a lot of Hungry Hungry Hippos. The two games have totally different themes and one has you gathering marbles while the other has you getting rid of them. The games do actually share quite a bit in common though. Both are pretty mindless children’s games that are more fun than you would expect. In a lot of ways I would actually say that Pass the Trash is better than Hungry Hungry Hippos since it has more skill/strategy involved. It actually takes some skill to time your shots properly and apply enough pressure to the button to get the marbles out of your trash chute. The game still relies heavily on luck but it actually feels like you can get better at Pass the Trash. Pass the Trash is pretty simplistic which means it is a game that you are only going to want to play for a short time before you put it away for another day. Pass the Trash might also be one of the loudest board games that I have ever played.

If you would like to purchase Pass the Trash you can find it online: Amazon