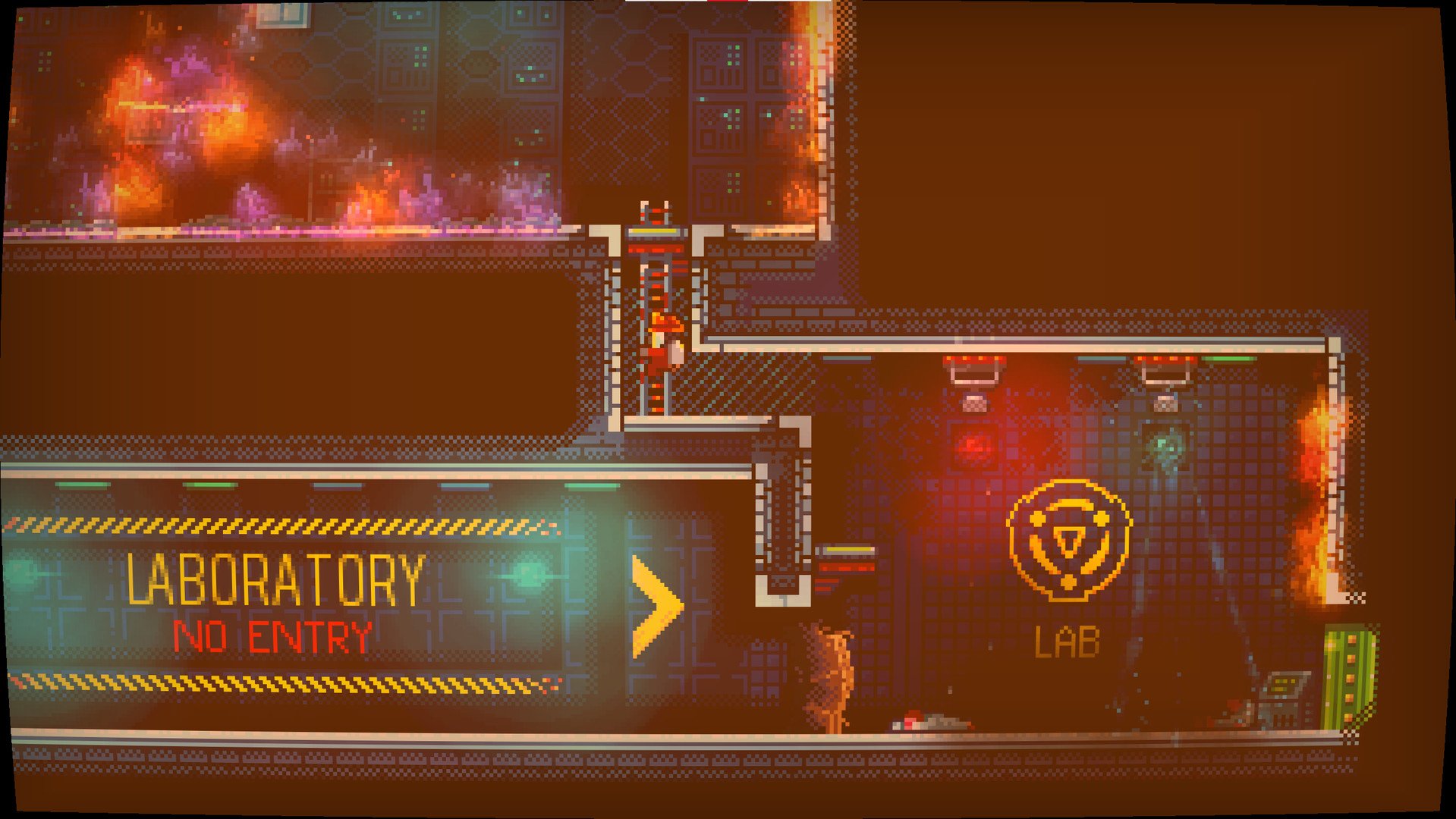 While there have been quite a few firefighting video games, it is not something that ever really interested me. Maybe it is just a coincidence, but it seems like the firefighting theme is starting to gain popularity in the indie video game scene. Recently I took a look at Embr, and today I am looking at Nuclear Blaze. While I never played Dead Cells, which was the previous game created by the developer of Nuclear Blaze, I was intrigued by the game as a 2D firefighting game sounded fun. Nuclear Blaze is a fun blend of a typical action game with a firefighting theme which is a blast to play even if the experience is over too quickly.

If I were to describe the gameplay of Nuclear Blaze I would consider it to be what you would get if you took an action game and applied a firefighting theme. The facility you explore is divided up into a number of rooms/sections. In each section you have to put out all of the fires in order to open up the path to the next level. You have access to a tank of water which you can shoot in a number of directions with the press of a button. If your water hits a spot of the facility that is on fire, it will put out the fire on that space. Your supply of water is limited though (unless you change one of the difficulty settings), so you will have to refill at water stations throughout each section. If you don’t put out the fires quick enough they will spread to nearby areas. Should you step into a fire you will lose health. Depending on your difficulty setting, you may “die” and have to restart the current section of the facility.

In addition to the action elements, the game has a sort of puzzle element to it. Each section of the game is pretty big with a lot of fires to put out. If you want to complete the section you can’t just run in and start shooting water everyone. You need to take a more methodical approach as you clear out one area which gives you access to another and so on. In a way this kind of feels like a puzzle as you need to figure out the best way of moving around the area to put out all of the fires without getting surrounded by flames.

If I were to try and classify Nuclear Blaze on the spectrum between a highly realistic firefighting game and your typical action arcade game, I would say that it has elements of both. The game actually does a good job making you feel like a firefighter. Basically your only tool in the game is a water hose (with a portable water tank) that shoots water at the fire to put it out. The fire seems to spread realistically as if you don’t put out a fire it will continue to spread to areas that aren’t currently on fire. You need to take a methodical approach to putting out the fires as you otherwise can get surrounded by fire and have to restart your current level.

At the same time though the game doesn’t get bogged down in the minutia of having to be 100% accurate. The game has a strong action arcade-y feel to it. You need to move around each section quickly in order to put out the fires.  The game even has some elements of a 2D platformer. The game’s controls are quite straightforward as you use an analog to aim the water and another to shoot. Otherwise you have a jump and other movement options. The gameplay works because it maintains a fast pace as you have to keep working putting out fires. There is skill to the game as well though since you need to aim properly and avoid wasting water as you usually don’t have unlimited access to it. I never really had much interest in firefighting video games, but the gameplay in Nuclear Blaze is really satisfying and makes me rethink my feelings towards video games utilizing the theme.

The gameplay is quite satisfying and the controls are a big reason for that. The controls are usually quite good. I had a couple occasional issues where my character didn’t go quite where I wanted them to which lead to a couple deaths. The jumping mechanics take a little time to get used to as well since it utilizes a system where you pull yourself up automatically. Otherwise there was nothing to complain about regarding the controls. When you die it can almost always be attributed to a mistake you made.

As for Nuclear Blaze’s difficulty I would say that it is quite flexible. The game doesn’t really have standard difficulty settings. Instead you can adjust a number of sliders and options which ultimately determines the game’s difficulty. I ended up playing the game on the default difficulty, and I would say that I found it to be on the easy to moderately difficult side. On the difficulty scale the default difficulty is already pretty close to the highest difficulty setting so I am not sure how much harder the game could get. On the default difficulty if you take any hits you will have to restart the section from the beginning unless you pick up a shield which protects you against one hit. This isn’t a huge punishment for dying as each section only takes a couple of minutes at max to complete. If you take your time and are mindful of your surroundings, you don’t have too much to worry about with the game as you should be able to beat all of the sections within just a couple of attempts.

While I think the game could have been a little more difficult (maybe switching all of the settings to their highest difficulty would help), this is not necessarily a bad thing for the game. If you want a real challenge you may be a little disappointed. With an easier difficulty though the game avoids becoming frustrating. You can just enjoy the game without having to regularly worry about having to restart a section from the beginning. The ability to tweak individual settings instead of just picking a setting such as easy, hard, etc is also a good idea as it lets you tweak the experience to fit your playstyle and skill level. The game even includes a dedicated kid mode which allows young children to play a modified version of the game where they can play as a firefighter without having to worry about dying and having to restart a level.

As for the game’s atmosphere, theme and story; I generally enjoyed them. The game utilizes a pixel style for the graphics which looks quite nice. The game does a good job making you feel like a firefighter that is trying to put out the fires that are spreading throughout the facility. As for the story I am not going to go into details outside of saying that the facility is not exactly what you probably expect it to be. The story isn’t a big part of the game, but I was genuinely surprised by it as it goes in directions that I wasn’t expecting. It probably won’t be for everyone, but it is interesting enough to hold most players’ attention.

I really enjoyed playing Nuclear Blaze. Unfortunately the game is on the shorter side. The amount of time that you will get out of the game somewhat depends on how you approach it. Those who just do what is necessary to advance in the game will obviously take less time than those who try to find each hidden element. Mostly for the hidden elements you are looking for secret areas which will allow you to save a cat as well as get another letter detailing what happened at the facility. While playing the game I tried to find all of the secret areas and was able to find most of them. This only took me around 2.5 hours. If I would have found all of the secrets I think this would have added around a half hour to an hour at max to the game. If you do the bare minimum though, I could see you beating the game in less than two hours. While Nuclear Blaze was a blast while it lasted, it is a shorter experience than I was hoping. The game does have the kid mode which seems to have different levels, but it also is so easy that I don’t know how much time it would add to the game. The biggest shame about the length is that the gameplay was still fresh and exciting when the game ended, where I think more content would have just made the game even better.

In the past I never really had any interest in a firefighting video game. This mostly had to deal with the fact that there are few actually good firefighting games out there. Nuclear Blaze bucks that trend as it is a really fun video game. It is basically what you would expect if you took an action game and combined it with the firefighting theme. The game does a really good job finding the right balance between being realistic and keeping up the action. The game does a good job making you feel like a firefighter leading to a game that is really satisfying. The game is moderately difficult and gives players a lot of options to adjust the difficulty to a level that you are comfortable with. The game’s atmosphere is quite good as well even if the story goes in some unexpected directions. Honestly the main issue I had with the game is just that it is pretty short at only 2-3 hours long. I was really enjoying the game where it was kind of disappointing that it ended so quickly.

If you don’t really have much interest in a 2D firefighting action game, it may not be the game for you. If the premise interests you at all though, I think you will really enjoy Nuclear Blaze. Whether you pick it up right away or wait for a sale depends on how much length matters to you. I would highly recommend picking up the game at some point though as I really enjoyed playing it.