Today I am looking at the game Get A Grip: The No Thumbs Challenge. Heading into the game I didn’t know exactly what to think. I generally like a silly party/dexterity game, and the premise of playing one of these games while only having access to just a couple of fingers sounded kind of interesting. The problem was that the game seemed kind of cheaply made and was mostly made in order to make a quick buck. Because of this I thought there was a good chance that the game could be pretty bad. Due to finding the game for really cheap though, I still decided to check it out. Get A Grip: The No Thumbs Challenge can be kind of fun when it embraces the silliness of its premise, but far too often it reverts back to becoming another very generic silly dexterity game.

How to Play Get A Grip: The No Thumbs Challenge

On each turn the current player will draw the top card from the challenge deck. They will read the card out loud and will choose their opponent for the challenge. Players will wrap up their hands with the bands. The players will then follow the challenge outlined on the card. The cards are divided into three main categories which are detailed below.

The player who wins the challenge will get to keep the card to indicate that they won the round. They will then draw another card and choose a different player to compete against.

The challenge card will show an object that you must sculpt with the included clay along with a time limit to work on your sculpture. 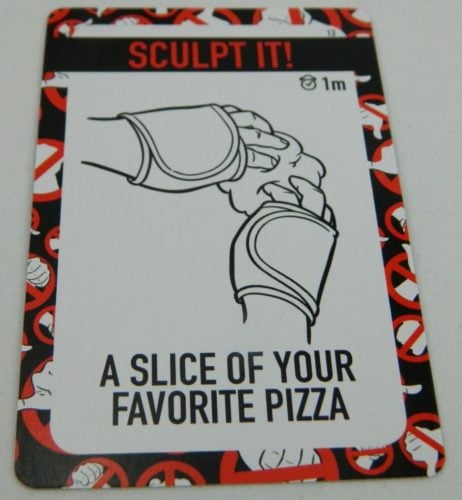 In this round both players will make a piece of their favorite pizza with the included dough. The player who makes the best pizza as judged by the other players will win the round.

The challenge card will show an object that you must draw and how much time you have to do it.

When the timer runs out the non-competing players will vote for which of the two drawings they think best matches the image on the card. If there is a tie, the tied players will compete in a different challenge, and the winner of that challenge will receive both cards. 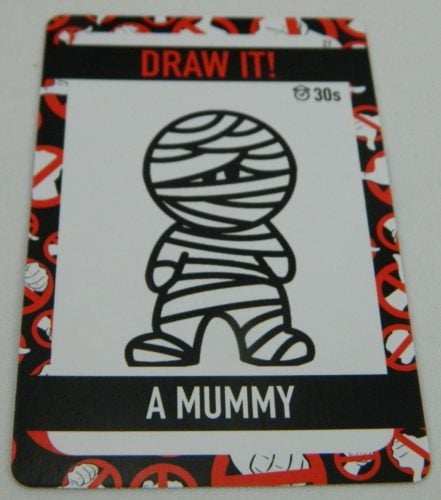 For this challenge the two players will draw a mummy. The drawing that the other players like the most will win the round.

These challenge cards will outline a challenge that the two players will compete in. If the challenge requires objects that you don’t have access to, you will draw a different challenge card.

The first player to complete the challenge will win the card. 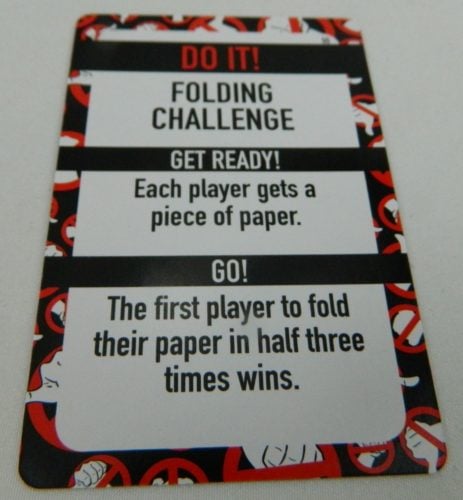 For this challenge the two players will compete to see who is the first to fold a piece of paper in half three times.

The first player to collect three cards wins the game.

My Thoughts on Get A Grip: The No Thumbs Challenge

I got to say that Get A Grip: The No Thumbs Challenge is a good example of you get what you see. In many ways the game is similar to your typical party game. The one main difference is that the game limits how many fingers you can use to try and complete the challenges. Theoretically having access to less fingers should make the challenges more difficult and also sillier. That is the idea that the whole game is built around. It works at times, but it also has a lot of issues.

The problem with the Do It challenges comes from the fact that the game basically puts you on a little scavenger hunt before the game even begins. Outside of the dough, cards, pads of paper, and hand bands; the game requires you to supply the rest of the components. While the game couldn’t have included most of the items required for the challenges, the game should have included more challenges using items that it actually could have included. It just feels kind of cheap that you have to supply most of the required objects yourself. On top of this the game only includes 60 cards meaning you will have to repeat cards rather quickly. Otherwise the components are not bad, but I think the game could have done a better job with them.

Lets move onto the Draw It and Sculpt It challenges. I enjoyed these two types of challenges considerably less than I did the Do It challenges. I think a lot of this had to do with the fact that these challenges felt like way too many other party games. Really the only difference is that the game limits the number of fingers that you can use. Otherwise these play like every other drawing/sculpting game and there are a lot of them out there. Having a limited number of fingers to use does have an impact on how well you will do in these challenges, but it otherwise does nothing to really change the experience. If you like drawing/sculpting games, you likely will have fun with these challenges in Get A Grip: The No Thumbs Challenge. If you don’t, I don’t see how having less fingers available to you will make any noticeable difference.

As for the whole gimmick of not being able to use your thumb and other fingers, I think it can be hit and miss. For some of the challenges it can actually make a pretty big difference especially if you only use two fingers on both hands. Other challenges are barely impacted by having less fingers available. This is where the game might be the most disappointing. I was intrigued by the game’s premise as it could have made for a silly party/dexterity game. It is sometimes. More often though it just feels like another generic party game. If you were intrigued by the game’s premise you likely will get some enjoyment from the game, but those not all that interested are unlikely to find anything in the game to change their mind.

As for the overall game itself, it has some issues when it comes down to scoring. Basically players compete in 1 vs 1 challenges with the winner receiving a point and getting to pick another player to compete against. To win the game you only need to win three challenges. Outside of really large groups this seems like way too few. The starting player could end up stringing together a three win streak and immediately win the game. There also are ways to cheat the spirit of the game in order to improve your chances of winning. While you have to pick different competitors each round, the players could choose not to select a player that is in the lead giving them no chance to win the game. While the Do It challenges have an obvious winner, the Draw It and Sculpt It challenges are subjective where players could choose not to vote for the player in the lead preventing them from winning the game. I don’t know how else that game could have done things, but if you have ultra competitive players there will likely be some problems with the scoring.

I have been pretty hard on Get A Grip: The No Thumbs Challenge in this review. I think a lot of it is warranted since I don’t think it is a particularly good game. That doesn’t mean it is a terrible game that no one will like. I could definitely see some groups really enjoying the game. The game is quite easy to play as it can be taught in just a couple minutes. Thus the game is quite accessible where younger children or those who rarely play board game can enjoy it. It can also be quite silly where I think it will work well in family or party situations. If the game’s premise sounds interesting to you, I think you could get at least a little enjoyment out of it even if a lot of people are unlikely to enjoy playing it.

Should You Buy Get A Grip: The No Thumbs Challenge?

I wouldn’t say that it is that common, but Get A Grip: The No Thumbs Challenge is pretty much exactly what I expected it to be. The game is very similar to your typical silly party/dexterity game with the twist that you are limited on what fingers you can use to complete challenges. This premise sounded somewhat interesting and works at times. I thought the Do It challenges could be kind of fun. The problem is that the game has far too great of an emphasis on drawing and sculpting challenges. While having less fingers does impact your ability to do both, these challenges still didn’t differ much from most of the other games from the genre. The overall structure of the game is not great either as it is not that hard to win three challenges and players can manipulate the outcome of too many challenges to improve their own chance of winning the game. While I don’t see the game being for everyone, there will be some groups that will enjoy it. The game is easy to play and is silly enough that it will work in some party and family settings.

My recommendation really comes down to your thoughts on the premise. If you aren’t really interested in the limited fingers premise behind the game, I would probably say to avoid the game as it likely won’t be for you. If you like a silly party/dexterity game and think the premise sounds really interesting though, there may be enough to Get A Grip: The No Thumbs Challenge that it might be worth picking up for a good price.

Buy Get A Grip: The No Thumbs Challenge online: Amazon