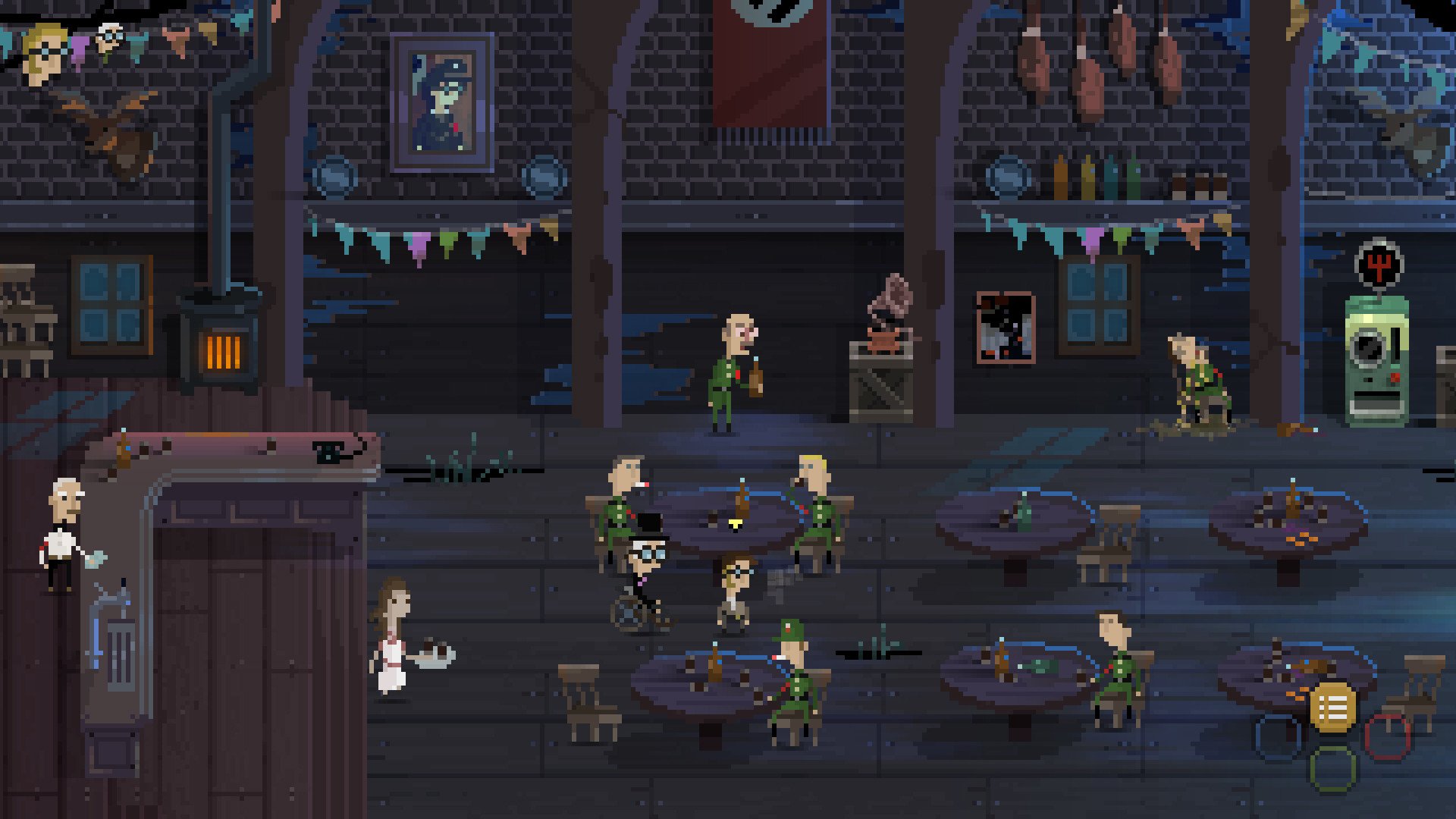 When I was a kid I can’t say that I was a big fan of the point and click adventure video game genre. Despite growing up during the classic era of the genre, I just could never get into it. In recent years though I have really started to appreciate the genre especially since puzzle games are arguably my favorite genre of video games. With that in mind, today I am looking at a new entrant in the genre Nine Witches: Family Disruption which releases today for Nintendo Switch, PC, PlayStation 4, and Xbox One. What initially intrigued me about the game was that it was set during World War II as you are tasked with stopping the Nazis from utilizing a supernatural entity to turn the tide of the war. Nine Witches: Family Disruption might not drastically differ from other point and click adventure games, but it creates a satisfying game that fans of the genre should enjoy quite a bit.

Nine Witches: Family Disruption takes place in the middle of World War II. The Okkulte-55, a secret division of the Third Reich, has traveled to the Norwegian town of Sundäe. The town is known for a ancient curse that the Nazis decide to release in order to try and help them in the war effort. You play as Alexei Krakovitz, a professor of occult science, and his assistant Akiro Kagasawa. They have been recruited by the Allies in order to investigate what happened and stop it before it threatens the world.

In many ways Nine Witches: Family Disruption shares a lot in common with your typical adventure point and click game. The main objective of the game is to solve puzzles in order to progress the story and save the day. The game world is broken up into a number of different locations that you can explore. While exploring the environment you can talk with people as well as pick up various objects. You need to use the information you learn along with the items you pick up in order to solve the puzzles you encounter along the way.

One somewhat unique twist in Nine Witches: Family Disruption is the fact that you will be playing as two different characters at the same time. Akiro is for the most part your typical character from this genre. He can talk with characters, interact with objects, and utilize the objects he picks up throughout the journey. Meanwhile Alexei has one special ability which allows him to project his consciousness into the spectral realm. This allows him to enter locked buildings and talk with characters that have died. You need to use the abilities of both of these characters in order to make progress in the game.

I would say that anyone familiar with the point and click adventure genre should already have a pretty good idea of what to expect from Nine Witches: Family Disruption’s gameplay. The gameplay is mostly built around puzzle solving and exploration. You basically move from location to location finding objects and information that you then use at another location to advance the story. Even having two different characters doesn’t change much in the game as the only somewhat unique mechanic is being able to visit the spirit realm. This aspect of the game may not be highly original, but it is still enjoyable. The puzzle design is good as it is fun solving the game’s various puzzles.

One mechanic that I haven’t talked about yet is the shooting mechanic which comes up periodically from time to time. When you reach certain parts of the story you will encounter enemies. You will be given a pistol with unlimited ammo (minus a reloading period) and there are other more powerful weapons scattered around the location. In order to advance in the game you will have to defeat all of the enemies in the current location. The shooting is quite basic as you move around the 2D environments trying to shoot the enemies while avoiding their attacks. If you kill them all before you run out of health you will continue with your journey. If you die you will have to restart the fight from the beginning.

I can’t say that I was a big fan of this element of Nine Witches: Family Disruption. There is nothing particular wrong with the mechanic as it controls fine. It actually adds most of the challenge to the game as it is pretty much the only time you can die/fail. My problem with the mechanic is that I didn’t find it to be all that interesting. Basically your best option is just to run around taking shots at enemies before they have the chance to shoot. Some of these fights can be quite easy while others will lead to a few deaths as you have to get used to where the enemies come from. This mechanic doesn’t ruin the game, but it doesn’t really add all that much either.

On the topic of difficulty most people are probably wondering how difficult Nine Witches: Family Disruption is? I honestly wouldn’t say that the game is all that difficult. The shooting parts of the game are easily the most difficult as you will die a few times in some of them. There were a couple times where it took a little time to figure out what I had to do next. Otherwise it was usually pretty obvious what I needed to do next. There were plenty of times in the game where I knew that I was looking for a specific type of item, or I knew immediately what to do with an item I just acquired.

I wouldn’t necessarily say that this is a good or bad thing. If you are looking for really challenging puzzles that will force you to think outside of the box, you may be a little disappointed. Most of the puzzles are quite straightforward where most of the challenge comes from just finding the objects that you need to use. This itself is not usually that difficult because of the Professor’s spirit power. When in this phase you can press a button which shows you all of the different objects that you can interact with on the screen. This makes it easy to find any objects that you didn’t notice at first. While I thought it could be a little more challenging, at least the game doesn’t rely on obtuse puzzles that don’t make a whole lot of logical sense.

Next I wanted to quickly talk about Nine Witches: Family Disruption’s controls. The adventure point and click genre is mostly known for the PC because the use of a mouse is key to the control scheme. This game is being released for consoles along with PCs though so it was designed to work with a controller. I honestly can’t think of any way that the game could have done a better job adapting the gameplay to consoles. I played the game on PlayStation 4 and I had no issues. The designers were smart to assign each action to a different button so you don’t have to waste a bunch of time accessing different menus.

As for the game’s overall story I have some mixed feelings as there are things I liked and other things that could have been better. In many ways the story is your typical mixture of different sci-fi elements. Basically the Nazis unleash a dangerous force that slowly starts to take over the surrounding area. You mostly just figure out what is causing the trouble and try to put a stop to it before it spreads too far. The story is interesting enough that I wanted to see how it would end, but it isn’t particularly original as I have played other games with a similar premise.

Now lets move onto the game’s humor. I am even more conflicted about this. On one hand the game does have some moments that are genuinely funny. The game isn’t afraid to break the fourth wall which can be pretty funny at times. The downright silliness of the story can also be pretty funny. At the same time though the game is filled with a lot of jokes that failed completely for me. These jokes are so bad at times that they were more groan-worthy than actually funny.

On the topic of the game’s overall theme I wanted to quickly talk about the game’s art style. I am guessing players are going to have mixed feelings about it. The game relies pretty heavily on the pixelated style replicating older games from the genre. If you have never cared for this style, I don’t think you will like the game’s art style. Those that like the style will probably appreciate the game’s visuals though.

Finally before wrapping up I wanted to quickly talk about Nine Witches: Family Disruption’s length. As the game is a point and click adventure game, there isn’t a whole lot of replay value. The story is completely linear, and outside of a few areas you have to do things in a particular order. Therefore each playthrough will basically be the same. Just beating the game will give you all of the achievements as well. As for the actual length I would say that it will take most players between four to six hours. I would say that it would be a little shorter except that there is quite a bit of backtracking in the game as you have to move back and forth between locations as you acquire new items.

Ultimately Nine Witches: Family Disruption is a pretty typical point and click adventure game. You basically move around the world gathering information and picking up objects in order to solve puzzles. The game introduces a spectral mechanic allowing one of the characters to walk through locked doors and talk with dead characters. Otherwise the game doesn’t really differ from the rest of the genre. This shouldn’t be taken as much of a complaint as the game is still enjoyable for fans of this genre. The game is on the easier side, but it is still pretty fun solving the puzzles. There isn’t a whole lot of replay value to the game as most people can probably finish it within four to six hours. The story is solid even if it is not highly original. The humor is hit or miss as it can be pretty funny at times, but really falls flat other times.