Yesterday I looked at probably Brian Hersch’s most popular game, Outburst. Despite not being a perfect game I enjoyed Outburst quite a bit. Being surprised by Outburst I decided to give another of Brian Hersch’s games a chance. This time I am looking at his 1992 board game Name Burst. Basically Name Burst is a trivia/party game where you give clues to help your partner guess various celebrity names. While Name Burst had the potential to be a solid party game, time has not been kind to it.

How to Play Name Burst

Each player chooses which player number they will use for the game. Insert the assignment card into the score pad holder that corresponds to the number of players playing the game. If the card viewer is not set for a new game, press the small button on the front and push down on the sleeve that holds the card until only the first name on a card will show in the window. 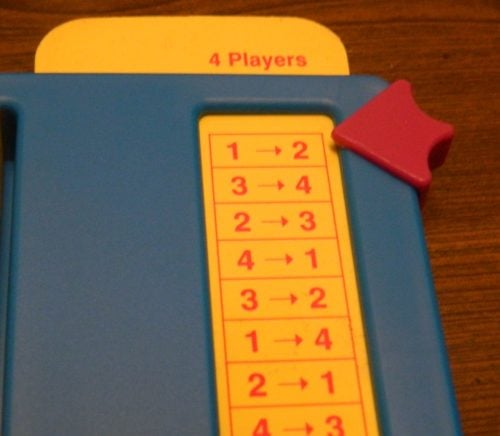 For the first round the first player will give clues to the second player. 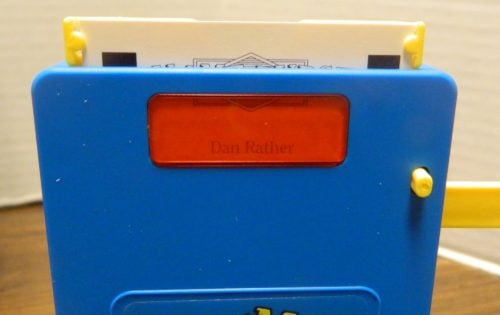 The first name for this round is Dan Rather. The clue giver will have to give clues to their teammate to get them to guess Dan Rather.

When a player correctly guesses the name, the player pulls the lever on the side of the card holder and moves onto the next name. For each name that is guessed both players will receive one point. The players are able to pass on one name and receive no penalty. Any additional names that are skipped lose both players one point.

The game ends when all of the rounds on the assignment card have been played. All of the players tally the points they earned. Whichever players scores the most points wins the game.

My Thoughts on Name Burst

So the basic gameplay of Name Burst is very similar to the public domain game of Celebrity. Instead of coming up with your own celebrities to play with, you draw cards that have a list of celebrities on them. Each round one player is responsible for giving clues while another player tries to guess the celebrities that the other player is describing. For each correct answer both players receive one point. Whichever player has the most points at the end of the game wins.

While I wouldn’t consider Name Burst to be a highly original game, I think it had the potential to be a solid party game. There are quite a few other games which involve one player giving clues and another trying to guess the word/object/person being described by the other player. Nonetheless Name Burst can be a fun game. It is fast and easy to play. It is satisfying guessing answers based on clues given by another player. If you don’t really care for these type of games Name Burst won’t be for you. If you do like these type of game though you can have some fun with Name Burst.

Name Burst has the makings of a very solid party game and yet fails due to one simple but huge problem. I have complained about games being outdated in the past and yet I don’t know if I have encountered many games that are as outdated as Name Burst. The game was released in 1992 (I was a couple years old at the time). Despite not being that old, it is terribly outdated. If you are younger than 40-50 you will have a pretty hard time with a lot of the names unless you know a lot of pop culture from when you were really young or even from before your time. I was young when the game was released and I honestly didn’t know who 60-75% of the people were on the cards we ended up using.

It is pretty sad that the easiest names in the game were probably the fictional characters since most of them are still relevant today. Next to the fictional characters are the major historical figures that everyone knows followed by celebrities that are/were so famous that they are still well known today. Unfortunately at least half of the celebrities in the game don’t fit any of these criteria. This means that if you weren’t alive or old enough when they were famous you probably have no idea who they are. This gives a pretty big advantage to the older players while also making the game pretty dull for the younger players who don’t know who most of the people are.

One mechanic that slightly masks the fact that the names are pretty outdated is the fact that there are ways to get around guessing names of people you don’t know. If you are clever you can break down the person’s name and give clues for the other player to figure out each section of the person’s name. With some of the names this is actually a valid strategy. Using this strategy I was actually able to get some names of people that I knew nothing about. The problem with relying on this though is that it takes considerably longer than just giving clues about the specific person. There is also the fact that some names are much easier to break down than other names.

Name Burst could have also fixed being outdated by allowing players to skip as many names as they want without losing points. While the game lets you skip one name without a penalty, every other name you skip loses you one point. With such a high penalty it is barely worth skipping names at all. After your first skip you need to get at least two names correct to make it even worth skipping a name in the first place. Instead of losing points I think the game should just let players skip as many names as they want but prevent them from returning to names they already skipped. This just feels a lot more fair for players.

The outdated names issue culminates in players relying more on getting lucky rather than being good at guessing names and giving clues. Unless you are old enough to know a large majority of the people included in the game, you basically have to hope that when it is your time to play you get names that you and your partner are aware of. The cards don’t seem to be particularly fair in this regard as some cards have easier names than others. It is a shame that instead of relying on your skill in the game, you have to rely on luck in order to win the game.

While Name Burst’s components aren’t much to look at, they are still pretty good for an early 1990s party game. While the cards are quite outdated I have to give the game credit for including quite a few of them. The game has 200 cards and since every card is double sided it means that you can play 400 rounds of the game without having to repeat any cards. If you were ever going to play the game that much it also wouldn’t be that big of problem anyway since I don’t think you will remember many of the cards. Other than the quantity of cards included with the game, I really liked the card holder. While it is really simple, I think it is pretty clever including a lever that automatically advances the card to the next name.

Possibly the best component in the game though are the assignment cards. Basically the role of the assignment cards are to setup every possible combination while spreading out every players’ turns so they don’t have to sit around too long between rounds that they get to play in. It honestly wouldn’t be that hard to have every player play one round with every other player but I think it would be pretty hard to make it so no player would have to wait too long between turns.

When it comes down to it I have to say that it was kind of hard to give a final rating to Name Burst. The game actually has the mechanics to be a pretty solid party game. The outdated cards let the whole game down though. I ended up giving the game a two out of five because I was unable to look past the outdated cards. The thing is if there was an updated version Name Burst I could see the game getting at least a three out of five. This is an instance of the age of a game actually having a negative effect on my final rating.

Should You Buy Name Burst?

Name Burst has everything you would expect out of a solid party trivia game. The game is quick and easy to play. The premise while not highly original is still pretty fun. The problem is that the game has become so outdated. If you were young or not even born when the game was first released you are going to have a hard time knowing over half of the names included in the game. This makes the game kind of dull for younger players as well as making the game rely way too much on luck. While you can overcome some names you don’t know with clever clue giving, it still presents a serious problem for the game. If only the game was a little more updated it could have been a considerably better game.

If you don’t really care for Name Burst’s premise it isn’t going to be for you. If you are under 40-50 you probably won’t recognize at least half of the names included in the game. This is the main reason I can only recommend the game if you really like the game’s premise and can find the game for a couple dollars.

If you would like to purchase Name Burst you can find it online: Amazon