While not as prevalent today, movie tie-in board games were quite popular in the pre-2000’s. In order to cash in on popular movies, board game publishers usually slapped together a board game that utilized thematic elements from the movie but little in the way of gameplay mechanics. This lead to most of these games being dull roll/spin and move games. While the Batman Returns movie is a solid movie, I wasn’t expecting much from the board game due to my experience with movie tie-in board games. After playing the Batman Returns 3-D Board Game, it ended up being exactly what I expected.

How to Play Batman Returns 3-D Board Game 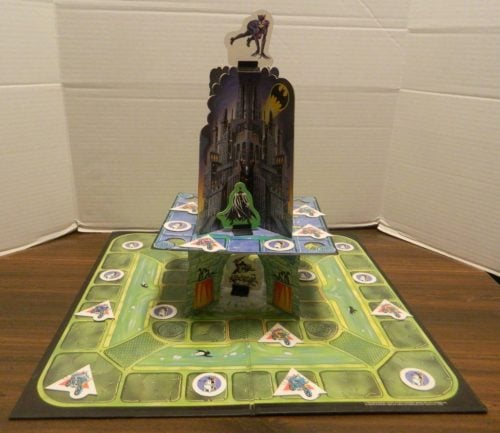 A player starts their turn by rolling the number die. The player will then move their Batman figure up to the corresponding number of spaces on the gameboard. While moving if a player lands on or moves through a space occupied by another player, they skip over that space without counting it as a space. If a player moves to one of the manhole covers they can use one movement point to either move down or up through the sewer.

If a player lands on a tile they will battle the henchman pictured on the tile. 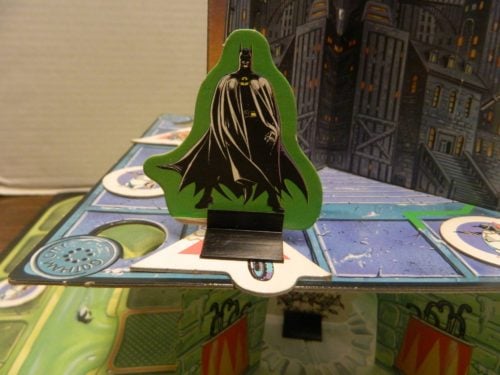 The green player has landed on a henchman tile so they will fight the henchman.

When a player captures a henchman tile they can look at the back of it but they shouldn’t show it to the other players.

After a player has moved their playing piece and possibly battled a henchman, play passes to the next player clockwise.

The game can end in two ways. If all six explosion tiles are added to the city, all of the players lose the game.

Otherwise the game ends when someone captures Penguin. After someone has three bat signal tiles (5 in a two player game) they can show the tiles to the other players and they can then go after Penguin.

This player has acquired three bat signals so they can fight Penguin.

To battle Penguin a player has to make it to one of the red outlined spaces in the sewer. The player then rolls the battle die like a normal battle. If they roll the bat signal they defeat Penguin and the game ends. If they fail to defeat Penguin any other player can now attack Penguin even if they don’t have three or more bat signals. 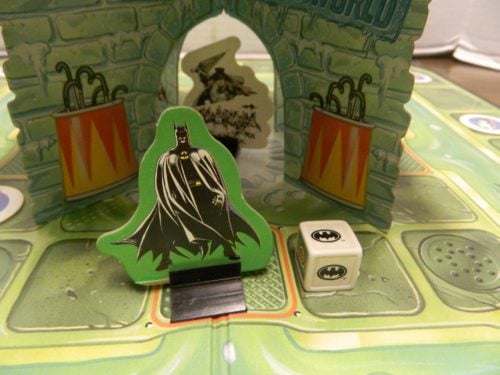 The green player has beaten Penguin so the game has ended.

Players will then count up how many points they received during the game: 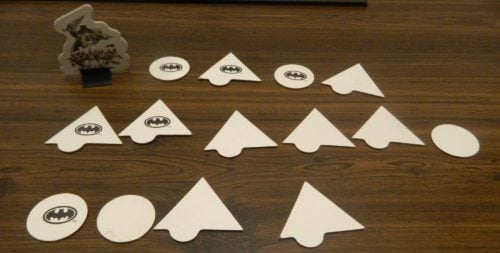 My Thoughts on Batman Returns 3-D Board Game

I am going to get right to the point. Batman Returns 3-D Board Game is not a good board game. Think of the most generic licensed roll and move board game you can think of and you should have a pretty good idea what it is like playing this game.

Basically all you do is roll the die and move around the board trying to land on one of the henchman tiles in order to battle it. To battle a henchman you basically just roll another die and hope to get a bat signal (4/6 of the sides feature a bat signal). This continues as players take turns fighting henchmen until someone controls at least three tiles with a bat signal on them. This player can then fight Penguin which basically involves moving to him and then rolling the combat die again. Once someone has beaten Penguin the game ends. That is basically all there is to the entire game.

If reading that description was boring, the game itself isn’t much better. The biggest problem with the Batman Returns 3-D Board Game is that it is just so boring. It just isn’t that interesting rolling dice and moving around the board. While players can make decisions about where to move on the board, each decision is either really obvious or just a random guess so player input doesn’t really have any impact on the game. Basically just move to whichever tile you think has a bat signal on it and battle that henchmen. As you have no idea what tiles have a bat signal all you can do is guess with no real information to help you out.

As two thirds of the symbols on the battle die win a fight, the fights aren’t particularly exciting either. If the game would have included several battle dice and you had to roll a certain number of bat signals the fighting still wouldn’t be exciting but it would be better than just rolling one die. I really don’t know if the battles in Batman Returns 3-D Board Game could have been any less anti-climatic.

So a player has gotten enough bat signals to fight Penguin. You would think that this fight would be interesting since it is the final battle of the game after all. Once again the final battle is another opportunity to let you down. Instead of an epic battle, you just have to roll one bat signal in order to beat Penguin. It is the perfect end to a boring board game to have a really dull final battle. It is a shame that the final battle with Penguin is so boring since it has huge implications on the outcome of the game. Unless the player who eventually beats Penguin picked up no tiles, whoever beats Penguin is basically guaranteed to win the game. This means that if someone loses to Penguin everyone should immediately rush to try and beat him. The rest of game basically means nothing since you get no advantage in the battle by collecting tiles. A player can basically do next to nothing prior to the battle and still win the game just by beating Penguin.

The fact that whoever beats Penguin is basically guaranteed to win the game cements the idea that the Batman Returns 3-D Board Game relies almost entirely on luck. Since there are really no decisions in the game you can’t implement a strategy to help you win the game. Outside of cheating (knowing where all the bat signal tiles are) you really can’t have any impact on your own chances in the game. To win the game you basically just have to roll the die and hope you get lucky.

While the Batman 3D Board Game is pretty bad I will give the game some credit where it is deserving.

First I give the game credit for having an situation where all of the players lose. For an early 1990s roll and move game there weren’t a lot of games around at that time that allowed all of the players to lose. I like the mechanic since if the game didn’t rely entirely on luck it might have forced players to somewhat work together so all of the players didn’t lose. Since the game relies on so much luck though this mechanic doesn’t really add anything to the game other than being a gimmick. For the most part it won’t even come into play since each game is so short.

This brings me to my next positive for the Batman Returns 3-D Board Game, the game’s length. I would say that most games should only take around 10-15 minutes. The game isn’t much fun but it is quick and to the point. Players can learn the game in minutes. Unless the players have terrible luck the game should end quickly since it doesn’t take long to gather three bat signals and then beat Penguin. The game is not good but I give the game credit for not overstaying its’ welcome.

My final positive for the game is the fact that for a 1992 movie tie in game, the component quality is actually pretty decent. Most of the components are cardboard but the cardboard is of a decent quality. The best thing about the components is the 3-D board. While the 3-D gameboard doesn’t really impact the gameplay, I have to say that it looks nice. 3-D gameboards are something that I miss from 1990s board games as you don’t see a lot of games utilizing them anymore.

Should You Buy Batman Returns 3-D Board Game?

Simply put the Batman Returns 3-D Board Game is not a very good game. It is basically the prototypical movie tie-in board game from the 1990s. It is a very generic roll and move game. Roll the die to move and fight henchmen. Rinse and repeat. There are basically no decisions in the entire game that aren’t either obvious or random guesses. This leads to an extremely boring board game. The only redeeming qualities is that the ability for all of the players to lose is interesting for a game of its’ age, the game is short, and the 3-D gameboard is pretty cool. Otherwise the game is not very good.

Unless you are a big Batman fan or absolutely love movie tie-in roll and move board games, I would highly recommend avoiding the Batman Returns 3-D Board Game. If you or your kids are a big fan of Batman though it might be worth picking up if you can find it for cheap just for the game’s theme.

If you would like to pick up the Batman Returns 3-D Board Game you can find it online: Amazon