At the beginning of every round all of the players are dealt six cards. One of the remaining cards are turned face up to start the play field. The rest of the cards form the draw pile.

The far left card was able to be played since the brown edge matches a brown edge already in the play field.

In this situation the player is able to play a card that matches on two sides. Since the player matched two sides, all of the other players would have to draw one card.

If the player is unable to play a card, they draw a card from the draw pile. If they can play the card they just drew, they may play it right away. Otherwise they add the card to their hand. 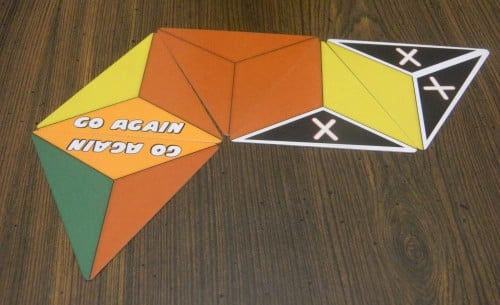 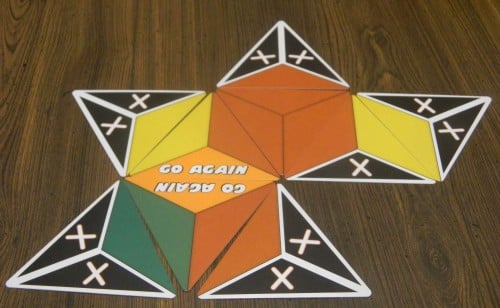 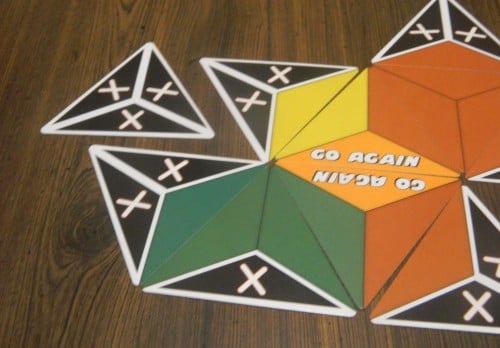 This situation represents a situation where a closer card can be played since two of the sides would match other black sides. When this card is played, the play field would be reset.

When one player plays the last card in their hand, they win the round. The winner of the round gets one point for every card still in the other player’s hands. Additional rounds are played (the winner of the last round starts the next round) until one player reaches 20 points. That player wins the game.

Nacho Loco is kind of a mix of Dominoes and UNO. Like Dominoes the goal of the game is to match similar sides of tiles/cards to build out the gameboard. From UNO it takes the color matching as well as the various special abilities on some of the cards. If you like Dominoes and/or UNO I think you will like Nacho Loco quite a bit.

Nacho Loco is simple to learn and play. You could probably teach it to a new player in a couple minutes and they will should know what they are doing after playing a couple cards. Nacho Loco has a recommended age of 8+ which I think might be a little high. I would say that the recommended age should probably been closer to six or seven. I don’t see younger kids having that much trouble with the game. You are simply matching colors/words. If you kid has played Dominoes or UNO before I don’t see why they couldn’t play Nacho Loco.

Along with being simple to play, Nacho Loco plays quickly. Each hand probably takes around 5-7 minutes to complete. If you play until 20 points the game will probably take around 30 minutes to play. The combination of the easy difficulty and short length makes Nacho Loco a good filler game. Being a filler game some people will probably not like the game because they think it is too simplistic. I agree with these players that the game does not have that much strategy. The game is still fun to play though and is a good family game that you can play without having to put too much thought into it.

Generally speaking the cards are pretty well balanced. Some cards are going to be a little harder to play than others but for the most part every card has a scenario where it works well. One thing that I was a little surprised about was that the special cards were not as powerful as I would have expected. I think this is due to the fact that by playing a word card you could be punishing yourself. Since you only get to take the special action if you are the player to match the side, you generally don’t want to be the first player to play a card of a special type. If you play a special card, one of the other players are likely to match it before it gets back to you. In a lot of cases you are actually helping out one of the other players when you play a special card.

I don’t know how I feel about this element of the game. I like that it weakens the strength of the various special cards. The draw 3 and go again cards are pretty powerful on their own. Forcing a player to draw three cards can make a player go from first place to last place really quick. The go again cards are also powerful since every extra card you are able to play puts you ahead of the other players. What I don’t like about this element is that it makes players hoard the special cards until the very end in order to avoid helping the other players. One player is going to end up being the unlucky player that has to play a special card that another player will benefit from.

While I don’t have a lot of problems with most of the special cards, I think the “closer” card is too unfair. It is just too hard to get rid of and if you draw it you likely won’t be able to win the hand. The problem with the closer card is that you need to take several turns in order to try to set up the board in such a way that you can play the card and touch two black edges. This is easier said than done since other players are likely to mess up your strategy. When you actually are able to play the card, you don’t get much benefit from it.

While Nacho Loco is a fun game, it suffers like so many other card games due to its’ reliance on luck. To win you will need at least a little luck. You need the right cards at the right times. My group played about five hands of the game and one player ended up winning four of the hands. Luck was certainly on his side especially since in one of the hands every teamed up on the player and he still won the hand.

For the most part the rules are solid but I think some more work should have been put into the rules regarding the black/x sides. I like how the x spaces cut off parts of the board. They are a good addition to the game. The rules should have provided for a little flexibility though. For example there were a couple situations in the game where a player could have played a card that matched all three sides but since one side was a black side, they were unable to play the card. I think in these situations the player should still be able to play the card.

Another issue I had with the game is that you need quite a bit of space to play it. Once several cards have been played, the play field can take up quite a bit of space. You don’t need to play the game on a huge table but you may run into some issues if you play on too small of a table.

I also thought the theme was pretty bad. The theme is barely present in the game. The only reason it is called Nacho Loco is due to the triangle shaped cards. Other than the shape of the cards, it does not affect the game at all.

Overall the components are solid. The cards are made of solid card stock. The game includes a lot of cards so you can probably play at least two to possibly three hands before you will have to shuffle the cards again. Due to the shape of the cards though, shuffling is an issue. It is hard to shuffle triangle shaped cards. The only way to shuffle the cards is to spread them all out on the table and mix them up. The artwork is also pretty basic. The cards are really easy to read but they are kind of boring to look at.

Nacho Loco is a pretty typical filler game. The game doesn’t have a lot of strategy but it is simple to learn and quick to play. It is also fun to play. While it is not fantastic, I think it has its’ place as a quick filler game that would work well with families. If you don’t like UNO or Dominoes you probably won’t like the game. Otherwise I think you should get some fun out of the game and since it is currently so cheap online I think it is worth picking up.