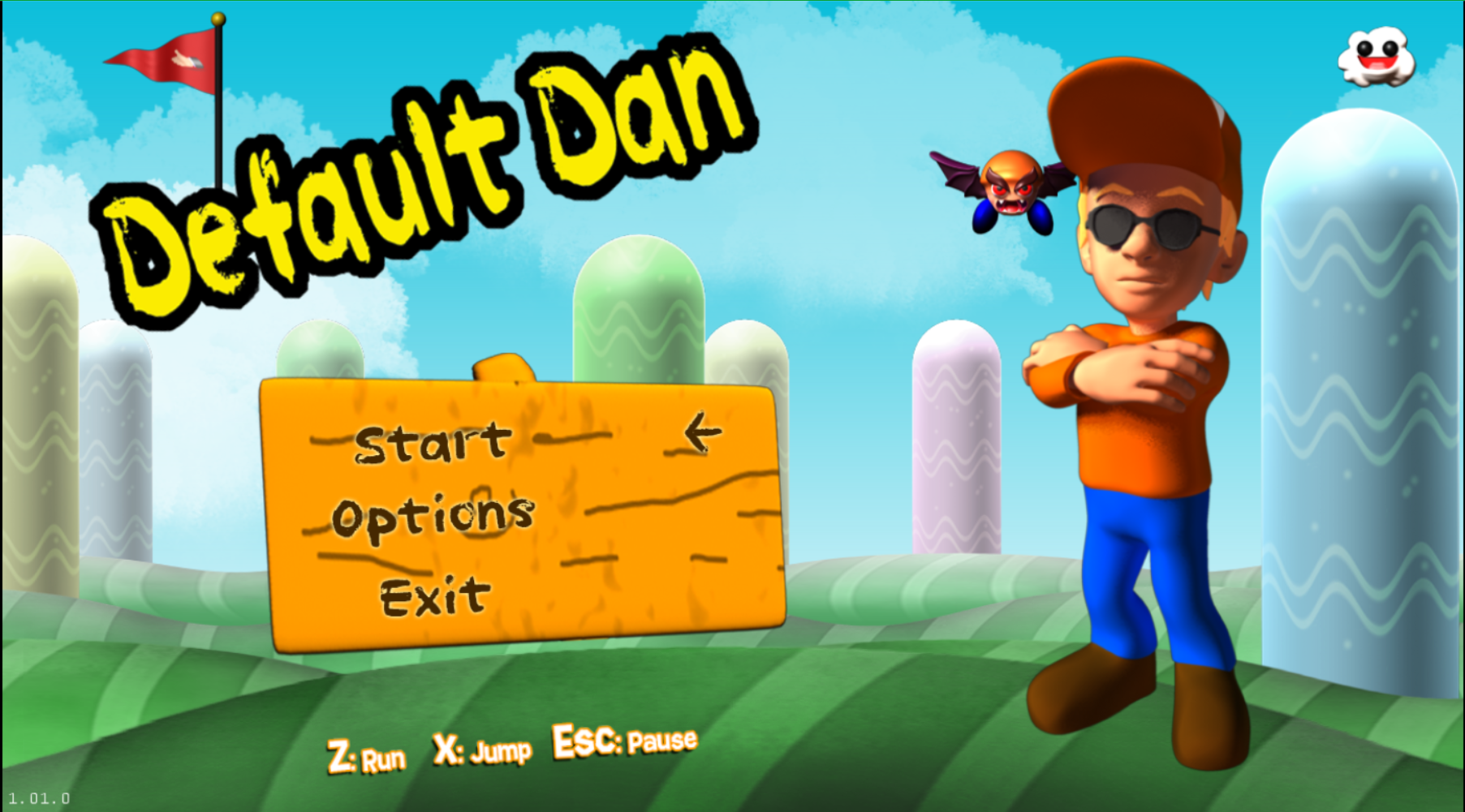 Ever since the beginning of the platformer genre, several ideas have been planted into our heads. For example coins are good, don’t fall down pits, avoid spikes, etc. Being a big fan of the platformer genre these tropes are well ingrained in my head. Now what if a game decided to flip all of those preconceptions. This brings us to the game Default Dan.

In Default Dan nothing is what you expect. Take everything you have learned from Mario and throw it out the window. Your best friend, a dragon/monster (a parody of Bowser from Super Mario Brothers), is kidnapped by the princess. You as Dan must traverse the strange world to rescue your best friend. Some of the many differences you will encounter in the game include:

With a game like Default Dan, the premise is the main selling point of the game. When I first saw the game, the concept seemed interesting and is the main reason why I purchased the bundle that Default Dan was part of. I thought it would be interesting to play a game where everything is the opposite of what you would expect. For the most part the concept works pretty well and leads to a fun and interesting experience.

Playing a game where everything is opposite of what we expect really shows how some things have gotten ingrained into our heads regarding the platforming genre.  Especially in early levels you will die many times trying to do something that you are expected to do in traditional platformers. Even if you know that you are supposed to avoid the coins, you will naturally gravitate towards collecting them. At first you will be leery about jumping down pits. There will be some instances were you will keep dying and you won’t know what you are doing wrong. Most likely you are dying because you are collecting coins without even noticing it. At times the game does a good job utilizing this fact to create some interesting puzzle/platforming sections.

The gameplay for the most part in Default Dan relies on a lot of trial and error. You will try something and it will fail because you forgot about one of the changes. You then try something else and something new goes wrong. You eventually figure out the correct solution and you proceed onto the next puzzle.

I would say that Default Dan is a moderately difficult platformer. It is kind of like an easier Super Meat Boy. You die a lot like in Default Dan but you don’t need to be quite as precise as you have to be in Super Meat Boy. There are some frustrating times though especially with the last boss fight. At times you will keep failing a section that you knew what to do but weren’t precise enough.

One thing I found to be weird about the game was the fact that whenever you die, Dan explodes into a bunch of pieces. I really don’t get the reasoning behind this. The game doesn’t have any blood but I find it questionable for younger children to play a game where the main character explodes into a bunch of pieces every time he dies. If the game wanted to do the opposite of the norm they should have had the character float off the top of the screen when he died instead of the bottom like the norm.

The biggest problem I had with the game is that at times it just felt unpolished. The game was made by a smaller studio and you can tell. There are the collision detection issues I have already mentioned. I thought the graphics were okay but could have been a lot better. Default Dan also relies on using the same “puzzles” a little too often. With a few more mechanics, more variety could have been added to the game. These issues don’t ruin the game but they do keep it from being anything more than an average game.

To beat the main game it took me around 1.5 to 2 hours. The main game contains ten levels and two boss fights. If that sounds short, it is. The game does include “bonus” levels though. Like a lot of platformer games, Default Dan has a “dark” world. In order to unlock the dark world levels though you need to get enough stars in the levels of the main game. I only ended up playing one of the bonus levels because I didn’t want to waste the time to go back and collect enough stars to unlock the other levels.

I just didn’t feel like it was worth my time to go back and try to get more stars since the stars appear to be awarded based on how quickly you finished a level. You will likely earn zero stars on the first time you play every level since you need to move through the level quickly in order to unlock the stars. In order to unlock all of the levels you likely will have to get at least two stars on every level which will require that you replay every level multiple times.

If you want to put in the time to unlock the bonus levels you are likely to at least double the length of the game. The one bonus level I did play was interesting and fun to play. If I wouldn’t have had to waste so much time replaying levels I would have played all of the bonus levels. The time and frustration that would have been required to unlock the levels were not worth it in my opinion though.

Default Dan is a pretty average game. The concept behind the game is creative and at times is used well to create some interesting puzzles. If you like platformer games you should have some fun playing the game. The game can be frustrating at times though and it does lack polish. I personally don’t think it is worth its’ retail price of $6 (on Steam) due to its’ length. If you like platform games and the concept sounds interesting to you, Default Dan is probably worth looking at if you can find it in a game bundle or on sale.