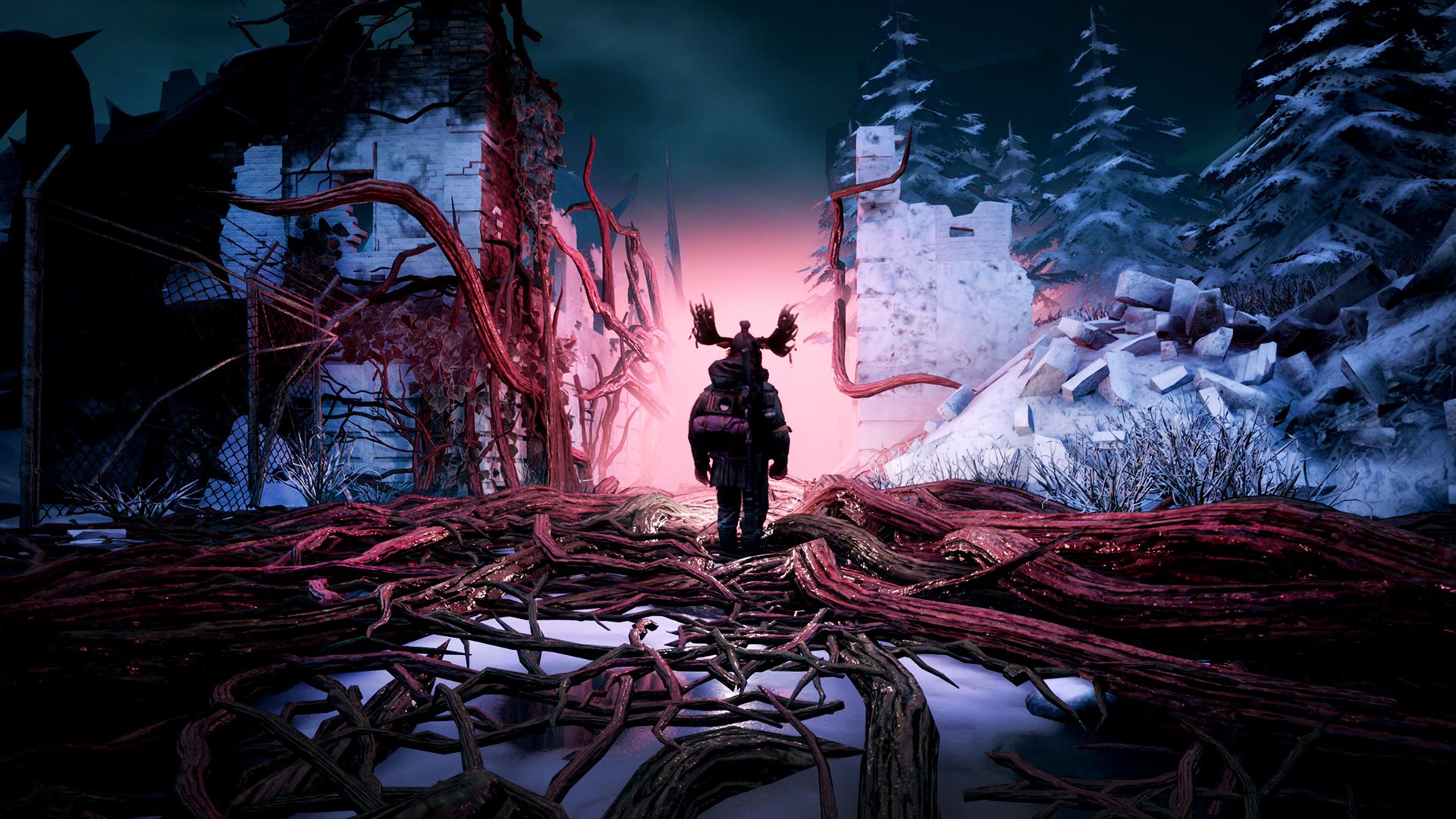 Last December I took a look at the indie turn based stealth strategy game Mutant Year Zero Road to Eden. I was genuinely surprised by the game as it was better than I could have ever expected. When the game ended though I was a little disappointed because I didn’t want it to end and it kind of ended on a cliffhanger. For this reason I couldn’t wait for some DLC or a sequel. After a little over half a year we finally have our first set of DLC for the main game, Seed of Evil. Mutant Year Zero: Seed of Evil is basically what you would expect out of a DLC as it expands on what made the original game so enjoyable, but it doesn’t drastically change anything about the game.

Mutant Year Zero: Seed of Evil picks up right after the cliffhanger of the main game. As they are exploring the wasteland; Dux, Bormin, and the rest of the gang encounter strange roots growing throughout the zone. These roots seem to infest anything they touch turning them into husks of their former selves. As these roots encroach on the Ark you are sent out on a mission to the north to find the source of the roots. Will you be able to stop the growth of the roots before they fully take over the Ark?

As I reviewed the base game a while back I am not going to spend a lot of time talking about the gameplay. This is mostly because the gameplay is pretty much the same as the original game. If you want a lengthier explanation of the gameplay check out my previous review. Basically the gameplay is a combination of stealth mechanics combined with a turn based strategy game. You explore the world looking for scrap and other items that you can use to upgrade your characters’ gear. You need to be stealthy though to avoid the enemies detection. Using stealth you can also sneak up on enemies to get a preferential location to give you an advantage in combat. When combat begins it becomes a grid-based turn based strategy game. You can move your characters around the grid to position them to fire on enemies. Your likelihood of hitting enemies is based on the positioning of the shooter and the target.

For those of you who haven’t read my review of the base game, I loved Mutant Year Zero: Road to Eden. The game did a great job combining a lot of different things together to create a really satisfying experience. Combining a real-time stealth mechanic with a turn based strategy game worked seamlessly. It was so satisfying using the stealth mechanic to sneak around enemies while getting yourself into an advantageous battle position. The game’s atmosphere and characters were great as well. The game created a post apocalyptic world that I wanted to explore. This is all present in Mutant Year Zero: Seed of Evil as outside of a few new abilities and weapons the gameplay is exactly the same.

The most noticeable addition is the new story/locations. The DLC brings you to the north of the wasteland. This new area of the map includes seven new locations. A couple of the locations relate to the continuation of the overall story. The rest of the locations are like the locations you would visit in the main game to level up and acquire goods. For the most part I liked the new locations. The game continues to do a good job utilizing the post apocalypse theme to turn everyday locations into wasteland battlefields. A lot of the new locations are quite large and include a lot of enemies. This leads to quite a few choices on how you want to approach attacking enemies.

In addition to new locations the game also gives you a reason to revisit locations that you cleared in the main game. Every so often you will get a call from Pripp telling you that ghouls and other enemies have taken over areas that you have already cleared. Basically there is nothing special about these new challenges. The locations are basically the same except that you will now have to fight more enemies that are more powerful. This is not a bad addition as it adds more gameplay to the game. It doesn’t add a lot to the game though as you are just revisiting old locations with new enemies to fight.

These two additions add a majority of the new content to the game. I enjoyed the new areas and returning to areas from the original game. Unfortunately I was a little disappointed by the DLC as well. I would highly recommend completing the original game before playing Mutant Year Zero: Seed of Evil for two reasons. First the end of the main story will be spoiled almost immediately by the DLC. It is also beneficial to have your characters at high levels as the levels of the enemies pick up right where they left off. While you basically have to play through the original game to play Mutant Year Zero: Seed of Evil, it does lead to some issues as well.

As you likely will already be at a pretty high level. you will have unlocked all of the abilities and already have a pretty powerful arsenal. This creates a problem for the DLC as gaining levels and acquiring weapons becomes kind of pointless. The game introduces a couple ability upgrades for all of the characters. These upgrades make the abilities more powerful. You will quickly acquire enough experience to unlock these new abilities. After that gaining levels basically does nothing for you in the game. You will also acquire some weapons and equipment. If you acquired the best equipment from the main game you won’t even use most of these new items. Outside of a couple small changes I basically picked up from where I left the main game and didn’t really change much while playing the DLC.

I also found the story to be a little disappointing. One problem that I had with the main game is that it kind of ends in a cliffhanger. The DLC picks up immediately after the end of the main game which answers some questions. It doesn’t answer a lot though. Honestly the DLC feels like more of a side quest. It feels like it is a small adventure rather than the continuation of a much larger story. The story in Mutant Year Zero: Seed of Evil is fine, but I don’t think it lives up to the original game. Fans of the original game should enjoy it but might wish there was more to it.

The final addition to the DLC is the addition of a new character that joins your team. Mutant Year Zero: Seed of Evil adds Big Khan the moose who is a veteran stalker that has explored the zone by himself for a long time. Big Khan mostly specializes in critical hits as well as having a couple abilities that allow him to target multiple enemies at the same time. While Big Khan has a couple unique new mechanics, he doesn’t play drastically different from other characters already in the game. His skill tree actually shares quite a bit in common with Farrow. The character design is pretty cool and Big Khan is an interesting character that many people will like. He doesn’t drastically change the story or gameplay in any way though. You could technically play the entire DLC without even using him once.

As far as the length of Mutant Year Zero: Seed of Evil it is obviously quite a bit shorter than the original game. The amount of time you get out of the game is going to depend on quite a few things. The DLC adds seven new areas to the game and gives you a reason to re-explore five old locations. Quite a few of these areas are optional though. As you don’t really need them to increase your level/acquire more items, if you want you could skip over a lot of the new material. If you skip some of this material the DLC is going to be significantly shorter. The length is also going to depend on what difficulty you play the game on and how much time you spend exploring. Ultimately I would guess most players would get around three to seven hours out of the DLC depending on their playstyle and whether they fully explore all of the new content.

Mutant Year Zero: Seed of Evil is basically what you expect out of a DLC. It doesn’t drastically change the original game but it adds more content. It keeps the great gameplay and atmosphere from the original game. Meanwhile it adds some new interesting locations to the game while giving you more challenging enemies and battles to deal with. The new locations are interesting and give you some fun new battles. The game even gives you a reason to revisit old locations. The new character that is added to the game is also pretty cool even though he plays pretty similar to some of the other characters. While the story is good, it isn’t as good as the base game and feels like more of a side quest than a continuation of the main story. The game also doesn’t really reward you for gaining new levels since if you completed everything in the main game you won’t really upgrade your characters much in the DLC.

The Church in the Darkness Indie Game Review