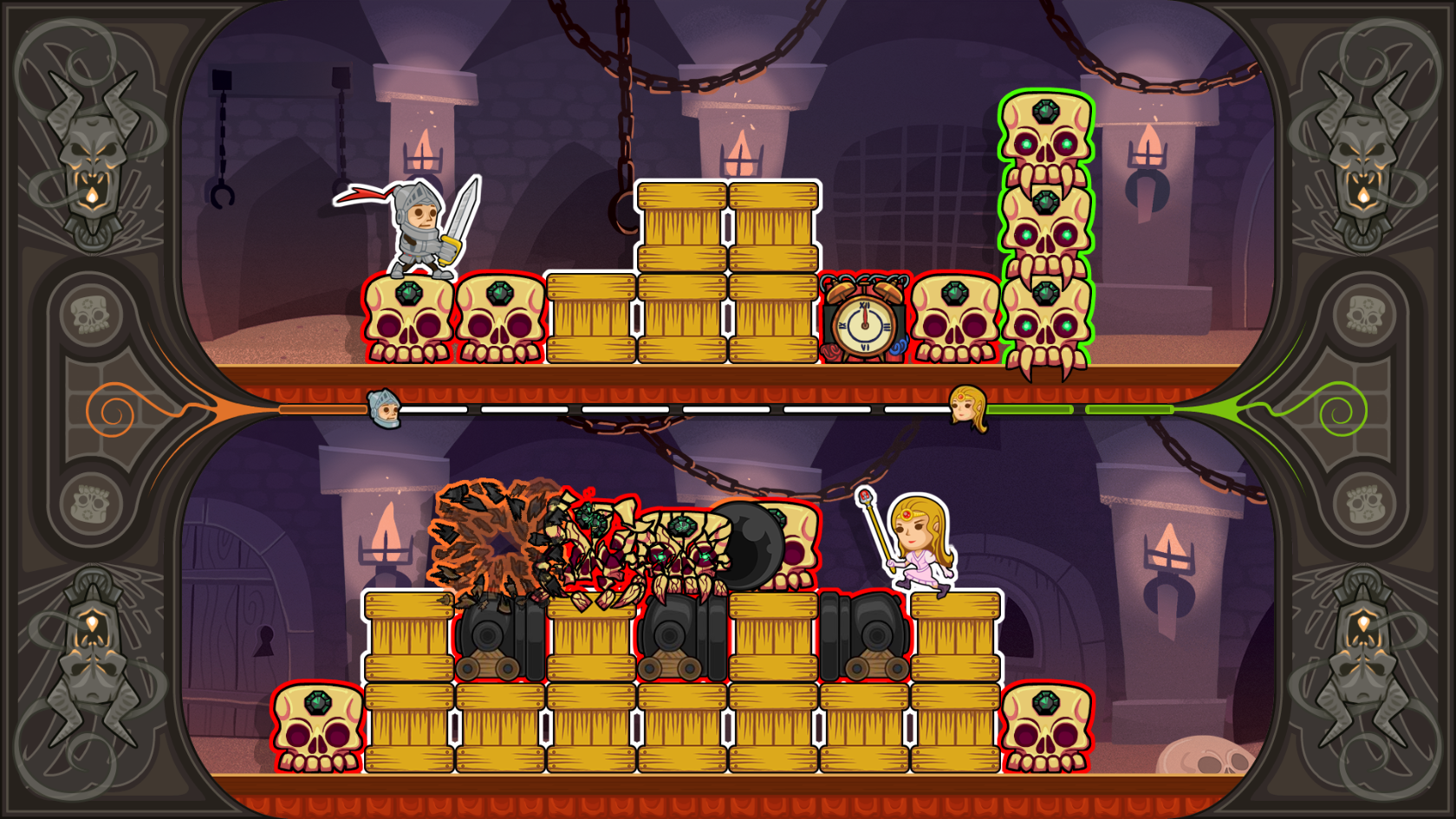 One of the longest and most criticized tropes in video games is the damsel in distress trope. From Mario saving Princess Peach to Link saving Zelda, the fallback plot of way too many video games has been to have the hero go on a quest to save a defenseless woman who has been kidnapped. Due to the limitations of video game hardware in the earlier days games usually had to rely on simple storylines and the hero saving the princess was a pretty simple story to tell. Unfortunately while the technology has improved, this trope is still pretty prevalent in video games even to this day.

Recently some indie studios have decided to try and make some games that put a twist on this tired video game trope. One of these games is called Knight & Damsel which was recently released on Steam. While it is not the type of game that I would play for hours at a time, Knight & Damsel is a cute charming little competitive casual puzzle game.

Whats a competition without some cheating though. Being so competitive the knight and damsel have no problems hindering their competitor in order to win. On each player’s track there are obstacles outlined in red. These objects can be thrown from one players path onto the other players path. These hazards will end up either slowing down the other player or they could even hit the other player which will send the player back a screen.

Players continue moving towards one another until they finally meet. If one player made considerably more progress towards the other player, they will “rescue” the other player and will win the round. If both players meet roughly in the middle of the screen there is a sudden tiebreaker where both players play a little game where they try to “save” one another. I didn’t really understand what you were supposed to do in this little mini game.

For the most part Knight & Damsel plays like a block puzzle game. You need to find the best way through the obstacles as you race towards the other player. This requires thought as you try to come up with the best route through each section of the stage since time is key. Just moving through the hazards quickly is not enough. In order to win a round you need to mess with your competition. When moving over hazards you need to plan out what you are trying to do. Since you can always figure out where your hazard is going to go on your opponents side (will be placed in the lowest position on the same horizontal space that it was on your side), you can use this opportunity to place the hazards at the perfect time and place in order to hit your opponent or cause the most havoc.

Knight & Damsel has two gameplay modes. First there is campaign mode. Campaign mode is essentially a tournament mode where you play all four different maps and a winner is determined by who does the best in all four levels. There is also an arcade mode which allows you to pick the stage and what hazards you want to be available in the level.

I liked that the gameplay in Knight & Damsel is simple enough that you can pick it up really quickly. This is the type of game that you could play with someone who doesn’t regularly play a lot of video games since you mostly just move around the stage and occasionally push a button in order to clear/move obstacles. While the game is simple to play, the game also has a decent amount of strategy since if you time a hazard correctly you can gain a big advantage in the game.

I had fun playing Knight & Damsel which is not that surprising since I generally like playing co-op games. Knight & Damsel is not the type of game that I would play for hours at a time though. I would probably play it for 15-30 minutes every so often and then come back to it on another day.

One of the main mechanics in Knight & Damsel is a “take that” mechanic where you try to mess with your opponent as much as possible. I like the general idea behind this but the game can run into some problems where the rich get richer. Once a player gets a lead they will generally extend that lead which leads to quite a few blowouts.

The reason this occurs is that the hazards seem to have a compounding impact. When you get hit by a hazard you are sent back a screen and you are stalled for a while. This gives the other player a perfect opportunity to throw a bunch more hazards at you which could send you back even more screens. In one game I think I was hit by three obstacles almost consecutively which sent me back three screens. There was nothing I could have done to avoid the second and third obstacle either. A game that was actually quite close quickly turned into a blowout just because I got hit by one obstacle.

Some of the obstacles are much more difficult to avoid than others. Some just get in your way which slow you down. Others will actively try to kill you and send you back a screen. If your opponent is smart they can do a good job setting up the obstacles which will make it impossible to avoid getting hit.

One of the first things you notice while playing Knight & Damsel is that the game is really charming/cute. The game takes place on a papercraft stage. The visual style kind of looks like you are playing inside a pop up book. For a 2D game the graphics are really nice which just adds to the charming atmosphere of the game. One thing I really liked about the game was the twist on the traditional video game trope of the knight always rescuing the princess. This game does a good job showing that a woman is just as capable of saving the knight as the knight is capable of saving the princess.

If you currently look at my Steam profile it will tell you that I have played the game for less than an hour. While this might not look good for the game, it does a good job showing what I mentioned earlier about playing the game in short doses. If you played the game for hours at a time you would probably get sick of it pretty quickly. The game just plays better in 15-30 minute sessions.

Knight & Damsel doesn’t have a lot of different features but it is the type of game that you could keep playing and never have the same experience. There are only four stages and probably around twenty different hazards but Knight & Damsel does randomize the layout of hazards for every single game played. If you are the type of gamer that doesn’t like to just play the same thing over and over again you might not get a lot of time out of Knight & Damsel. If you like puzzle games like this though I think you could get quite a bit of enjoyment out of the game. At a retail price of $10, if you think you wouldn’t get bored of the game quickly I think you could get your money’s worth.

Knight & Damsel is an interesting little competitive casual puzzle game. The game is really charming and is actually pretty fun in short doses. The game is really easy to play so it could work really well with someone that doesn’t traditionally play many video games. While simple to play, the game also has some strategy as you try to place hazards on the other player’s screen in order to cause the most chaos. Knight & Damsel is the type of game that I would play in short doses instead of for hours at a time.

If the concept doesn’t really interest you, I don’t think the game will change your mind. If you like casual competitive puzzle games though you will probably enjoy Knight & Damsel. You need to have other people to play the game with though since this is an uncooperative game that you can’t really play by yourself.