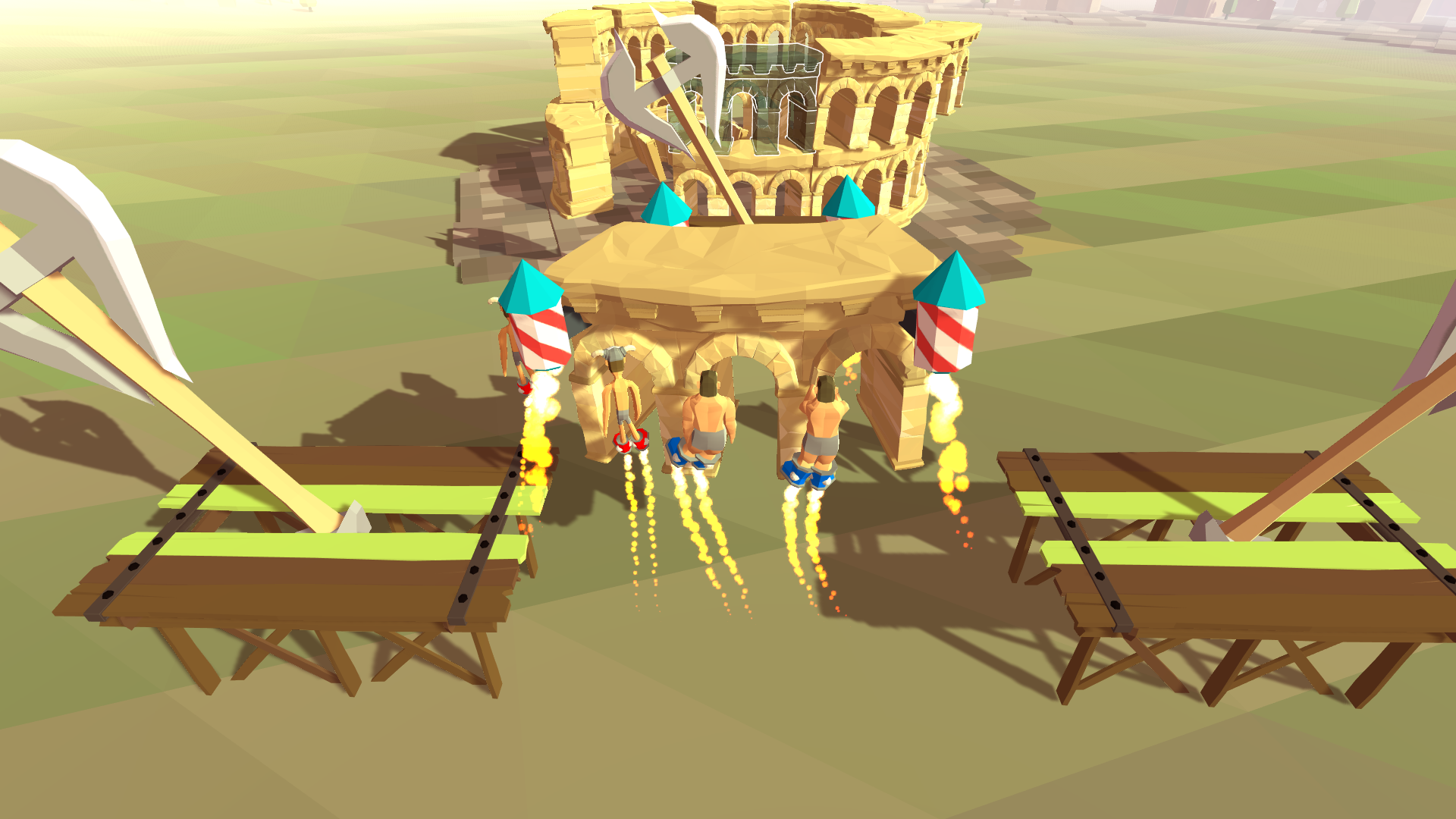 One of the greatest archeological mysteries of all time was how monuments like the Great Pyramids or Stonehenge were created by people with just a fraction of the knowledge and technology that we have available today. While most people would believe that these civilizations were just more advanced than we give them credit for, there are many conspiracy theories out there about aliens helping to create these structures. What if I told you that these ancient monuments were built with trampolines, jetpacks, Segways and many other unconventional methods? Monument Failure wants to take you to a world where this happened as you help the builders create these ancient monuments. While Monumental Failure’s premise might sound completely ridiculous, there is a surprisingly fun multiplayer experience hidden underneath.

When I first saw Monumental Failure the first thing that stood out to me was the complete randomness of the game. Basically the whole premise of the game is to help build famous monuments from the past. While you will occasionally use methods that the builders actually used like ramps, things get much more ridiculous when you use items such as trampolines, jet packs, slingshots, among other methods that the original builders most certainly did not use. Your goal is to use these wacky methods of moving blocks to try and recreate the monuments as accurately as possible.

While the game is not as wacky as I was originally expecting, the game’s wackiness is possibly the game’s greatest strength. The game is not meant to be serious and the game was designed with that in mind. The game can feel unfair at times as things outside your control can easily ruin your score. If you are a perfectionist who wants to receive a perfect score, Monumental Failure is going to frustrate you as I think it is impossible to get a perfect score in the game.

While it feels good to succeed in the game, it sometimes is just as fun to fail spectacularly. In Monumental Failure it is more of a question of when not if you are going to fail. You are almost guaranteed to have at least one piece of the structure end up nowhere near where it is supposed to be. This leads to quite a few laughs especially if you are playing the game with another player.

It Never Felt So Good To Be On the Ground

Monumental Failure’s whole premise revolves around being quick to pick up and play. This is emphasized by there only being two controls in the entire game. Using a controller (which I highly recommend) you use the right and left sticks in order to move your characters around the stage. There is also a confirm button that locks the piece into position when you are “satisfied” with its’ position. That is all there is to the controls. The control scheme is so simple that someone who rarely plays video games can quickly pick up a controller and know what they are supposed to do.

As far as how well the controls work, it is kind of hard to judge. While the controls are kind of loose on purpose to serve the premise and lead to more spectacular failures, when your characters have their feet on the ground the controls work pretty well. In these instances you usually can’t blame your failures on the controls as the joysticks do a pretty good job controlling the characters.

The problem is that once your characters leave the ground the controls get significantly worse. Throughout the game there will be challenges where you use helicopters, jet packs and other flying gadgets. The controls on all of these could have used some work. For example I have played the challenges using the helicopters many times and I still don’t know how to control them. It is like the helicopters have a mind of their own. While these lead to hilariously bad failures, these controls get frustrating as it feels like you have no control over your characters. Some of the challenges just feel like they are set up where you need a lot of luck to have a chance at succeeding.

Bring Along a Friend

Will These Monuments Last the Test of Time

While I had a lot of fun with Monumental Failure, there is one somewhat significant issue with the game. Monumental Failure currently only has six world monuments with each monument being comprised of ten different challenges. Each monument probably takes around five to ten minutes to complete. You begin the game with only one monument unlocked and as you gain stars (up to three for each monument) you unlock additional monuments. While you will fail dramatically you can unlock a lot of the monuments pretty quickly. In about an hour and a half I was able to unlock all but one of the monuments.

With only six monuments you will be playing the same levels over and over again. While each monument is really fun to build and the challenges are well designed, there just aren’t enough of them in the game. While you can continue to try and improve your score there is only so many times that you can play the same monuments and not get a little bored. This is the main reason that I see Monumental Failure being a game that you play for a half hour to an hour at a time and then bring out another time. I just don’t see it being a game that you are going to want to play for more than an hour at a time.

Monumental Failure has two issues that keep it from being a perfect game though. First the controls can be kind of hit and miss. The controls are usually pretty good but every challenge that involves being off the ground has control issues. The game also doesn’t have enough monuments. With only six monuments you will have to keep playing the same monuments over and over again. To avoid the repetition Monumental Failure works better as a game that you play for thirty minutes to an hour at a time. The lack of monuments is a shame because I probably would have given the game at least a four out of five if there was more content in the game.

If you like quirky cooperative games, I think you will enjoy Monumental Failure if you can find other people to play the game with. If you don’t find the concept to be that interesting though it might not be the game for you.