One of the leading causes for fights between players in board games are accusations of a player cheating. While there are plenty of people who cheat in board games, most people play games honestly since most games are not very fun if one of the players cheat. What would a game where cheating was an actual game mechanic play like though you might wonder? Well you can find out in Cheating Moth since cheating is not only allowed but is actually encouraged. While the rest of Cheating Moth could have used some work, I never thought I would have so much fun cheating in a card game.

How to Play Cheating Moth

The oldest player will be the first guard bug and takes the guard bug card to show their role. 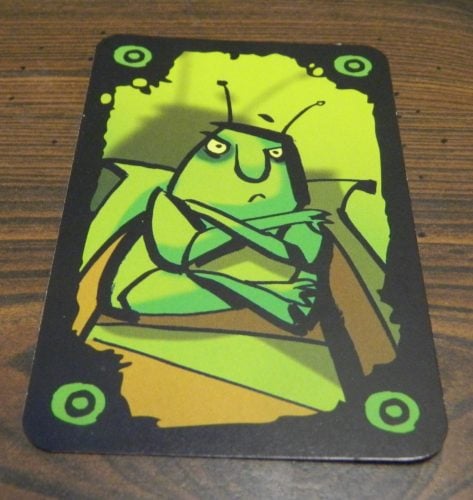 The oldest player will shuffle all of the other cards and deal eight cards to each player. The rest of the cards form the draw pile with the top card being flipped over to start the discard pile.

The top card on the discard pile is a three so the next player has to play either a two or a four.

Outside of the normal numbered cards there are a couple unique cards which have special abilities:

At the end of a round this player had four cards remaining. The player would score -1 point for the first two cards, -5 for the third card, and -10 for the fourth card for a total of -17 points.

A new round begins with the player to the left of the player who started the last round as the guard bug becoming the new guard bug.

While cheating is frowned on in most games, it is encouraged in Cheating Moth. If you are not the guard bug you can cheat  to get rid of cards in anyway you want. Some examples include:

Players can cheat as many cards as they want as long as they follow a couple rules.

Since players can cheat as often as they want in the game, the guard bug is responsible for trying to catch them cheating. At no point can the guard bug cheat but if they catch another player cheating (in the act) they can call them out. If a player is called out for cheating and they were cheating, the card that the player was trying to get rid of is returned to their hand. The guard player gets to give the cheating player one of their cards the the caught player becomes the new guard bug. If a player is accused and they weren’t cheating, the guard must draw the top card from the draw pile and they remain the guard bug.

The players play as many rounds as there are players. When all of the rounds have been completed the player with the least negative points wins the game.

My Thoughts on Cheating Moth

Since I had never seen a game before that actually allowed cheating, I really didn’t know what to think of this mechanic in Cheating Moth. The mechanic sounded interesting and yet I was worried that it would ruin the game. After playing the game I was surprised by how much I enjoyed it. While cheating is frowned upon in most games, it is the one thing that makes Cheating Moth stand out. I never knew how much fun and satisfying it could be to find as many creative ways as possible to cheat and get away with it. I enjoyed the cheating mechanic so much that I wonder why it really hasn’t been used “legally” in other games.

If the fact that Cheating Moth allows you to cheat was not enough, Cheating Moth actually actively encourages you to cheat. Unless you are terrible at cheating and are constantly caught, there is no reason not to cheat in the game. I honestly don’t see a player winning a round if they don’t cheat. The game even occasionally forces you to cheat since you usually can’t get rid of a Cheating Moth card without cheating. The cheating mechanic actually helps reduce some of the luck that would normally be prevalent in this type of game. While luck is still very important, if you are dealt bad cards you could just cheat to get rid of them.

Before playing the game I thought it would be quite hard to cheat in the game. My experience playing Cheating Moth tells me the opposite though. I think cheating in the game is easy because there are ways to cheat which are hard to notice. “Accidentally” dropping cards on the floor is probably the easiest way to get rid of cards. After every round of the game you will find several cards on the floor. Another easy way to get rid of cards is to hide a card under the card you are playing thus playing two cards instead of one. Add in the fact that you can do several other things when the guard is distracted and it is quite easy to cheat and get away with it.

While it is really fun to cheat, I will admit that it is not nearly as fun playing as the guard. Either my group is really good at cheating or really bad at catching people cheating because players were rarely caught in the act. While it is interesting trying to catch players in the act, it is not easy to do so. The problem is that it is really hard to pay attention to all of the players at the same time. This becomes even harder when you have to look at your own cards to choose which card you are going to play on your own turn. Basically you have to look at your cards with the corner of your eye while also trying to pay attention to the other players.

This cheating mechanic leads to some hilarious moments as the guard is trying to stare down the other players and yet the players are continuing to cheat right in front of them. It is hard not to start laughing when you get away with cheating when everyone but the guard saw what you did. It is always funny to see the guard react when they see multiple cards lying on the ground from multiple players cheating right in front of them. Then there are the moments when you do a good job cheating and unforeseen circumstances tip your hand. For example in one round I dropped a card on the floor which usually worked well except that in this instance the card hit the table leg making a noise which notified the guard to what I was doing.

While the cheating mechanic is quite entertaining, it does present a couple issues for the game. Most of these issues come from the lack of clarification on what is and is not allowed as far as cheating. For example while you can only cheat one card at a time, can you keep cheating or is there a limit on how quickly you can cheat another card? We ended up implementing a rule where a player could only cheat one card for each card that was played to the discard pile. There is also a question of how quickly a player has to recognize the cheating in order for a player to be caught. Does cheating have to be discovered in the act or is shortly after still acceptable? In order to prevent arguments, players need to come up with their own ground rules for cheating before starting the game since the game’s instructions aren’t particularly descriptive in this area.

While I had a surprising amount of fun with Cheating Moth, I have no problem admitting the game is kind of a one trick pony. If you take out the cheating mechanic, there is nothing unique in Cheating Moth. As a matter of fact the game plays like many other simple card games where you play cards higher or lower than the current card with a couple cards having a special ability. There is nothing particularly wrong with these mechanics as you can have some fun with them but they are kind of generic and boring. Basically if the cheating mechanic doesn’t appeal to you Cheating Moth really doesn’t have anything to offer that can’t be found in many other games.

It is a shame that the rest of the game really lets down Cheating Moth. The cheating mechanic is so enjoyable that it is disappointing that there isn’t much else to go with it. Cheating Moth could have been a significantly better game if there was just a little more to the game other than cheating. I would really like to see a game take the cheating mechanic and add a more complex game to it to see how good Cheating Moth could have been.

As far as the components, they are solid. The artwork is pretty nice but the cards aren’t particularly special in any way. Space conscious people will really appreciate how small the game’s box is. I will forewarn people though that I see a strong possibility that cards could easily get lost or damaged due to how players try to cheat cards. This is a game where if you don’t look for all of the cards after the game you might end up finding cards hidden in the cushions or other pieces of furniture at a later date. I honestly would recommend counting up the cards at the very least at the end of the game and maybe after every round to make sure none of the cards go missing.

Should You Buy Cheating Moth?

Cheating Moth is not a perfect game but it is a fun game nonetheless. Cheating Moth is a game that shows allowing cheating can be a fun game mechanic. It is a blast trying to hide and get rid of cards without the other players figuring it out. While the cheating mechanic is really fun, Cheating Moth kind of dropped the ball on the other mechanics since it is a very generic card game. There is nothing particularly wrong with the rest of the game but the game could have been much better if there were a few more mechanics in the game.

If the idea of being able to legally cheat in a card game doesn’t appeal to you, Cheating Moth is probably not going to be for you. If the idea of using cheating as a game mechanic interests you though, I think you will get a lot of enjoyment out of the game.

If you would like to purchase Cheating Moth you can find it online: Amazon