While moving forward, if a mouse lands on another mouse the moving mouse moves forward to the next open space. If moving backwards, the mouse will continue moving backwards until it reaches an empty space. 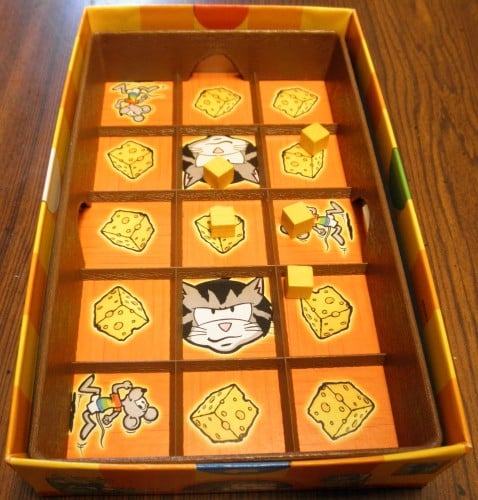 I would like to preface this review by saying that I did not play this game with any players of the target demo (kids 4-8). Therefore this review is mostly based on what the game is like for adults. Small children may enjoy the game quite a bit more than I did. As an adult I could tell that the game is pretty flawed.

The game’s core gameplay mechanic, dropping the cubes on the gameboard to determine movement, is actually a unique gameplay mechanic. I can’t think of a game that I have played before that used something similar. It may be unique but unfortunately it doesn’t really work. The main reason it doesn’t work is that at least in the game I played, almost every player got the exact same outcome or very similar outcomes. All of the players pretty much move at the same pace which means the players who get to go first have a large advantage over the other players.

Since everyone gets a similar outcome from their drops, almost all of the tension/excitement is eliminated. The game is not fun since you pretty much just drop cubes, move your piece some spaces, and wait until it is your next turn. The gameplay was monotonous and I couldn’t wait for the game to end. Fortunately the game is short. Expect games to last between five to ten minutes.

Ravensburger has a reputation of providing has high quality components for their games. For the most part Mini Cat & Mouse lives up to that reputation. I am a sucker for wooden game pieces so I liked that the “cheese” cubes are wooden. The mouse pieces aren’t the most detailed but I really have no complaints with them. The only complaint I have with the components is having to use the bottom half of the box for part of the gameboard. I am guessing that the game chose to do this to make the game more portable but I think they could have created a board to go with the game.

I do not think Mini Cat & Mouse is a good game. The core mechanic of the game is an interesting idea that never really pans out. The game is quite boring since you pretty much just drop the cubes, move your game piece, and wait while the other players essentially move their pieces the same number of spaces.

If you don’t have any small children, there is nothing in Mini Cat & Mouse that will interest you. If you have small children they may enjoy the game. Mini Cat & Mouse is more of the type of game you would just let your children play by themselves since I can’t imagine adults getting much enjoyment out of it. I know I won’t be playing the game again.