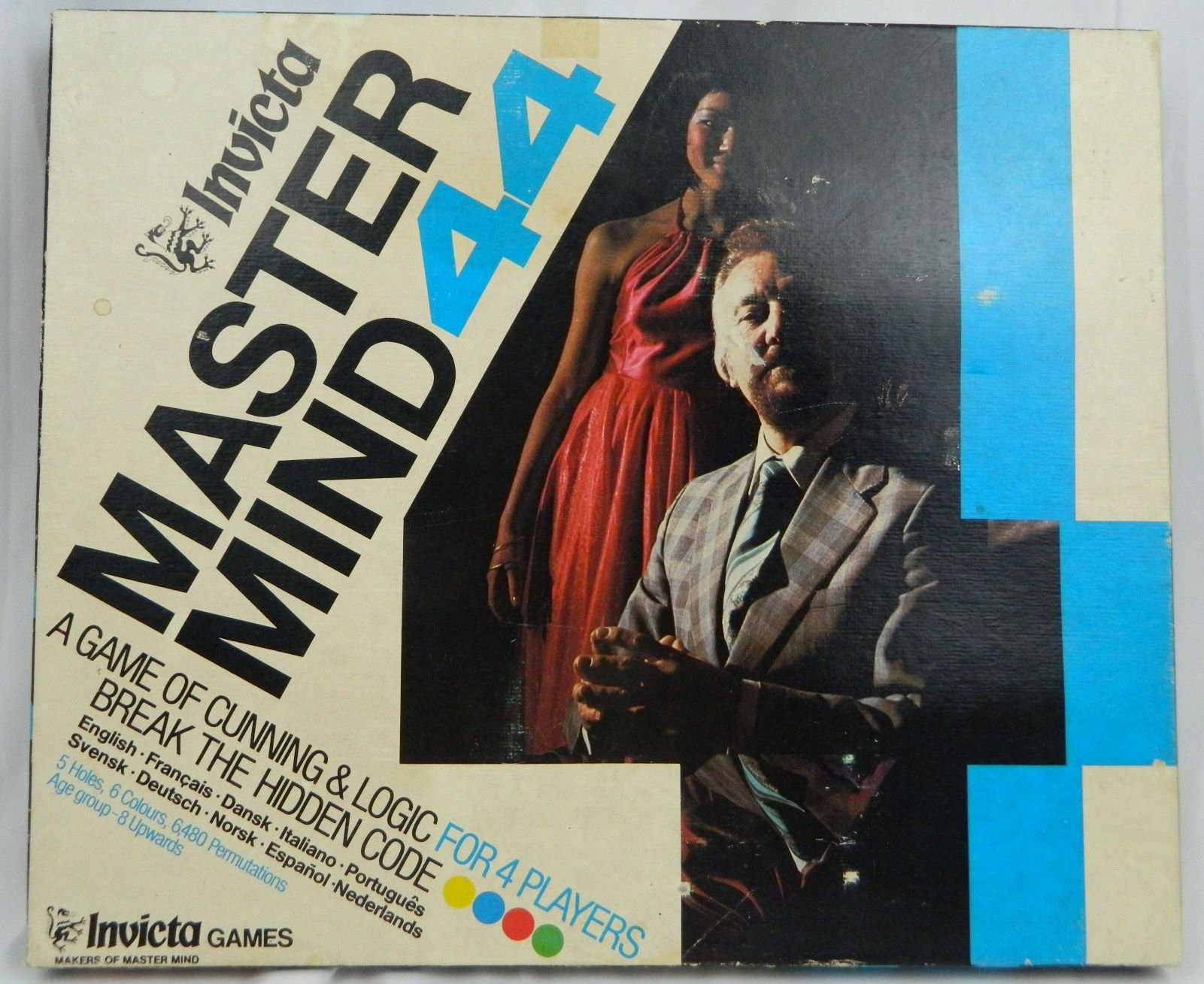 Created back in 1971, the original Mastermind became an instant hit. The premise of trying to figure out a code created by the other player was quite compelling. As a kid I was a big fan of Mastermind and still am to a degree. The problem with the original Mastermind though is that there is a strategy to the game where the player guessing is guaranteed to win as long as they follow it. This does diminish the game in a way as there is no reason not to follow this strategy. Because I like the underlying idea behind Mastermind I have wanted to check out the number of spinoff games made for the franchise after its initial success. Today I am looking at Mastermind 44. The basic premise behind the game is that it is Mastermind tweaked in order to support four players instead of two. Mastermind 44 is an interesting twist on the original game improving upon it in some ways, but also having some of its own issues.

How to Play Mastermind 44

You will begin your turn by choosing five of the rounded color pegs and place them in the lowest numbered row remaining. You will place them in an order that you think matches the secret code.

Starting with the player to your left, each player will compare their part of the code that you played to the discs that they drew at the beginning of the game. If you played the right color in their spot of the code, they will place a black key peg next to the guess to indicate that one of the colors in your code is in the right position. If you put the right color someone in your code but it is not in the right numbered position, the player will place a white key peg. If the player’s color is not in your guess at all, they will not give you any key pegs.

The next player in turn order will then do the same with their own part of the code. After everyone has compared the submitted code to their section of the code, play passes to the next player clockwise who gets to make a guess.

When a player thinks they have broken the hidden code they can choose to make a final guess. This can be done at any time in the game and they will shout out “Master Mind” to indicate that they want to make their final guess. They will then place code pegs in their top row that corresponds to their last guess. A player can either leave their part of the code blank or can put any color in its place so they don’t give the other players extra information should they be wrong. They should not place a code peg in the space that belongs to the number(s) not chosen by any of the players.

If they get any of the code incorrect though they will be eliminated from the game. They will still have to give key peg clues when players guess on future turns.

If there are only two players, both players may choose to play with one or two decoding boards.

My Thoughts on Mastermind 44

Heading into Mastermind 44 I thought I knew exactly what to expect from the game. I thought it would just slightly tweak the rules of the original game in order to allow the game to be played by four players at the same time. While this is true to some degree, I was genuinely surprised that the game actually differs from the original quite a bit more than I expected.

Basically the premise behind the game is the same as the original. You are still trying to guess the secret code by making guesses and having the other players give you information about the pegs from your code being the right color and in the right position. The area where the game differentiates itself is in the code itself. Instead of each player having their own secret code, all of the players share the same code. Each player receives one part of the code and has to figure the rest out from the other players. Instead of trying to decode a full code, the gameplay becomes more of an exercise in trying to figure out what position in the code each player has and what is their corresponding color. Additionally there is at least one part of the code that no one controls that also needs to be figured out.

This might seem like a small change, but it actually changes up the gameplay more than I was expecting. You can still use some of the strategies/skills from the original game, but they don’t work exactly the same in Mastermind 44. First you are competing against other players to solve the code so you can’t be quite as methodical in your guesses as another player could then solve it before you do. Unlike the original game, Mastermind 44 is also likely not completely solvable. Because of these things you can’t just go down a checklist like the original game, and instead have to be a little more creative in the guesses that you make. The game does a good job remaining loyal to the original gameplay while tweaking things enough to give players a unique experience.

Another thing that is really interesting about Mastermind 44 is that you can actually gain just as much information from other player’s guesses as your own. If you don’t use a combination of your own guesses along with the other players’ guesses, you are going to fall behind the other players. In fact I could honestly say that I was able to learn more from other players’ guesses than my own. Basically all of the players have a sort of shared knowledge where they end up helping one another with each guess that they make. This makes your own guesses interesting as you don’t want to give the other players more information that you receive. This is a unique twist on the original game that I generally liked.

This does introduce one issue to the game though. Maybe it was just a coincidence, but because players share most of the same information they will likely solve the code at about the same time. There will definitely be games where the last guess will give at least two players the necessary information that they need to solve the code. As the game has a rule that you can put in your final guess at any time, this creates an issue if two players want to solve at the same time. When two players want to guess at the same time, who gets to submit their guess first? We implemented a house rule that the player who submitted the last guess that lead to the players getting the last piece of information that they needed, would get to submit their final guess first as they allowed the players to make their final guesses in the first place.

After playing the game I was left wondering whether Mastermind 44 requires less or more strategy than the original game. I don’t really have a good answer to that as I think it kind of does both. In a lot of ways it requires more deduction as you can’t just brute force your way to the answer. You also need to take information from all of the players’ guesses in order to solve it. At the same time though it feels like the game relies a little more on luck. The original game really had no luck to it as all a lucky guess did was allow you to solve the code quicker. As you have less guesses in Mastermind 44 and are competing against other players, luck does play a little role as it could help you solve the code quicker than the other players.

Another issue I had with Mastermind 44 is that while it supports between two to four players, I would highly recommend playing with four players. I say this mostly because more players make the code more difficult to solve as you have to figure out more of the code. There is one spot in the code that you don’t have to solve as there are five spots in the code and only potentially four players. Each additional player that doesn’t play reduces the code that you have to solve by another spot. Having to solve only one or two of the spaces in the code just feels like you are missing something. It just feels too easy and not as satisfying. The game is okay with less players, but I wouldn’t recommend it if possible.

Should You Buy Mastermind 44?

Ultimately I am not sure whether I preferred the original game or Mastermind 44. Each game has their own strengths and weaknesses. I liked that Mastermind 44 does a good job remaining loyal to the gameplay of the original and yet changing it enough where it doesn’t feel like it is just four player Mastermind. You can use similar strategies in the game, but I don’t think it is solvable like the original game. You need to be more creative in how you make guesses. I also found it interesting that you can gain just as much or even more information from other players’ guesses as your own. Mastermind 44 is a genuinely interesting game. The game does have an end game problem though where two or more players may solve the code at the same time where you have to figure out who will get to make their final guess first. The game is also best with four players as the code is too easy to solve with less players.

My recommendation for Mastermind 44 mostly comes down to your thoughts on Mastermind and deduction games in general. If you never really cared for the original game, I see nothing about Mastermind 44 that will likely change your mind. If you like the original game and think the idea of a four player version sounds interesting though, I think you should enjoy Mastermind 44 and should consider picking it up.