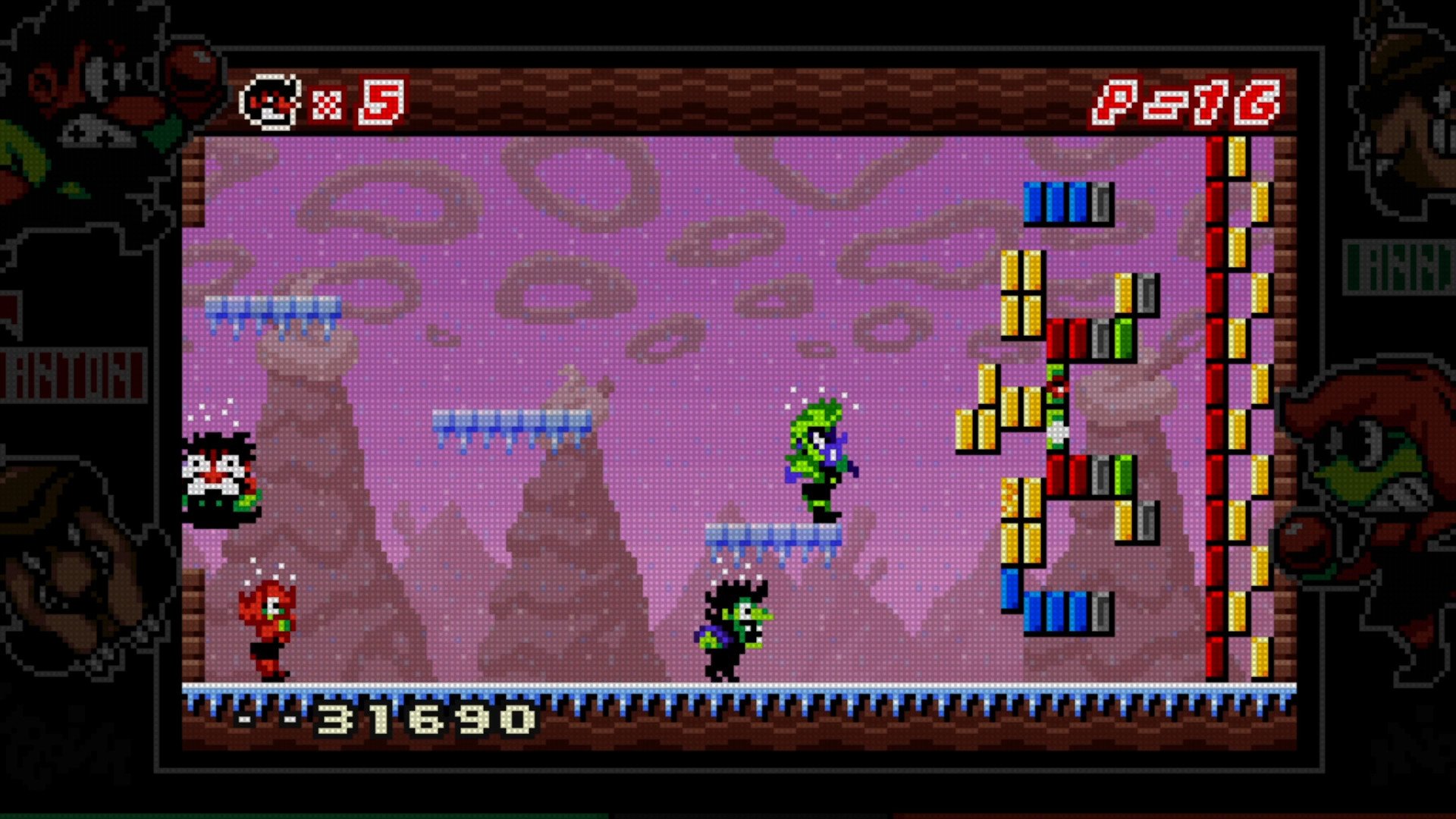 Antonball Deluxe is basically a collection of three different arcade games so I will break up this review by talking about each game individually.

Antonball is probably the biggest of the three games. If I were to describe Antonball I would say begin with the classic arcade game Breakout. For those not familiar with Breakout the basic concept of the game was to bounce the ball at a wall of bricks to break them while also preventing the ball from moving off the screen. Antonball takes the gameplay from the classic game and tweaks it. First the gameplay mostly takes place on the horizontal plane instead of the vertical plane. The bigger difference is that instead of moving a paddle back and forth to hit the balls, you will use a character that jumps around like a typical platformer. To bounce the ball back you need to hit it with your character.

It is obvious that Antonball took a lot of inspiration from games like Breakout. I was intrigued by the game though because I wondered how adding a platforming element would change the basic gameplay as instead of just moving a paddle back and forth you actually had to time your jumps right in order to be in the right position at the right times. I will say that the twist does take a little time to get used to so you don’t jump too early or late.

Outside of the platforming taking some time to get used to, I thought it was a fun addition to the typical Breakout gameplay. I will say that it makes the game a little more challenging as it is sometimes hard to time your jumps properly compared to just moving a paddle around. At first it might not make a whole lot of sense adding a platforming mechanic to Breakout but it just works. The game is fast paced as you are constantly on the move trying to hit the ball into the last remaining bricks while also preventing the ball from exiting the screen. The game keeps you on your toes leading to an exciting game. It gets even better when you play the game with another player as you work together to try to eliminate the remaining bricks. If you enjoy the basic Breakout gameplay and are intrigued by the addition of a platforming mechanic, I think you will really like Antonball.

The second game is called Punchball. This game is a twist on the arcade game Mario Bros. For those of you who have never played the original Mario Bros each stage has a number of enemies that spawn at the top of the screen and you must defeat them. If any enemy touches your character you will lose a life. To defeat an enemy you have to hit the platform below the enemy which temporarily stuns them. You then need to run up and kick them to eliminate them. Once you have defeated all of the enemies you move onto the next stage. Punchball is basically the same game except that you throw a ball at the enemies to stun them instead of hitting the platform below them.

Of the three games included in Antonball Deluxe, I actually thought Punchball was the one that I enjoyed the most. This might just be a personal preference though because I am a pretty big fan of the Mario Bros. arcade game which the game was obviously inspired by. I will say that the game plays a lot like Mario Bros. where your feelings towards that game will likely translate to Punchball. The twist of throwing a ball at enemies instead of hitting the bottom of their current platform does actually change the gameplay quite a bit though. It is a fun and interesting twist. While the early stages are very similar to the original Mario Bros., there is considerably more variety to the stages in Punchball as you progress in the game. The gameplay is still really fun and even better if you play the game with another player.

The final game is Vs. Antonball. This game shares a lot of the same gameplay as Antonball. Th main difference is that while Antonball is cooperative, Vs. Antonball is competitive. The game also adds in some mechanics reminiscent of Pong. Basically each team is given their own brick wall that they must protect, while trying to destroy the other team’s wall. Once a team loses the last brick from their wall, the other team will win the round.

Of the three games I would say that Vs. Antonball is probably the one that I liked the least. I still enjoyed the game, but I thought the other two were more enjoyable. The game is enjoyable for many of the same reasons that regular Antonball is. The basic gameplay of hitting the ball back and forth by jumping into the balls is fun. The Pong elements of the game are an interesting twist on the original game, as combining Pong with a platformer is an interesting experience. Generally if the concept intrigues you at all I think you will enjoy Vs. Antonball.

I am not sure the reason I liked Vs. Antonball the least was even the game’s fault. Generally I prefer cooperative games over competitive games so that didn’t work in Vs. Antonball’s favor. The other main factor is that I think the game will be more enjoyable with four players than two. The game is fine with two players, but I think it will be considerably more enjoyable with four as the game will likely thrive with more chaos which additional players should provide. With only one player per team there is just too much to deal with on your own where you either need to focus on defending your own side or messing with the other player as you can’t really deal with both. With two players on each team there is more flexibility allowing you to do both at the same time.

I enjoyed the overall game of Antonball Deluxe. I give the developers credit for taking three classic arcade games and adding in twists which remind you of their inspiration while also giving you a unique new experience. If you like classic arcade style games and are interested in a twist on the formula, I think you will really enjoy Antonball Deluxe.

Antonball Deluxe does have a couple of issues that keep it from being as good as it could have been though.

First while the controls are usually good, there are occasional times where I wish the controls were a little better. The controls are usually responsive, but there were a couple times where I pushed the jump button and the game didn’t respond as quickly as I would have expected. The biggest issue with the controls is that the collision detection seems to be a little off at times. There were times where it looked like I should have been able to hit the ball but it didn’t register. This is usually not a big problem but it does lead to losing some lives that you don’t feel you should have lost.

The other issue has to deal with the length. I wouldn’t say that Antonball Deluxe is a short game. Like a lot of arcade games though, to maximize your playtime you need to be the type of player that wants to try and increase their high score or don’t mind just playing a few matches even if you have already unlocked everything that the game has to offer. You could probably unlock all of the levels in the game within just a couple of hours. If you are the type of player that just plays through a game and then moves onto something else, you may be a little disappointed by the length. I would have liked more levels as I was really enjoying the game, but it ran out of new content pretty quickly.

Ultimately I enjoyed my time with Antonball Deluxe. The game is basically a modern take on three classic arcade games. Antonball is basically Breakout combined with a platforming mechanic. Punchball is the original Mario Bros. game where you use a ball to stun enemies instead of jumping and hitting the underside of their current platform. Vs. Antonball is basically Pong combined with Antonball. Of the three I enjoyed Punchball the most, but I enjoyed all three games. They are a good example of taking an old arcade game and putting a twist on them to make them feel fresh. The controls/collision detection has some occasional issues, and I wish there were more levels for each game. I still enjoyed Antonball Deluxe though.