Magnum, P.I. is yet another classic TV series that I went into completely blind when receiving the complete series for review purposes. I had never seen a single episode and all I knew about it was that it starred Tom Selleck and his famous ‘stache. Even though I’m years or decades younger than some of these shows, I do like catching up on what I’ve missed throughout the history of television. I have been trying to watch classic series whenever I get a chance to do so, usually through their complete series releases. Some hold up really well and are truly timeless (I thought I Dream of Jeannie was still very funny and Charlie’s Angels was solid), while others may have been great at one point but didn’t really resonate with me in the 21st century. While I wasn’t able to get through as many episodes as I had hoped (it would have taken months to get through 162 episodes), Magnum, P.I. unfortunately seems like it’s going to be the latter for me. It’s watchable but a bit too slow-moving and outdated for my taste.

Magnum, P.I. is about a Vietnam veteran turned private investigator named Thomas Magnum (Tom Selleck). He lives on a luxurious estate at the behest of it’s owner, a famous author who is never seen throughout the entirety of the series. Also living at the estate is British security officer Higgins (John Hillerman), who doesn’t like Magnum very much. Each episode, Magnum must help his clients with whatever they need investigating, which usually puts him in harms way. He generally enlists the help of one or both of his buddies from Vietnam: helicopter pilot T.C. (Roger E. Mosley) and/or Orville “Rick” Wright (Larry Manetti) who is now a club owner. In addition to the present day cases Magnum finds himself involved in, the series also features flashbacks to his war days and how he deals with its scars.

I know a lot of people really like this series and I imagine if I was about 10-20 years older, I probably would have as well. The biggest problem I have is that it just isn’t as action-packed or fast-paced as I thought it would be. I, for some reason, had it in my mind that this would be a quip-a-minute, cheesy action comedy similar to Knight Rider and other ’80s shows like that. Boy was I wrong. Instead, Magnum, P.I. is much more slower-paced than I had anticipated. This is not helped at all by the fact that episodes run 7-9 minutes longer than most network shows of today do (generally 49 minutes per episode). It’s also much more serious than I thought, though there are still flashes of comedy here or there, usually from T.C. or Rick more so than Magnum. The serious procedural drama is one of my least favorite TV genres, but I do usually enjoy comedic ones like Monk or Psych and thought that would be what I would be getting with Magnum, P.I. I have heard that later seasons get cheesier so those episodes may be more up my alley. I also wish the cases were a little more interesting than the ones I’ve seen so far, they have mostly been pretty formulaic at this point in the show’s run.

I also need to talk about the characters a bit. I’ll start off by saying that Magnum and his buddies are genuinely good guys who are just trying to help people out. The series itself also has quite a bit of heart and you can tell it didn’t mean to be any of the things I’m going to be writing about in this paragraph. Magnum is also definitely a “cool” guy (for his time period at least) and I can totally see why people liked watching him on television. However, there is definitely some material (and aspects of these characters) that is a bit hard to watch nowadays. I’m not one to “cancel” a show just for being a product of its time but it is a bit uncomfortable to watch Magnum and his friends do things like spy on two skinny dipping women (in the first episode no less), make advances (occasionally unwarranted ones) on just about every women they meet, or imply that they are interested in a girl as long as they are over the age of 16 (this last one is somewhat of a joke about his clients, who were a group of young girls trying to help their teacher, but it’s still a pretty icky joke). There’s also occasional lingo that is no longer kosher these days (I heard at least one phrase that I’m assuming is a slur towards Asians). This is a problem that plagues a lot of older series and while I can look past them myself, I know that others may not be able to do so. It’s not like Magnum, P.I. is incredibly problematic, it just has the occasional pervy joke or outdated slur and I just feel like I need to point it out for others who may feel offended or creeped out by some of this content.

On the positive side, the cast is pretty solid. It’s of course lead by the handsome and charismatic Tom Selleck and his well-known moustache. The rest of the cast is pretty good as well though none of them stand out as much as Selleck of course. Of the supporting actors, I personally like Roger E. Mosley (as T.C.) the most, mainly because he provides a large majority of the humor that this series sorely needed more of. I will note that all of the main leads have good chemistry with one another, most notably Selleck and Hillerman, whose rivalry is also amongst the highlights of the show.

Magnum, P.I. also has a lot of interesting cinematography from a TV production this old. It features a lot of car and helicopter scenes/chases, which were often shot in semi-unique ways. The series took place in and was actually shot in Hawaii and it shows. It’s often beautiful to look at, from the luxurious premises Magnum calls home to the beaches and helicopter scenes. If only the episodes and cases were a bit more interesting, Magnum, P.I. would have all the hallmarks of a truly great show. Hopefully those two things improve as the series goes on.

I’ve reviewed quite a few of Mill Creek Entertainment’s complete series Blu-ray releases at this point and I usually mention that they are budget releases that focus more on price point than video quality. The video quality on Mill Creek’s releases is generally solid enough for me, but I can usually see flaws that will be annoying or even flat out unacceptable to video quality connoisseurs. Magnum, P.I.: The Complete Series is similar but in my opinion, slightly better in video quality than the typical Mill Creek offering. I mostly focus on clarity of image and that’s rather good on this release, especially for something shot in the ’80s. The picture quality isn’t perfect but it’s definitely acceptable or even good for its’ age. 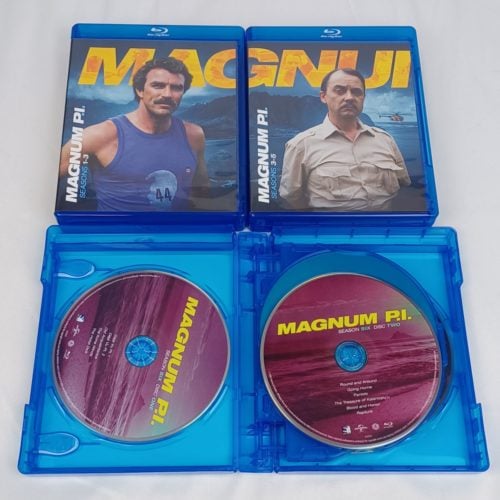 The packaging for Magnum, P.I.: The Complete Series.

Mill Creek’s complete series Blu-ray packaging is usually solid (especially compared to their DVD set packaging) but in this case, it’s flat out good. The thirty Blu-ray discs are housed in three large Blu-ray cases (which each hold ten discs each, all of which get their own spindle) which together fit into a pretty sturdy box. The only (very minor) problem I have is that it is hard to get one of the Blu-ray cases out without removing at least one other one (they are really tightly packed into the box which is good for storage but not so good for getting out a disc). This set includes several bonus features including new interviews with the composer, writers, directors, and producers, two episodes of The Rockford Files (which Tom Selleck guest starred on), “flashback featurettes,” and a few audio commentaries. Mill Creek releases rarely come with bonus features and this one even features a few new ones to boot.

I can totally see why Magnum, P.I. was popular during its run (and even now). It’s got a handsome and charismatic lead, a sexy location, fancy cars and properties, and a pretty solid cast. However, it hasn’t exactly aged the best. It’s much slower-paced than I had hoped (and way too methodical for much of today’s audience) and not nearly as fun as I had anticipated. I found the show to be watchable but it’s not going to be a series I have to watch every episode of unless things drastically improve. As for the complete series release, it’s quite a bit more expensive than most Mill Creek releases but more work was also put into it as well. The video quality is generally better than most of their complete series Blu-ray releases and a decent supply of bonus features made the cut as well. Magnum, P.I.: The Complete Series is watchable (2 out of 4) for most but recommended (3 out of 4) for fans of the series.