Ever since I watched WandaVision, I’ve been on a comedy kick and in particular have been interested in checking out some classic sitcoms from the past. Luckily, Mill Creek Entertainment recently released I Dream of Jeannie: The Complete Series on Blu-ray and I was given a chance to check it out and review it. I had no idea how much I would like a sitcom twenty years older than I am but I’ve always laughed at the random bits and pieces I’ve seen of classic sitcoms like I Love Lucy and The Andy Griffith Show. I Dream of Jeannie was completely new to me but even though it has twenty years on me, I was still very entertained with almost all of the episodes I watched.

I Dream of Jeannie features Larry Hagman as astronaut Tony Nelson. On one of his test flights something goes wrong and he is stranded on a deserted island in the South Pacific. NASA has no idea where he is but luckily there’s a mysterious bottle on the beach inhabited by an actual female genie (played by Barbara Eden), who Tony eventually gives the extremely creative name Jeannie. She helps Tony get rescued and he frees her from her servitude. However, Jeannie immediately falls in love with her “master” and decides to tag along on his flight back home. Most episodes revolve around Jeannie trying to help Tony with some sort of problem (even though he usually doesn’t want any help) but often putting him into crazy situations that he has to talk himself out of (usually to NASA’s psychiatrist Dr. Bellows). As the series goes on, Dr. Bellows (Hayden Rorke) begins to get more and more suspicious of Tony and attempts to prove his suspicions by catching him in the act. Rounding out the cast is Tony’s fellow astronaut and buddy Roger Healey (Bill Daily).

While I thought there was a good chance I would at least enjoy I Dream of Jeannie, I was shocked by how much the comedy still holds up. This is still a very funny show that I found myself laughing out loud at multiple times in most episodes. Even the less funny episodes are generally good for quite a few chuckles. There’s definitely some cringe comedy involved, which I’m usually not a fan of, but it works surprisingly well here with Tony making a fool out of himself thanks to Jeannie’s constant meddling. There’s also a lot of sillier humor which is more in line with my comedic taste. A lot of the jokes are pretty obvious (even for someone who didn’t grow up during the time like me) but they still made me laugh anyway.

One of the best parts of I Dream of Jeannie is the wonderful cast. Barbara Eden is adorable and a lot of fun to watch, especially when she’s playfully messing with Tony or the other characters (she always has a huge smile on her face and laughs along with the audience which I found very endearing). Larry Hagman is great as well and the two leads have amazing chemistry. In addition, the cast also has two outstanding supporting characters in Roger and Dr. Bellows. Roger is the typical dopey best friend character but Bill Daily gets as much out of the character as he can. I like Hayden Rorke as Dr. Bellows even more. He’s not really a “villain” per se but he’s an amusing thorn in Tony and Jeannie’s side. The character is just flat out funny nearly every episode thanks to his constant disdain for whatever shenanigans Jeannie’s gotten Tony into that day. Rorke is so good in this role and he often steals the scenes completely from the two extremely gifted leads.

Another thing I liked about I Dream of Jeannie is that it is semi-serialized in a few different ways. Even in the first season there are storylines that actually continue on instead of being forgotten or ignored. As mentioned earlier, Dr. Bellows is on the warpath trying to find proof of Tony’s strange behavior, Roger is involved in a plot twist in the middle of season one that gets him more involved in future episodes, and even Tony’s work with NASA is a bit serialized as they prepare to go into space. Of course it’s not like today’s comedies where many of them are nearly as serialized as dramas but for 1965, the serialization is honestly pretty impressive. While I haven’t gotten to most of them, there are even some multi-episode stories in the latter seasons as well.

Honestly, I don’t have a lot of negatives with I Dream of Jeannie, it’s still a very funny show that is well worth watching. The biggest fault the show has is that it can be quite predictable as most old TV shows were. I almost always predicted exactly what Jeannie was going to do in each episode just based on the first few minutes and a lot of the jokes are pretty obvious too. However, the show is still funny anyway so this really isn’t that big of a deal. As usual with these complete series reviews, I wasn’t able to get as far through it as I would have liked so I can’t say whether it holds up in the later seasons but I have heard that the last few seasons are not as good as the early ones. I do have a feeling that this series could get old quickly due to its concept but I’ve yet to hit any bad stretches. The only other negative isn’t even really the show’s fault as things were different back in the ’60s. That problem is that the show can occasionally get pretty non-PC at times. It doesn’t help that they cast a white woman as a genie from the Middle East, even if she was clearly a good choice from an acting and comedy standpoint. As good as Barbara Eden is, this casting decision sometimes leads to moments that feel slightly (or even more than slightly) racist. The show also uses stereotypes of Asians, Latinos, and other groups as well which are sometimes a bit uncomfortable to watch (nothing horrible so far, just some scenes that made me feel a bit uncomfortable). Thankfully one other potentially problematic aspect of the show (Jeannie serving her “master”) isn’t as bad as it could have been because Tony thankfully treats her quite well and rarely asks Jeannie to do much of anything for him (she usually just does it for him anyway, often putting him in weird situations). Thankfully, I can usually see these things as a product of their times and ignore them quite easily but I know others may find these things more difficult to watch. 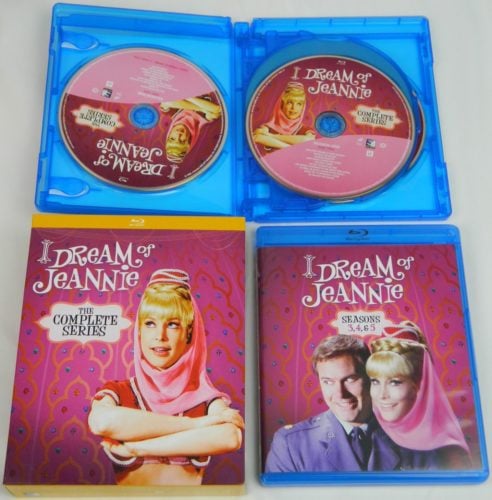 The packaging for I Dream of Jeannie: The Complete Series.

I’m not the best at noticing the little things that make certain Blu-ray releases pop but thankfully this time I had a few DVD seasons in my collection to compare this release to. I certainly noticed a difference between the two and can safely say that this is a solid improvement in video quality over the DVD releases. The picture is quite clear and crisp on most episodes but at over 50 years old, this was never going to be a release that looked absolutely amazing on the format. It’s certainly a good enough improvement but not something that you absolutely have to watch on Blu-ray if you aren’t a stickler for video quality. The first season is presented in black and white, not the colorized versions that some people like and others despise. The packaging is pretty basic (two large Blu-ray cases housed in a relatively thin cardboard box) but much better than the cardboard sleeves Mill Creek uses for most of their DVD complete series releases. There is only one extra included in this release, I Dream of Jeannie: 15 Years Later (one of the show’s TV movies made as you guessed, fifteen years later).

If you’ve been a longtime reader of Geeky Hobbies, you probably know that I’m notorious for giving out a lot of 3/5’s, especially for individual TV episodes. I give out very few 1’s and even less 5’s as I feel like almost everything is at least worth a watch for some audiences (which means most things fit into the 2.5-3.5 range). I expected to give out a lot of 3 out of 5’s to I Dream of Jeannie episodes but my average score was more in the 3.5, almost 4/5 range. I have enjoyed my time with I Dream of Jeannie far more than I expected to. The reason this review is so late is because I kept wanting to watch more episodes before reviewing it, that’s the mark of a good show. I Dream of Jeannie is still very funny even in the 2020’s, with some great characters and performances from the entire cast. It may be a bit predictable at times but the comedy and performances more than make up for it. Is it worth upgrading if you already own the series on DVD? That probably depends on how much you value video quality. I personally think there is a rather large upgrade in video quality on this release but I am far from an expert in this area. Highly recommended for those who don’t already own the series, recommended for those who do but want a moderate upgrade in video quality.

I Dream of Jeannie: The Complete Series was released on Blu-ray on November 30, 2021.

Buy I Dream of Jeannie: The Complete Series on Amazon: Blu-ray

[…] usually through their complete series releases. Some hold up really well and are truly timeless (I thought I Dream of Jeannie was still very funny and Charlie’s Angels was solid), while others may have been great at one […]