Madcap Marathon may be a game that few people have ever heard of before but it is a game that I fondly remember playing as a kid. I don’t know if it was the game’s simplicity or the fact that I have always liked these type of dexterity/action games. While I remember having a lot of fun with Madcap Marathon I worried that it was going to be like so many other games that I remember from my childhood. Unfortunately the games you enjoyed as a child rarely live up to your memories of them. I was hoping that Madcap Marathon was going to avoid this fate as it at least has an interesting concept. Madcap Marathon is far from a deep game but it does a good job creating an entertaining collection of mini games.

How to Play Madcap Marathon 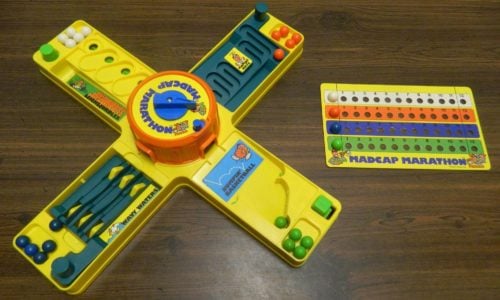 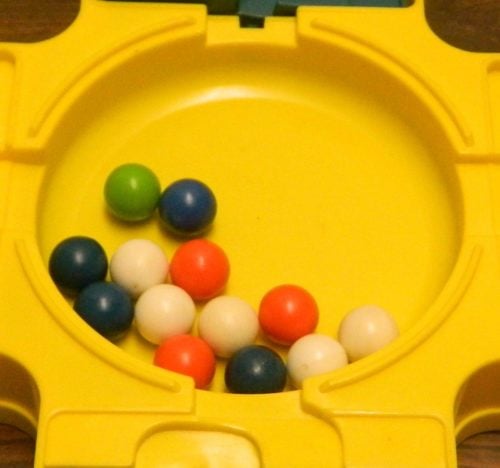 In this round the players got the following number of marbles into the center of the board: white-5, blue-4, orange-3, and green-1. The players will move their marble on the scoreboard the corresponding number of spaces.

After everyone has recorded their score for the round, they pick up their marbles and the gameboard is turned so each player can play the next game. The timer is reset and another round is played. 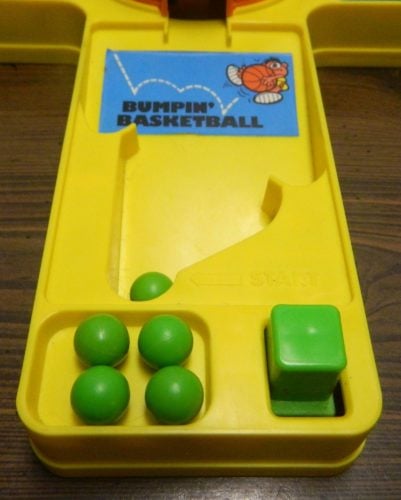 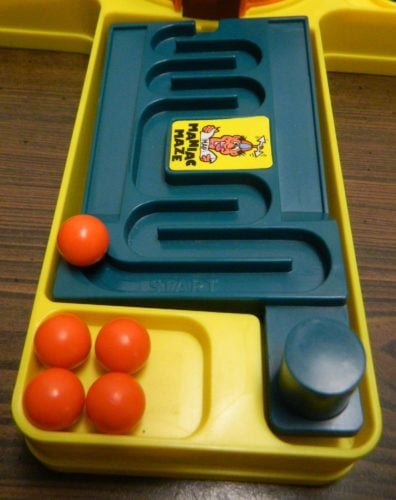 Maniac Maze: In Maniac Maze the marbles start at the beginning of the maze and the players have to navigate it to the end of the track. Player can press on the lever to tilt the maze right or let go of it to have it lean to the left. By tilting the maze back and forth you can navigate the marble through the maze. 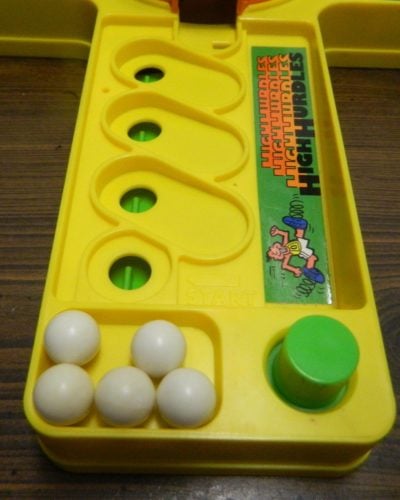 High Hurdles: In High Hurdles the player is trying to bounce their marbles from one launcher to the next until they reach the end. To launch the marbles the player has to press down on the button. 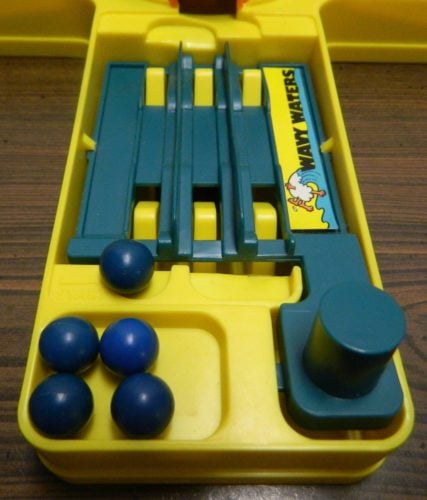 The game ends after all of the players have been able to play all of the games. The player who scores the most points wins the game. 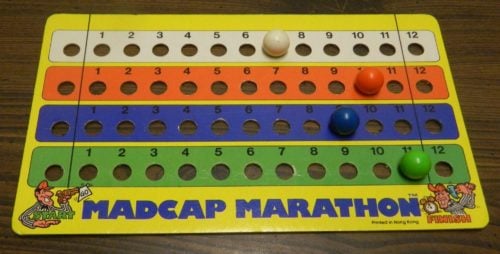 The green player scored the most points in the game so they have won the game.

My Thoughts on Madcap Marathon

Lets begin with High Hurdles. In High Hurdles you press the button to launch the marble into the air and hopefully to the next launcher. High Hurdles is basically a test of being able to press the button with the right amount of pressure. If you don’t apply enough pressure the marble is not going to make it to the next hurdle. If you apply too much pressure though the marble could fly anywhere and you might be forced to start again from the beginning. In general I would say that High Hurdles is pretty easy as you should be able to get at least a couple marbles into the center before time runs out. Once you get a rhythm on how much pressure to apply, you can get marbles into the center of the board pretty quickly.

Maniac Maze is a game of applying the right touch at the right time. You basically have to press down and let go of the lever in order to tilt the maze back and forth. The direction you tilt the maze determines the direction that the marble will move in. You can’t go too fast or the marbles will fall off the sides of the maze. You can’t go too slow either or you won’t have enough momentum to get the marble to the next section of the maze. Basically the key to the game is to get the right rhythm down. Once you get into a rhythm on when and how much to tilt the maze, you can quickly get the marbles through the maze. This is one of those games where if you get in a rhythm it is easy to get all of the marbles into the center. If you can never get a rhythm though you will likely only get one or two marbles through the maze.

Like Maniac Maze, Wavy Waters is a game where you need to get into a rhythm. Basically the key to Way Waters is momentum. In the game you have to lift up and drop the track in order to get the marbles through the obstacles. This is done by having the marble gain some momentum rolling down the track and then at the last minute pressing/letting go of the lever to get the marble to roll over the obstacles. You need to keep the marble rolling long enough to build up momentum but you can’t wait too long or the obstacles will stop it. Like Maniac Maze rhythm is key to the game. When you get into the right rhythm you will quickly breeze through the track but things can come to a screeching halt when an obstacle blocks your path. If you are in a good rhythm you can easily get all of the marbles into the center but if you struggle you could only get one or two.

By far the hardest game in Madcap Marathon is Bumpin’ Basketball. We played Madcap Marathon a couple times and I think all of the players combined could only manage to get one of the marbles into the center of the gameboard. I think it is the most challenging game for a couple reason. First you basically have to have three close to perfect shots to make it to the center as one wrong shot will likely set you back to the beginning. Second it might just be because of age but the launchers just don’t seem to work that well. I personally didn’t have that much trouble getting marbles to the top launcher but getting them into the center was much harder. It is hard to even get a shot that makes it to the center. Finally the blockers on the timer affect this game the most. In the other games you can get the marbles to the end and then just let them sit there until the center opens again. This isn’t the case for Bumpin’ Basketball so you need to time it perfectly. While Bumpin’ Basketball is fun, it could have been made easier as you will rarely score any points from it.

The games in Madcap Marathon can differ pretty significantly in difficulty but I would say that they are all quite fun. None of the games are particular deep as you can explain how to play each one within a minute. There is just something compelling about them though. Between a combination of the timer and the simplicity of the games, it is surprisingly fun trying to get as many marbles as you can into the center of the gameboard in time. People who don’t really care for these type of action/dexterity games probably won’t really care for Madcap Marathon. People who like these types of games though will likely enjoy their time with Madcap Marathon.

Each game of Madcap Marathon has each player play all four games but it surprisingly doesn’t take that long to play. Each round of the game seems to only last around a minute. This means that outside of taking a decent amount of time between rounds, most games of Madcap Marathon will only last around five minutes. You will usually want to play the game a couple times before putting it away but I really think each game of Madcap Marathon could have been a little longer. I think the rounds should have been twice as long and gave players twice as many marbles. The longer length would have kept the intensity while also allowing players to have more time to make up for bad luck. With the rounds being so short you usually have to move onto the next game before you can even start to form a rhythm with your current game.

I think the biggest reason for Madcap Marathon being so short is the fact that there are only four games. I am guessing the main reason that the game stuck with only four games was due to the cost. More games would have made manufacturing more expensive and thus raised the price of the game. It is a shame that more games couldn’t have been included though. The idea of a board game made up of a bunch of mini games is actually a really good idea. With the mini games being quite enjoyable as well, I would have liked to see what else the designers could have come up with.

The main reason I wish Madcap Marathon had included more games is the fact that it is one of those games that while fun is not something that you will want to play for hours at a time. I could easily see playing the game three or four times in one sitting but at that point you are going to be a little sick of the game. With there only being four games to play, they get a little repetitive after a while. With each game only taking around five minutes, this means that you will only want to play the game for like 15-20 minutes until you will want to put it away for another day.

On the component front I would say that Madcap Marathon is actually pretty good. I will say that I am kind of surprised that the game is from 1981 as it looks like more of a game that would have been released in the 1960s or 1970s. For the most part the components work pretty well. For a game that is 37 years old it still works surprisingly well. This is probably due to the game mostly relying on simple mechanical components that will only gradually wear out over time. With my copy of the game marbles would occasionally get stuck but otherwise the game worked really well. As long as the game was taken care of, I would think the components would work well for a long time.

Should You Buy Madcap Marathon?

Madcap Marathon is not a fantastic game but I was actually surprised that the game held up a lot better than I was expecting. Madcap Marathon is basically a collection of mini games but that concept works surprisingly well. The mini games are really simple where you can explain them within a minute. They might not be really deep but they are surprisingly fun. There is something compelling about trying to complete the basic tasks as many times as you can before the timer runs out. Madcap Marathon is a really short game though as each game only takes around a minute and there are only four total games. While it would have added to the cost, Madcap Marathon would have benefited from having more games. You are likely only going to want to play the game three or four times, which will only last around 15-20 minutes, before you are going to want to put the game away for another day.

If you are the type of person that generally does not like action/dexterity games or don’t really care for the game’s concept, you are unlikely to like Madcap Marathon. If you like the game’s concept and don’t mind that it is a game that you will only play for a short amount of time every so often, I think you will enjoy Madcap Marathon. For this reason though I would probably only recommend the game if you can get it for a good price.

If you would like to purchase Madcap Marathon you can find it online: Amazon 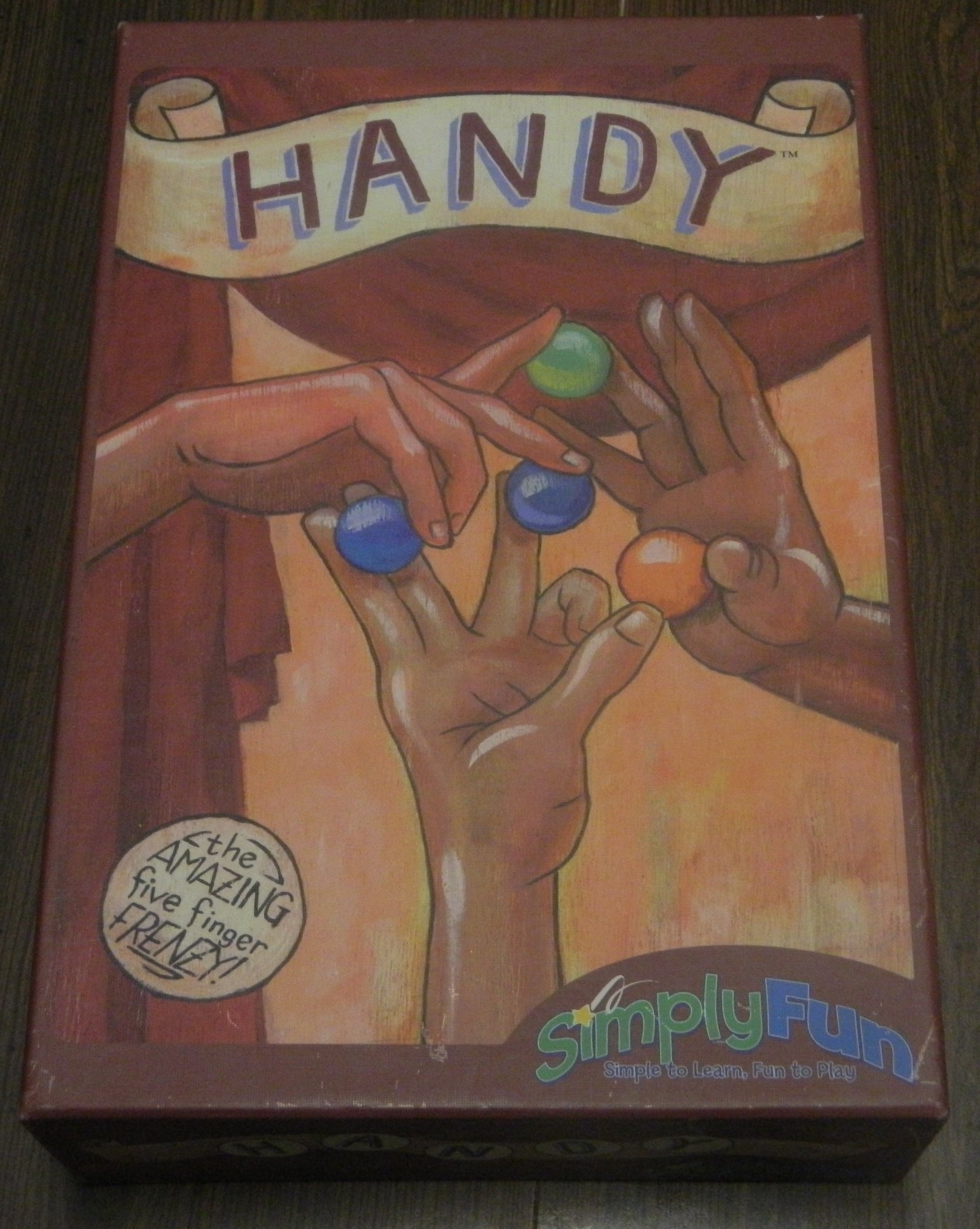