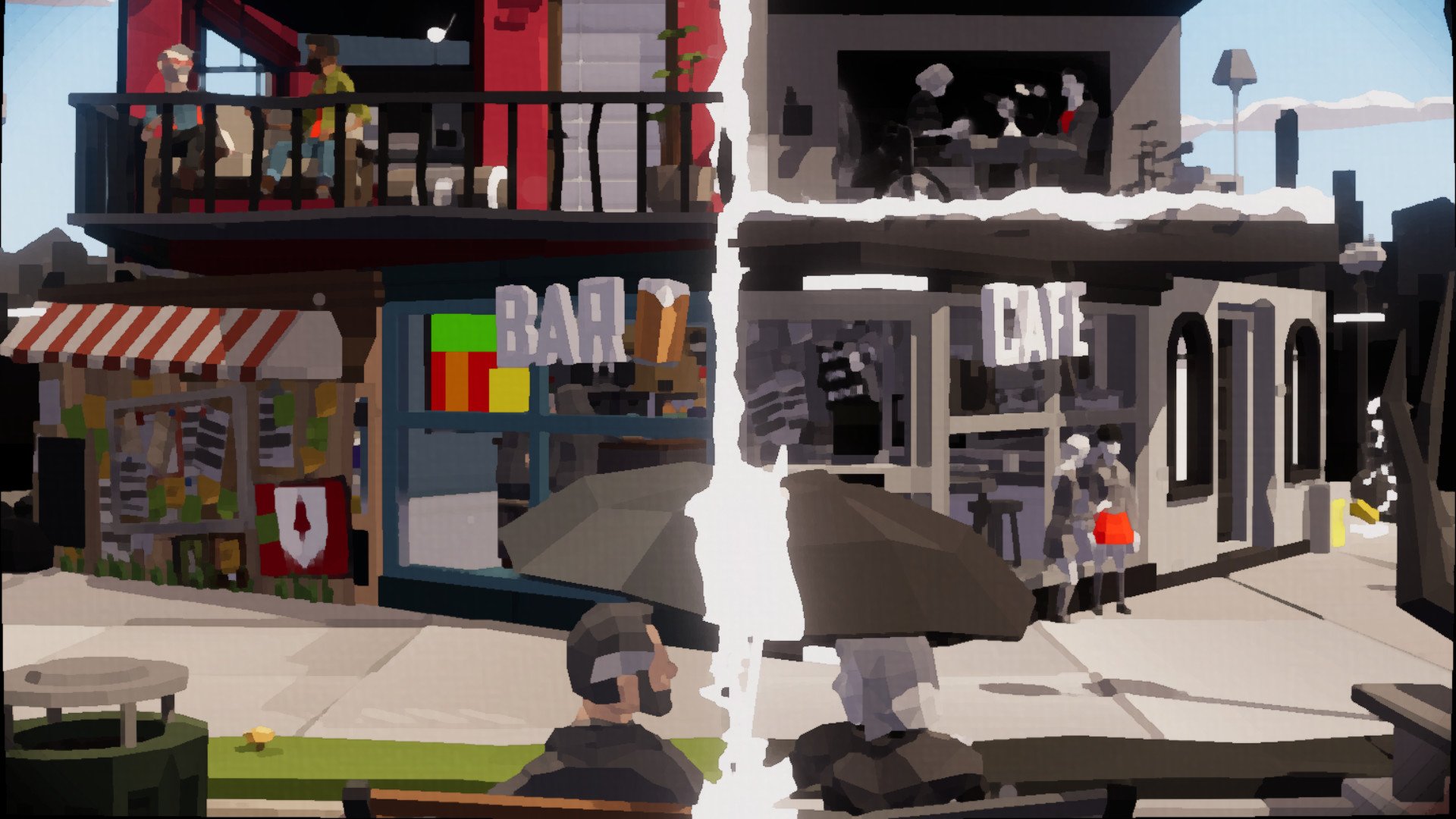 Anyone familiar with Geeky Hobbies will know that I am a huge fan of the puzzle genre. It honestly may be my favorite genre of video game at this point. It is hard to beat a good puzzle game that is clever and gives you a great feeling when you beat it. On top of being a big fan of puzzle games, I have also always appreciated a game that actually tries to do something unique. Because of these two reasons I was intrigued when I first saw Love – A Puzzle Box Filled With Stories as it combined a puzzle game with an interesting time manipulation puzzle box mechanic. The game originally released on PC back in October of 2020, but the Nintendo Switch port of the game released today giving me a good reason to check out the game. Love – A Puzzle Box Filled With Stories is a short but sweet little puzzle game with some interesting new ideas for the genre.

Love – A Puzzle Box Filled With Stories is a story of an apartment building and the relationships of the residents. The gameplay is built around a time manipulation mechanic. The building has four sides with two sides being in the past and two in the present at all times. You as the player can rotate each floor individually in order to switch sections of the floor from the past to the present. This is where the main puzzle element in the game comes from. For each group of residents you are given a set of photos. Some of these photos are labeled present and some the past. The goal of the game is to fill in the missing pictures to figure out what happened in the lives of the residents.

The gameplay is pretty straightforward. Two buttons are dedicated to rotating the current floor left or right switching it from the past to the present. You will look around the building with one of the analog sticks and the game also includes a zoom button. Finally you have a button that interacts with the part of the screen that your cursor is currently hovering over. Basically the game’s puzzles are built around interacting with the characters and changing the environment around them to unlock new memories from the characters’ past and present. As you unlock new memories the layout of various rooms will change which will open up new puzzles to solve. The objective is to find all of the pictures for each of the residents to unlock their full story.

When I first saw Love – A Puzzle Box Filled With Stories two things initially intrigued me. First as a sucker for puzzle games, I try to check out as many games from the genre as I can. The other thing was just the whole idea behind the game. I have played a lot of different puzzle games and I honestly can’t recall one with a puzzle mechanic quite like Love – A Puzzle Box Filled With Stories. The idea of a whole game being built around an apartment building puzzle box is a really clever idea. As a fan of time manipulation mechanics as well, I was really interested in seeing how the game would create puzzles around rotating sections of the apartment complex from the past to the present.

I don’t see Love – A Puzzle Box Filled With Stories being for everyone, but I enjoyed my time with the game. I wouldn’t call the game a particularly taxing experience as there really aren’t any brain burner puzzles. The game isn’t meant to be though. Instead it feels more like a laid back puzzle game that you can just enjoy while taking in the various stories and overall atmosphere. I thought the game did a really good job at creating an engaging atmosphere. The game uses more of a low polygon graphical style which I think works well for the game. The game’s music is quite good as well.

Instead of being focused on really difficult puzzles, the game spends more time on the little stories told throughout the game. The stories of the residents differ quite a bit from tales of loss, love, and regret. The story features no dialog and is instead told through the snapshots and small little scenes of the characters interacting. What you get out of the story is likely going to depend on your own personal experiences. Some stories will probably hit close to home for some people. While the stories have to be kind of simple as most are told through ten or so snapshots, if you pay attention to what is going on some of them can be quite emotional. Fans of these type of games will likely really appreciate this aspect of the game.

As for the actual gameplay, I enjoyed it for the most part. I wouldn’t really say that the game feels like your typical puzzle game. In a way the game kind of feels like a hidden object game mixed with a puzzle game. A lot of the gameplay revolves around looking through the various rooms to find residents and objects that you can interact with. Some of the puzzles only involve finding the right things to interact with. Others require you to set up several floors in the right way in order to have one floor impact what is going on in another room. Some of the puzzle design can be quite clever as you need to think outside of the box. I thought the time manipulation elements were well done as you have to switch between altering the past and present worlds of the characters in order to reveal their full story. If the game’s concept intrigues you, I think you will enjoy Love – A Puzzle Box Filled With Stories’ gameplay.

While I enjoyed Love – A Puzzle Box Filled With Stories, there were two issues with the game that prevent it from being quite as good as I think it could have been.

The first has to deal with knowing what objects you can interact with and which you can’t. In general I wouldn’t say that the game is a particularly difficult puzzle game. Once you know what you can interact with and what the final objective is, it is usually pretty easy to figure out what you are supposed to do. Really the only times that I got stuck in the game were when I didn’t know what objects I could interact with or I didn’t see something that opened up in one of the rooms. To proceed in the game you need to keep a watchful eye on what is going on. Some of the clues that the game gives you are kind of subtle where you need to really pay attention to your surroundings. If you don’t see one of these clues, the game can become kind of frustrating.

The main issue with Love – A Puzzle Box Filled With Stories though is just the game’s overall length. The length will somewhat depend on how long it takes you to solve the puzzles, but unless you get totally stumped don’t expect the game to take too long. I can’t remember exactly how many residents’ stories you will play through, but they are usually pretty short especially if you quickly figure out what you are supposed to do. It may vary some, but I would guess that most players can beat the entire game within two or so hours. That is pretty short and disappointing as I would have liked to see what else the designers could come up with for the mechanics. I enjoyed my time with the game, but I wish there was more of it.

Love – A Puzzle Box Filled With Stories is an interesting little game. As a fan of puzzle games I found the time manipulation puzzle box0 mechanic to be pretty interesting. The game’s puzzles are built around exploring the lives of the residents of an apartment building. This is done through using snapshots from their lives to rotate the apartment building between the past and present to reveal what happened to get the residents to their position in the present day. The puzzles can be kind of easy with most of the challenge coming from figuring out what objects you can interact with. Despite this I thought the puzzles were clever and fun. On top of this I thought the game’s overall atmosphere and little mini stories were well done. The biggest problem with Love – A Puzzle Box Filled With Stories is just that it is quite short as it will take most players only around two hours to complete.

My recommendation for Love – A Puzzle Box Filled With Stories comes down to your thoughts on the premise, puzzle games in general, and the game’s short length. If you don’t generally care for puzzle games or aren’t particularly interested in the premise, I probably wouldn’t recommend the game. If the short length concerns you, I would maybe wait for a sale. For fans of the genre though I think you will really enjoy Love – A Puzzle Box Filled With Stories and should consider picking it up.