How to Play Logo Party

Place the gameboard in the center of the table. The players divide into two teams. Each team selects a playing piece and places it on the start space. Shuffle the two types of cards separately and place them in the card box. Place the card box, timer, paper and a writing utensil next to the gameboard. Choose which team will start the game.

Do It!: The card reader has to act out the brand. The player can’t talk or make any noises to describe the product. 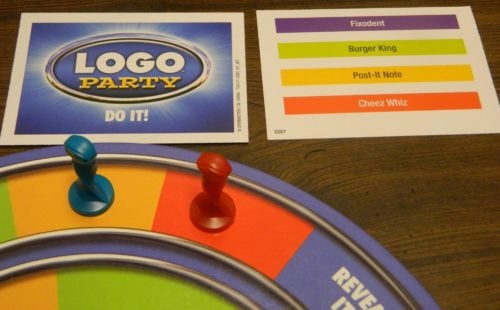 For this round the red player is going to have to act out Cheez Whiz without making any sounds.

Draw It!: The card reader will draw clues about the brand. The player can’t use letters, words or numbers in their drawings. 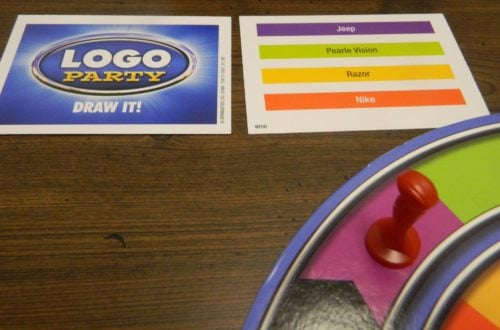 In this round the red player is going to have to draw something that gets their team to guess Jeep without using any letters or numbers.

Describe It!: The card reader will describe the two words on the card one at a time. The player cannot say the brand name or any portion of the name. They also can’t use clues like “sounds like” or “rhymes with”. The players only get credit for completing the challenge if they get both brands in time. 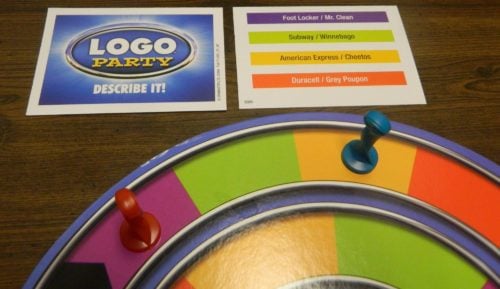 For this round the blue team has to try and describe American Express and Cheetos.

When a team’s playing piece lands on a “Reveal It!” space the card reader will choose one of the reveal it cards. They will insert the card into the timer so the image of the logo is placed against the blue side of the timer inside the slots. The timer is then started and will slowly start to reveal the logo. All of the players except for the card reader can try to guess what the logo is. The first team to shout out the correct answer wins and gets to move their piece forward one space and play another card. If neither team guesses the logo, play passes to the other team with neither team earning an extra space. If both teams guess the logo at the same time another reveal card is played to break the tie. 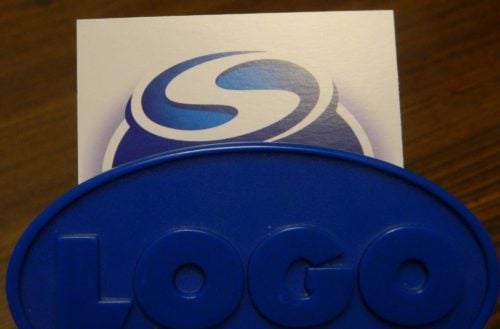 This logo is slowly being revealed. The first team to answer Spin Master will win the round.

When one of the teams reach the Logo Party space the end game begins. On their turn they will play a Reveal It! round. If the other team guesses the logo first they move their piece forward one space and the game continues as normal. The team on the final space will try again on their next turn. If the team on the final space guesses the logo first, they win the game. 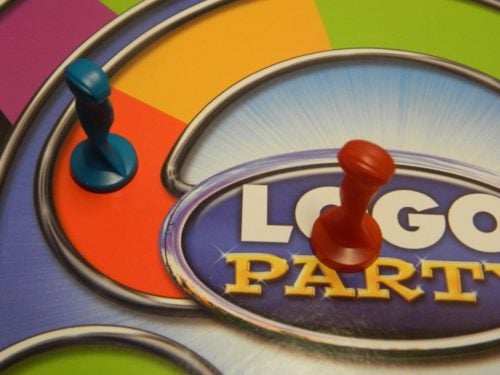 The red team is on the final space. If they are able to win a Reveal It! round they will win the game.

My Thoughts on Logo Party

I have played a lot of board games and I have encountered some strange themes from time to time. While I wouldn’t consider it to be strange theme, I have never really understood why people thought it was a good idea to build a board game around advertising. We see enough advertising all day that I don’t know why people would want to play a board game about advertising. Despite the concept not making a lot of sense The Logo Board Game is somehow not the only board game that is based around advertising. Before The Logo Board Game there was Adverteasing which was first created back in 1988. Adverteasing was another advertising themed trivia game.

If I didn’t already make it pretty clear, I can’t say that I was a big fan of the theme behind the Logo Party game. While a theme can improve a game, it does not make the game. Therefore I went into Logo Party disregarding the fact that I think the theme of a board game being based on corporate brands is a terrible idea. When you get past that fact Logo Party still ends up being a pretty basic party game.

Outside of the advertising theme, Logo Party is not a particularly original game. Basically the game includes the greatest hits of party games. First you have Do It! which is basically charades. You act out the brand without making any sounds. Draw It! is Pictionary except that you are drawing things associated with brands instead of normal items. Finally you have Describe It! which is a Pyramid type game. Basically you have to give clues about the brand without using the brand’s name.

As most people have played a game that have had these three mechanics before I am not going to really spend a lot of time talking about them. There is nothing really wrong with them but they don’t really do anything that you haven’t seen done in other party games. If you like these type of games you will probably like these rounds and vice versa.

I do want to point out that these rounds are a lot harder than you would expect. You probably never really thought about it but it is actually not as easy as you would expect to act out or draw a brand without being able to mention the brand at all. This isn’t helped by the fact that the timer included with the game is way too short. The timer gives you 20 seconds for each round. Good luck drawing a half way decent picture or doing a good job acting out a brand in just 20 seconds. The Describe It! round wouldn’t be that difficult except that the game makes you get two brands in the 20 seconds. Good luck getting your teammates to guess a brand in less than 10 seconds.

The time limit really hurts the game as it makes it hard to actually successfully finish a round. This means that for most of the game both teams will just move forward the one space at the beginning of their turn and then not complete the round in time. This is not that interesting or entertaining. Basically the game comes down to which team is able to guess a couple more of the brands than the other team as both teams slowly move towards the finish line.

Before playing the game I thought the most difficult part of the game was going to be the brands themselves. I thought the game was going to include quite a few brands that I had never heard of before. For the most part I would say Logo Party does a pretty good job picking brands that most of the players should be familiar with. Most of the brands that you don’t know have names that are easy enough to give other clues for that your teammates could still guess the brand. I will say that I thought the game had a little too many clothing brands though. There are also a decent amount of brands that are pretty hard to distinguish from their competitors without using the actual name which makes them hard to give clues for.

There are some problems with the Reveal It! mechanic though. First for quite a few of the logos it takes too long for any of the logo to be visible. It is kind of boring sitting around waiting for more white background to be revealed. On some of the cards I think they could have enlarged the logo so it filled more of the card. Second the Reveal It! round is pretty easy because a lot of the logos that were chosen actually have the brand name as part of the logo. It is not that challenging to just read what is printed on the card. The biggest problem is that the Reveal It! cards just aren’t used that much in the game. Of the 21 spaces only four of them are Reveal It! spaces so you likely will only have around seven Reveal It! rounds in the entire game.

As far as the components I can’t say that I love them. While a lot of the components are what you would expect I have to talk about the timer. As I already mentioned the timer is way too short. While I like how the timer works in the Reveal It! rounds, there really is nothing else to like about it. The timer is cheaply made which makes it surprisingly hard to set. The timer also makes an extremely annoying sound while it runs. Outside of the Reveal It! rounds I would recommend using another timer to save your sanity.

Before wrapping up I want to quickly talk about the “Logo” series of board games. The series began in 2008 with the original Logo Board Game. While I have never played it, the game seems like a typical trivia game that is based around advertising. This eventually lead to the Logo Board Game MiniGame which is basically a travel version of the original game. Then in 2012 Logo: What Am I? was created which is basically the Do, Draw, and Describe rounds from this game. Finally in 2013 The Logo Party game was revealed. While I haven’t played the other games in the series I have to say that Logo Party is probably the best game in the series even if it is only a very average party game. It still surprises me though that so many board games were created that utilize an advertising theme.

Should You Buy Logo Party?

I like to describe Logo Party as “Consumerism the Game”. Basically the game is a trivia board game based on your knowledge of different brands. The game basically takes Pictionary, Charades, and a game like Pyramid and combines them with brand names. While these mechanics are not terrible they don’t really do anything original either. The best mechanic in the game is the Reveal It! rounds which are pretty fun but are too easy and don’t come up in the game nearly enough. Add in the annoying/terrible timer and Logo Party has some issues. It is not a terrible party game but you really need to love the idea of a trivia game about brands to really appreciate it.

If you don’t really care for party games or brands in general, I don’t think Logo Party is going to be for you. If you like the idea of testing your brand knowledge and don’t mind a pretty generic party game, you might get some enjoyment out of Logo Party. I would recommend waiting until you can get a good deal on the game though.

If you would like to purchase Logo Party you can find it online: Amazon