Skip to Content
I like party games and I even tend to enjoy trivia games more than your average gamer. However, Battle of the Sexes: IQ Test (a mix of party and trivia game) is absolutely awful in almost every way. From a lack of questions and humor in this supposedly “humorous” game to some of the worst mechanics I have ever seen, this game is flat out terrible.
How to Play | My Thoughts | Should You Buy? | Comments

How to Play Battle of the Sexes: IQ Test

First, decide whether to play as individuals or teams (if there are more than four players the game recommends team play). Each player or team than takes two tokens (blue ones for men and red ones for women) and places one of them on a starting position on their gender’s side of the board. The other token is kept away from the board until either the first token has made it to the end of the board or is taken “prisoner” by an opposing player or team. Included with the game are five different deck of cards (female cards, male cards, genius cards, female wild cards, and male wild cards). Sort all cards by type then shuffle the female wild card and male wild card decks (separately) and place them on their corresponding spaces. Finally, add an even amount of genius cards to both the female card and male card decks, shuffle both decks, and place them on their corresponding spaces. You should have four different decks after all the sorting and shuffling is done (male cards, female cards, male wild cards, and female wild cards).

Battle of the Sexes: IQ Test is more or less a typical trivia game except for a few twists. After you have determined turn order, an opposing player asks the current player a question from the opposite card deck (if the current player is female, they will be asked a question from the male card deck or vice versa). The reader of the question can pick any of the three questions to ask them (unless it is a genius card in which case there is only one question on the card). If the player answers correctly, they get to move their token forward a space and the reader asks them one of the other two questions on the card (and if they get the second question right, they get another space and the final question is asked for a potential third space). If they incorrectly answer a question, they don’t get to move forward a space and their turn is over. They do, however, keep any forward movement from previous questions they got right. After a player answers incorrectly or all three questions are answered (players can only move a maximum of three spaces on their turn unless they draw a genius card), play moves to the next player and they are also asked questions from the opposite gender deck. Play continues in the exact same manner until a player or team has moved both of their tokens across the entire board to the other gender’s starting spaces. The first player or team to do so wins the game. 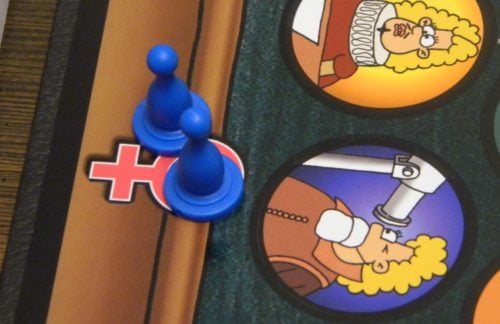 This player has gotten both of their tokens to the other side of the board and has won the game.

However, there are a few twists to the game. First of all, there are genius cards shuffled into both gender card decks. If a genius card is drawn, there is only one question to be answered and if the current player answers correctly they get to move two spaces instead of just one (since these questions are more difficult). They also get to take another turn. If they are incorrect, their turn ends without any movement and they don’t get to take another turn. 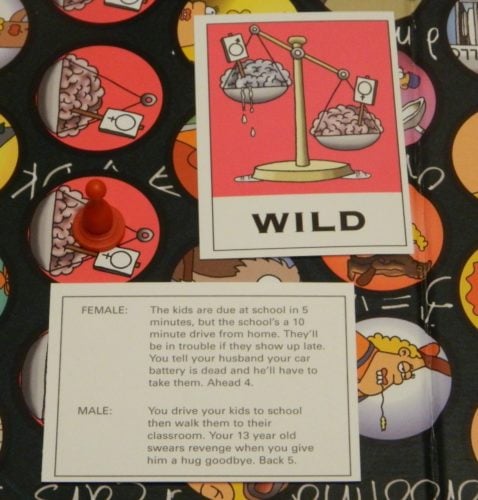 This female player has landed on a wild card. Since they are on the female side of the board they draw a pink wild card and move the corresponding amount of spaces.

The second twist is the addition of wild card spaces on both sides of the board. Whenever a player or team lands on their gender’s wild card space, they have the option of picking up a card and following the directions for their gender (they all help you so I have no idea why you wouldn’t take the card). After they have moved their token the correct amount, they also get to continue their turn. However, whenever a token ends its turn on the opposite gender wild card space, they must pick up a card and do whatever the instructions tell them to do (spoiler alert, these will always take you backwards at least one space). This only happens if the token ends on the space, if you move past it on your turn you don’t have to take a card (and ultimately go backwards). 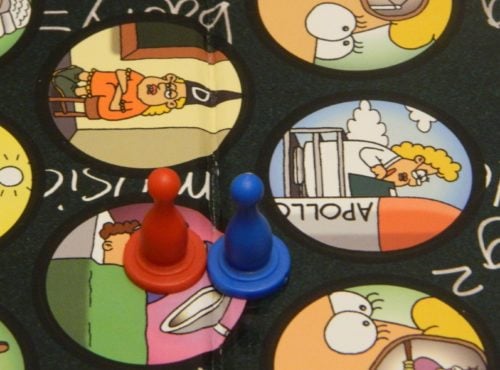 This male player has landed on the same space as a female player at the end of their turn. This means they can elect to take the female player’s token “prisoner” and return it to one of their starting positions until they can “free” it.

The final new mechanic in Battle of the Sexes: IQ Test is the concept of taking “prisoners.” Basically, if a player or team’s token ends its turn on a space occupied by an opponent’s token, they can take the token “prisoner.” If they elect to take the token prisoner, they place it in one of their gender’s starting positions until the player “frees” it (by getting their remaining token all the way across the board). After a token is freed, it is placed back at its starting position. A player or team’s second token can never be taken “prisoner” (since it would be impossible to free it).

My Thoughts on Battle of the Sexes: IQ Test

This review is not going to be pretty. To be frank, Battle of the Sexes: IQ Test is an awful game that will definitely make our list of the worst games we’ve covered so far. The game has some terrible mechanics, a lack of cards, and while the game is trying to make fun of gender stereotypes, I could make a good argument that some of the cards are almost offensively sexist in today’s world. Honestly, I couldn’t find a single positive thing about this game to write about and it was very lucky to avoid the dreaded 0/5 rating that only a couple games have received so far.

Let’s start with the almost universally awful mechanics. First up is the horrible idea of wild cards, something no trivia game should ever have. I know this isn’t exactly intended to be a serious game but adding luck to trivia games is a big no-no. Next is one of the worst mechanics I have ever seen in a game, the idea of trapping tokens. Anything that lets a player go from easily in the lead to last place is a terrible mechanic regardless of how serious the game is. Even if you somehow don’t mind the additional luck it adds to the game, its still a terrible mechanic because it just extends this already horrible game even longer. We got so fed up with this game’s mechanics that we just played until a player got one of their two tokens to the end.

In addition to the terrible mechanics, the rules for Battle of the Sexes: IQ Test are poorly written. Whoever wrote them probably spent five minutes writing them (way less time then I spent writing them for this post). Because of the poorly written rules, during our game we messed up the rule regarding opposite sex wild cards and would never have finished the game (since it is impossible to move forward with them). Luckily we re-read the rules and learned of our error after probably fifteen minutes of being constantly sent backwards. I know I’m partly at fault for it but the poorly written rulebook gets at least 50% of the blame.

Battle of the Sexes: IQ Test is also named poorly. While there are some math and word type questions that actually do test your IQ, I don’t think knowledge of action movies, car parts, and sports (the subjects of most male cards) and beauty supplies, chick flicks, and fashion (almost all of the female cards) in any way corresponds to your IQ. Oddly, Battle of the Sexes: IQ Test is kind of half-trivia, half-party game and fails at both. Some of the cards are strictly trivia questions about stereotypical manly or womanly things but others test your math or word skills. That is such an odd combination.

Finally, the production quality of this game is also terrible. While I will admit the art is pretty nice, there are so many stupid decisions and laziness when it comes to the components. First of all, why are the tokens the same two colors? If this game was strictly team-based it would make sense but this can be played in teams or as individuals. If you play as individuals, good luck remembering which token is yours. This is just a minor nitpick but the next two problems are major concerns. First up, many (if not most) of the cards basically need to be shown to the answering player instead of read (it is too hard to remember all the details of the question otherwise, especially for the math and word questions). You would think a smart game company would then decide to put the answers on the back of the card or at least away from the question but University Games stupidly decided to put them right underneath. Also for a party/trivia game with very few components, you would think that there would be a solid supply of questions. Nope, there are just 146 cards with three questions on them and 74 genius cards (which have one question per card). That means that Battle of the Sexes: IQ Test has just a little over 500 questions overall. That is pretty terrible for a trivia game and extremely lazy of University Games.

Finally, let’s get into the “humor” of the game. I know this was meant to be a “humorous” game making fun of stereotypes of men and women but the cards aren’t the slightest bit funny. In fact, some of them are borderline offensive. At least the game is an equal-opportunity offender since it makes fun of both men and women, however it does seem like the ones against women are more ridiculous. Apparently the game thinks that women are completely incompetent with anything technology-related (clearly not the case), while most of the male “jokes” aren’t even that insulting. I know the game is just trying (and failing) to be funny, but it feels kind of offensive when almost half the jokes about women are about them ordering takeout instead of replacing the light bulb in the kitchen or wasting time trying to watch a DVD in a CD player. Come on, University Games. This game was released in 2003, not the 1970’s. These “digs” just aren’t funny anymore (and they weren’t funny in 2003 either).

Should You Buy Battle of the Sexes: IQ Test?

Absolutely not. This game has so many bad mechanics and only a little over 500 questions. Also, while Battle of the Sexes: IQ Test is clearly attempting to be a funny take on a trivia game, it isn’t the slightest bit funny (and is borderline offensive at times). With all of these issues, this is clearly a complete failure of a game and one of the worst games we have reviewed so far. Battle of the Sexes: IQ Test wouldn’t even be worth trying if you got it for free (like we did from a rummage sale).

If you would like to purchase Battle of the Sexes: IQ Test, you can find it on Amazon or eBay.