At least here in the United States, one of the first introductions to operating a business for most children is a lemonade/sweets stand. I can’t ever remember running a stand myself but quite a few people can probably remember back to when they ran their own stand. This probably brings back some fond memories of a simpler time for a lot of people. As it turns out this hasn’t been forgotten by board game designers as there have been three different board/card games based on the topic. We ended up reviewing the 2012 Lemonade Stand card game a while back. Today I am looking at the 1979 Parker Brothers children’s board game of the same name. Despite the game having some old timey charm I didn’t have high expectations for it. Lemonade Stand may bring back some fond memories for some players but at this point it feels like an outdated children’s game that will bore most children and adults. 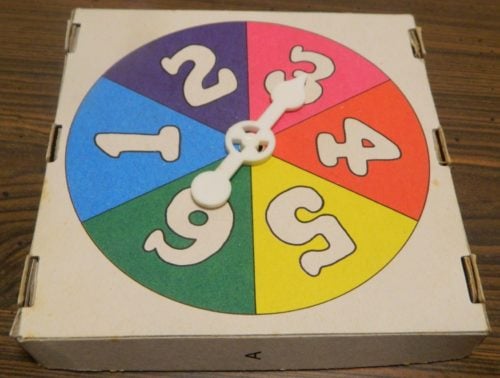 This player has spun a three. They will get to move their pawn three spaces. 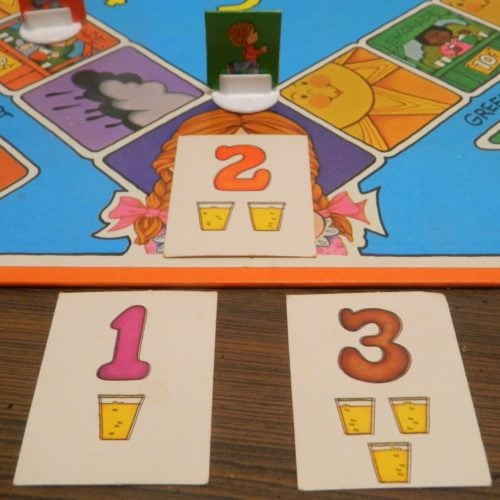 This player landed on one of the customer spaces. Currently there is a two card on the space. They can either play a one or a three card to this space.

When a player lands on a sun space they will be able to play their top lemonade card on any customer space that meets the criteria mentioned in the customer space section above. 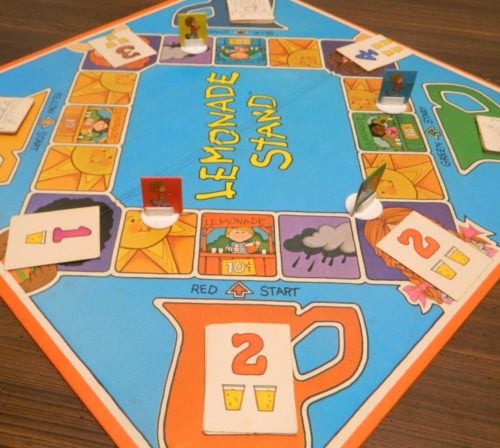 The red player has landed on a sunshine space. The top card from their own stack is a two. They can play their card to the space that has a one or three card on them.

If a player lands on a rain space they won’t do anything else on their turn. 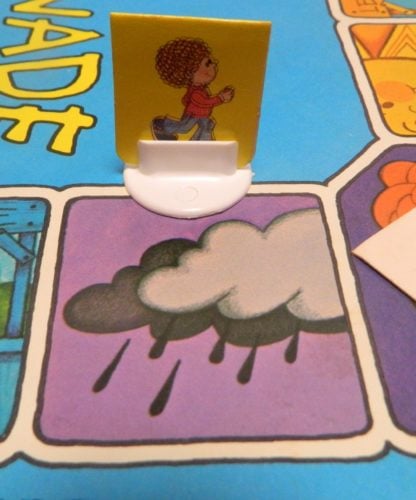 The yellow player has landed on a rain space. They will not get to take an action on their turn.

When a player lands on another player’s lemonade stand they will take the top card from that player’s stack of cards and add it to the top of their own stack of cards. 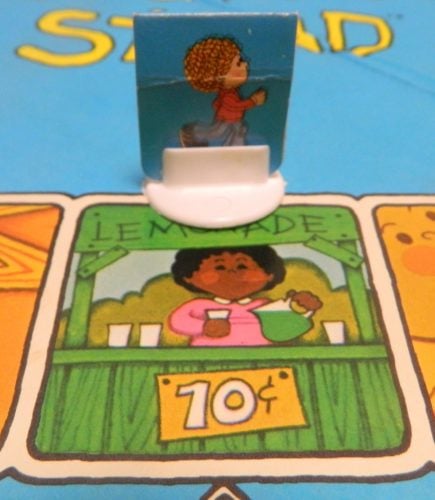 Finally when a player lands on their own lemonade stand they can give the top card from their own stack of cards to one of the other players to place on the top of their stack. 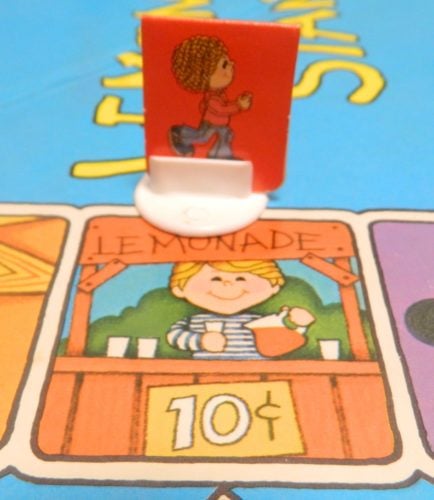 The red player has landed on their own stand. They will give the top card from their stack to one of the other players.

After a player has taken the action for their turn, play passes to the next player clockwise.

When a player gets rid of their last card they will win the game. 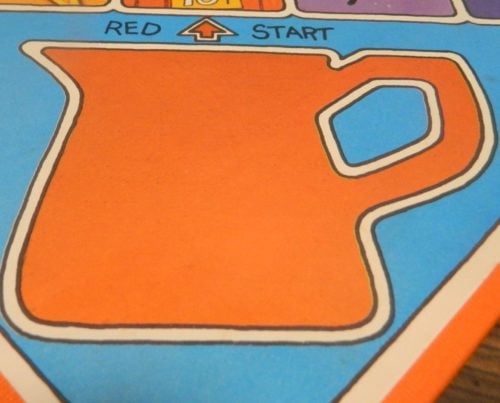 The red player has gotten rid of all of their cards so they have won the game.

My Thoughts on Lemonade Stand

Before playing Lemonade Stand I can’t say that I had high expectations for it. The only reason that I even took the time to play it is that I sometimes like trying out more vintage board games as they sometimes have a sort of charm to them. I didn’t give Lemonade Stand much of a chance because I thought it was going to be a really basic children’s roll and move game meant for small children. This feeling was reinforced by the fact that the game has an age recommendation of 4-8. Rarely do games with an upper age limit ever turn out to be anything more than games for really young children. This is unfortunately true for Lemonade Stand as well.

It is evident as soon as you begin playing that Lemonade Stand is a game only meant for younger children. You basically just spin the spinner and move your playing piece the corresponding number of spaces. You will then take an action based on the space that you landed on. This mostly involves playing one of the cards from your hand, giving one of your cards to another player, or taking a card from another player. The game continues with players taking turns until one player gets rid of their last card and wins the game.

Not surprising Lemonade Stand is really simple. In order to play the game players basically only need to be able to count up to six and follow basic rules. You should be able to teach the game to a new player within a couple minutes. This simplicity also leads to the game playing quickly. I would say that most games can be finished in 10-15 minutes. With the game being so simple I could actually see it working as an educational tool. The game requires basic math skills as you count the spaces you have to move as well as determine whether you can play your next card to the gameboard.

I could see some people enjoying Lemonade Stand. Being released back in 1979 I am guessing some people will have fond memories of the game from either playing the game as a child or playing it with their own kids. From the theme to the art style I could see some people that really enjoyed their time with the game when they were children still getting some enjoyment out of the game today due to their memories. I could also see some young children today having some fun with the game. Unfortunately I don’t see most people getting much out of the game.

The problems with Lemonade Stand mostly come from the fact that it was designed for young children 40 years ago. It is not surprising that a game made for young children forty years ago wouldn’t feature much strategy. The reason there is very little strategy is due to there being very few decisions in the game. You have no control over where your piece will land. There are only two times in the game when you can even make a decision. First if you land on your own lemonade stand you can choose who to give your top card to. Otherwise when you land on a sun space you may have more than one option for where you can play your card. Otherwise the game basically plays itself as you spin, move your pawn, and take the corresponding action.

As the game gives you few opportunities to make a decision, you are left with a game that relies on a lot of luck. Luck in Lemonade Stand comes from a few areas. The most obvious is what you end up spinning on the spinner. There are clearly spaces that are more beneficial than others. The player who lands on more of these spaces is clearly going to have an advantage in the game. Other than what space you land on, the top card on your stack is going to have a big impact on how successful you are. In order to get rid of your next card it has to be one number above or below the card(s) that you are trying to play it on. Having a two or three on top of your pile helps out a lot as they can be played on top of two different numbers while ones and fours can only be played on top of one card. Players that keep getting cards that they can play right away are going to have a big advantage in the game. If you have a card that you can’t play on any of the piles though you will have to wait for a player to land on a space allowing you to give the card to another player or wait until one of the face up cards on the gameboard are changed.

The combination of these issues lead to Lemonade Stand being a pretty boring game. The gameplay is so simple and luck based that I can’t see any adults enjoying the game outside of people who have nostalgia for the game. The biggest problem is that I don’t even know how fun the game will be for younger children. The game is simple enough that children should have no trouble playing it. I don’t know how many will want to play it though. Due to its simplistic gameplay and somewhat outdated style, I don’t really see Lemonade Stand holding children’s attention for very long. Unless they are really interested in the Lemonade Stand theme I would think most younger children would prefer a newer game as they tend to contain a little more excitement.

Speaking of the components I don’t think they help the game. When it was first released the game’s artwork was probably pretty good. Unfortunately in the last forty years the game’s style has become kind of outdated. I could see some people liking the more vintage style as it could bring back some nostalgia from a simpler time. The artwork feels a little basic compared to children’s games produced today though. The component quality is pretty basic as well. Most of the components are made of pretty thin cardboard meaning they are susceptible to creases. The gameboard is your typical 1970s Parker Brothers gameboard. Overall the components serve their purpose but feel a little outdated at this point.

I can’t say that I had high expectations going into Lemonade Stand and unfortunately the game lived up to those expectations. Lemonade Stand was a game made for young children and it shows. The game is quite simple to play as you could probably teach the game to new players within a couple minutes as it only requires players to be able to count to six as well as follow basic instructions. For this reason the game plays really quickly. Unfortunately due to the simplicity there isn’t much to the game. There are very few decisions to make. This leads to the game relying almost entirely on luck and ultimately being a boring game. On top of all of this the components are quite basic.

I have a hard time recommending Lemonade Stand as it just isn’t a very good game. If you don’t have any young children or have nostalgic feelings for the game, there is no reason to pick up Lemonade Stand. I don’t even see young children enjoying the game unless they really like the theme. I basically can only recommend the game to people who have nostalgia for the game from either their own childhood or from playing the game when their children or grandchildren were young.