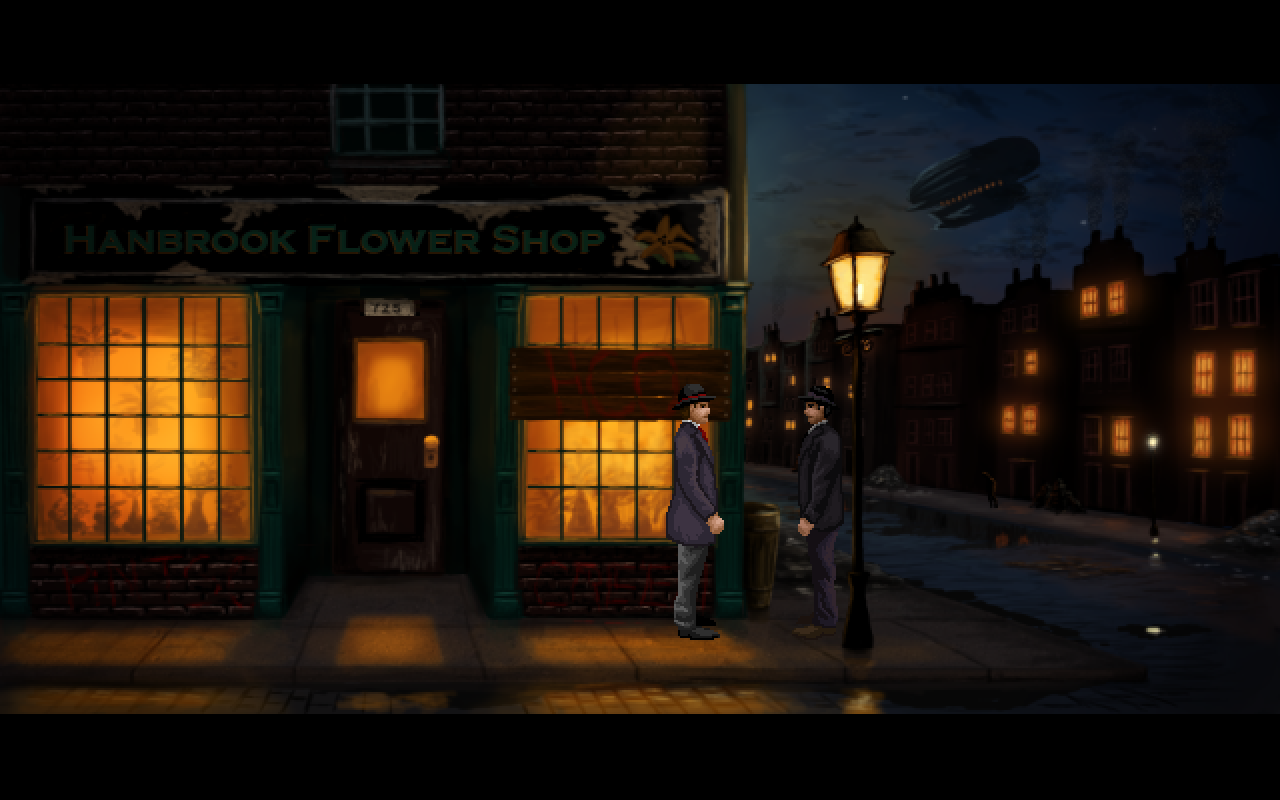 I will be quickly outlining the premise of Lamplight City in this paragraph which contains a spoiler from the game’s first case which is revealed in the first half hour of the game. If you want to avoid this spoiler I would recommend skipping the rest of this paragraph. The story of Lamplight City takes place in an alternative 19th century in the city of New Bretagne. The city of New Bretagne is a city that is undergoing a renaissance under steam tech and other technological advances. You play as the police detective Miles Fordham. After his partner is murdered during their last case together (the first case in the game), Miles is haunted from beyond the grave by the voice of his former partner. No longer a police detective Miles must keep his sanity in check while searching for his partner’s killer and solving other crimes from around the city. Can Miles bring the criminals of New Bretagne to justice or will he succumb to his own madness?

At its core Lamplight City shares a lot in common with your typical point and click game. For those of you who have never played a point and click game before, the title is pretty self explanatory as you mostly just point and click. Basically you explore different environments clicking on objects/people in order to gather clues/information or pick up objects that you need to solve puzzles. You use these mechanics to solve cases which ultimately progresses the story to its conclusion. In general if you have ever played a point and click game before the gameplay in Lamplight City is going to feel a lot like most of the other games from the genre that you have played. I would say that there are three things about the gameplay that somewhat distinguish Lamplight City from the rest of the genre.

The most prominent addition to the genre is the fact that you can choose how you want to handle each case. The game presents you with several different suspects which includes one correct solution and a couple convincing false leads. Your decisions in the game have some impact on the game as you might not be able to collect a crucial piece of evidence needed to correctly solve a case if you upset a witness. While there is a correct solution to each case, Lamplight City allows you to accuse any of the suspects in the case and in some cases even lets you give up on a case. I haven’t extensively tried different solutions to cases to see their impact on the game but after a little experimentation I did notice that the decisions you make in the game do have some impact on the story. The game does come back to cases and events later on in the story and how the characters react depends on how you solved the case. I don’t think your decisions significantly impact the gameplay but they do have an impact on the story.

The second biggest difference between Lamplight City and your typical point and click game is that you don’t actually have an inventory in the game. You will acquire items and information throughout the game. Instead of having to select the proper item to use it with the environment, Lamplight City automatically chooses the right object to use in a given situation. I have to admit that I had some mixed feelings about this mechanic. In some ways I like it as it streamlines the game’s inventory system so you don’t get into a situation where you have to randomly try items until you find the right combination. On the negative side this makes the game significantly easier (more on this later). The inventory system simplifies the puzzle solving as once you have found all of the items/information, you can just click on all of the clickable areas and eventually run into the solution.

The final difference between Lamplight City and your typical point and click game is that the game tends to rely more on dialog than finding items and solving puzzles. The dialog mechanic basically involves choosing from different prompts to get information from people. There are some responses that will upset the person and prevent them from giving you more information but most of the time you can ask them every question with no issues. As the game is a detective game it makes sense that the dialog system gets a lot of use. Each case in the game basically follows the following process. At the beginning of the case you are given a couple locations to visit and witnesses to question. You will fully explore these locations which will give you information and items which you can then use to open up new locations and witnesses. As you gather additional information you will have to revisit witnesses in order to get more information out of them. There is nothing wrong with the dialog system but I wish there was a little more to it especially as you spend quite a bit of the game using it.

On the story front I think Lamplight City does a great job. While the game has some light sci-fi elements, I would say that the story is more of your typical crime drama set in an alternative 19th century that also has steampunk influences. The game consists of five main cases and one mini case that you need to solve while occasionally getting some clues about the big mystery that the game is centered around. For the most part the story is told really well. The cases are interesting. Some of them are kind of predictable but others have some unexpected twists. Despite the story taking place in the 19th century it actually has some interesting commentary on today’s world especially revolving around new technological advancements. Don’t worry though as the game doesn’t get political and doesn’t take sides on these issues. If the premise behind the game sounds interesting to you I think you will enjoy Lamplight City’s story quite a bit.

Helping out the game’s story is the fact that the game’s production quality is quite good. The art style is not going to appeal to people who hate pixel art but I thought it was really well done. The pixel art gives the game its own unique style that really helps with the game’s theme/story. In addition to the art style I actually thought the voice work was pretty good for the most part especially for an indie game. Some of it is better than others but it really gives character to the people you meet throughout the game. The characters in Lamplight City are really interesting and well crafted for the most part.

On the puzzle front I would say things are a little murkier. In general I would say that the puzzle design is pretty good. The puzzles are creative and fun. The cases have enough twists and turns to keep them interesting. The game also avoids the dreaded puzzles where you have to think exactly like the designer in order to figure them out. The problem is that the puzzles are not particularly challenging. You can theoretically fail to solve the cases but it is quite easy to avoid these situations and you could easily just return to a previous save. If you are thorough in searching the locations and questioning the witnesses, you shouldn’t have too much trouble solving the puzzles. If you hit a roadblock it will likely be due to you missing a clue. With the streamlined inventory system you don’t have to figure out where/how to use an item as you can just click on everything and you will eventually find the right place to use the item.

While I prefer this over the game being frustratingly difficult, I really think Lamplight City would have benefited from being a little more challenging. I do play a lot of point and click games so this might have somewhat contributed to the game being too easy. Nonetheless I don’t think a lot of people are going to be that challenged by the game. If you are willing to put in the time you shouldn’t have any troubles correctly solving each case and finishing the game. This is especially true for people that play a lot of these type of games. The difficulty doesn’t ruin Lamplight City but it keeps the game from really challenging people. You can still have fun with the game but don’t expect a highly challenging experience.

One area where I was a little surprised was Lamplight City’s length. Based on my experience most point and click games seem to last around 6-10 hours. Some games may take a little longer but that is usually due to some particularly hard puzzles that take quite a while to solve. I would say that Lamplight City should take most players around 10-13 hours to complete if you are thorough. If you aren’t as thorough you could maybe shave off two or so hours. With the game retailing at $15 this is pretty good value in my opinion. If you like point and click games you should get your value out of the game.

Lamplight City may not be the best point and click game that I have ever played but it is still quite a good game. The story feels like a typical mystery/crime drama that takes place in a steampunk themed alternative 19th century. The story is well crafted and supported by good visuals and voice over work. The gameplay is similar to the rest of the point and click genre. The game does give players some options when solving cases allowing players to incorrectly solve them which impacts the story going forward. This doesn’t drastically change the game but it is an interesting little twist to the point and click formula. Lamplight City also streamlines the typical inventory system where it automatically uses the correct item when you click on the appropriate area. While I like how this streamlines things, it does make the puzzle solving pretty easy. While I had fun with Lamplight City, I wish it would have been a little more challenging.