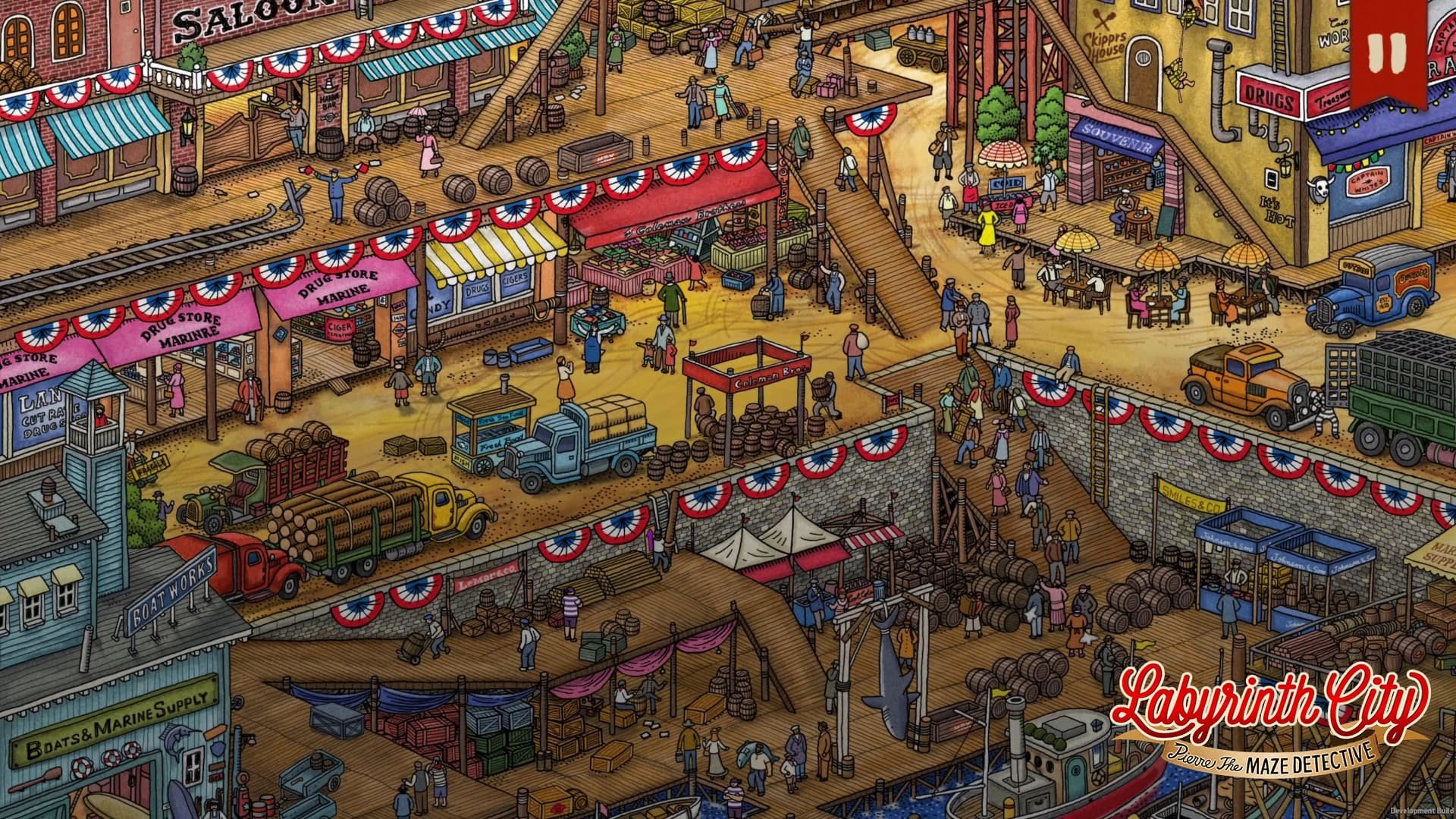 I have mentioned it a few times on Geeky Hobbies in the past, but I was a pretty big fan of the Where’s Waldo? series of books when I was a child. For those not familiar with the series the basic premise was that a character named Waldo and his friends would hide in various locations amongst a bunch of other people and objects. The goal was to find them. I bring this up because when I saw today’s game, Labyrinth City: Pierre the Maze Detective, it immediately reminded me of Where’s Waldo?. The game is actually based on the series of books of the same name where the object is to move through a gigantic looping maze in order to reach the exit. The game was first released back on PC last month and is making its Nintendo Switch debut today. Labyrinth City: Pierre the Maze Detective is a surprisingly fun and charming little interactive maze game that can delight players of all ages.

Mr. X is at it again. The Opera City Museum was running an exhibit on the famous Maze Stone when Mr. X stole the stone. The stone has the magical ability of turning everything around it into a labyrinth/maze. Pierre is called onto the case as he is the best maze solver in the world. Will Pierre be able to catch Mr. X and return the Maze Stone to its rightful owners?

Probably the best way to describe Labyrinth City: Pierre the Maze Detective’s gameplay is to say that it feels like an interactive maze. In each location you need to find a number of characters on your way to reaching the exit. This sounds much easier than it is though as each location is a huge maze where there is no direct path to any given location. The paths are set up in a way where you have to loop back and forth in order to reach your destination. Sometimes there are simple puzzles that block your path as well.

I have played a lot of video games and I can’t recall ever playing one quite like Labyrinth City: Pierre the Maze Detective before. The idea of a whole video game being built around moving through giant mazes was something that I never really considered. I thought how fun could it be to walk through mazes. This is one of the reasons that I was genuinely surprised by how much I enjoyed the game. While I have nothing against mazes, they really aren’t something I would go out and actively search for as I generally prefer other types of puzzles quite a bit more. Despite all of this, the gameplay is oddly satisfying. For some reason it is fun walking through the mazes trying to find the exit.

This is where the maze design has to be credited. The mazes do seem to have been taken from the book series so I don’t know if the developers of the game or the artists for the original books deserve most of the credit. I think one of the main reasons why the gameplay is satisfying is that the game does a really good job setting up the mazes. Instead of using boring walls and obvious obstacles to block your path forward, the game uses characters and other obstacles that add to the game’s charm. The game does a great job using the expansive size of the locations in order to cram as large of a maze in as possible. You may be able to see your target destination right away, but you will then have to loop back and forth for quite a while before you are actually able to reach it.

I applaud the game’s maze design, but it is pretty obvious that the game was designed with children in mind. Adults will likely enjoy the game as well, but I wouldn’t say that the game is particularly difficult. If you are just focused on reaching the end of the maze, you could probably do so in just a couple of minutes. While there are a lot of dead ends, the path forward is usually pretty obvious. This is further cemented by the fact that the game includes arrows hidden in the environment that point you in the right direction should you get lost. If you are looking for really challenging puzzles, you may be disappointed. The good news with the easier difficulty though is that the game can likely be enjoyed by people of all ages.

The only thing that really adds any difficulty to the game is the hidden collectibles. These are quite a bit harder to find than the actual exit. For those that want to find all of the collectibles it basically becomes an exercise of trying every single path even when you can tell that they are dead ends. If you are thorough you should be able to find most of the collectibles, but some might still be hard to find. The game has three main collectibles: sheets of papers, stars, and treasure chests. The stars and treasure chests can be seen hidden in the environment, while the sheets of paper usually require you to interact with an object to reveal them. The last collectible in each level is a short little mini game/challenge which when completed will give you a little trophy. These collectibles seem to be completely optional, but they do add quite a bit of time and challenge to a game that otherwise would be kind of short and easy.

Going off the beaten road searching for collectibles shows off Labyrinth City: Pierre the Maze Detective’s greatest asset. What initially intrigued me about the game was that it reminded me a lot of Where’s Waldo?. What I liked about that series was just its overall atmosphere and charm. While not exactly the same, Labyrinth City: Pierre the Maze Detective does have a very similar feeling to it which is a great asset for the game. The story is kind of kiddie, but that is okay. The game is oozing with charm. Just interacting with everything that you can inside each maze is half the fun of the game. There are a ton of Easter Eggs spread out amongst the mazes ranging from video game references to other pop culture nods. The game is just so charming that it is hard not to smile while playing the game.

Outside of the game being kind of easy at times, probably the biggest issue that I had with Labyrinth City: Pierre the Maze Detective is the fact that the controls aren’t always perfect. The controls are quite straightforward as you mostly just walk around and then use a button to interact with things that you are nearby. The main problem with the controls is that you sometimes need to be in a very specific area to go down some of the paths. This mostly happens when there are branching paths as the game thinks you want to continue down a path when you actually wanted to move onto one of the attached paths. On top of this it is sometimes a little hard to tell where you can and can’t move. I love that the game uses non-traditional barriers to block your path, but sometimes it looks like you should be able to move through an area when you can’t. The controls are not a huge problem as they usually work just fine. They can occasionally be an annoyance though as it will take a little time to move where you want to go.

As for Labyrinth City: Pierre the Maze Detective’s length it is going to depend on what you want to get out of the game. The game has ten levels/mazes. If you are just interested in getting to the end of each maze, you could probably finish a lot of them within just a couple of minutes. If you fully explore all of the locations though the length of each level grows exponentially. It takes time to find all of the collectibles in each level. Overall I found the length to be fine. I obviously would have liked more mazes to have been included, but you can get enough time out of the game if you try to find all of the collectibles.

I was initially intrigued by Labyrinth City: Pierre the Maze Detective as it reminded me a lot of Where’s Waldo?. I ended up being kind of surprised by the game. I never thought I needed an interactive maze video game, but apparently I did as I actually really enjoyed the game. It is fun exploring the mazes as they are well designed as you have to loop back and forth in order to make progress. The game has a ton of charm as well where it is hard not to smile while playing the game. I will say the main game is not particularly difficult as you can solve most of the mazes within just a couple minutes. The hidden collectibles add some difficulty and length to the game though. The controls work well for the most part, but can become a little frustrating at times.

Basically my recommendation for Labyrinth City: Pierre the Maze Detective comes down to your thoughts on franchises like Where’s Waldo? and whether you think you would enjoy an interactive maze game? If the premise doesn’t sound all that interesting to you, the game likely won’t be for you. If you are looking for a charming game that the whole family can enjoy though, I think you should look into picking up Labyrinth City: Pierre the Maze Detective as you should enjoy it.