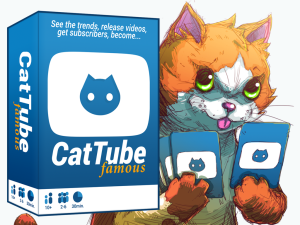 With the Internet’s fascination with cat videos, its not surprising that there is now a card game based on cat videos.

I don’t know what to think about CatTube Famous. It looks like a pretty simple quick filler card game that is going to rely heavily on its’ theme. The game doesn’t look bad but it doesn’t look that unique either. If you like cat videos you probably will enjoy CatTube Famous but I am not so sure other people will enjoy the game.

CatTube Famous is being created by Joshua Harvey and Liam Alkamraikhi. The campaign has already reached its’ funding goal and is currently working on stretch goals. The campaign runs until September 3rd, 2015. Kickstarter Page 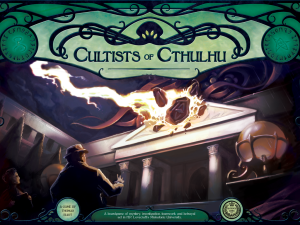 In Cultists of Cthulhu you play a student at Miskatonic University. A gateway has opened up which will allow eldritch horrors to enter our world. The players must work together in order to complete various goals in order to stop the spread of evil. Things won’t be so easy though since one of the players is a traitorous cultist of Cthulhu who is trying to kill all of the other players in order to bring evil into the world.

Just looking at the Kickstarter page for Cultists of Cthulhu, it looks a lot like other survival horror games like Betrayal at House on the Hill. My biggest concern is with how original the game will be. There are already quite a few games in this genre so it will be hard for Cultists of Cthulhu to stand out.

The game does seem to be trying some new things though. The game board is randomly created for every game so you should never play the same game twice. The game also comes with different scenarios which can last between 45 minutes and three hours so players should be able to pick a proper scenario for the amount of time they have available.

The most interesting idea in the game is one of the die rolling mechanics. The dice in the game have symbols that correspond to good things, bad things for the current player, and bad things for the entire group. After rolling the dice, each player can choose to either re-roll all the bad dice that affect them or the dice that affect the entire group. I think this mechanic will be interesting since the players will need to make a decision of whether they will sacrifice themselves for the well being of the group or if they are going to look out for themselves. This also provides opportunities for the cultist to adversely affect the game without drawing attention to themselves since they can try to sell their actions as trying to save their own character.

The Cultists of Cthulhu is being made by Sixpence Games. The campaign is looking for $35,000 and is already most of the way there. The campaign runs until September 3rd, 2015. If you would like a copy of the game you must pledge at least $60. Kickstarter Page 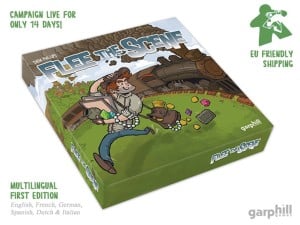 In Flee the Scene you play as a thief traveling through Europe robbing museums and selling off the loot you have collected.

What interests me about Flee the Scene is that it seems to fit perfectly in that light to moderate strategy level of games. The game seems easy enough for older children to play but also seems to have enough strategy that adults won’t bore of the game quickly.

The movement mechanic in particular looks kind of interesting. Each player will control two movement tokens (truck, train, boat) with there also being a group of tokens on the game board. At the beginning of a player’s turn they need to choose one of their tokens and add it to the game board. The player then uses three of the tokens on the game board in order to move using those types of transportation. The final token the player takes for themself. I find this to be an interesting mechanic since it looks like you need to think about what you want to do on your current turn and on future turns when you choose which tokens to use. You also need to keep the other players in mind since your actions will determine what types of movement they can use on their turn.

Flee the Scene is being made by Shem Phillips. The Kickstarter campaign is looking for around $8,000 and runs until August 18th, 2015. Kickstarter Page 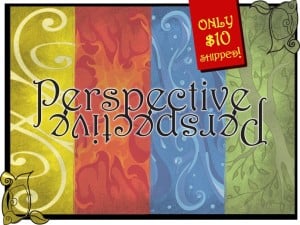 In Perspective you need to match the color and order of the cards from your hand with your goal card. That sounds pretty easy doesn’t it? Well once you draw your cards you no longer can rearrange them in your hand (without using a special ability). Also instead of playing with the side of the card that you can actually see, you are playing with the backside of the card. Therefore you need a good memory in order to remember the backs of all of your cards.

In order to help you with your task each card has a special ability that will help you achieve your goal. Once you think you have your cards arranged properly you can set them down on the table. If you are right you win but if you are wrong you are eliminated from the game so you need to be sure that your cards are correct.

I really don’t know what to think about Perspective. I am generally not a big fan of memory games but Perspective seems like an interesting concept for a game. It is the type of game that you will probably have to play before you can actually know whether or not you are going to like the game. The good news is that it does not require a large pledge in order to receive a copy of the game (USA $10, Canada $11, International $14). The game has also already reached its’ initial goal which means that it will be produced.

Perspective is being made by Minion Games. The campaign runs until August 17th, 2015. Kickstarter Page 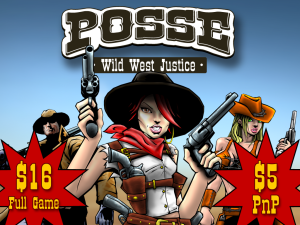 In Posse: Wild West Justice you play a group of lawmen in the wild west. You and the other players are competing in order to try and bring in as many outlaws as you can for the reward money.

At the beginning of each round, new outlaws are put out for players to try and capture. Players add “posse members” to their group who have special abilities that either help your chances of catching outlaws or hurts your opponents’ chances. Each player then gets to assign their six dice (more if they have a special ability granting more) to all of the outlaw cards of the current round.

I don’t know what to really think about Posse. It is a dice rolling game and it appears to rely heavily on luck which I usually don’t like. The game does have an interesting theme though and it looks like it could have more strategy than your typical dice rolling game.

Posse: Wild West Justice was made by Scott Hansen. The Kickstarter campaign is looking for $3,500 and runs until September 1st, 2015. Kickstarter Page 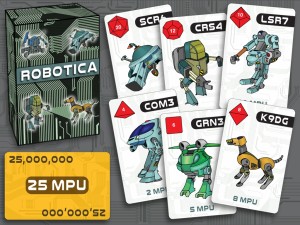 © All The King’s Games

Welcome to the future where countries use robots in order to settle their battles. You and the other players represent different countries in this all-out robot battle.

At its’ core Robotica is a dice rolling game. While a lot of dice rolling games don’t interest me, Robotica looks interesting since there are some strategic decisions that you can make. At the beginning of each round, all of the players are given some money in order to purchase different robots to use in combat. Each robot has a different cost and strength. You can choose to spend a lot of money for a couple strong robots or you can spend a little on a bunch of small robots.

Each robot has a different die associated with it which is pictured on the card. More expensive robots will use a die with more sides which increases their odds of beating a weaker robot. In the battle phase robots face off against one another by rolling their dice and the robot with the lower number is destroyed. Whoever destroys all of the other players’ robots first will win the game.

Robotica is being created by All the King’s Games. The campaign is looking for $1,000 and runs until September 4th, 2015. Kickstarter Page