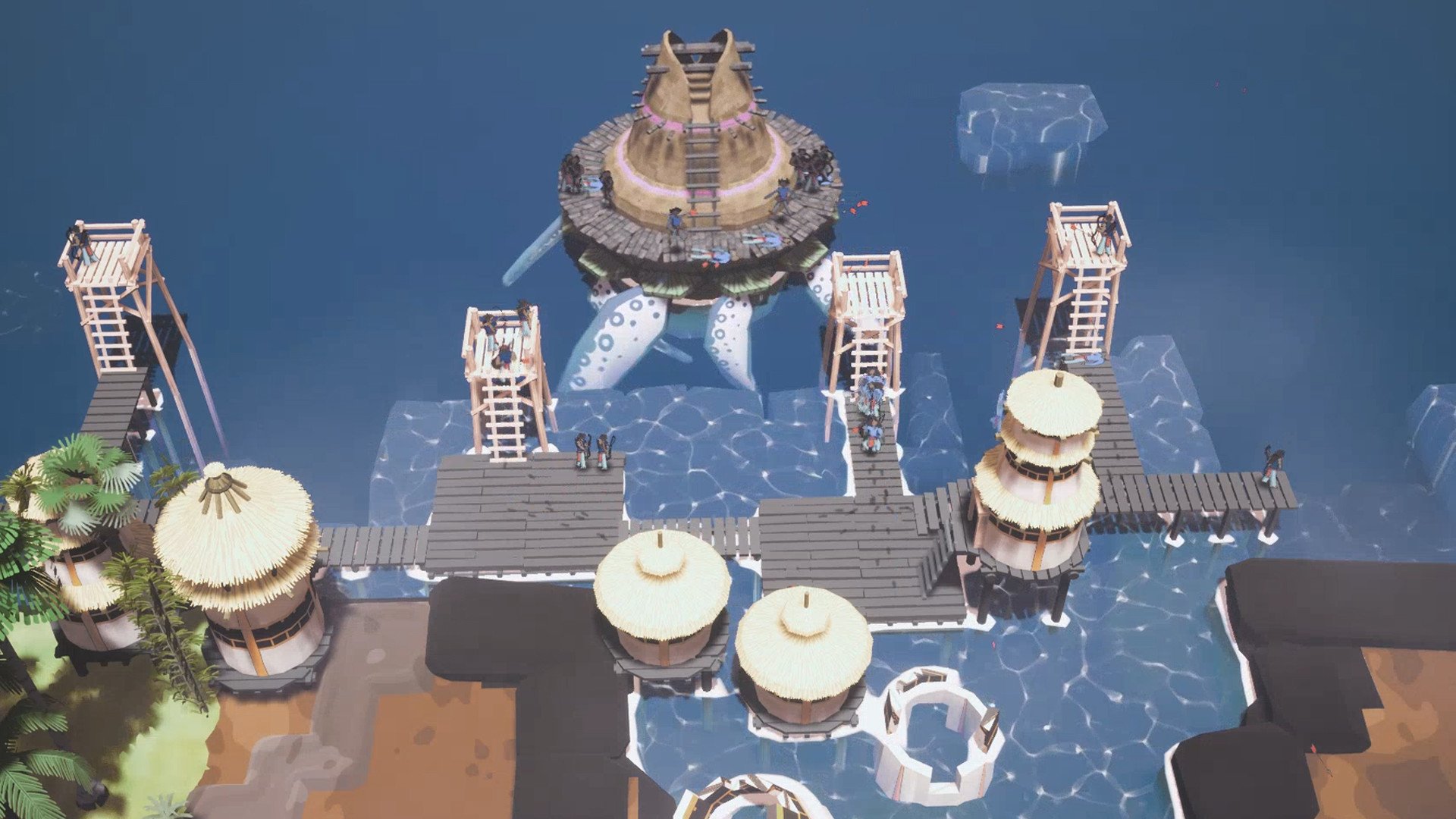 Being a pretty big fan of the city builder genre, I have seen quite a few different twists on the genre. I have to admit that I can’t ever recall playing a city builder mixed with roguelite mechanics though. Well that is the premise behind Kainga, which I am taking a look at today. While I am not usually the biggest fan of roguelites, I was intrigued by Kainga as the premise behind the game seemed interesting. Kainga is an interesting and fun take on your typical city builder which relies a little too much on RNG at this point.

If I were to describe the gameplay of Kainga I would say that it feels like a combination of a city builder mixed with a roguelite. Before you begin a game you will choose one of the Thinkers that you have unlocked as well as a location and objective. These choices will determine what special abilities that your civilization will have along with the type of resources that they will have available to them. The objective you choose will determine what you need to accomplish in order to successfully complete your mission.

Once you arrive at your starting location you will choose where you will setup your campfire. You will then start to use your Thinker to develop new technologies for your civilization. These range from different types of houses, to different ways of gathering resources, to even ways to equip your civilians for combat. After you research some technologies you can tell your people to build certain buildings which they will gather resources from the environment to build. After researching a number of technologies your Thinker’s energy will be depleted so you will have to hold festivals to recharge their energy. In addition to dealing with other hostile tribes, you will have to deal with dangerous creatures as well as weather and the environment itself. If you complete your objective you will have successfully completed your mission. Even through failure though you will receive resources which you can use to acquire new technologies and types of Thinkers for your next run.

I found Kainga to be a pretty interesting game. The basic gameplay is pretty similar to your typical city builder. You have your workers gather resources to construct the buildings that you instruct them to make. You also research new technologies which gives various benefits to your group. Occasionally you have to deal with other tribes by meeting their demands to avoid conflict or arming your people to fight them. For the most part I had fun with the game for the same reason that I do with a lot of city builders. It is fun building your civilization and hoping that it will continue to grow and advance. For this reason I think most fans of this genre will likely enjoy Kainga.

What I found interesting about Kainga is that instead of long drawn out games, the game seems to focus more on quicker games where you can complete your objective pretty quickly. I would guess that most games of Kainga will usually take around 20-30 minutes to complete. It is interesting to play a shorter city builder as most are considerably longer. Kainga gets right to the point where you only need to research around seven technologies and then complete your final objective in order to win the game. Generally I prefer the longer process of building out your city, but the shorter sessions was kind of refreshing for the genre. It allows you too easily finish a couple games in one sitting instead of going back to the same game day after day. This isn’t going to be for everyone, but I thought it was an interesting twist on the typical game from this genre.

In a way Kainga feels like a streamlined city building game. This doesn’t mean that the game has limited content as it seems to have quite a few different types of technologies as well as other factors that impact the success of your civilization. What I mean by this is that instead of going through tons of different research topics or wiping out huge civilizations, you can focus on a simpler task which doesn’t require hours of setup to achieve. Normally I am not a big fan of roguelite mechanics as I don’t like losing all of the progress that I have made. I didn’t really mind this element in Kainga though due to the shorter length and the fact that most failures will lead to new technology and other benefits that should help with future playthroughs.

Maybe I was just unlucky while playing Kainga, but at times the game can be pretty brutal. A lot of this has to do with the fact that the game can rely on quite a bit of RNG (random number generation). From the world you are spawned into to hostile creatures and tribes that spawn near you, in some situations your fate is almost sealed before you even begin playing the game. If luck is on your side you likely will do well. If it is not, your civilization will likely fail in spectacular fashion.

Why don’t I just say that my experiences with the game so far have been kind of unlucky. My runs have ended in a number of different ways. Twice I was attacked by one of the giant creatures and they pretty much killed all of my people even though I never provoked them. One mission I would have completed but the escape boat that I built never launched due to I believe an error of some sort. Once a fire started in my town and pretty much set all of my buildings on fire. Most runs ended though with one of the neighboring tribes attacking me unprovoked and killing all of my people. This normally would be a much bigger issue, but the fact that each mission is pretty short lessens the feeling of failing due to bad luck.

As for the game’s overall atmosphere and story I thought it was interesting. At this point the game doesn’t really have a story as each game is its own little journey towards creating a successful civilization. These only overlap due to the research that you are able to carry forward. In some cases your civilization develops its own little story which can be interesting. As for the visuals the game uses a strange combination of 2D and 3D. The world is 3D as well as the buildings and creatures. All of the inhabitants are 2D though. The difference between the 2D and 3D elements creates an interesting dynamic. Some may not like it, but I thought it worked well.

Kainga just entered Early Access and is expected to stay in the process for at least a year. At this point I think the game is off to a good start especially for a game being developed by a one person team. The game has an interesting take on the typical city builder game by adding roguelite mechanics as well as streamlining the process. Instead of games that take hours to complete, most games will be completed within 20-30 minutes. I found the gameplay to be pretty fun as it is enjoyable building up your civilization hoping that it will grow and survive despite everything that threatens its survival. At this point the game does seem to rely on too much RNG though. If luck is on your side it won’t be that hard to complete your objective, but if it isn’t you will likely fail as it is hard to overcome hostile tribes/creatures/weather.

If you don’t really care for city builders or don’t think the game’s premise sounds all that interesting, Kainga may not be for you. Those that are intrigued by the premise though should look into Kainga and consider picking it up.