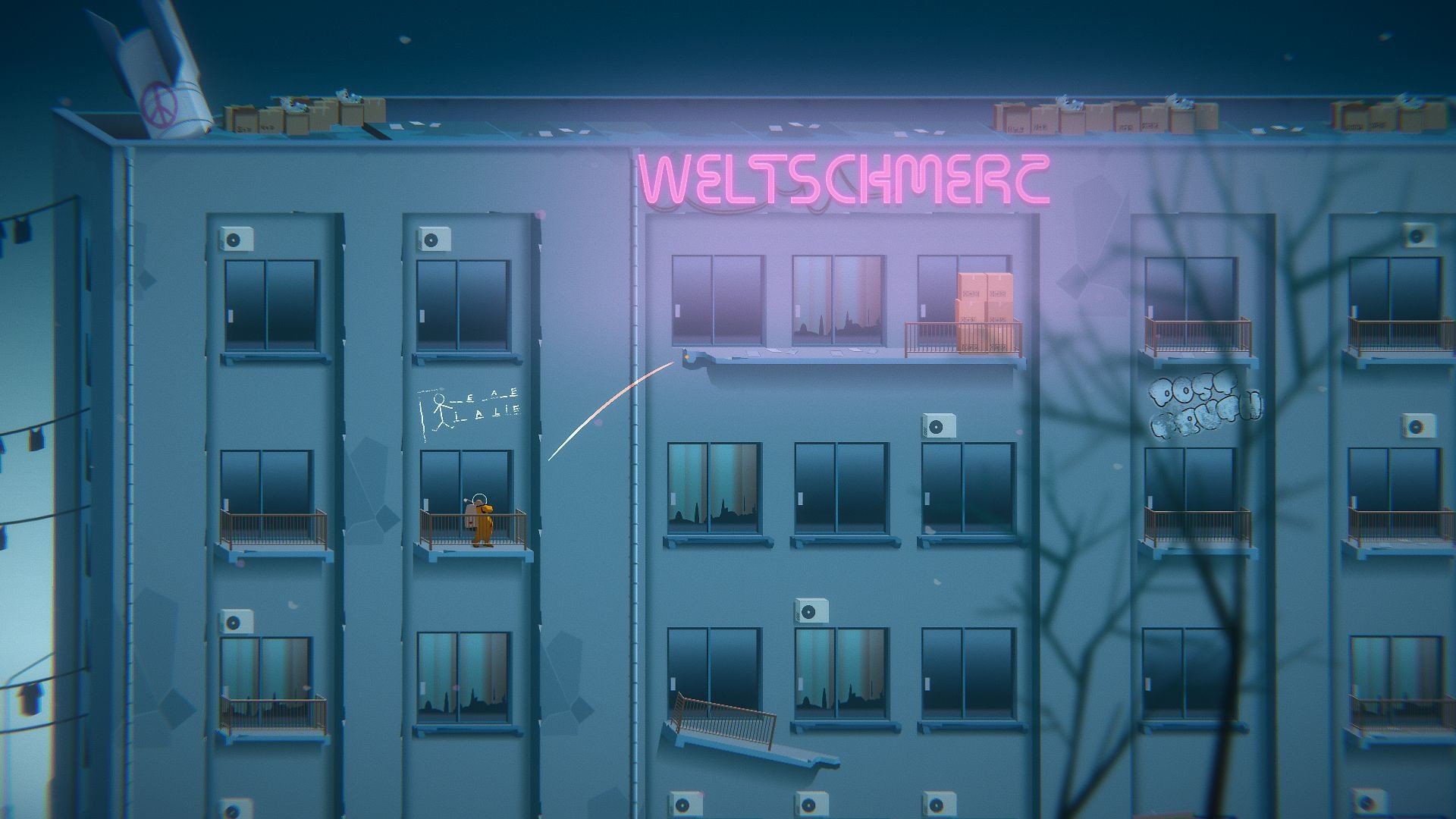 In general I have mixed feelings about the game of golf. I have absolutely no interest in watching the sport, but it is moderately fun to play outside of the fact that I am not very good at it. As for golf video games, I don’t have particularly strong feelings either way. I wouldn’t say the genre is one that I actively seek out, but I occasionally enjoy checking out a new game especially if it tries to do something new. This is what initially intrigued me about Golf Club Wasteland as instead of a traditional golf game, the game has you playing golf in a wasteland after humanity has left the planet. This seemed like a unique enough premise that I was intrigued. Golf Club Wasteland is probably one of the most interesting golf games that I have played in a long time.

Golf Club Wasteland takes place in the future. Earth has become uninhabitable so humanity left the planet to resettle on Mars. Now a wasteland, the rich travel back to Earth occasionally to play golf in the wreckage. You play as Charlie who has decided to return to Earth to play a round of golf as well as revisit the planet he left behind. Returning to Earth Charlie soon discovers that things have changed a lot since humanity left.

Golf Club Wasteland is in many ways your typical 2D golf game. The game consists of 35 holes where the objective is to try to get your ball into the hole in the least number of shots as possible. To shoot the ball you use an analog to set the angle and the power of your shot. What makes Golf Club Wasteland different from your typical 2D golf game is that instead of playing on traditional golf courses, the course has been made around the crumbling remains of what used to be civilization. Instead of lush greens you will shoot your ball through abandoned buildings and other things left behind as humanity made their quick escape to Mars.

Golf Club Wasteland is a golf game, but in many ways it is more than that. The game actually has a lot of puzzle elements sprinkled in due to the environment that you are playing in. Shooting at the right angle and using the right amount of power is still very important to your success, but you also need to use the environment to your advantage. Many of the levels have multiple paths to the hole and some even have secret paths which let you bypass much of the hole. Bouncing your ball off walls and using the environment in other ways can save you strokes making it easier to complete a hole below par.

While I have nothing against golf games, I don’t generally play a lot of games from this genre as I just prefer other genres more. If you don’t like golf games at all, Golf Club Wasteland likely won’t be for you. You are playing golf after all. Between the environment that you are playing in along with the puzzle elements, the game feels like more than just a typical golf game though. In a way the game kind of feels like a wacky combination of regular golf and mini-golf as you use the obstacles to help you progress. For this reason I think the game stands above most golf games and can maybe even appeal to those that aren’t the biggest fans of this genre.

I think the game works because the gameplay is quite satisfying. I will say that the controls can be a little finicky at times. It could have been somewhat due to my controller, but it was sometimes hard to get the exact amount of power or angle that I wanted on a shot. As I progressed in the game this got better as I got more used to the shooting mechanic. Outside of this though, I found the golf to be quite fun. The twists on traditional golf just make it more satisfying in my opinion. It was fun playing golf in an abandoned wasteland using objects to help get the ball to the hole. When you are able to make an impressive shot from a long distance or by bouncing the ball off of objects, it is really satisfying. If the game’s premise interests you at all, I think you will really enjoy playing Golf Club Wasteland.

As for Golf Club Wasteland’s difficulty, it somewhat depends. The game has three different modes. The game has a story mode where it doesn’t matter how many strokes it takes to get the ball into the hole. There is a challenge mode that requires you to get at least par on a hole to progress to the next hole. Finally there is Iron Mode which gives you little room to make mistakes. Obviously story mode is not difficult at all as outside of taking more time to finish a hole, it doesn’t matter how many shots its takes to get your ball into the hole. I haven’t tried out Iron Mode yet so I can’t comment on that. As for the challenge mode which is what I played the game on, it kind of depends. I would say that a majority of the holes are pretty easy where I made par on either my first or second attempt. There were a few holes that were pretty difficult though. These were mostly due to having to get the ball to land on pretty small platforms. Generally I thought the game’s difficulty was fair. The game was hard enough where I felt a sense of accomplishment for beating par, but it was not so difficult where it became frustrating.

The wasteland plays a larger role than just a backdrop to play golf on. Golf games are rarely if ever known for their stories, but Golf Club Wasteland actually put quite a bit of time into its story. I am not going to get into the story too much to avoid spoilers, but I actually thought it was quite a bit deeper than I thought it would be. The story is basically told through three points of view. The observations of the character you play as, a radio station broadcasting to the humans on Mars that want a reminder of Earth, and an unknown third entity. This is an interesting way to tell the backstory of what lead to the end of Earth as we know it and humanities retreat and life on Mars. I thought the story was quite compelling even if it is a little predictable. The story may not be for everyone, but it is a lot more than you would typical expect from a golf game.

On top of the story the game’s whole atmosphere is really well done. The game uses a 2D art style which looks really nice. The game does a really good job creating a wasteland that feels like humanity left the planet quickly. While the atmosphere is kind of depressing (how could an abandoned Earth not be), it can also be quite colorful at times and interesting to look at. Anyone who has an interest in the post apocalypse like style should really like it. On top of this the game’s audio is great as well. Most of the game’s audio comes from a radio station that does a good job switching between good songs as well as testimonials from humans that survived the trip to Mars. This does a good job mixing story elements with entertaining music. In all the game does a really good job creating a relaxing atmosphere even if you are golfing in a world that has been basically destroyed.

Golf Club Wasteland’s length is basically going to depend on how you approach it. As I mentioned earlier the game features I believe 35 holes. These are not your typical golf course holes though as many have pars at or above ten. Without having to restart a hole due to too high of a score, I would guess that most holes will take a couple of minutes to complete. If you don’t really care about your score or completing the achievements, I think you could beat the game within a couple hours. If you play on a higher difficulty though and try to get all of the achievements, I think you could add a couple hours to that total. The game is not particularly long, but the holes are fun enough that I could see coming back to the game another time to play through the course again.

I began this review by saying that I don’t typically play a lot of golf games. Part of this is because most golf games seem too similar to one another. I really enjoyed Golf Club Wasteland and think it is one of the best games that I have played from the genre in quite some time because it does something different. In a way the game feels like a combination of regular golf and mini-golf. Having holes built around a decaying world is really interesting as you use the environment itself to help you get the ball to the holes. In a way this kind of feels like a puzzle game and a nice change of pace from your typical golf game. On top of this the game actually puts a lot into the story and atmosphere for a golf game. The game does a really good job creating a relaxing atmosphere while also telling a compelling story about the end of the world.

My recommendation for Golf Club Wasteland is actually quite simple. If you don’t like golf or don’t care about the theme/atmosphere, Golf Club Wasteland probably won’t be for you. If you want an interesting twist on your typical golf game though, I think you will really enjoy the game and should consider picking it up.