Ever since Scrabble came onto the scene in 1948 there have been a surprising amount of word games created to capitalize on the success of Scrabble. I have always found the success of the word genre to be kind of surprising since few people care about vocabulary and spelling which are the main mechanics in word games. The genre has become quite popular over the years though and a lot of people have tried to tweak the formula to create an interesting word game experience. Today’s game, Jumbulaya, is one of those games that have tried to add something new to the Scrabble formula. In some ways Jumbulaya succeeds at adding some unique mechanics to Scrabble but at the same time never really distinguishes itself.

Shuffle the tiles and draw 27 tiles to place face up on the yellow spots on the gameboard. Each player chooses a color and takes the markers and tile rack of that color. Each player takes five tiles randomly from the tile bag and places them on their tile rack. Each player will then draw one tile. Players compare their tiles and the player who drew the tile closest to A gets to go first. 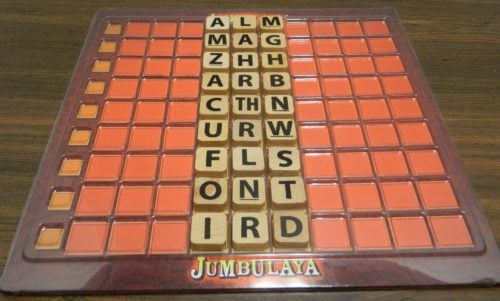 On a player’s turn they try to form a new word on one of the horizontal lines on the gameboard. If a player is able to form a new word they place one of their markers in the far left column of the row where they formed a new word. If there was already a marker on this row, the player replaces the marker with their own marker.

To form a word players can use three different types of actions. The player can use any combination of the three actions to form a new word (they can add, trade, and shuffle at the same time). When forming a word all of the player’s actions can only be applied to the line that the new word is being created on. The word must be different than the word that was previously on the line though.

The first action that a player can perform is a shuffle. Players can rearrange any or all of the tiles on a line in order to form a new word. 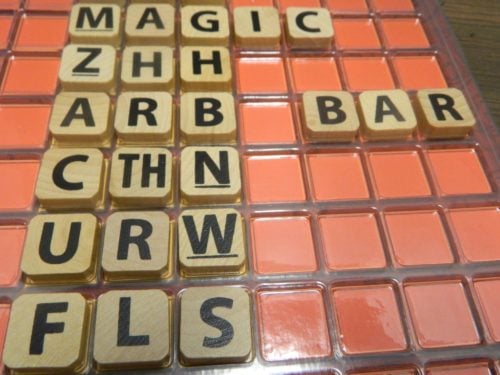 This player can create a word in this row by rearranging the tiles in “ARB” into “BAR”. 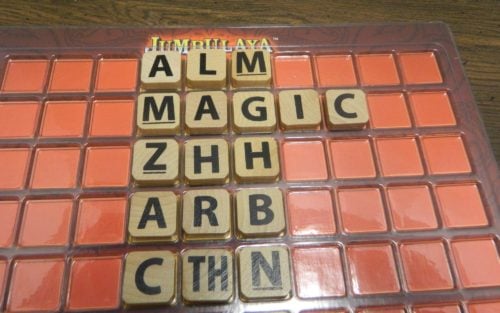 This player has added the letters “IC” in order to make the word “Magic”.

The third action is to trade tiles. Players can trade one or two of the tiles from their tile rack for the same number of tiles from one of the rows on the board. 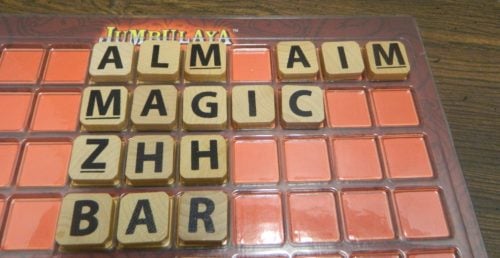 This player can change “ALM” into “AIM” by replacing the L with an I.

If a player would like to add and trade tiles on the same turn they will only be able to add one tile and trade one tile since a player is only allowed to place two of the tiles from their tile rack onto the gameboard on a turn.

When forming words the following words cannot be used:

If a player thinks that a word played to the board is not a real word it can be challenged by looking it up in a dictionary. If the word is an actual word, the challenger loses a turn. If the word is not a valid word, the row is returned to what it was before it was changed and the current player’s turn is over.

If a player can’t think of a new word for their turn or they want new tiles, a player can exchange any number of tiles from their tile rack for new tiles. This counts as the player’s turn though.

Once all nine rows have been claimed by any player and at least one of the words on the board is at least seven tiles long, the game enters the Jumbulaya phase. In the Jumbulaya phase the players can begin looking for a Jumbulaya. A Jumbulaya is a word that is at least seven tiles long and uses one tile from each row to form a word. When forming a Jumbulaya players can use tiles from any position in a row. The player can skip rows but the letters used in the word must be used in the order they appear on the board from the top to the bottom. 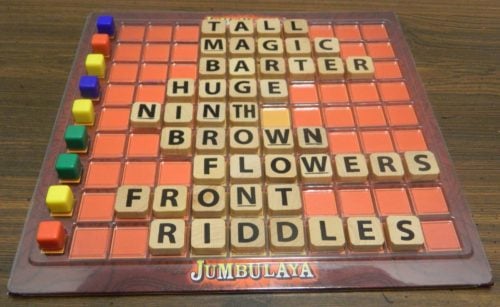 All of the conditions have been met for a player to call out a Jumbulaya. One possible Jumbulaya is “targets” which uses one letter from every row skipping the fifth and sixth rows.

A game of Jumbulaya can end in one of three ways:

Next the player who found the Jumbulaya (if one was found) will score points based on the length of it.

Finally players will score one point for every two letter tile used in a row they control or a Jumbulaya.

The player who has scored the most points wins the game.

Not being a huge fan of word games, I didn’t really know what to think about Jumbulaya. Jumbulaya shares a lot in common with most word games. You basically grab and play tiles to a board like in Scrabble. Jumbulaya does introduce a few unique mechanics though which do succeed in slightly tweaking the word game formula.

The first new mechanic that Jumbulaya adds to the word game genre is the idea of being able to rearrange the tiles on the board. In Scrabble the tiles are locked in place as soon as they are placed but that is not the case in Jumbulaya. Players are able to rearrange all of the tiles in one row during their turn. This is an interesting idea since it adds a surprising amount of options to the game. It is actually surprising how many ways you can change words just by rearranging the letters. If you are dealt bad tiles you could rearrange the tiles on the gameboard to form a word without using any of your tiles.

The other unique mechanic in Jumbulaya is the fact that you can trade tiles from the board with tiles in your tile rack. This is an interesting mechanic as it gives you options for changing one of the rows. When you combine this with the shuffling mechanic you have a lot of options in creating new words just by changing one or two letters. There is also the possibility of getting rid of a tile that you don’t really want and replacing it with a tile that you actually want.

While I don’t think the two new mechanics drastically change the game, they do present some interesting side effects for the game. Outside of getting the Jumbulaya at the end of the game, the other main mechanic in the game is trying to control the board. Unlike Scrabble where you are just playing tiles to score points, in Jumbulaya you need to try and control the most rows at the end of the game. This means that you are going to be actively trying to steal rows from the other players. Jumbulaya can be surprisingly cutthroat since a player could change, add or rearrange a few letters and steal a row from another player. With short words in particular it is really easy to steal words.

This is why you need to try and create as long of words as you can. While you can only add two tiles on your turn to a row, it is best to try and make the word you create as long as possible. Since letters can only be added, traded and rearranged on the board, the more letters that there are to work with the harder it is to change a word into a new word. While it would be really easy to claim a bunch of short words, the short words provide little protection. This creates an interesting dynamic where you want to take control of more rows while also increasing the length of your own words in order to better protect them.

One problem that I have always had with the word game genre is that it tends to have a problem with analysis paralysis. If players are given unlimited amounts of time to choose their word for a round, the game can drag on for far too long. Players that always have to try and maximize their turns could take forever in word games if they aren’t given some limit on how much time they can take for a round. Due to being able to add, trade and shuffle tiles in Jumbulaya there are many potential options which could take players forever to go through. While Jumbulaya does some good things to combat analysis paralysis, it also makes the problem worse in other ways.

Lets start with where I think Jumbulaya gets rid of some of the analysis paralysis problems. While I thought it was curious that the game only allows you to add/trade up to two tiles on your turn, I think it was added in order to reduce the analysis paralysis issue. While it is annoying not being able to use as many tiles as you want on a turn, I can’t imagine how bad the analysis paralysis problem could be if you could add/change up to five tiles on your turn. If there wasn’t a limit you could basically turn a word into any other word. This would have created an options overload for players that always need to try to find the best option.

Although limiting the number of tiles you can use on a turn somewhat reduces the analysis paralysis problem, the issue is far from eliminated in Jumbulaya. Being able to add and trade tiles with the tiles in your tile rack along with being able to rearrange tiles on the board leads to so many potential options in the game. Especially later in the game there are so many different possibilities using those three actions that it can be truly overwhelming. To keep the game from being dragged down you really need to implement some sort of house rule that limits how much time a player can spend on their turn thinking of words. Otherwise the game could quickly run into issues as players have to sit around waiting for a player to figure out what they want to do.

Other than the analysis paralysis problem, I think the biggest problem that I had with Jumbulaya is that it is just a boring board game. While it does make a few tweaks to the formula, at its’ most basic level the game is no different than any other word game. You draw and play tiles just like in games like Scrabble. If you are a big fan of word games you will probably appreciate the tweaks to the formula but there just isn’t enough to the game to really keep it interesting to people who don’t love word games. Since I wouldn’t classify myself as a huge fan of the genre (I don’t hate it either), I have to admit that I was a little bored by Jumbulaya. The game just felt like every other word game that I have played in the past. Jumbulaya doesn’t really do anything wrong but I just didn’t find it to be all that interesting either.

If you are not a huge fan of word games, I don’t think there is enough originality in Jumbulaya to really make it any better than any other word game. If you already have a lot of word games, Jumbulaya is probably not unique enough to warrant a purchase. If you love word games though and think the game’s concept is interesting it may be worth picking up Jumbulaya if you can get a good deal on it.

If you would like to purchase Jumbulaya you can find it online: Amazon