Two of the oldest board games that are still played to this day are probably Bingo and Dominoes. Everyone has probably played both games at some point in their lives. With both games being in the public domain at this point, it is not surprising that they have had a lot of games based on them. I had never really encountered a game before that combined the two games though. Not being a huge fan of either game, I didn’t really have high expectations for Domingo. After playing Domingo my opinion hasn’t changed.

How to Play Domingo

Each player takes a tray and puts it in front of them with the words Domingo at the top. All of the tiles are placed face down in a draw pile. One player is chosen to be the caller.

At the same time every player takes one of the face down tiles. Each player chooses where on their grid that they would like to place the tile. Once everyone has placed a tile everyone takes another tile and this process continues for the rest of the game. 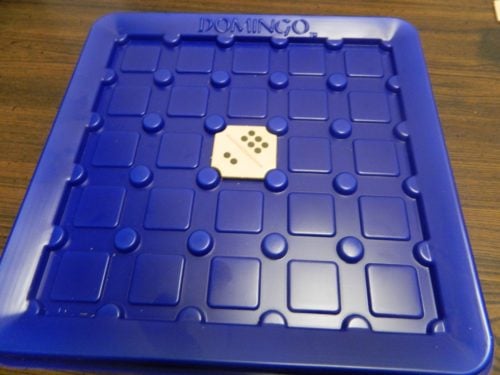 When playing tiles players try to connect two edges that have the same number of dots on them. 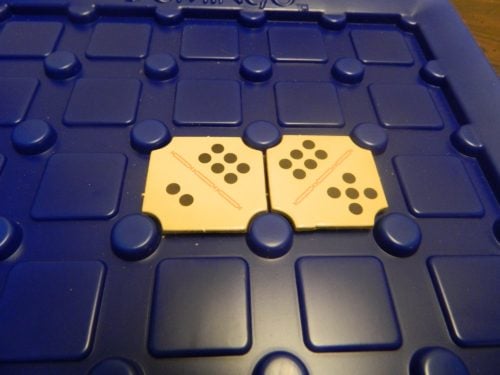 Any tiles placed next to one another that don’t have matching edges, can’t be used to win the game. 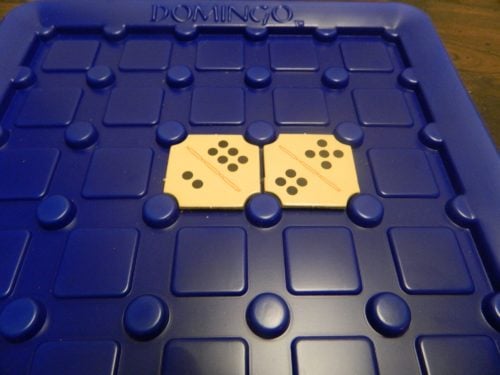 These two tiles do not match so you cannot use these tiles to create a winning combination.

The round ends when one player has placed five tiles in a line vertically or horizontally where each subsequent tile matches the edge that was played next to it. The player calls out Domingo and if the line is confirmed the player wins the round. If two players call Domingo at the same time, the player who used more dots for their Domingo breaks the tie. All tiles used in the round are returned to the face down pile. The instructions recommend playing five rounds before determining the winner of the game. 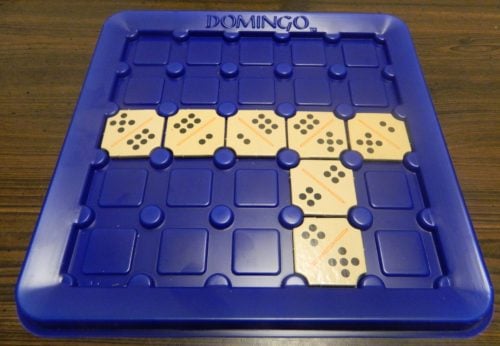 This player has won the round by connecting five tiles in a line horizontally.

As far as determining the final winner, players can either keep track of how many rounds they won of they can earn points based on what place they ended up in. If the players chose to use points the first player to get a Domingo gets 50 points, the second 25 points and the third 10 points. Players also score points based on how many tiles they needed to use to get their Domingo:

My Thoughts on Domingo

If the game’s name didn’t already make it pretty obvious, Domingo is basically a combination of Bingo and Dominoes. First Dominoes comes into play with the tiles themselves. Each tile has two sides with a number of dots on both sides of the tile. Just like with Dominoes a player tries to connect tiles that have matching numbers. The Bingo element comes into play as players are trying to get five in a row either vertically or horizontally.

Since Domingo combines Dominoes and Bingo, both very simple games in their own ways, it is not a surprise that the game is really easy to play. While the game has a recommended age of 7+ I think younger children would be able to understand the game. Basically all you do in Domingo is grab a tile and place it in your grid. Since that is basically the only rule in Domingo it only takes around a minute to explain how to play the game.

The game is also extremely quick to play. Most rounds of Domingo are probably going to last 3-5 minutes as it usually only takes players 8-10 tiles to win a game. If you play the recommended five rounds, most games of Domingo are going to last around 15-20 minutes. Domingo is one of those type of games that you can play as many rounds as you want though. If you don’t have much time you can play less rounds and if you want a longer game you can play more rounds.

While I like that the game is easy to learn and quick to play, its’ simplicity does come at a cost. The biggest problem with Domingo is that there is next to no strategy in the game. Basically you draw a tile and play a tile. Since you have no control over what tiles you draw, in order to succeed in the game you need to hope that you draw well. While Domingo doesn’t rely entirely on luck, the little strategy that is in the game is usually quite obvious. If you draw a tile that has a side that matches a tile already on your gameboard, you might as well play it next to the matching tile. If the tile doesn’t match any other tile on your gameboard, you should place the tile in a space that doesn’t interfere with any lines that you are currently building up. Since the strategy is so obvious, outside of a player making a mistake the strategy doesn’t really impact the game.

Outside of there basically being no strategy, the other significant problem that I have with Domingo is that it is just so boring. There is nothing wrong with the game’s mechanics but they are just really boring. I wouldn’t call myself a huge fan of Dominoes or Bingo but I think Domingo is actually worse than both games by themselves. With there being so few decisions in the game, you basically just draw and play tiles. Maybe it is just me but that just isn’t very exciting. The strategy is so simple that it feels like the game just plays itself. I find games that play themselves to be pretty dull. If you want a game where you can pretty much turn off your brain, you may have a little fun with Domingo but there are much better games out there.

Finally before wrapping up I would like to quickly talk about Domingo’s components. Basically the components remind me a lot of the game as a whole, solid but boring. The plastic game trays and cardboard tiles are pretty sturdy. The components are so dull though. The components serve their purpose but are far from something that you will look at and admire.

Should You Buy Domingo?

I can’t call myself a fan of Domingo. It is a perfectly playable game that really is not broken in any way. The problem is that it is just not a fun game. The game relies heavily on randomly drawing tiles since you have to place every tile that you draw. Draw well and you likely will win or draw poorly and you will lose. While the game has a little strategy it is usually so obvious that it really doesn’t come into play unless a player makes a mistake. With the high reliance on luck and obvious strategy, Domingo is just a really boring game.

Unless you really want a game that you can just sit back and play with little to no thought, Domingo is not going to be for you. If you like Dominoes and Bingo and don’t care that the game is a little dull you could maybe have a little fun with Domingo. I would only consider picking it up if you can find it for really cheap though.

If you would like to purchase Domingo you can find it online: Buy Domingo on Amazon