Ever since I was a kid I have always been a sucker for quirky children’s dexterity games. While the games are usually made for children, there are some that are actually pretty fun for adults as well. I have always appreciated a game that does something different even if the game was originally meant for younger children. I can’t say that I had high expectations for Jolly Octopus though. While the premise of trying to grab crabs while avoiding the octopus’ arms could have made for a fun dexterity game, I thought the game was mostly going to be for children and would be too simple for adults.  Jolly Octopus should really appeal to young children and is surprisingly more difficult than I expected, but ultimately becomes boring pretty quickly.

How to Play Jolly Octopus 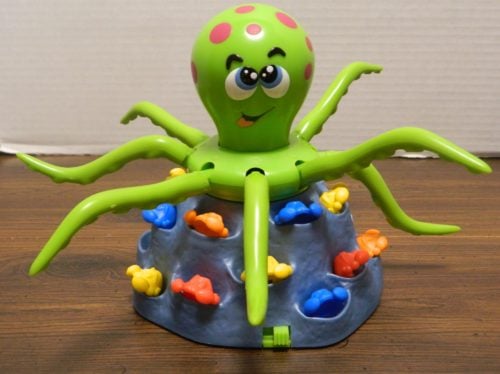 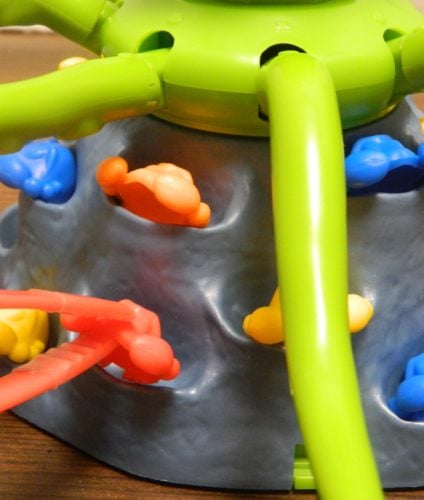 The current player is trying to grab one of the crabs with the tongs.

If while trying to grab a crab you end up touching the octopus’ hands, Jolly will start giggling. If you grabbed a crab or knocked any off their perch they will be returned to the spot that they were on.

Whether or not you grabbed a crab, play passes to the next player clockwise.

The first player to collect all of their crabs wins the game. 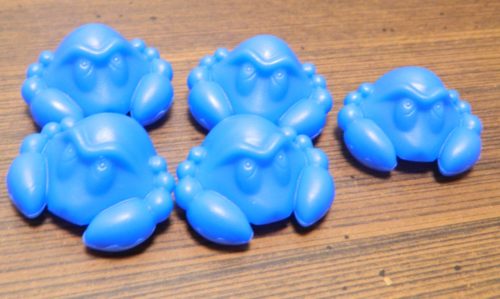 This player has acquired all of their crabs so they have won the game.

My Thoughts on Jolly Octopus

The basic premise behind Jolly Octopus is to try and grab the crabs on the rocks below the octopus. To accomplish this you are given a small pair of tweezers. Players take turns trying to grab one of their crabs with the tweezers without touching one of the octopus’ arms. The catch is that the octopus is swinging its arms around making the task much harder. If you grab the crab without touching one of its arms, the player gets to keep the crab. If the player touches one of the octopus’ arms it will start giggling meaning that you have to put back the crab that you were attempting to grab. The first player to acquire all of their crabs will win the game.

Another positive is that Jolly Octopus is simple enough where you can start playing it without much of a rules explanation. The game can taught to new players within a minute or two. A parent might have to first explain how to play the game, but after an initial explanation I think younger children won’t have any troubles playing the game themselves. This simplicity leads to the game playing pretty quickly. Unless players really struggle to grab the crabs I see most games ending in around five minutes. This shorter length should keep younger children interested throughout instead of them getting tired of the game halfway through the game.

While I think Jolly Octopus will work well for younger children and their parents, what about adults without younger children? With a game made for young children you would think that the game would be really easy and boring for adults. I have to say that I was a little surprised by Jolly Octopus. For a game made for young children, the game was quite a bit more challenging than I was expecting. I applaud the game for including two different difficulty settings. This allows the players to increase the difficulty once children have gotten good at the game. It can also make the game a little more challenging for adults. The game requires a delicate and quick touch in order to grab a crab without touching one of the octopus’ arms. While I wouldn’t say that the game is that challenging, adults can fail from time to time.

Because the game was more challenging than I was expecting, I have to say that I had some fun with the game. I have always been kind of a sucker for these types of quirkier children’s dexterity games. It is kind of fun trying to quickly grab a crab without hitting one of the arms. If you have never liked these type of games, you won’t like Jolly Octopus. If you like the occasional children’s dexterity game though you can have some fun with Jolly Octopus.

The problem is that the game becomes repetitive pretty quickly. After one game I was starting to tire of the game. As there is only one mechanic in the game, it becomes repetitive quickly. After you have successfully grabbed a couple crabs there isn’t much else to experience in the game. This feeling isn’t helped by the game’s sound effects. While children will likely love them, they become repetitive pretty quickly for adults. The octopus’ giggle is just so strange that it gets annoying after a while. I think young children will be entertained by the game for quite a bit longer than adults. Even younger children will probably only want to play Jolly Octopus for 10-20 minutes and then put it away for another day.

In addition to getting repetitive pretty quickly, the other issue I had with the game is that it is way too easy to knock the crabs off the rocks. Sometimes we would just drop the crabs and other times we would accidentally knock them off. The game’s rules force you to give the crabs you knock off to one of the other players. We thought it would be better if we returned the crabs to the rocks, and tried to grab them on a future turn though. This added a little more challenge to the game. The problem is that it was kind of a hassle to return the crabs to the rocks what with the octopus’ arms constantly moving.

While Jolly Octopus is kind of boring, I will say that the components are pretty good. The components are cute which I think will really attract young children to the game. The electronic component also works quite well. I appreciate that it has two different speeds allowing for different difficulty levels. The components are quite solid where they should last through extended use. The only real complaint that I have with the components is that I think the rocks could have been designed differently. How the rocks are designed makes it sometimes hard to grab the crabs without knocking them off the rocks.

Should You Buy Jolly Octopus?

Jolly Octopus is basically what you would expect it to be. The game is a pretty typical children’s dexterity game where you grab crabs with a tweezers. I think the cute components and sound effects will really attract young children to the game. The gameplay is also really simple and kind of fun. For a game meant for young children I was a little surprised by Jolly Octopus. Adults can have some fun with the game, and it is surprisingly more difficult than you would expect. Unfortunately the game becomes repetitive pretty quickly. I even see younger children only wanting to play the game for 10-20 minutes before putting it away for another day. At the end of the day I see Jolly Octopus being a good game for young children, but not really for anyone else. This is reflected in the game’s final rating.

If you would like to purchase Jolly Octopus you can find it online: Amazon