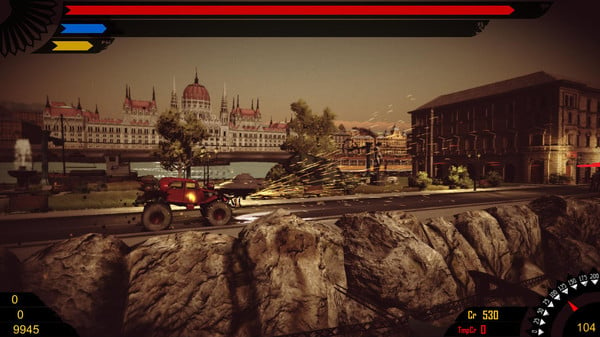 We at Geeky Hobbies would like to thank Invoker Studios for the review copy of Ironkraft – Road to Hell used for this review. Other than receiving a free copy of the game to preview, we at Geeky Hobbies received no other compensation for this preview. Receiving the preview copy for free had no impact on the content of this preview. Since the game is currently in Early Access, there is no score since it is unfair to grade a game while it is still in development.

In Ironkraft Road to Hell you play as Chris R. Petrol. In an alternate timeline the Nazis have won World War 2 due to some “help” from aliens. The world is now a post-apocalyptic wasteland where people live in small settlements. You work as a trader who collects items from the wasteland to trade from city to city for goods and money to upgrade your vehicle.

For those of you familiar with the Trials series of motorcycle games, Ironkraft kind of controls like the motorcycles in that game but with a more arcade like touch. You operate a vehicle in a 2.5D environment. You can control left and right movement and you can flip the car in order to head in the other direction. While traveling you can also change the tilt of your car (up and down) in order to help you avoid obstacles and make particularly challenging jumps.

That mechanic is combined with a 2d shooter/brawler. The roads are not safe as you will encounter many zombie Nazis and alien ships that block your way between cities. There are two main ways to deal with these enemies. First you can equip weapons to the front and back of your vehicle which are used to shoot enemies. The shooting mechanics at this point are pretty simplistic since you just shoot straight and can only aim by tilting your car. You can also put your weapons on auto-fire which will fire whenever you are within range of the enemies. The game also has some brawler mechanics where you can hit enemies with your car in order to cause damage.

At this point most of the main mechanics seem to be in place and they work fine for the most point. While I wish the cars would move a little quicker, they control fine enough. At this stage you pretty much need to build a slow tank with a lot of health or a faster car without much health. The faster car would probably be more fun to control but you seem to die too easily if you don’t add a bunch of equipment that adds armor to your car.

The problem with having a heavy armor car is that it is kind of boring to drive. It moves so slow that if you have auto-fire on you will kill everything before you can even come close to approaching it. At this point driving a heavy armor vehicle mostly involves just holding down the button to move right.

At this point the game doesn’t have a lot to do in it which makes the game kind of repetitive. While I haven’t played the game a lot, at this stage you mostly just drive and shoot. Hopefully the game either adds more platforming/jumps into the game to break up some of the straight driving and shooting or adds some additional mechanics.

Being an early access game it is not surprising that the game has some bugs. While kind of annoying bugs in early access games are to be expected and usually get fixed quickly so they shouldn’t be a reason not to purchase a game. Some of the bugs I encountered include:

Should You Purchase Ironkraft Road to Hell?

At this point Ironkraft Road to Hell is more interesting for what it could become than what it is at this point in time. While the game is functional and works, it is kind of repetitive and pretty rough around the edges at this time. That is to be expected though since it is early in the Early Access process. The concept behind the game is interesting though and I think it could develop into a good game.