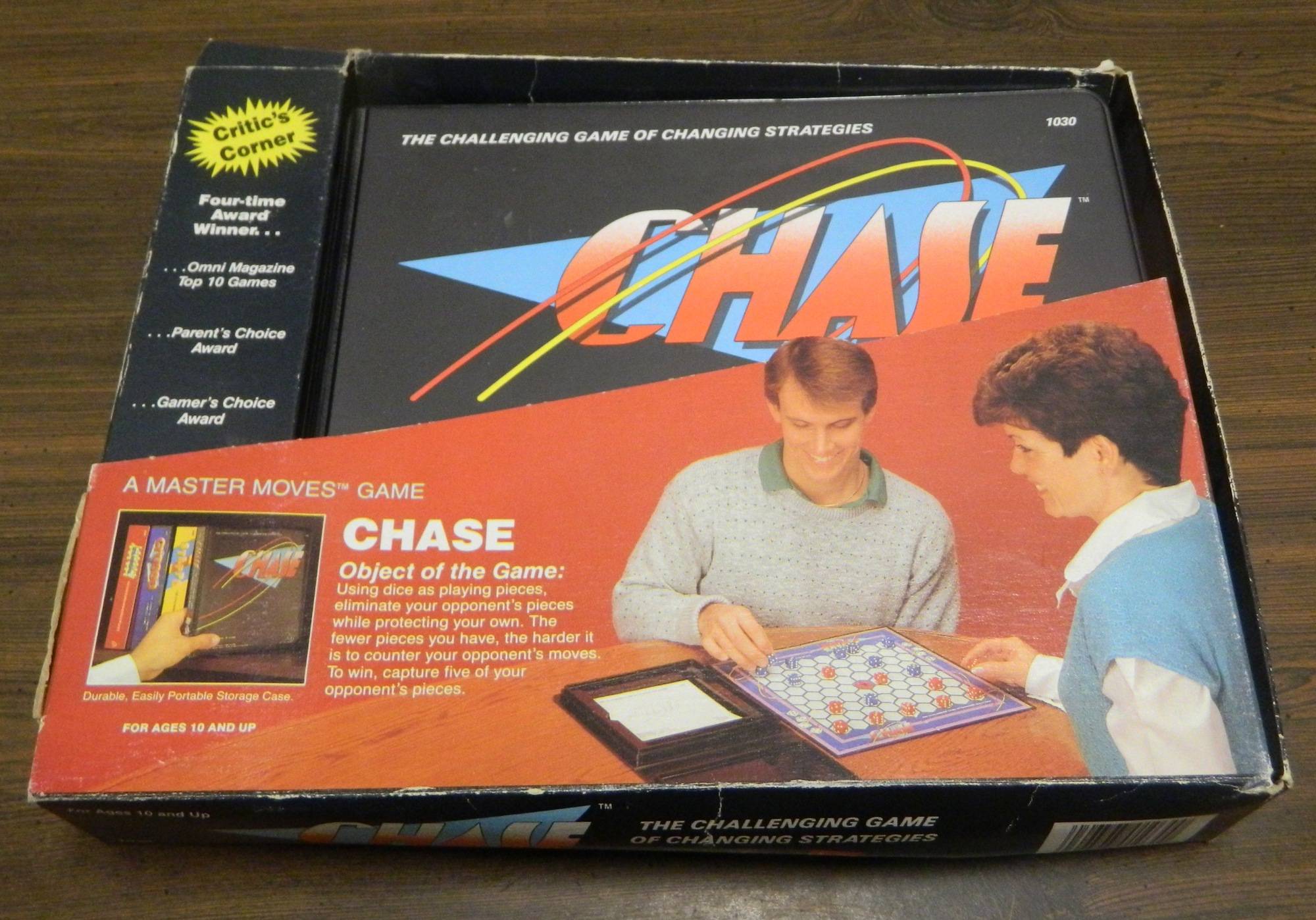 When most people think of the company TSR they probably think of Dungeons and Dragons as they were the original publishers of the series before the company was bought by Wizards of the Coast. Other than Dungeons and Dragons the company was known for creating a lot of fantasy RPGs and war games. It kind of surprised me to find out that TSR at one point had a line of abstract strategy games which brings me to today’s game Chase. Chase is basically what you would get if you took Chess/Checkers and used dice to determine how many spaces each piece could be moved. While Chase has a good foundation for an abstract strategy game, it just feels like something is missing from the game.

How to Play Chase On a player’s turn they have two options:

Once a player has taken one of the two options, play passes to the other player. The game will end if the players repeat the same moves three times in a row or one player only has four dice left on the gameboard.

On most turns a player is going to move one of their dice. Dice must be moved in a straight line in any direction. The die has to be moved the exact number of spaces indicated on the top face of the die. When moving a die you cannot move it through a space occupied by a dice (your own or the other player’s) and you cannot move through the space in the middle.

While moving a die special actions occur if the die lands on a space occupied by another die or the center space. The action that occurs depends on the space that the die lands on:

When a player moves one of their dice onto the same space as one of their opponent’s dice, they capture that die. The captured die is removed from the board.

If a piece moves onto the center space (chamber space) by exact count it will be split into two. This will not occur if the die landing on the space is valued at one or if the player doesn’t have any dice that aren’t already on the board. In either case the die will leave the chamber space to the left side of the arrow (see below). Pieces also cannot be bumped into the chamber space.

If one of the split dice land on a space occupied by a die of either player follow the appropriate capture/bump rules.

A game of Chase will end in one of two ways. If both players repeat the same moves three turns in a row the game ends in a draw. Otherwise if one player only has four dice remaining on the board, the other player wins the game.

My Thoughts on Chase

When I first looked at Chase I didn’t really know what to think of the game. I thought the game was going to play a lot like Chess/Checkers as your goal is to move pieces around the board and try to capture the other player’s pieces. The one thing that intrigued me about the game is that each piece can move a different number of spaces based on the top face. This intrigued me because it gives players a lot of different options for movement.

As the game looked a lot like a Checkers/Chess variant I assumed that the game would be quite easy to play. For the most part my assumption was correct. The basic mechanics of the game are pretty simple. Basically you just have to move your dice in a straight line the number of spaces indicated by the top face of the die. Other than that the game has some special rules which come into play when certain things occur. Some of these mechanics take a little while to adjust to but they are pretty straightforward. While the game has a recommended age of 10+ I could see kids a couple years younger probably being able to play the game since it is simple enough that most people should be able to pick it up pretty quickly.

Despite the game being pretty simple, there is quite a bit more strategy to the game than you would expect. Before playing the game I was expecting the game to be light to moderate on the strategy spectrum. After playing the game I would classify it as a moderately strategic game. Chase literally has no luck involved outside of being able to guess what your opponent is going to do. Despite the game using dice, there is no dice rolling outside of deciding who starts the game. You will win or lose Chase based on your decisions and not because of luck or other factors outside of your control.

The reason that I think Chase has more strategy than you would initially think is the fact that the game truly gives you a lot of options for every turn. While this leads to problems which I will address shortly, these options give you a lot of control over your fate. Between being able to move in six directions, bumping pieces, wrapping around to the other side of the board and even using the ricochet mechanics there aren’t many limits on what you can do on any given turn. With so many different options it is easy to miss some potential moves which allows you to set traps for the other players.

With so many different options for a given turn, Chase is one of those games that you need to think several moves in advance to optimize your strategy. While you can enjoy the game making your moves on the fly, you will probably lose to a player that plans their moves out in advance. With so many different options it is pretty easy to trap another player into losing a die if you do a good job planning ahead. I see Chase being one of those games that is easy to play but hard to master. While an experienced and beginner player can both have fun playing the game, I don’t see the experienced player losing often to a player that is new to the game. The more you play the game the more knowledge you will have on how to tackle different situations which will give you a pretty big advantage in the game.

One unexpected side effect that I encountered in the game is the fact that Chase feels like a game of attrition. If one player is considerably better at the game I could see them winning by several pieces but in most cases I see both players regularly trading off capturing each other’s dice. For example when one piece is captured the value of that die is added to another die. In many situations the player can then use that value with another die to capture one of the other player’s dice. This can go back and forth several times. I see most games ending with the winner only having one or two more dice than the other player.

I think the biggest problem with Chase is the fact that the game actually gives you too many options on a given turn. I love games that give you options but there is a point when it becomes too much. Each dice has a possibility of six different movements on every turn. Add in the fact that a player could have up to ten dice on the board at the same time. This means that a player could theoretically have up to sixty possible moves to analyze on a given turn. There will be quite a few times where there is an obvious move but usually players will have to decide between 10-20 different moves each turn.

The problem with so many options is the fact that for players that always have to maximize their moves, this can lead to some serious analysis paralysis where you are stuck waiting around for the other player to make their move. While you could think through potential moves while waiting, you will still have to wait for the other player to finish their turn before you can see what move is truly going to be the best for you. Now if the players aren’t insistent on always maximizing their moves this isn’t as big of a problem. As I can tell from experience though, if you play with two players that always have to maximize their moves the game can become boring pretty quickly.

The fact that the game is quite boring is probably the second biggest problem that I had with Chase. I just didn’t find Chase to be that fun to play. I have never been a huge fan of abstract games. While I don’t place as much emphasis on theme as other people, if your game has no theme (which perfectly describes Chase) your gameplay needs to be really good. The problem with Chase’s gameplay is that I just didn’t find it to be that entertaining. The game just feels like an exercise of moving pieces around the board while occasionally capturing some pieces. While there is strategy to the game, it just wasn’t that entertaining in my opinion.

Should You Buy Chase?

I find Chase to be an interesting game because it has a lot going for it. The game finds a way to get a lot of strategy out of some pretty simple mechanics. Players have a lot of control over their own fates as there is next to no luck in the game. The player that makes the best strategic moves is going to win the game. Despite all of these positives Chase just didn’t really work for me. First the game has way too many opportunities for analysis paralysis since if the players truly want to maximize their moves they have many options to analyze every single turn. Second I just didn’t find Chase to be all that engaging. With no theme the game needed great gameplay which it just doesn’t have. The gameplay is fine but it just doesn’t do enough to keep the game entertaining. Finally there is the fact that the components are far from special as you could easily make your own version of the game.

Basically my recommendation for the game comes down to how much you like abstract games. If you don’t care that much for the genre, Chase is probably not going to be for you unless the game’s concept really appeals to you. If you really like abstract games though I think you will enjoy Chase. If you can find a good deal on the game I would say it would be worth picking up but otherwise it wouldn’t be that hard to make your own version of the game.

If you would like to purchase Chase you can find it online: Amazon