One of the oldest “playground” games is the game Telephone. For those of you who have never played Telephone before, it is a simple game where one player comes up with a story/sentence. They whisper this story into another player’s ear who then whispers it into another player’s ear until everyone has heard it once. The last player then has to try to repeat the entire story they heard. The players then usually laugh at how the story become distorted after being retold over and over again. Since there really is no scoring or winning in Telephone it doesn’t surprise me that there have been attempts in the past to find ways to tweak it in order to make it feel like more of a game. One of those games is today’s game Humor Rumor. Humor Rumor adds some interesting ideas to the game Telephone but ends up as a game that will just make its players look like fools.

How to Play Humor Rumor

Humor Rumor is played in rounds. The players will play as many rounds as there are players. Each player will start one of the rounds and each player will have one round where they don’t receive a card.

To begin each round all but one of the players is dealt a card. Each player looks at their card to find the word that they will use for the round. 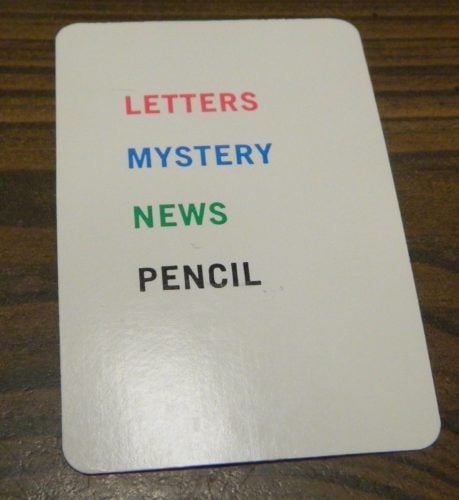 Depending on the color that was chosen, this player will have to either add to the rumor using the word letters, mystery, news or pencil. 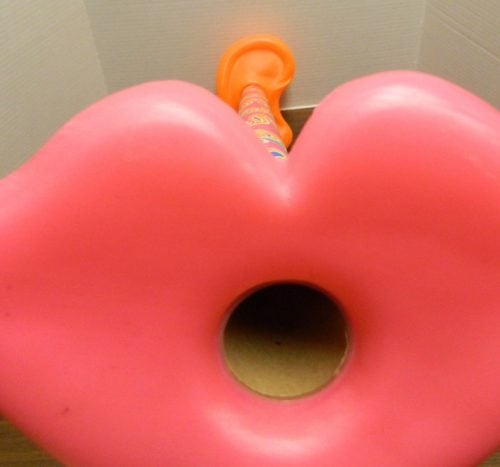 A player will tell the story/sentence through the mouth side to the player who will be listening on the ear end.

The second player then takes the tube and places it between them and the player on their left. They begin by whispering the first story into the tube.  After telling the first story they will add to that story using their own word. This process continues until the last player tells the entire story to the player who didn’t get a card this round.

The next round is then started with the next player clockwise not receiving a card.

The game ends when each player has played a round where they didn’t receive a card. Players then count the cards they have in front of them. The player with the most cards at the end of the game wins.

My Thoughts on Humor Rumor

If after reading the “How to Play” section you had the feeling that Humor Rumor sounded really familiar you wouldn’t be alone. As soon as I read the rules my mind immediately went to the old children’s game “Telephone”. I bring this up because Humor Rumor is basically the exact same game with a couple slight tweaks. The main differences include the ridiculous contraption you use to tell the stories and the game tries to actually add some actual gameplay with a scoring system. As the game is mostly just Telephone with some tweaks, if you have ever played Telephone before you should already have a good idea of whether you will enjoy the game. While I don’t ever remember playing Telephone as a kid, we did look at Cranium Scribblish a while back which is basically Telephone mixed with Pictionary. While I enjoyed Cranium Scribblish I can’t say the same about Humor Rumor.

Lets start with the scoring mechanics in the game. A lot of people probably wouldn’t even consider Telephone to be a game as there is no way to judge how well the players have done and there is no ultimate winner. The enjoyment comes from laughing at how the story changes between the players retelling of the story. Humor Rumor tries to fix this by adding in more traditional game mechanics. In the normal Telephone there is only one story that only changes when players make mistakes retelling it. In Humor Rumor each player repeats the story they heard but also have to add onto the end. Players want to accurately tell the story they hear to prevent the previous players from scoring while making their section of the story confusing so the next player(s) will mess it up.

While the game has the basic guideline of only adding a five to ten word sentence if there are a lot of players, I would recommend adding more house rules to this part of the game. First I would enforce only adding five to ten words even if there aren’t a lot of players. If there is no limit on how long your part of the story can be there is no reason why a player shouldn’t try to ramble on for as long as possible. The longer the story is the more likely it is to be messed up at some point. This increases the odds that players will forget your word which will score you a point.

The other house rule that I would highly recommend implementing is a rule where you can only add things to the story that actually make sense. Without this rule players could just randomly list off a bunch of words which will make it next to impossible to remember the entire story when it gets to the last player. I would suggest forcing players to add something that makes sense with the rest of the story that was told to the player since it will add more challenge to coming up with your story while also making it easier to remember.

After the entire story is told the game moves onto scoring. Maybe it is just me but the scoring mechanic feels like it was pasted on in order to make Humor Rumor feel like more of a traditional game. While I don’t know how much more you could have done with the scoring, it just doesn’t really feel fair in my opinion. I can see that the game was trying to reward players for coming up with a confusing story that tricks the other players. Whether the other players remember your portion of the story seems to be pretty random though. The first and last player in the chain have a disadvantage as the last player is more likely to remember the beginning and end of the story. Basically Humor Rumor ends up rewarding players due to another player in the chain messing up. That just doesn’t seem really fair in my opinion.

When you think about it though the scoring doesn’t really matter all that much. Humor Rumor is not really the type of game that you play to win or lose. Just like Telephone it is a game that you play just to have a good time. While highly competitive players will try their hardest to win the game, the game would probably be more enjoyable if the players are just trying to have fun. The game is meant for players to just relax and have some laughs and enjoy themselves. If the players are that serious about winning it is probably not going to be that enjoyable playing Humor Rumor.

Other than trying to add some actual game mechanics to Telephone the other major addition to the game is the most obvious, the contraption. It is honestly hard to describe how truly ridiculous the contraption is. I honestly think there is no way you could play the game and not look ridiculous. Between the oversized ear and lips and the long tube it is hard not to laugh at the other players as they are passing along the story. This is honestly the biggest problem that I had with the game. I generally like silly games but Humor Rumor takes it too far. The game just feels like it was made to make the players look like fools.

Outside of looking ridiculous the contraption only does an okay job relaying the messages. You can clearly hear the message through the contraption. The problem is that it is really hard to find the right volume to tell the story at. Whisper the story too low and the player on the other end won’t be able to hear you. If you talk too loud though it is really easy for the other players to hear the story which defeats the purpose.

Other than the silly contraption I have to say that the components are so reminiscent of the 1960s and 1970s. Just by looking at the box I could tell that the game was made in the 1960s or 1970s. The artwork screams that era and the whole concept of the game feels like something that would have come out of those decades. In addition to the contraption the game comes with 108 word cards with four words on each card. This will give you quite a few games before you have to repeat words. If you ever run out of cards you could easily create your own words to use with the game.

Should You Buy Humor Rumor?

I have to say that Humor Rumor just wasn’t for me. I generally like weird and silly games and yet Humor Rumor was too silly for me. The game is basically Telephone with some additional mechanics to make it feel like more of a game. The idea of each player adding to the story is a nice addition but I think the game could have done more with the scoring system. The scoring system feels kind of random and encourages players to find ways to make the story overly complex to improve their chances of scoring points. I think you are better off just playing without the scoring. What really makes/breaks the game though is the contraption you use to tell the story. For better or worse it is quite noticeable. If you like silly games you might enjoy it quite a bit but otherwise it will make you feel like a fool.

Humor Rumor didn’t really appeal to me. There was not enough to the gameplay and it was just too silly. If you generally don’t like silly games it won’t be for you either. If you really like silly games and the game’s concept sounds interesting to you, I think you could really enjoy Humor Rumor.

If you would like to purchase Humor Rumor you can buy it online: Amazon