To be the first player to move their cat around the game board and back to the doghouse.

Assemble the game board. Each player chooses a cat and the corresponding cat launcher. Each player puts their cat in their cat launcher and places it on one of the four fence posts behind the doghouse. Put Mugs (the dog) on the gameboard by the doghouse facing out into the yard. Choose the first player by any means that you want. 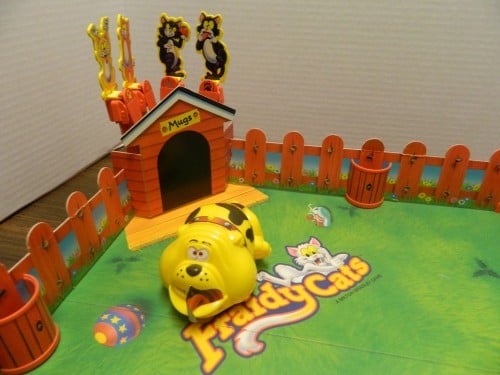 To start your turn you roll both dice. What you do on your turn depends on what you roll.

While moving each fence post counts as a space. Any spaces occupied by other players do not count as spaces. Spaces covered by barrels are counted like normal spaces but provide safety for cats when the dog is activated. While moving from the start space, none of the fence spaces behind the doghouse are counted as spaces. 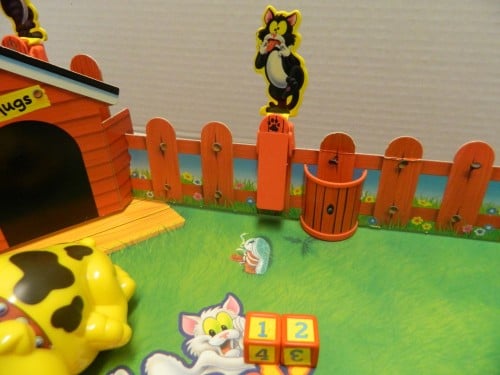 The current player rolled a one and a two. They would get to move their cat forward three spaces as shown.

To activate the dog you press the button on it’s collar. The dog moves around the gameboard. While moving the dog may run into the launcher of one or more of the cats which might launch those cats into the air. Players wait until the dog stops moving. If any player’s cat was flung into the air, the cat is put back into it’s launcher and is moved back to the nearest unoccupied barrel. If more than one cat is launched, the cat that was launched first moves to the nearest barrel followed by the other cat(s) being moved to the next closest barrel in the order that they were launched. If there are no unoccupied barrels behind the cat’s position, the cat is moved behind the doghouse and starts their next turn from the start space. 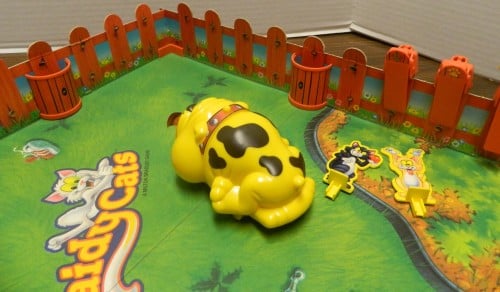 The dog ended up knocking down two cats. The yellow cat was knocked down first so it would be put inside the closest barrel. The black cat would be placed in the barrel to the left.

The first cat to make their way around the entire fence and make it back to the doghouse is the winner. 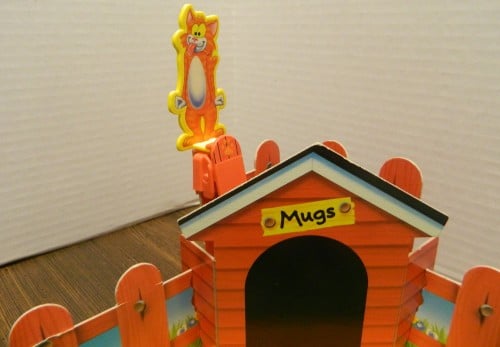 The orange cat has reached the doghouse after making it’s way around the yard. The orange player has won the game.

When I was a young kid I remember playing the game Fraidy Cats quite a bit. It wasn’t my favorite game but I know that I played the game quite a bit. Being a very simplistic game I knew I wasn’t going to like the game that much as an adult. While it isn’t a good game for adults, I still had some fun with Fraidy Cats remembering how much I enjoyed the game when I was a child.

Fraidy Cats is the definition of a roll and move game. You roll the dice and move your piece around the gameboard. There is no strategy or skill in the game unless you are really good at rolling dice. As a matter of fact there are no decisions to be made in the game. The only two things that impact the game is the roll of the dice and if the dog ends up flipping your cat up into the air. You really have no impact on the game and just have to hope luck is on your side.

Usually I hate games like Fraidy Cats where the entire game comes down to luck. You can’t hate Fraidy Cats though because it is quite charming/cute. For some reason it is just fun watching the dog move around the gameboard while hoping that it won’t hit your cat. The dog just adds another luck/random element to the game but it makes Fraidy Cats a better game than most other children’s roll and move games.

Fraidy Cats was made as a children’s game and I think it works really well as one. I really liked the game when I was a kid and I don’t see why kids today wouldn’t like the game. While it doesn’t have any strategy, it is simple enough that younger children can play the game without any trouble. The game is pretty short since most games should take 15-20 minutes to complete. Children will probably really like the cats and dog theme since it is fun watching the dog chase after the cats.

Component wise the game is decent. The artwork is pretty nice and the dog works well since its’ movements are pretty randomized. The problem with the components come from the fence pieces. They are made of cardboard and due to how often the dog runs into the fence, the fence will get damaged from play. The only way you are going to find a copy that isn’t significantly damaged is to find a copy that has been rarely played. No matter how careful you are with the game it just gets damaged too easily. The small knobs that hold the fence pieces together regularly get torn off, and the fence pieces will develop quite a few creases. As long as the contents are in decent shape though you can still usually play the game without issues.

Overall I decided to give Fraidy Cats a 2 out of 5 rating. Since this is a game clearly made for children I had to weigh a couple things for the final rating. As a game for adults Fraidy Cats is just not a good game. The game has no skill, strategy or even decisions to make. You just roll the dice and hope you win the game. For an adult I would give the game a rating of around a one.

Fraidy Cats is a children’s game though so I had to factor that into my rating. The game is pretty cute/charming and I think younger kids would love the game. I know I liked the game when I was a kid. For children I would probably rate the game as a three or four.

If you don’t have any young children, don’t have fond memories of the game from when you were a child, or don’t like quirky kids games I doubt you would like Fraidy Cats. If any of those describe you though I think you could enjoy Fraidy Cats.

. Amazon also has the Crocodile Hunter

version of the game for sale as well.