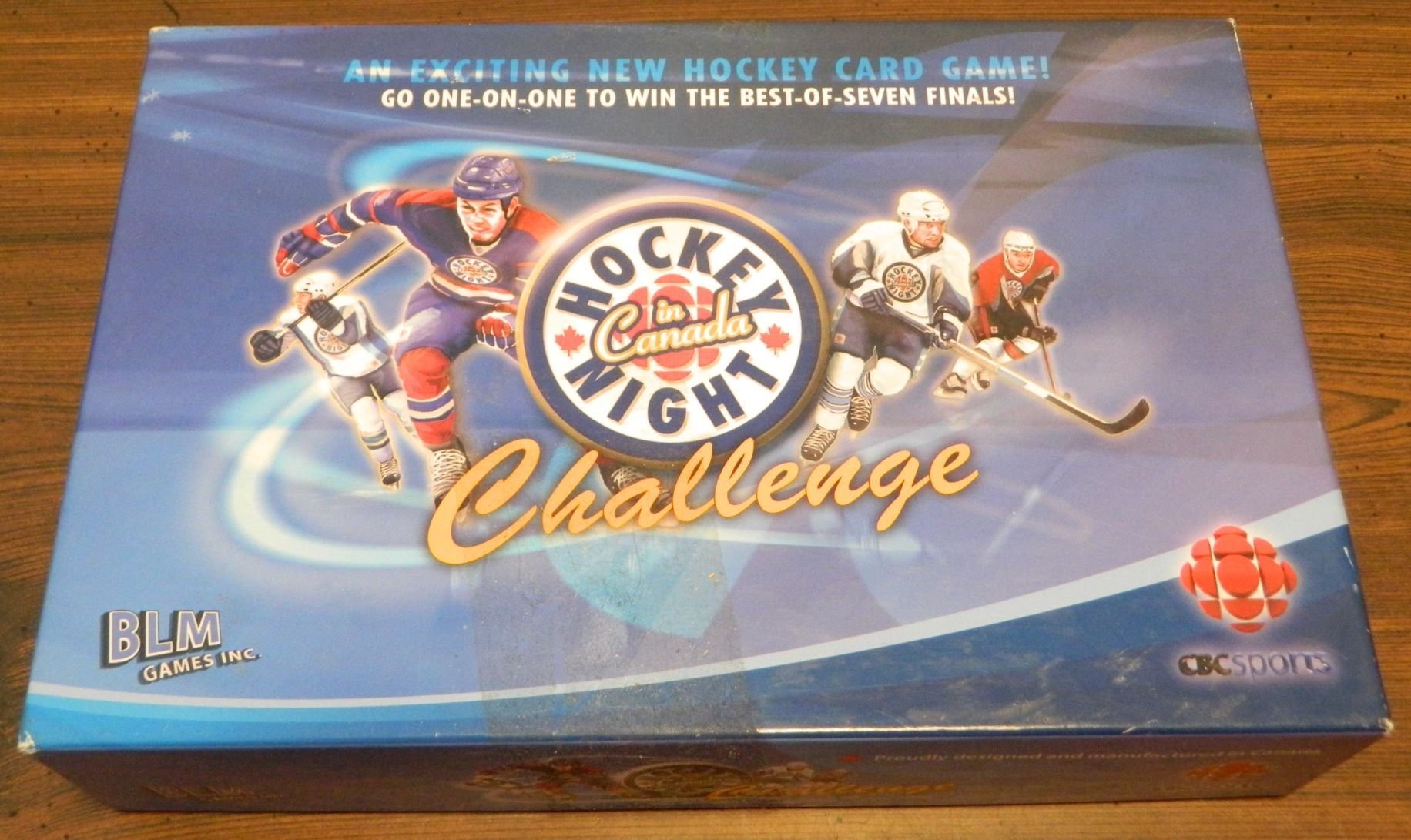 While hockey is not widely considered one of the most popular sports in the United States it still has a pretty dedicated fan base around the world. I personally wouldn’t consider myself to be huge fan of hockey but it is one of the more enjoyable sports to watch. Despite not being as popular as other sports it hasn’t stopped board game publishers from creating over 100 different hockey board/card games over the years. While we have reviewed games on this site with mechanics similar to hockey (more of the air hockey variety) the only true hockey game that we have reviewed was Slapshot. Well today I am looking at another hockey game Hockey Night in Canada Challenge. While I didn’t think the game would be very good, I was hoping for a surprise. Hockey Night in Canada Challenge shares little in common with the actual sport leading to a boring and somewhat broken game.

How to Play Hockey Night in Canada Challenge

Hockey Night in Canada Challenge can be played as a standalone game or as an expansion for Big League Hockey Manager. This section will only go over the rules for the standalone game.

Anatomy of a Player Card

Each player card has a few key pieces of information that will be used in the game.

The number in the top right corner is the player’s power ranking. The higher the number the better the player is. The numbers will range from six to ten.

Some of the cards will have a letter or symbol along the left edge. If there is a R this indicates a rookie. A * indicates a superstar. These designations are referenced in some of the challenge cards.

Finally along the left edge the player’s position will be listed. Players can only play their designated position.

If a player is hurt due to a challenge card their card will be removed from the starting lineup. Their coach can replace them with one of their reserve cards of the same position. If the player doesn’t have another player for that position the player will only have five players for the rest of the match.

The two coaches will then roll a die. Each coach will tally their score based on the number they rolled as well as any effects based on the challenge cards that were played. They will record this score on the score sheet.

The coaches will then play the next period. After all three periods are completed players will tally the score for the match.

After the third period of a match the coaches will add up the power ranking for their starting lineup. If this total is higher than 50 they will place the remainder in the 50+ column on the scoresheet.

The coaches will then tally up the points from each period as well as the 50+ column. The team that scored more points will win the match.

If there is a tie the coaches will roll one die. Whoever rolls the higher number will win the match.

After the match is over all of the used challenge cards will be added to the rest of the cards that weren’t drawn. These cards will be shuffled. The coach that won the match will draw challenge cards until they have seven in their hand. The other coach will draw until they have six cards in their hand. The next match will then begin. Players can reset their lineup (if it was effected by injuries for example). The home team will be determined by the number of the next match.

The first coach to win four matches will win the game.

My Thoughts on Hockey Night in Canada Challenge

Heading into Hockey Night in Canada Challenge I can’t say that I had high expectations for the game. The idea of a hockey card game was intriguing as I had fun with Slapshot. My biggest concern with the game is that it looked kind of cheaply made as it was made by a smaller publisher that has only released various sports board/card games. Then there was the fact that the game couldn’t even get licensing from the NHL or another hockey league. Despite having low expectations I was still left a little disappointed in the game.

Hockey Night in Canada Challenge is a pretty basic/simple game. You begin by picking your team. There isn’t much to picking a team as you randomly draw cards and your only input is the order in which you take the positions. After this the game basically boils down to playing cards and rolling dice. Each period begins with you playing challenge cards. Players take turns playing these cards which give you various benefits like giving you goals, taking goals from the other team, injuring players, and various other effects. After all of the cards for the period have been played you roll the dice which determines how many goals you will score. You end up playing three periods and then compare the strength of the two teams. The player who scores the most goals wins the match. The first team to win four matches wins the game.

Based on that description it should already be pretty obvious that Hockey Night in Canada Challenge is a pretty simple game. You can pretty much explain the game to players within a couple minutes. I can’t see players having any problems understanding the game’s rules as you are basically just playing cards and rolling dice. I honestly don’t know why the game has a recommended age of 9+. Outside of there being quite a bit of text to read on the cards there isn’t anything too complicated about the game that younger children couldn’t play it. This simplicity also means that the game plays pretty quickly. The length is going to depend on how many matches need to be played before someone wins. I would say that most games will only take 20-30 minutes though.

While I appreciate the game’s simplicity I think it leads to a lot of the game’s problems. The problem is that the game is too simple. There is very little actual gameplay in Hockey Night in Canada Challenge. This ultimately leads to a game that becomes boring quickly. Most of the gameplay revolves around playing your challenge cards. This could have lead to some interesting mechanics except for the fact that there is basically no strategy to playing the cards. There are a few counter cards that you have to worry about but otherwise there is no reason not to play all of the cards from your hand that you can actually play. As you will basically replace all of the cards you played for the next match there is no real reason to keep cards in your hand. In many cases you might as well play everything that you can play in the first period as it usually won’t matter what period you play them. Then you just roll the dice to determine how many goals each team will score. The player who scores the most goals will win the game.

The biggest culprit for the game being so boring is that there are no real decisions to make. You play cards and then roll dice. There really is no way to impact your fate in the game. For the players on your team you better hope that you draw high value players for each position as you will have a hard time otherwise. There is no benefit to having a lower valued player and you have no direct impact over what player cards you ultimately draw. Outside of a few challenge cards that reference superstars and rookies your players are mostly only used for the 50+ bonus. Having a high rated team basically guarantees you a couple free points at the end of the match which will likely win it for you. Things don’t get much better for the challenge cards as you randomly draw them as well. The only strategy to playing cards involves reading the other player to determine when to play/avoid counter cards. Finally there is no way to impact what number you roll which is what ultimately determines who wins and loses. Basically the game relies entirely on luck. The player that draws the best cards and rolls the best will likely win the game.

Other than the game just being boring it doesn’t even have much to do with hockey. The hockey theme has no impact on the actual gameplay. Basically the theme is only a light cosmetic touch placed on top of a card game that with a few slight tweaks could have utilized almost any theme. The game does not have the official licensing to any hockey league so all of the player cards are just random hockey players. Other than the pictures of the hockey players most of the rest of the theme comes from the flavor text on the challenge cards. If you are looking for a game tailored to hockey you are going to be disappointed as the game doesn’t at all feel like a game of hockey. Instead it feels like a generic card game with a hockey theme pasted on.

In addition to the theme not being very good I didn’t think the components were very good either. The components are pretty basic. The player cards are bland and the artwork is not that great. The challenge cards aren’t much better as they are filled with a lot of unnecessary filler text which doesn’t add anything to the game. Some of these cards have grammatical errors and some of their abilities are not described all that well. The dice have slightly different distribution than a normal die (0, 1, 1, 2, 2, 3) but are otherwise nothing special. Even the gameboard is pretty bland and doesn’t serve much of a purpose outside of keeping track of how many matches each player has won. I do give the components a little credit though because they can apparently be used as an expansion for Big League Hockey Manager. I have never played Big League Hockey Manager so I can’t give you an opinion of how well they work in this regard. Basically I found the components to be underwhelming.

Should You Buy Hockey Night in Canada Challenge?

I didn’t have high expectations for Hockey Night in Canada Challenge and unfortunately my first impression was quite accurate. The game is quite easy to play and it plays quickly. Unfortunately there are so many problems with the game. The biggest problem with the game is that it relies almost entirely on luck. The few decisions you get to make in the game are usually so obvious that they don’t really matter. Basically the player who draws the best cards and rolls the best is going to win. This leads to a game that is just really boring. Then there is the fact that the game has little to do with hockey. The gameplay doesn’t simulate hockey at all. Playing the game it feels like any other card game and with a few cosmetic changes it could easily have been a game about anything else. The component quality doesn’t help either.

Unfortunately I can’t recommend Hockey Night in Canada Challenge to many people as it has so many problems. Pretty much the only people I could possibly recommend the game to would be people who are really big fans of hockey. Even then I would only consider picking up the game if you can get a really good deal on it.