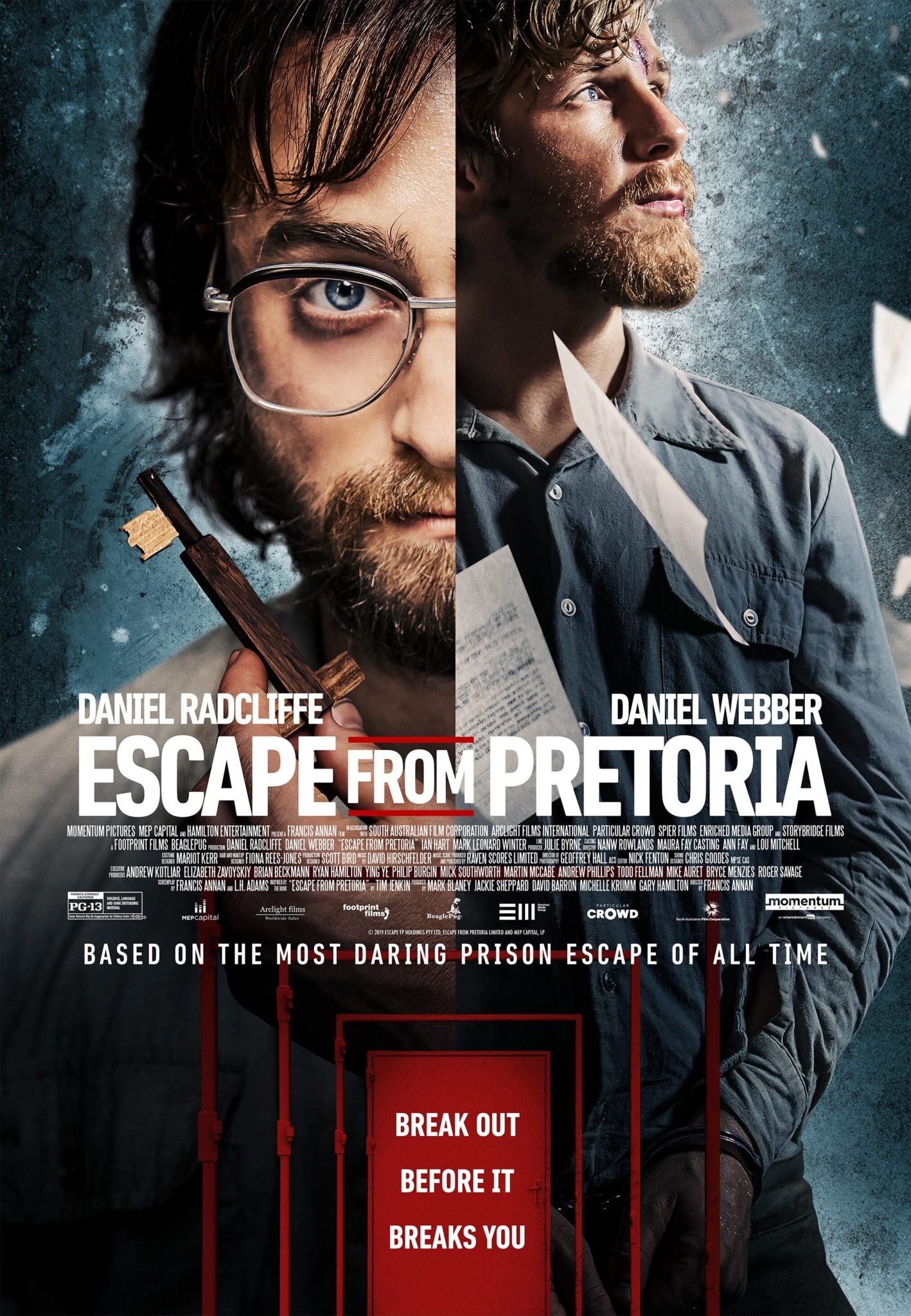 Regular readers of Geeky Hobbies probably already know that I am a huge fan of movies based on true stories. While fiction stories are also entertaining there is just something really interesting about stories based on events that actually happened in real life. In addition to true stories I have also always been a big fan of heist/prison escape movies. What I love about these movies is the execution of a clever plan with lots of twists and the tension that builds wondering whether the protagonists will be successful. For these reasons I was really intrigued by Escape From Pretoria as it combines both genres. The movie is a true story about the plotting and executing of an escape from prison. Escape From Pretoria may not have all of the elaborate twists and turns of your typical prison escape movie, but it crafts a truly compelling and tense prison break story based on true events.

Escape From Pretoria is movie based on the novel Inside Out: Escape from Pretoria Prison written by Tim Jenkin. The movie tells the true story of the escape of Tim Jenkin (Daniel Radcliffe) and Stephen Lee (Daniel Webber) from the Pretoria prison. The story takes place in 1979 South Africa during Apartheid. Tim Jenkin and Stephen Lee are arrested and convicted of distributing fliers for Nelson Mandela’s ANC trying to end Apartheid in South Africa. Sent to jail for twelve and eight years respectively the two men decide that they will try to find a way to escape. They soon develop a plan which involves recreating the prison’s keys out of wood to create their own path out of the prison. Along the way they get help from the other political prisoners including a man named Leonard Fontaine. As they are always being watched they must work in secret as they prepare and practice their escape attempt to perfect it before their final attempt.

As a fan of true story films I have always been a little leery of the words “based on a true story” as they can be misleading at times. Some movies from this genre are loosely based on real stories while others actually do a good job replicating what actually happened. In the case of Escape From Pretoria it appears to be accurate for the most part. This is at least partly due to the fact that it is based on a book written by one of the people involved in the escape attempt. Tim Jenkin and Stephen Lee were real people and they did attempt to escape from the Pretoria prison. The movie also features Denis Goldberg who was also sent to the same prison for helping Nelson Mandela. The only main character that is not based on a real person is Leonard Fontaine as he is more of a combination of the other prisoners that were involved in the escape attempt. Without going into deep research the events of the movie seem to have happened for the most part even if parts might have been exaggerated in order to make for a better movie.

While the idea of a prison escape movie based on real events really intrigued me I was a little cautious as I didn’t know how well it would work. Heist and prison escape movies generally work best when they have really elaborate plans with a bunch of twists that keep you guessing until the last minute. In real life this doesn’t usually happen as the plans are generally much simpler. In the case of Escape From Pretoria this is both true and not true. If you are looking for a really elaborate plan that includes a lot of misdirection and other things that you wouldn’t  actually be able to do in a real prison you may be disappointed. The plan for the most part is quite a bit more straightforward. Despite this fact I have to say that I was still genuinely impressed by the plan as it is one of those that you wouldn’t think would work in real life. If I watched the movie and didn’t know it was based on a real story I wouldn’t have believed that it actually happened.

Escape From Pretoria may not have all of the glitz and the overly complicated plan of your typical prison escape film and yet the movie is still really good. I think the main reason why the movie works is that it does a great job building tension. The escapees don’t follow a complex plan and yet you never know where it is going to go next. The movie does a really good job keeping you guessing about what is going to happen next and whether they are going to succeed or fail. I was genuinely surprised as the movie did a lot better in this area than I expected. The movie may not have all of the shocking twists of your typical film from this genre but it is still a highly entertaining film. Fans of escape films should really enjoy Escape From Pretoria.

In addition to a really enjoyable plot I think Escape From Pretoria works due to the acting. The cast is really good in my opinion. Daniel Radcliffe, Daniel Webber, Ian Hart and Mark Leonard Winter do a very good job. Daniel Radcliffe in particular is great in the main role. I would say that some of the accents are a little hard to understand at times but otherwise I didn’t really have any complaints about the acting. I don’t know how accurate the actors’ portrayals were of their real life counterparts but Tim Jenkin did consult on the movie so I would assume most of the characters were pretty accurate.

I really enjoyed Escape From Pretoria but it does have some occasional issues. The movie has a runtime of 106 minutes and it uses that well for the most part. The movie uses its time well for the most part as it sticks to the main points without going off on tangents. There are a couple slow points though that could have been cut out or diverted to a few areas of the plot that could have used a little more time. This is a pretty minor issue though as it is probably only affects around five or so minutes.

Heading into Escape From Pretoria I had high hopes for the movie and yet it surpassed my expectations. It shares a lot in common with your typical prison escape movie and yet feels unique as well. The overall plan is more straightforward than you typical movie from the genre and yet it still works. The main reason the movie works is that it does a great job building tension. The movie doesn’t have any huge twists, and yet you are kept on the edge of your seat as you wait to see what happens next. If you didn’t know better you would think that the story had to be fiction and yet for the most part the story is actually true. The story is quite good and it is supported by good performances from the actors. The only small complaint I have with the film is that it can be a little slow at times.

Escape From Pretoria will be released in theaters, on demand and digital on March 6th, 2020.