To collect the most fish by the end of the game.

Shuffle all of the ice floe tiles and arrange them in the shape of a square with all of the tiles being arranged in rows. The rows should alternate between being seven and eight ice floes long. When laying out tiles you should try to evenly distribute the two and three fish tiles throughout the entire game board. Each player takes a set of penguins of one color. The number of penguins used in the game depends on the number of players:

During a player’s turn they are able to move one of their penguins. When moving your penguin you can move it as many spaces as you want as long as the penguin moves in a straight line. The penguin cannot move through another penguin or over an empty space in the game board. Penguins also cannot change directions while moving. 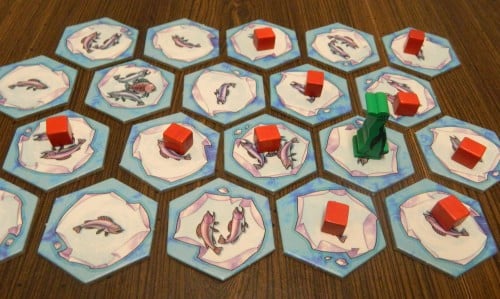 After the penguin is moved, the player takes the ice floe tile that the token was on before moving. These tiles are used as points at the end of the game. 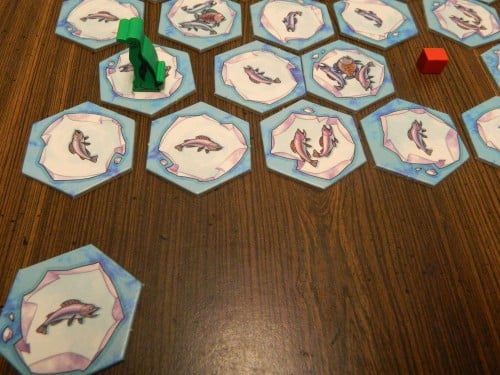 The green penguin has decided to move to the space on the far left side of the game board. The player removes the tile from the space that the penguin was previously on.

When a penguin can no longer make a valid move, they are removed from the board. The player gets to take the tile that their penguin was on. 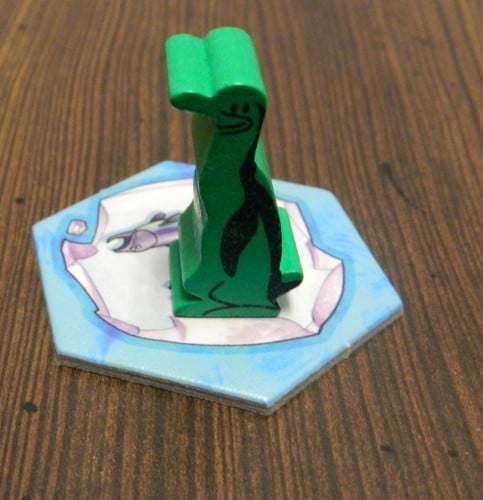 This green penguin can no longer move. The green player will remove the penguin and the ice floe from the table. 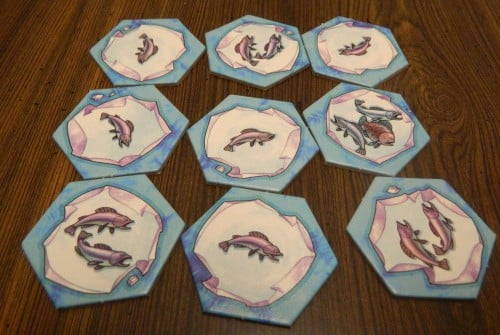 Since it was recently re-released by Fantasy Flight, I decided to take a look at the 2005 game Hey! That’s My Fish! In Hey! That’s My Fish! you play as a group of penguins that are trying to hoard all of the fish for themselves instead of sharing them with the other penguins. Those greedy little penguins. Despite appearing to be simple, Hey! That’s My Fish has a lot more strategy hiding beneath the surface than you would expect.

When I am looking for board games, I always look for games that are simple to play but also contain enough strategy to remain interesting after extended plays. Hey! That’s My Fish fits both criteria perfectly. The game is quite simple to play. The instructions are only three pages long and it might take only a minute or two to teach the game to new players. Since all you do on your turn is move your penguin in a straight line, the game is simple enough that younger children should have no trouble playing the game (the recommended age is 8+).

Just because the game can be played by younger players doesn’t mean that the game doesn’t contain any strategy. There is a surprising amount of strategy to be had in the game. In order to be successful you need to figure out how to move your penguins in a way that keeps them in the game while also finding a way to cut off your opponent’s penguins. You might think that you can just aimlessly move your penguins around the board but you will likely lose since every move can have a big change on the layout of the board. I think the optimal strategy is to try and get your penguin alone on an island that contains as many ice floes as possible. Once your penguin is on an island by themselves they will be able to collect all of the tiles in that island without interference by the other players. This seems optimal since even if the penguin is trapped on a smaller island they don’t have to compete with another penguin that could at any time cut them off from the rest of the tiles.

Quantity of tiles is not the only important thing in Hey! That’s My Fish. Going after the more valuable tiles is usually even more important. For each three fish tile you get another player will have to collect three one fish tiles. It is unlikely that one player will get significantly more tiles than the rest of the players so if you don’t get many of the high value tiles you will probably not win.

While the game is family friendly the game could become cutthroat pretty quickly. While you have a lot of impact on your own game since the game has little luck to it, the other players have a lot more say in your outcome than you would like. If two or more players decide to team up on you, you aren’t going to win the game. If multiple players go after you at the same time, your penguins could get cut off on all sides. Since you can’t block all of the areas at the same time you will likely end up losing out on a lot of tiles. For example in my most recent game two players ended up cutting me off at the same time. Since I couldn’t defend both positions at the same time I was cut off from two large chunks of tiles.

The other issue with the strategy in Hey! That’s My Fish is that it is the type of game that could suffer significantly from analysis paralysis. Since everything is out on the board, players can spend a lot of time trying to analyze what their best move is on every turn. There are so many possibilities early on in the game that players who try to look for an optimal play on every turn could take forever making their move. If you have a player like this you should consider including a time limit so players don’t take forever to make their move.

The biggest problem with Hey! That’s My Fish! is the set up time. While the set up only takes a couple of minutes, it is kind of a pain. While the set up is not very complicated it sometimes takes longer than you would expect to set up all of the tiles so they are lined up properly. The tiles need to be lined up properly or it could make things harder later in the game if players can’t figure out which tiles are in line with each other.

The biggest problem with the set up is that it is kind of hard to try and evenly distribute the two and three fish tiles. While you could take the time to truly distribute the tiles, that would take way too long so you need to just try to make it as balanced as possible. You need to take enough time distributing the tiles though or one player could end up with a huge advantage.

Hey! That’s My Fish is one of those types of games that seems simple at first but has quite a bit of strategy underneath the surface. The game is simple enough that children can play the game but there is enough strategy that adults can stay interested in the game as they try to perfect a strategy. I have had quite a bit of fun with the game and it is a game that I come back to every so often. The game is kind of abstract though and your fate in the game is dependent on the other players so it might not appeal to the hardcore strategy fans.

If you don’t like abstract games you may not enjoy Hey! That’s My Fish! If you are looking for a light to moderate strategy game though I think you can get a lot of enjoyment out of Hey! That’s My Fish! With the game being recently reprinted you can probably find the game for pretty cheap. At the time of this review you can pick up a new copy for around $15.