Collect the most points by killing the most important nobles.

At the beginning of the day a group of twelve nobles are lined up next to the guillotine. The noble closest to the guillotine will be the next noble killed unless a card is played which changes the order of the cards.

During a player’s turn they will follow these three steps:

At the beginning of their turn each player has the option to play one of the action cards from their hand. If a player chooses not to play a card they don’t have to. When an action card is played, players follow the text printed on the card. Playing action cards could earn you points, change the order of the nobles, allow you to draw additional cards, or more. 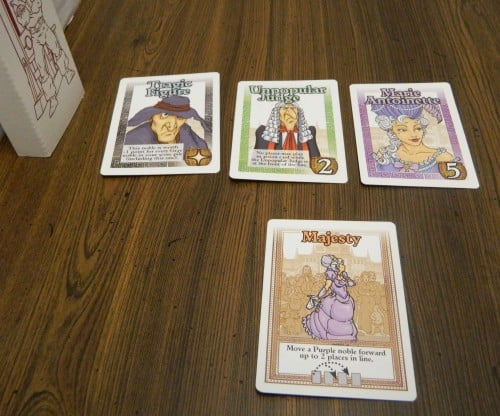 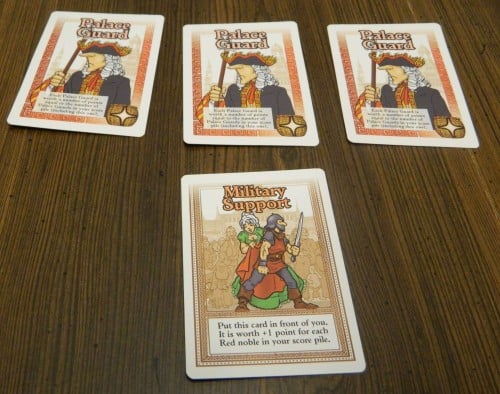 The current player has played the military support card. This card is worth one point for every red noble card that the player collects. In this situation the card would be worth three points.

Collect the First Noble in Line

The current player will collect the first noble in line after they play a card (or chose not to play a card). Each noble card is worth the number of points printed on the card (some cards are worth negative points). Some of the noble cards have text written on them which is to be followed when they are killed or as indicated on the card. The noble that is killed is added to the current player’s stack of nobles and will count for points at the end of the game. 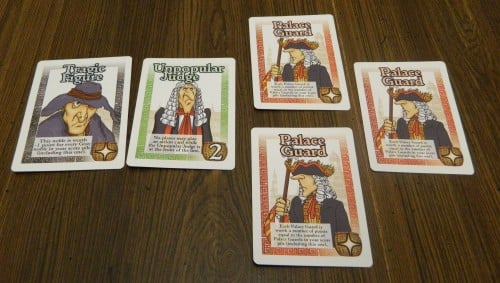 Here is an example of a couple of the special abilities of some of the noble cards. The tragic figure card is worth -1 point for every other gray card owned by the player. The unpopular judge restricts players from playing any cards on their turn if he is the noble at the front of the line. The Palace Guards are worth as many points as there are Palace Guards in your scoring pile. Therefore you want to try and collect Palace Guard cards.

At the end of a player’s turn they draw an action card even if they didn’t play a card during their turn.

End of a Day

After a player has drawn a new action card, play passes to the player on the left. Play continues until all of the nobles in line have been killed or a special ability ends the day early. The next day begins with players keeping all of the action cards in their hands as well as all of the nobles in their point pile. Twelve new nobles are placed out in line just as they were at the beginning of the game. The player to the left of the player who started the previous day gets to start the next day.

After the third day is completed, the game ends. Players count up all of the points in their score pile taking note of any bonus points from text written on the noble cards or any action cards played by the player. Whoever has the most points wins the game.

Back in 1998 Wizards of the Coast came up with an interesting theme for a card game. Guillotine is a card game that takes place during the French Revolution and focuses on the nobles that were beheaded. Each player plays as a different angry citizen that wants to get revenge against the evil nobles that had taken advantage of them. The goal of the game is to collect the heads of the most hated nobles in order to score points that will help them win the game. While the theme will turn off some people, Guillotine is a simple to play and learn card game that is a blast to play.

Let’s talk about the theme first in order to get it out of the way. Since the game is based around events that actually happened, I can’t blame people that are offended by the theme. The goal of the game is after all to kill a bunch of people by cutting off their heads. The game tries to take a comical/non-serious look at the theme but it will still offend some people. The game is more of a PG-13 type game instead of an adult game. It should be pretty obvious that Guillotine is not for children though. The violence in the game is only implied and you could imagine something else is happening other than chopping off people’s heads.

This gets me to the question of what was the point behind the theme. The theme really has no impact on the gameplay at all. You could easily paste any other theme on the game and it wouldn’t play any differently. The only reason I could think of for the theme is the opportunity for humor. While I didn’t find the game to be particularly offensive, I didn’t really find it to be funny either so I question why the theme was even chosen.

Despite the questionable theme, Guillotine is a good card game. The game is easy to play and learn. You could probably teach the game to a new player within minutes since the most difficult part of the game are the special abilities printed on the cards. Players could just read the cards to see what they do so the game doesn’t have much of a learning curve. The simplicity makes Guillotine a great filler game.

While not the most strategic game, Guillotine does have some strategy to it. Players need to figure out how best to use their cards to position the nobles to score the most points. While there would have been more strategy if you could have played multiple cards on your turn (more on this later), how you use your cards will have both an impact on what nobles you take as well as the other players.

This is where the action cards come into play. The action cards are kind of hit or miss though. While I like most of the cards, a couple are a little too powerful in my opinion. While all of the cards can help you in the right situation, it is obvious that some cards are more powerful than others. Unfortunately this inequality between the cards adds quite a bit of luck to the game.

For example one card allows a player to stop every other player from playing a card that will alter the order of the nobles. This essentially gives one player the ability to affect all of the other players forcing them to take noble cards that they otherwise wouldn’t have taken. This player gets to choose how long the card stays in play so they can remove it whenever it no longer helps them.

The other action cards I didn’t really like were the cards that give you bonus points based on the color of cards you have collected. I actually like the idea behind these cards since it makes you play the game more strategically but there are not enough of them in the deck. I am not suggesting that the deck should have been filled with these cards but with so few of them whichever player gets them has a pretty big advantage over the other players. It is too bad that these cards have such an impact on the game since I like the idea behind them and wish the game had more reasons to try and collect cards of certain colors.

The biggest issue I had with the game is that you can only play one card on your turn. While I am guessing the developers thought it would be too powerful to let players play multiple cards on their turn, I think it would have improved the game quite a bit. With only being able to play one card per turn, players are too much at the mercy of the cards drawn. If you draw good action cards or the noble cards line up well for you, you will be at an advantage over the other players.

If players were able to play multiple cards on their turn, I think a lot of the issues with luck could be resolved and there actually would be quite a bit more strategy in the game. In the game I played there were many instances where I wanted to play several cards since they would have worked well together. Since you couldn’t play multiple cards on a turn though, I ended up playing none of them since they didn’t work nearly as well by themselves.

The one card limit is kind of strange since there is no reason not to play a card on your turn unless all your cards will hurt you. Since you will always draw a card at the end of your turn, your hand size will never go down. If you don’t play cards all you are doing is increasing your hand size which is pointless since you can only play one card per turn. The next time I play the game I think I am going to try and see how the game plays if you are allowed to play multiple cards on a turn.

Despite having a somewhat morbid theme, Guillotine is a good card game. The game is quick and simple to play which makes it a great filler game. While luck plays a big role in the game, players do have some impact on their fate based on how they decide to play their cards. I just wish you could play multiple cards on a turn which would have made the game more strategic.

If you find the theme of the game to be questionable or don’t generally like card games you probably won’t like Guillotine. If you like more traditional point/set collecting card games and you don’t mind the theme I think you will actually enjoy the game quite a bit. At this time the game is also pretty cheap at only around $12.