To be the player who gains control over all of the stacks of cones.

Each player takes four cones of their chosen color and places all four on top of one another on the corresponding start space for their color. All of the players pop/roll the dice. Whoever rolls the highest number gets to go first. Play proceeds clockwise. 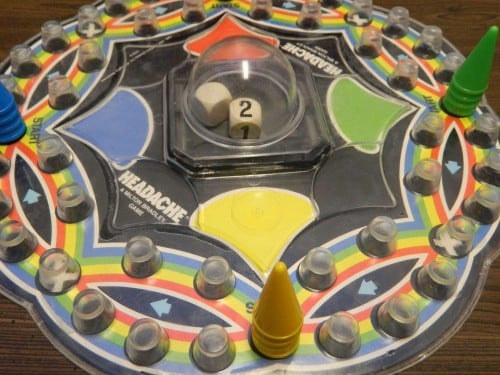 The game has been setup with all four pawns of each color being placed on the start space for their color.

To start their turn a player pops the popper. The player will get to move one of their pieces the number of spaces rolled. If the color die lands with the red side up the player gets an additional turn. 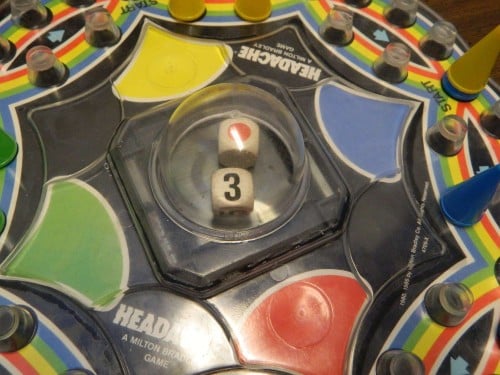 The player has rolled the red symbol. This player will get an additional roll after they move one of their pieces.

For each player’s first four turns they must move a different one of their pieces from their start space. After each piece has been moved once, players can choose which piece they would like to move on their turn. Movement in the game must follow these rules:

When one player has control over all of the stacks of cones on the game board, they win the game. 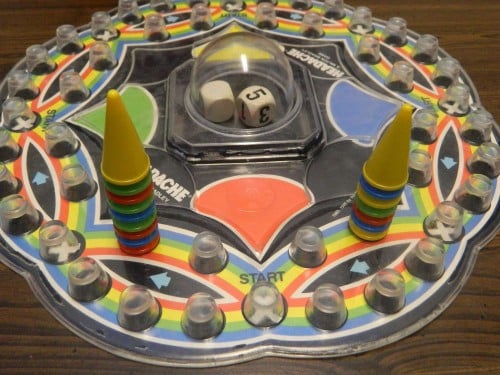 The yellow player has won the game since they have control over the two stacks of cones still left in the game.

As I child I don’t ever remember playing the game Headache. I definitely remember the Pop-O-Matic dice popper from games like Trouble and like most children I loved it. While the games are not exactly the same, Headache does share quite a bit in common with Trouble. Since I loved Trouble as a child I thought I might as well give Headache a chance to see if it was any good. Like most children’s games though Headache is a very bland luck driven roll or should I say pop and move game.

Basically all you do in Headache is use the Pop-O-Matic to roll the dice and then move one of your pieces the corresponding number of spaces. The game plays a lot like Trouble where players try to land on the other players’ pieces. In Trouble this sends the other players’ pieces back to their home space setting the player back. In Headache though if you land on another player’s piece you capture it and control it for the rest of the game. Also unlike Trouble players are trying to gain control over all of the pieces instead of trying to get all of their pieces to the finish line.

While I haven’t played Trouble since I was child (so it probably isn’t nearly as good as I remember it being), I have to say that Headache is not a very good game. The main problem with the game is that it just relies way too much on luck. While strategy can slightly help you in the game there is no way you can win the game without luck being on your side. The game pretty much comes down to rolling the right number in order to land on one of the other player’s pieces. Whoever is the best at doing this is going to win the game. Outside of cheating there is no way to influence the dice.

The only real strategy in the game is to try to position your pieces to maximize their chances of capturing other player’s pawns. The key to this is to quickly get stacks of cones. This is crucial since being able to move in either direction is huge in the game. After the first couple rounds the single cones become pretty worthless since they have little chance of capturing other pawns because they can only move in one direction. Basically once you get some stacks that can move both directions you can just start following behind single stacks and capturing them when possible since they can’t move backwards to capture you.

Players keep rolling the dice and moving their pieces until there are two players left. These two players then try to position themselves in a way where they improve their chances of capturing their opponent and reduce the chances of their opponent capturing them. Usually this leads to one player running away while the other player chases them. The only strategy you can use in this situation is when you get a bonus turn you should try to place your piece in a position where you can roll two different numbers to capture the other player’s piece since you are then doubling your chances of success.

Outside of rolling the right numbers at the right times, luck also comes into play with regards to getting bonus turns and the turn order. Turn order makes a pretty big impact in the game since if you get to move earlier you will have a better chance of capturing other player’s pieces before they are able to capture yours. The bonus turns are crucial in the game especially late. The bonus turns are really powerful late in the game since they let you use one of your turns to position one of your pieces for your bonus turn where you will likely be able to capture the piece you are targeting. The main reason I won the game is that I got quite a few bonus turns towards the end of the game.

Since the game relies so heavily on luck, it should come as no surprise that there are huge swings in momentum in the game. In the game I played I started off strong, was then almost eliminated, and eventually ended up winning the game. One roll of the dice can move someone from first to last or even out of the game. If a player is especially unlucky they can be eliminated from the game within minutes. This isn’t that big of problem since the game should take less than 15 minutes to play but there is a problem with the game if a player can be eliminated almost immediately.

For those of you who have played Trap the Cap, Headache should seem quite similar. Headache plays like a more simplified version of Trap the Cap. Trap the Cap is a considerably better game than Headache for a couple reasons. First the game has a lot more flexibility with regards to movement since there were a lot more directions that you could move your pieces in. This allows you to mitigate some of the luck and use more strategy. I also liked that the objective of Trap the Cap is to take captured pawns back to your base to score them. This added a little strategy since the last player remaining doesn’t automatically win the game just by capturing the other pieces on the board. With these rules a player could win the game without being lucky enough to be the last player remaining in the game.

As an adult game, Headache is just not a very good game. There is just so little strategy in the game and it relies almost entirely on luck. There are just so many other similar roll and move games that have more strategy and thus are better games. These issues just make Headache a really boring board game. While the game is not particularly great for adults it could work well with children and parents playing with younger children. Headache’s greatest strength is that it is simple and quick to play. Headache could work well as a roll and move game for children that adds just enough strategy that it could help teach young children to play games in a more strategic way.

Headache is just not that great of game. It relies way too much on luck to the point that you can’t win the game without luck. You pretty much just roll/pop the dice and hope that you get lucky and roll the right number in order to be able to capture the other player’s pawns. It just isn’t that fun for adults and I really can’t recommend the game to adults outside of adults playing with young children or because they have fond memories of the game from when they were a child.

Now while I didn’t really like Headache, I could see younger children and their parents enjoying the game. The game is simple to play and has a little strategy to it which could be used to help younger children start thinking about strategically playing board games.

The Invention Game Board Game Review and Rules
Click here to cancel reply.

I got hung up on this game as an adult player because it does not make clear what is a legal or illegal move to make while its being played, I thought i could move in both directions at the same time or capture myself when playing for the first time.

It made me run out of patience within 3-4 rounds of play, i never played again after that.