To grab the most worms and place them into your own nest.

Snap one of the birds into each side of the game board. The rest of the setup is dependent on what version of the game that you play.

While Early Birds has several different versions that you can play, in all of the versions the objective is to use your bird to move worms from the center dish into your own nest. Players twist and turn their bird in order to position its’ beak in a way to grab the worms. The player then pushes the trigger on the handle of their bird which closes its’ beak. After grabbing a worm the player turns their bird in order to drop the worm into their own nest. 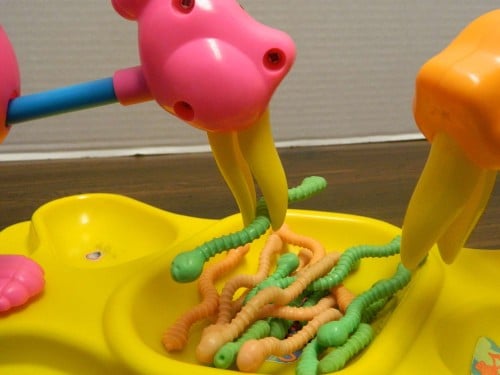 All of the worms are placed into the bowl in the center of the game board. Players count to three and begin grabbing worms at the same time. Once all of the worms have been grabbed the game ends. Whoever grabs the most worms wins the game. 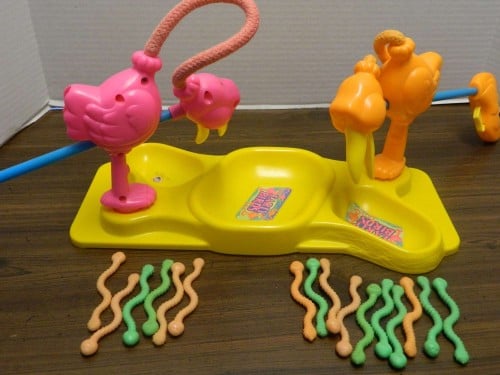 The orange bird grabbed ten worms and placed them in their nest while the pink player only grabbed six worms. The orange player would win the basic version of the game.

Hi-Low Worm Grab plays the same as the basic game except that each orange worm is worth two points while each green worm is worth one point. Whoever scores the most points wins the game.

Worm Wrench is played almost the same as the basic game. The only difference is that each orange worm is worth 2 points while each green worm is worth -2 points. Whoever scores the most points wins the game.

Each player gets the same number of orange and green worms. The worms are placed to the side of each player’s scoring nest. Players take turns dropping one of their worms into the center dish. Both players try to grab the worm and put it into their nest. When one worm is grabbed the next worm is put out. Each orange worm is worth two points while each green worm is worth one point. Whoever scores the most points wins the game.

Looking at Early Birds you might think that the game looks pretty stupid. The game consists of players controlling birds that are trying to pick up worms. There is essentially no strategy to the game and the game doesn’t require a lot of skill since both players are just hoping to get lucky enough to pick up a worm. Early Birds is pretty much your typical 1980’s Parker Brothers children’s game. With all that said you would think Early Birds is a terrible game but is actually quite a bit better than you would think.

I have played Early Birds a couple times and have actually had more fun with the game than you would expect. There is just something about odd children’s action/dexterity games that make them still fun for adults. I can’t really put my finger on why but Early Birds is just fun to play. It is fun trying to control the bird contraptions while trying to pick up and move worms into your nest. If you like these quirky children’s games you should have fun with Early Birds.

While I actually had more fun than I was expecting with the game I have to say that there is a big caveat to go with that statement. While Early Birds can be fun, it is only fun in really short doses. The typical game of Early Birds lasts around 2-3 minutes. The game is fun enough that you will likely want to play a couple more games. After a couple games though you will likely tire of the game. I would say that the game remains fun for around 10-15 minutes before it gets boring and repetitive. I just don’t see adults wanting to play the game for more than the 10-15 minutes at a time. Early Birds is the type of game that you play for 10-15 minutes and then put away for a while and come back to after some time has passed.

While the game is pretty fun to play it does have some issues. It is really easy to cheat in the game (more on this later) and the game seems to rely more on luck than skill. Players who are better at controlling their bird have an advantage in the game but no one is going to play the game enough where acquired skill is really going to come into play. The winner is going to come down to who gets lucky and grabs worms quicker.

Another issue with the game is the fact that it is only a two player game. If you have more than two players some of the players will have to sit and watch. Games go by quickly which means that spectators don’t have to wait that long but I don’t know why the game couldn’t have been a four player game.  Games like Hungry Hungry Hippos and other similar games had no trouble making their games four players and I think having four players playing at the same time would have made the game more enjoyable.

Intentionally or unintentionally it is really easy to cheat in Early Birds. Outside of the variations where you are punished for getting green worms it is actually pretty easy to cheat without even noticing it. When trying to grab a worm it is really easy to just drag a bunch of the worms back to your nest using your bird’s beak. While some people will purposely do this in order to get an unfair advantage in the game, you can do it pretty easily without really even noticing since you are just focused on picking up as many worms as possible. Outside of having a ref watch the game and put back any worms that were dragged into nests, there isn’t a lot you can do about the issue.

Another way players could cheat is by taking worms out of or putting worms into the other players nest. The two nests are actually just close enough to one another that a player could actually grab worms from the other player’s nest if they are on the edge of the nest. This could add a little strategy to the game since players could try to steal worms from the other player, instead of going for the worms in the center dish. Also in the variations where the green worms are worth negative points a player could actually try stuffing green worms into the other player’s nest in order to make them lose points. If both players agree to allow these actions they can actually make the game a little more interesting but are kind of cheating if both players don’t agree to using them.

Despite being a game that takes quite a beating I have to say that the game was pretty well built since the used copy I found at a thrift store still works quite well. The plastic pieces will take a beating which includes scratches and scuff marks but unless you are unnecessarily rough with the game I think it will actually last. The bird grabbers actually work quite well and give players quite a bit of flexibility on how they can twist and turn in order to pick up worms. The worms also work quite well and are quite durable. I have to give credit to Parker Brothers for creating a pretty durable game which is important for a children’s game.

I have one issue with the components though. While the birds are quite sturdy, they are very hard to remove from the base when you have finished playing the game. Since the game board doesn’t fit into the game box if you don’t remove the birds you have to fiddle with them quite a bit in order to separate them from the game base. The last time I played the game they took so long to remove from the base that I could have played the game two or three times in the amount of time that it took to get the birds off.

Looking at Early Birds you would think it was a typical 1980s children’s game and it is. If you have kids that like these action/dexterity type games I think they would have quite a bit of fun with Early Birds. While the game is far from fantastic, I have to say that I had more fun with the game than I was expecting. The game has no strategy, relies highly on luck, and each game only lasts a couple minutes but the game for some reason is still pretty fun. The problem though is that Early Birds is only fun for 10-15 minutes at a time. It is the type of game that you play for a short period of time and put away for a while before you decide to play the game again.

Go For Broke Board Game Review and Rules
Click here to cancel reply.