How to Play Goofy Golf Machine

Goofy Golf Machine is a 1994 Parker Brothers board game that combines miniature golf (that can be played on a tabletop) with Mouse Trap and Rube Goldberg machines. The game is basically played like miniature golf but instead of the player with the lowest score winning, in Goofy Golf Machine the winner is the player who collects the most chips (by winning holes outright, ties award no chips) after all nine holes have been played.

Due to the type of game it is, Goofy Golf Machine unfortunately starts with quite a bit of assembly. The first time you play the game it will probably take you at least five to ten minutes to read the instructions and assemble the game correctly (future plays should take significantly less time because you will be more familiar with the assembly). The assembly isn’t overly complicated but if you buy the game for younger children, you will probably at least have to help them out some of the time (if not assemble it all yourself).

After assembly, Goofy Golf Machine begins with each player deciding which color scoring marker they want on the score card. The youngest player goes first and play passes to the left around the Goofy Golf Machine. Many of the holes involve the elevator so before those holes make sure to reset the elevator and press down the corresponding hole switch (for example, for hole #1, press down the “1” side of the switch).

After the elevator is reset (if necessary for the hole you are on), the first player places the ball on the correct tee, lines up their shot with the putter, and takes their first stroke. Each player gets three tries (strokes) per hole to get the ball into hole. If they are successful, they slide their color marker on the score card to record how many strokes it took (if they made it on their second shot, they move it to the “two” slot). If they are unsuccessful on all three attempts, slide the marker to “miss.” All players play the same hole and when everybody is done, the player who has the best score for the hole wins a chip. However, if two or more players tie for the best score, no chips are given to any player (the hole is a draw). After scoring is done for a hole, slide each marker back to the starting position before starting the next hole. 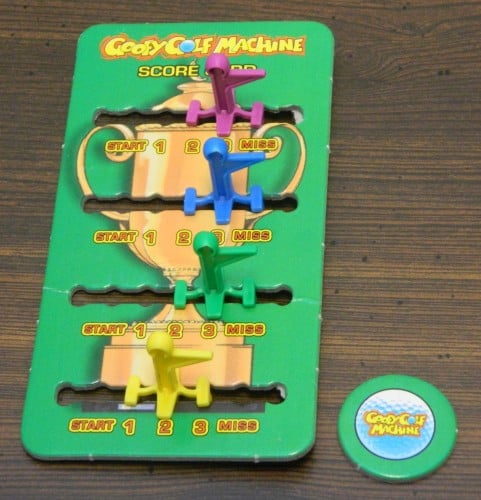 For this hole, the purple, blue, and green players all took three shots to get the ball into the hole. Since the yellow player got it in two shots, they win a chip. However, if even just one other player would have matched the yellow player’s two for the hole, no chips would have been given out.

Play continues in the same way for the first eight holes. The game doesn’t say who starts subsequent holes (most likely the youngest player is supposed to start each hole) but we played it as the winner of the previous hole gets the slight disadvantage of starting the next hole. The ninth hole is scored slightly differently. If your ball lands in a hole marked “1” you get to take one chip. If you are skilled or lucky enough to get it into the hole marked “2,” you get two chips. Your turn ends as soon as you get the ball into one of the holes or you have failed to get the ball into a hole after three tries (in which case you don’t get a chip at all).

After the nine hole is completed, all players add up their chips. The player with the most wins the game. If two or more players are tied, the tied players compete in a sudden-death shootout. All tied players start again on hole #1 and the first player to earn one chip wins the tiebreaker and the game.

Pictures and brief descriptions of each hole in Goofy Golf Machine: 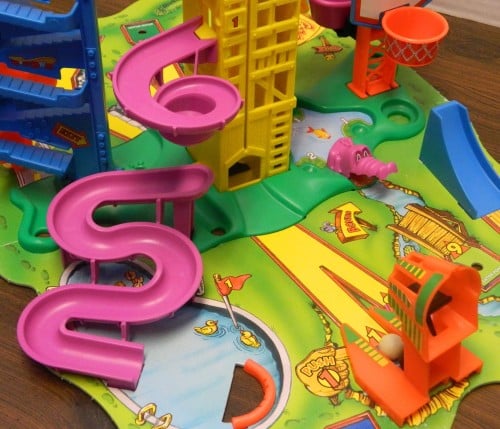 Hole #1 (Water Slide)-Players must attempt to shoot the ball into the elevator. The elevator will take the ball up a floor and it will fall into a spiral piece and then a purple water slide. As long as the ball winds up in the swimming pool “hole,” the hole is complete. 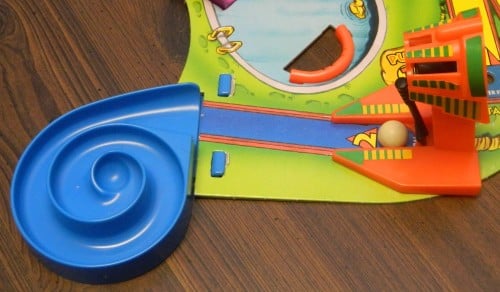 Hole #2 (Spiral)-Shoot your golf ball into the blue spiral but make sure you put enough power into your shot (but not too much) so that it stops in the hole in the middle of the spiral. 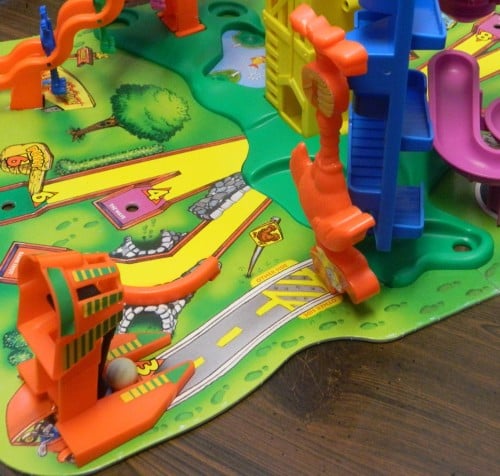 Hole #3 (Chicken Crossed the Road)-Somebody swings the chicken back and forth and the golfer tries to shoot it past it into the hole. This is pretty much like the windmill holes in actual miniature golf courses. 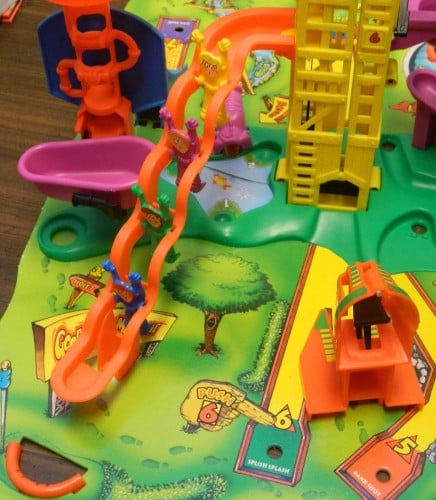 Hole #4 (The Wave)-Shoot the golf ball into the elevator and it will go down a contraption, knock down four people figures, and should land in the hole. 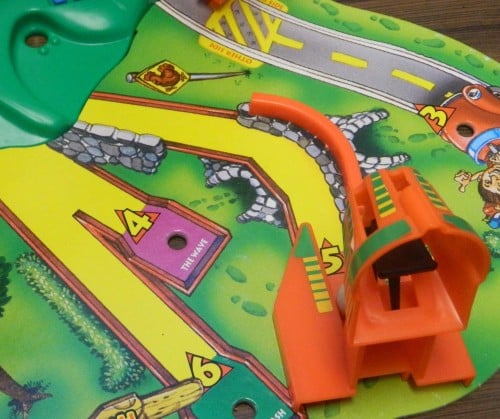 Hole #5 (Bank Shot)-For this hole, you must shoot at an awkward angle using a plastic piece to bank your shot towards the hole. 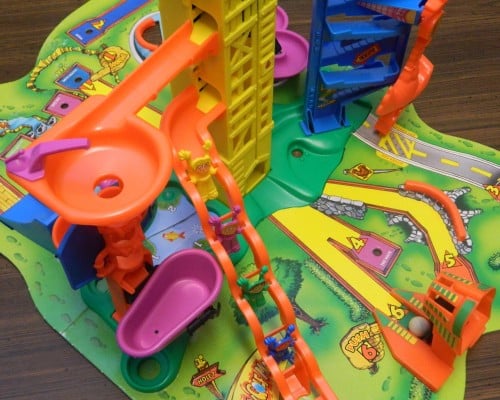 Hole #6 (Splish Splash)-Another hole that mostly just involves shooting the ball into the elevator and watching the game do the rest. This time, the ball will roll around a drain, eventually go down it, and fall into the hole. 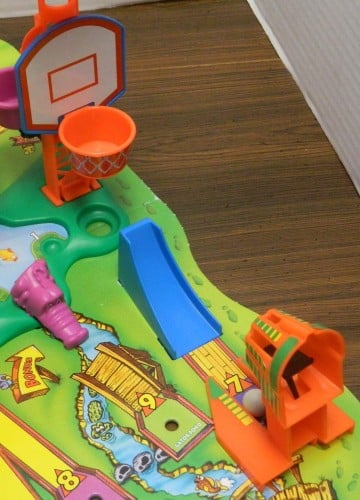 Hole #7 (Slam Dunk)-One of the few holes that actually requires some skill. Players shoot the ball up a ramp towards a basketball hoop. If they successfully make their basketball shot, they complete the hole. 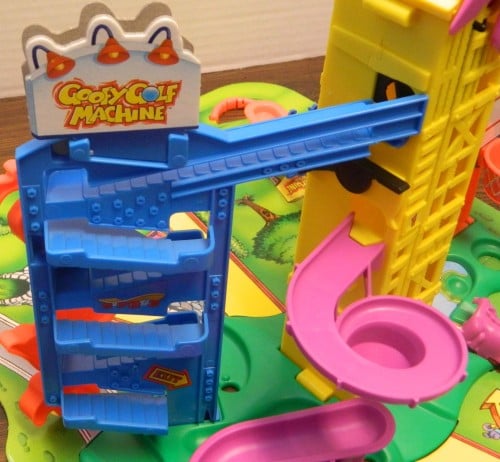 Hole #8 (Zig Zag)-Shoot the ball into the elevator and the ball will go down a set of zig-zaging stairs into the hole.

Hole #9 (Gator Pond)-Shoot the ball through the gator head and if it lands in either a “1” or “2” hole you get to take that many chips and you have completed the hole. If the ball doesn’t make it through the gator head or doesn’t land in one of the three holes, you will have to try again (but if you are unsuccessful for three tries you won’t get a chip at all).

I was nine when Goofy Golf Machine was released into stores and I had a copy as a child. It wasn’t one of my absolute favorite games as a kid (I would say Loopin’ Louie and Jumpin’ Monkeys were my favorites) but I am relatively nostalgic about the game. Upon revisiting the game as an adult, I found the game to be pretty unique and definitely better than most Parker Brothers and Milton Bradley games from the ’80s and ’90s. However, it definitely isn’t a great game by any measure. It’s solid but not spectacular.

The main reason I gave Goofy Golf Machine an average two-and-a-half out of five is the fact that only a few of the holes take actual skill to do well in. Four of the nine holes are completed by just successfully shooting the ball into the elevator (outside of an occasional malfunction, if you get it into the elevator it will fall into the hole). Most of the rest take some skill but not a whole lot. The only holes I would say are “tough” are the basketball one and the spiral since you will have to put the right amount of power into your shot to get the ball into the hole (too much power can lead to failure). Since most of the holes don’t really take a lot of skill to do well in, Goofy Golf Machine is almost more like a Rube Goldberg machine toy than a board game. Overall, Goofy Golf Machine is very easy for adults but probably just slightly easy for kids.

To get all of the negatives out of the way (there are a solid amount of pros to Goofy Golf Machine as well and I’ll get to them later), the game also takes five to ten minutes to assemble the first time you play and you will almost certainly have to help younger children with the assembly if not do it all yourself. However, subsequent plays should be a lot quicker to setup. Also, players will have to either keep moving around the table or floor or you will have to rotate the entire game board to let other players attempt each hole (not a big deal just a minor annoyance). Goofy Golf Machine also has one of the worst rules I have ever seen in a board game (which thankfully can be changed easily). Not surprisingly it is the tied hole rule where nobody gets a chip if two or more players tie for the lead on a hole. I know the game wanted to be easy for children and tried to keep the scoring simple but why not just score the entire round like normal miniature golf (except with a maximum of three shots or you get stuck with a four for the hole to prevent players from falling too far behind)? In the game I played, we had ties on almost all of the holes so it is very possible that a player could struggle on all but one or two holes and still wind up winning the game (if they just so happen to win a hole or two outright and most of the other holes wind up tied) whereas they could be five or more strokes off the lead if it was scored like regular golf. If I ever play Goofy Golf Machine again, I will definitely just score the game like normal golf.

While there are definitely some negatives to Goofy Golf Machine, there are also some pretty nice positives to the game. First of all, the game is very unique. It attempted to bring miniature golf to the tabletop and it actually did a pretty good job of it. The “machine” works surprisingly well (other than the bird that another player has to swing), if you get the ball into the elevator, it will work right almost 100% of the time. The pieces are plastic but I would say they are still pretty high quality and unlikely to break or deteriorate.

Goofy Golf Machine is also a pretty quick game to play and very flexible in terms of time and number of players. While the score card only has slots for four players, you can easily play with as many players as you want (including just by yourself) and score the game on pen and paper instead of the score card that comes with the game. While the course isn’t as challenging as I’d like, it will definitely appeal to children because it is quite colorful and fun to watch the ball go down the Rube Goldberg-esque machine. Also, while the game is easy for adults, it is probably about the right difficulty for children.

If you are into dexterity or unique board games, Goofy Golf Machine is worth a look if you can find it at a thrift store or rummage sale on the cheap. If you have kids, they will probably have quite a bit of fun. Also, for people my age who had it as a child, I’m guessing the game is pretty nostalgic (it is for me anyway). However, the game doesn’t have a ton of re-playability since you can easily learn the course and the holes will become even easier. Recommended but only on the cheap.