Shuffle the cards and deal seven to each detective. The rest of the cards are separated into equal sized stacks with one stack being placed on each of the numbered rooms. Each player chooses a playing piece and puts it in the living room. Each player rolls the dice with the highest roller getting to play first.

Players can win the Columbo Detective game in two ways. 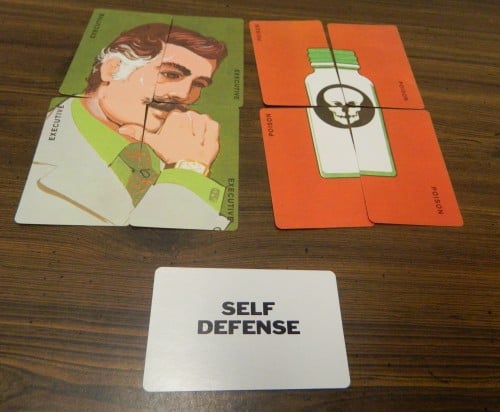 This player has completed a suspect, and a weapon. They have also acquired a motive so they will win the game.

A player can also win the game by collecting all six Columbo cards along with a “It’s A Mystery To Me” card. Once a player has all of these cards they can lay them out and they will win the game. 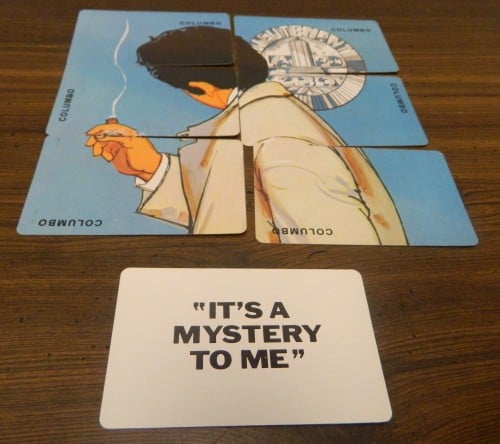 This player has won the game because they have acquired all six Columbo cards as well as a “It’s A Mystery To Me” card.

On a player’s turn they roll the dice and move the corresponding number of spaces. The player needs to move all of the spaces rolled unless they enter a room. Rooms can only be entered and left through the corresponding door spaces. Rooms count as a space while moving. Players can move in any direction on the game board but they can’t move over the same space twice in the same turn. If a player rolls a seven, eleven or doubles they can move their playing piece to any room in the house and they can even re-enter the room they are currently in to draw another card. 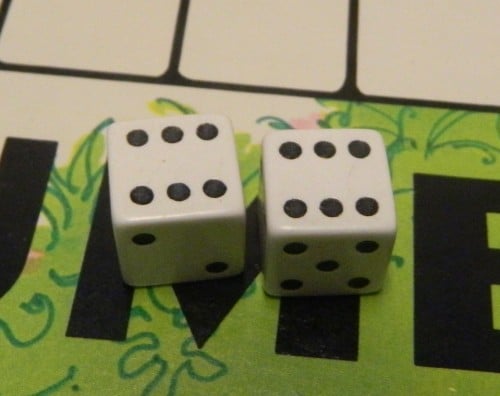 Since the player rolled doubles, they can move to any room on the board.

When a player enters a room (other than the living room) they can take one of the cards located in that room (if the room has any cards remaining). They draw the top card from the pile and add it to their hand. If the player has seven or less cards they get to keep the card and don’t have to discard a card. If they have eight cards though they have to discard one of their cards to the lawn (somewhere on the table off the game board). Before putting the card on the table face down, the player has to show it to all of the other players. Unless the player rolls a seven, eleven, or doubles the player cannot re-enter the same room on their next turn. 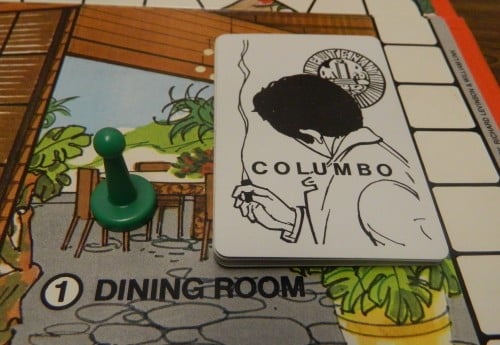 Taking Evidence From Other Detectives

If a player lands on the same space (by exact count) or a room occupied by another player, the player has the option of questioning that player for a piece of evidence. 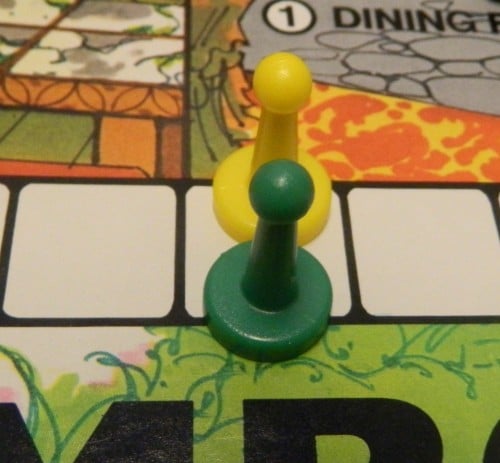 If the challenged player does not have the card that was asked for, they have the opportunity to ask the challenging player for a card in the same manner. All of the rules regarding challenging apply to this challenge as well 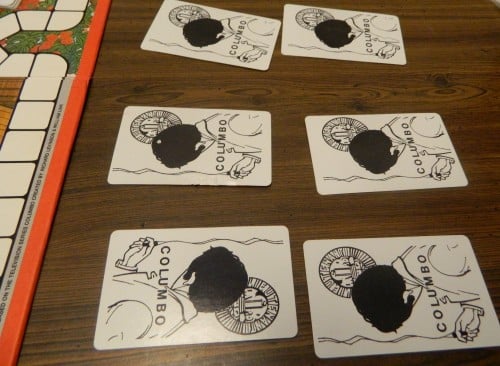 Here is a picture of the lawn. If a player wants one of the cards from the lawn they will need to correctly guess the card that they point towards.

To search the lawn the player first has to show a card from their hand of the type of card that they are looking for. They then point to the card on the lawn that they want. If the card is the type of card they were looking for they get to keep it but they have to discard a card if they now have eight cards. If the player guessed right they can continue trying to take more cards from the lawn. If a player is looking for a motive or a “It’s A Mystery to Me” card they don’t have to show one of them from their hand.

If the player chooses a card that doesn’t match what they are looking for, they swap the card from their hand that they showed for the card that they chose. The player’s turn then ends.

No Cards Remain in the Rooms

Eventually the game might reach a point where no cards remain in any of the rooms other than the lawn. If this happens, all players move their playing pieces to the living room and the rules for the game are altered.

The game ends when one of the players achieve one of the winning conditions. If a player completes a suspect and a weapon as well as holds an evidence card they win the game. The player also wins if they collect all six Columbo cards and the “It’s A Mystery To Me” card.

In three player games you need to remove two sets of suspect cards, and one set of weapon cards.

If you want a more difficult game you can use the advanced rules. Whenever a card is discarded in the game, the player does not show it to the other players. The game ends in the same way as the normal game but players accumulate points during the game which determines the ultimate winner of the game. Points are awarded as follows:

The roll and move mechanics in the game are pretty pointless. All the dice rolling does is add luck to the game and makes the game last longer than it needs to. Moving around the house is meaningless since you have no idea what cards in which rooms. You just have to randomly select a room to enter hoping that the top card is a card that you need. You don’t know what is in any given room so it doesn’t really matter which room you end up entering.

The roll and move mechanics are also pretty pointless because you end up rolling sevens, elevens and doubles so often that you can choose to move to whatever room you want regularly in the game. The only impact the rolling really has on the game is determining when you can try to take cards from the other players. The roll and move mechanics of the game are so unimportant that the game mostly ditches them after all of the cards have been taken from the rooms. The dice roll is only used to determine what a player can do on their turn. I actually think the game might be better if this was the rule for the whole game since it would cut out a lot of wasted time moving through the house that doesn’t really add anything to the game itself.

One way to fight against this stalemate is to use “no clue” cards. If you are in one of these situations they work pretty well since they can stall the other player. The problem is that they are just a stop gap since the player can just come back the next turn and take the same card again. When you play a “no clue” card you are pretty much telling all of the other players that you have one of the cards that were asked for. This means that any player that needs that card can target you in another round and take the card from you.

The final major mechanic in the game is memory. This is the key component in the game in my opinion. Unless you are lucky enough to get all of the cards for a given weapon or suspect before they get discarded you will have to start digging through the lawn for discarded evidence that you need. Now you wouldn’t think that it would be that hard to remember where the necessary evidence was placed on the lawn. Early in the game it isn’t that hard. The problem is that unless you commit to your suspect and weapon right away in the game, it becomes really hard to remember where any particular piece of evidence was put out on the lawn. Towards the end of the game there can be close to twenty cards out in the lawn and because you are distracted by playing the rest of the game, it is really hard to remember where any given card is.

The problem with the lawn is that to try and get a piece from it, you are putting one of your own cards at risk. For example if you are only one card away from completing a set you better be sure you know which card is the last card that you need because if you are wrong you will be two cards away from completing the set. Most games are going to come down to who remembers the cards in the lawn the best since you likely won’t find all of the cards you need from other players or from the rooms. Therefore a good memory is key in doing well in the game. Most likely the player with the best memory is probably going to win the game.

Since I have never watched an episode of the show, I can’t really comment on how loyal it is to the TV show. Other than the game featuring Columbo, the game just seems like a traditional deduction/memory game with the theme of Columbo being pasted on. The game mechanics don’t really make a whole lot of sense with the theme either. I don’t know why detectives would be discarding evidence randomly onto the lawn, going after different suspects for the same crime, or why they would steal evidence from one another. The Columbo Detective Game is the type of game where you probably shouldn’t put too much thought into the theme.

Overall I would say that the Columbo Detective Game is a below average roll and move/deduction/memory game. The game has some interesting ideas and could have been an above average game. I had some fun with the game but a lot of the mechanics have issues. If someone specifically asked me to play the game I would probably play it but otherwise I don’t think I would ever play the game again.