These instructions assume you have a basic understanding of the rules of football. If you are not familiar with the rules of American football, you will need to check out another article for more information.

GoLong Football Dice Game is played over four quarters with four possessions in each quarter. 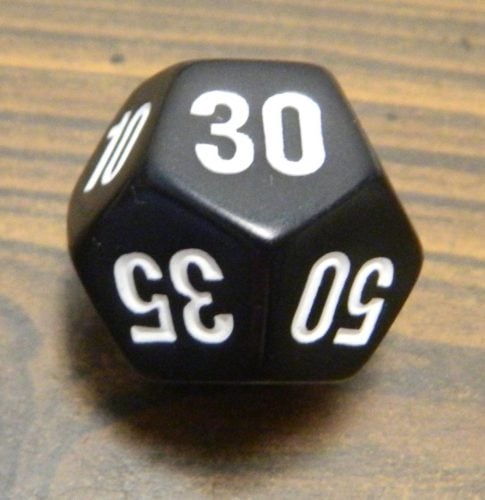 This player rolled a 30 on the kickoff return die so they will begin their possession on their 30 yard line.

When the player starts their turn on offense they roll the white die, the three green dice and the blue die. The player looks at the white die to determine whether their offensive play was successful. If a football was rolled on the white die the player is able to use one or more of their dice to gain yardage. If any other symbol was rolled, check out the appropriate section below.

If the player gains enough yardage for a first down they get a new set of downs and will get to re-roll all of the dice. 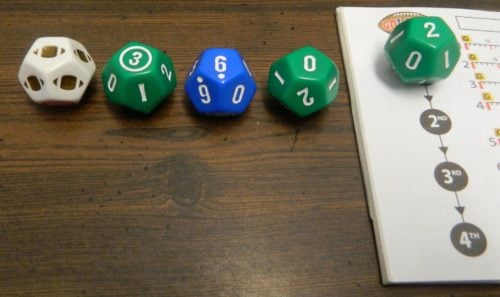 For first down this player chose to keep a two die. They then re-rolled all of the dice. If they choose to use the three and six dice for second and third down they will get a first down. 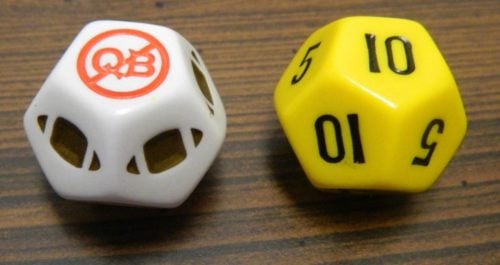 This player’s quarterback was sacked. They lost ten yards on the play.

The defensive team has committed a five yard penalty.

If the hand symbol is rolled on the yellow die, there was pass interference on the play. If the offense committed the penalty the offensive team loses ten yards. If the penalty is on the defense the penalty is either ten yards or the number on the blue die (whichever is higher).

If the double sided arrow is rolled, there were offsetting penalties on the play. The offensive player re-rolls all of the dice and play continues like normal.

Since the double sided arrow was rolled, the two teams committed offsetting penalties. The current down is repeated.

If the red star is rolled on the white die, there is a potential turnover on the play. If “TD” was rolled on the blue die, there was an interception returned for a touchdown. Otherwise the offensive player rolls the red die to determine who will get the ball.

If an “O” is rolled the team on offense keeps the ball and chooses one of other dice that were rolled to determine how many yards they gained on the play. The player then re-rolls the rest of their dice.

If the defensive player gets a turnover on the last possession of a half, they get an additional possession to try and score more points.

If the player on offense hasn’t gotten a first down in the first three downs they can choose to punt. To punt the ball they roll the black die. The number rolled indicates how many yards the ball was punted. If the field goal post is rolled the kick was a touchback and the other team gets the ball at their 20. If the “X” symbol is rolled, the punt is blocked and the other team gets the ball at the prior line of scrimmage. 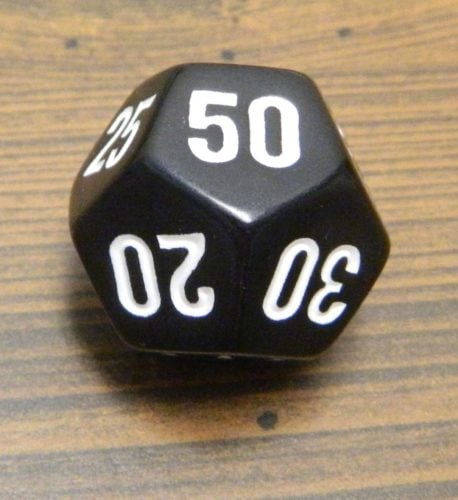 This player rolled a 50 on the punt die so the punt will travel 50 yards.

If a player chooses to kick a field goal they will roll the black die. If the yardage on the dice matches or exceeds the yards to the goal line, the kick is good and the offense scores three points. If the player rolls the field goal post, the kick is also good. If the player did not roll a high enough number or rolled the “X” symbol the kick is blocked/missed. The other team gets the ball at the previous line of scrimmage. 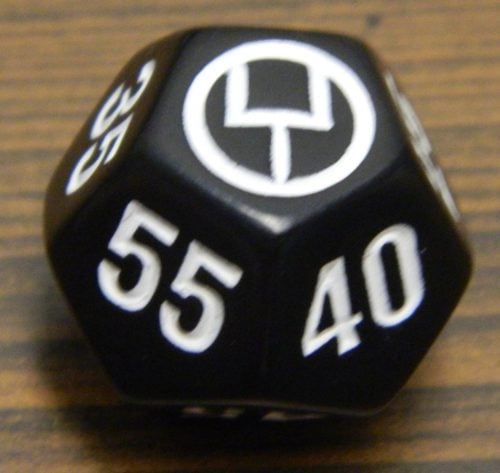 If a player gains enough yards to reach the end zone or rolls a combination that leads to a touchdown, the player on offense scores six points. To kick the extra point the player rolls the black die. If they roll anything other than the “X” symbol, the extra point is good and the player scores another point.

This player has decided to go for two. They rolled a football and a three so they successfully completed the two point conversion.

The game ends after the players have completed all four quarters. The player who has scored the most points wins the game. If there is a tie at the end of regulation, the players play overtime by giving both players one possession. This continues until one player has scored more points.

At its’ core GoLong Football is a pretty basic dice game that has adopted a football theme. You basically roll dice and try to score more points than the other player. As you are mostly just rolling dice, GoLong Football is a really simple game. Probably the most difficult part of the game is understanding the rules of football. For people not familiar with the sport, most of your time will be spent teaching them the basic rules of the sport. Otherwise the mechanics are pretty straightforward as you just roll dice trying to get enough yards for a first down. In addition to being easy to play, the game is also pretty quick. You should be able to finish most games of GoLong Football within 30-45 minutes.

While technically sound I think the biggest problem that I had with GoLong Football was the fact that it is really boring. Basically all you do in the game is roll the dice trying to gain at least ten yards in order to get another set of downs. If you succeed you do the same thing all over again. This is repeated over and over until the game finally ends. There are occasional turnovers, sacks and penalties but they don’t add a lot of excitement to the game.

Another reason why the game is boring is that there are few decisions to make in the game. At the beginning of each set of downs you roll all of the dice. You are then given the choice of choosing to keep one or more of the dice. This decision is generally pretty obvious. If you rolled more than ten yards you are obviously going to keep all of the dice that will get you the first down. If you don’t roll ten yards you should only keep the higher number(s) you rolled and then re-roll the rest of the dice. Honestly it usually is really obvious what you should do at any given time.

All of this leads to GoLong Football being a a simple dice game that relies almost entirely on luck. Roll well and you will do well in the game. Roll poorly and you have no chance of winning. There is so little decision making in the game that there are few opportunities for strategy in the game. With next to no strategy in the game, you don’t have the opportunity to overcome bad luck while rolling the dice. If you want a game that you don’t have to put a lot of thought into that also relies on a lot of luck, GoLong Football might not be bad. If you want a game where your actions actually have an impact on the outcome though, the game is not going to be for you.

While the GoLong Football Dice Game has some problems, I actually think the game does a pretty good job with the components. The dice are pretty nice as the symbols are engraved into the dice which means they won’t fade off with extended use. The dice cup is also pretty nice and the game comes with a travel bag which is useful if you plan to travel with the game. I will say that the scoresheets could be better though as it is kind of hard to keep track of where the ball is at any given time.

GoLong Football is a pretty basic dice rolling game with a football theme pasted on. You roll dice to run plays trying to score more points than your opponent. The game is easy to play and plays pretty quickly. There really isn’t anything wrong with the game on the technical side but the game is just boring. You mostly just roll dice in order to get a first down which allows you to roll more dice. The player on defense doesn’t even get to do anything as they just sit around waiting for the other player. Even the player on offense doesn’t get to make many decisions as any decision they make is usually pretty obvious. This leads to the game relying almost entirely on luck.

If you love football and want a simple dice rolling game that utilizes a football theme, you may have some fun with GoLong Football. I would only recommend picking it up though if you can get a good deal on it as there are better football board games. Otherwise I would recommend passing on GoLong Football as it is a pretty boring dice game.

If you would like to purchase the GoLong Football Dice Game you can find it online: Amazon