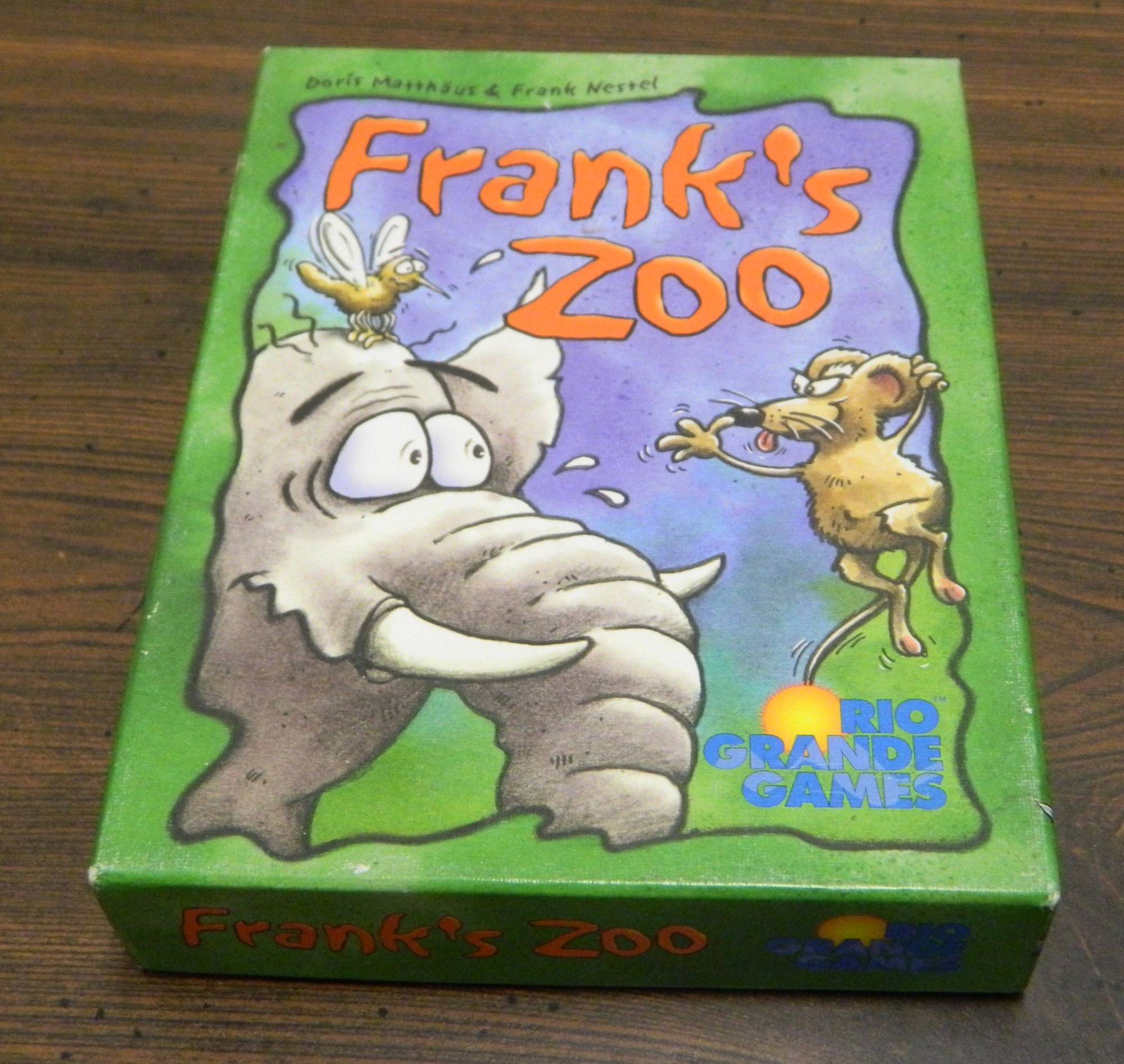 One of the most popular card game genres is the trick taking game. Honestly I wouldn’t consider myself to be a big fan of the genre. I don’t really know why but there is just something about it that doesn’t really appeal to me. The genre is not terrible but I haven’t played a game from it that has really jumped out to me. I was hoping that would change with Frank’s Zoo as it is rated quite high on Board Game Geek. While Frank’s Zoo is a solid trick taking game, it fails to do anything that really makes it stand out.

How to Play Frank’s Zoo

Shuffle the cards and deal all of them out to the players. The player to the left of the dealer will start the game.

Each card in the game has two main areas. The bottom of the card and the two top corners feature the card’s animal. Above the large picture of the animal there will be one or more smaller animals featured in a bubble. These are the animals that outrank the animal featured on the card.

There are a couple unique cards in Frank’s Zoo. The joker card acts as a wild and can be used as any other animal. A player begins a round by playing one or more cards of the same animal. The next player clockwise then has to try and beat the cards that were played. A player can beat previously played cards in two ways:

If a player cannot play a higher ranked set of cards or chooses not to, they pass their turn. If a player passes they can still play cards later in the round. A round ends when the top ranked set of cards are the cards played by the current player on their previous turn. This player has won the round. They collect all of the cards played and they get to start the next round.

When a player plays the last card from their hand, they are out for the rest of the hand. If a player wins a round and has no cards remaining, the player to their left starts the next round. Players continue playing until only one player has cards remaining.

The first player to run out of cards will score one point for each player. The second player will score one less point and so on. The player who still had cards remaining, receives no points.

After playing the first hand players can choose to play with partners. Partners will be chosen based on the current standings of all of the players:

The player that is in last place starts the hand. During gameplay the lower ranked player can ask their partner for help. On their turn they can play cards face up on the table and ask their partner for the cards they need to outrank the current cards. The other player can choose to play cards from their hand in order to beat the current highest ranked set of cards. If the partner helped out and the set of cards wins the hand, the lower ranked player gets to add the cards to their win pile. If the partner can’t help or doesn’t want to help, the player takes the cards back into their hand and they have to pass their turn.

The rest of the gameplay is the same except when it comes to scoring. First each player will score points for their position in the hand along with the position of their partner. If a player doesn’t have a partner they will score four points in addition to the points for their own position.

Players will also score points based on the cards they have in their wins pile. Players will score individual points as follows:

Before the next hand players add their new points to their previous totals. Players will get new partners based on their current ranking.

The game ends when at least two players have scored 19 or more points. Whoever has the most points wins the game.

My Thoughts on Frank’s Zoo

When I first saw Frank’s Zoo it looked like a trick taking game which was made for more of a family audience than a hardcore gaming group. I came to this assumption because generally games that feature animals have more of a family focus and that feels like the case for Frank’s Zoo as well. While the mechanics of trick taking games are usually not that complicated once you get used to them, I wouldn’t consider the genre to be great for younger children. Figuring out the trump suit along with the other mechanics makes the games harder for younger children to grasp. Instead of focusing on trump suits Frank’s Zoo has players comparing different animals. On your turn you either have to play the same number of a higher ranked animal (which is shown on every card) or play more cards of the same animal. This is much easier to grasp which makes Frank’s Zoo work better with children and people that don’t play a lot of trick taking games.

While the game might be simpler to approach, I wouldn’t say Frank’s Zoo has less strategy than other trick taking games. While the game limits what cards you can play on any given turn, there are still quite a few decisions to make in the game. When there are multiple different cards that you can play you have to choose which one will either win you the trick or give you a good chance to play again if someone improves upon the cards you played. When making this decision it can be quite helpful to keep track of what cards have already been played since each animal has only five cards. If you can remember which cards have been played you know what can still be played later in the hand.

Before playing the game I was confident that the best strategy was going to be to keep and play cards in groups. Playing more cards at a time does let you get rid of cards faster after all. After playing the game I have to say this doesn’t work as well as I expected. Being able to play several cards at a time lets you get rid of cards quicker and makes it easier to win a trick. There aren’t a lot of opportunities to play several cards at the same time in the game though. The only way to increase the number of cards played at a time is to play the same animal that the previous player played. In this case you are still only able to play one more card than they played. This means that is it unlikely that a player is going to play more than two cards at a time. If you want to play multiple cards at a time you are probably best off starting a round with them to make sure you can play all of them together. While it is nice being able to play multiple cards at a time, sometimes it is better to just play cards individually since it gives you more flexibility.

The thing I liked most about Frank’s Zoo is the fact that almost every card seems to have its’ own strengths and weaknesses. While some cards are obviously better than others, every card has at least one beneficial quality. In a lot of trick taking games there is a hierarchy of cards with the bad cards only redeeming quality being that there could be even worse cards. I really appreciate games that give each card some benefit because it helps minimize some of the luck of being dealt bad cards. With the weaker cards having some benefit they have some use in the game.

The fact that all of the cards have another card that can beat it (outside of the killer whale) creates an interesting side effect. In a lot of these trick taking/counting games, players keep playing cards making the set to beat more powerful until it reaches the most valuable suit/number combination. With almost every card having a weakness though, this process seems to cycle a couple times as a weaker animal can be played against a stronger animal. For example the top group of cards can get up to elephants and then a player can play mice cards which are weaker cards so the cycle can begin again. I actually liked this back and forth mechanic as it made playing cards more interesting as each round twisted back and forth.

While giving each card a strength against another animal does balance out the luck a little, like every card game Frank’s Zoo still relies heavily on luck. You could be by far the best player but that won’t help you if you aren’t dealt a good hand. Even though the weaker cards have more power than usual, there are still tiers of cards in the game. If you are a dealt a lot of the higher tier cards you have a big advantage in the game. If you are dealt a lot of the lower tier cards you are going to have a hard time getting rid of cards.

One thing I found interesting about Frank’s Zoo was the ability to play the game in pairs after the first round. While you can play with the normal rules for the entire game, the partner rules do bring a twist to the game. Playing with another player is interesting as you have two players that have to work together in order to improve both of their positions. Giving cards to each other at the beginning of the hand lets the players consolidate sets of cards. The higher ranked player being able to help out their teammate also allows players to create more valuable sets of cards which lets players get rid of their cards quicker.

I think the most interesting part of the partner rules though come from the tweaks to the scoring. Scoring points for your place and your partner’s place encourages players to work together so both players maximize their score. At the same time though the individual scoring encourages players to be selfish. You want both you and your partner to go out quickly but you want to get most of the cards into your own wins pile. When I first read about the individual scoring rules I thought they felt a little random. When you think about them though they are interesting as they lead players towards making decisions that they otherwise wouldn’t make. Players will try to get rid of lions early in the game so they don’t get stuck with them in their hand. Players will also try harder to win tricks that feature lions and hedgehogs since it helps them score/avoid losing points.

As far as the theme is concerned Frank’s Zoo is a little hit and miss. The artwork on the cards is fine and to the point. After playing the game though I was left thinking that the theme was kind of pointless. Trick taking games generally don’t have much as far as theme is concerned. That holds true for Frank’s Zoo as well. Why exactly do some animals outrank others? The rankings kind of feel like a food chain thing but that doesn’t make sense for all of the cards. Then you factor in that some are land animals while others are water animals. Why would these animals be even interacting with one another? All I was left with was that Frank is a terrible zookeeper.

Should You Buy Frank’s Zoo?

If you would like to purchase Frank’s Zoo you can find it online: Amazon